The Rim of Fire and the "Impending" Mega-Earthquakes: Look past the inflammatory headlines

Every few years (or months) there is a flurry of activity, and everyone gets hot and bothered and worried that the world is about to come apart. There's concern, even panic, and then things settle down a bit and the subject gets forgotten for another couple of years (or months).

Oh, you thought I was talking about earthquakes? No, I was talking about media storm ABOUT earthquakes. There have been a couple of bad earthquakes this week, truly tragic events, including the 7.8 magnitude earthquake in Ecuador that has killed hundreds of people. There were smaller, but still deadly events in Japan. As a result, stories are making the rounds in the media concerning the Ring of Fire, and the possibility of an impending mega-earthquake...somewhere. Some other place is about to get it, the stories suggest.

Is there something strange going on? Are these earthquakes omens of future events? The answers: no, and probably no. The problem in the media treatment of earthquakes is that writers of these stories have a bit of knowledge, and a bit of knowledge can lead to problems. People have heard of the "Ring of Fire", and figure that it is a single geologic unit to the extent that if something happens somewhere along the Ring of Fire, it will have an immediate cause and effect on some other part of the Ring of Fire. It's a misconception.

Geologists use the term Ring of Fire as a convenience to describe a variety of different tectonic boundaries around and within the Pacific Ocean region. The trenches and subduction zones do not behave as a single coherent unit, and thus a large earthquake or volcanic eruption along one convergent boundary does not mean the impending destruction of another part of the "ring". The problem is that when a large event does take place, like the Ecuador event, then people suddenly pay attention to all the magnitude 6 earthquakes that take place within a few days or weeks and draw the conclusion that all of the events are related. They are almost assuredly not.

The problem is that magnitude 6 earthquakes are happening all the time, often in isolated regions, so they receive less attention on a day-to-day basis. But throw in a near-magnitude 8 event, and suddenly all the magnitude 6 events seem to be a frightening coincidence, and they feel related, as if one is causing the other. 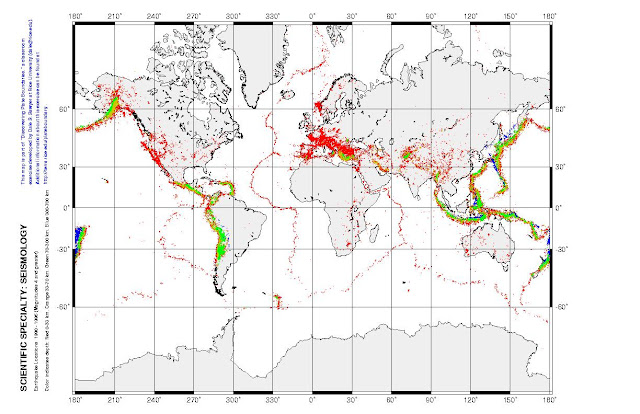 Can earthquakes be an omen of a future event? Yes, they can. In the same way that a stick crackles and pops before it snaps in two, foreshocks can indeed be a harbinger of an impending quake. The foreshocks are not recognizable as such until the main quake happens (they're no different than run-of-the-mill earthquakes), so they can't be used to predict major quakes. But when they do occur, they are precursors to a larger quake in the same general area, along the same subduction zone.They are not predictors of quakes across oceans.

Mega-earthquakes (magnitude 8 or 9) may also set off earthquakes elsewhere, by triggering movement on faults that are already stressed to the breaking point. This isn't happening right now either. We haven't had a quake that big.

So, the take-away is this: could a gigantic earthquake, worse than the tragedies in Ecuador and Japan, take place, say, tomorrow? Sure. If it happens, is it related to these other events? Probably not. And media writers really need to put aside the temptation to put inflammatory click-bait titles on their reports about future mega-earthquakes. Panic and stress are not good combinations in earthquake country. Accurate information, on the other hand, will save lives.