Want a Wilderness Experience in Zion Canyon? Go Where the Trams Go. 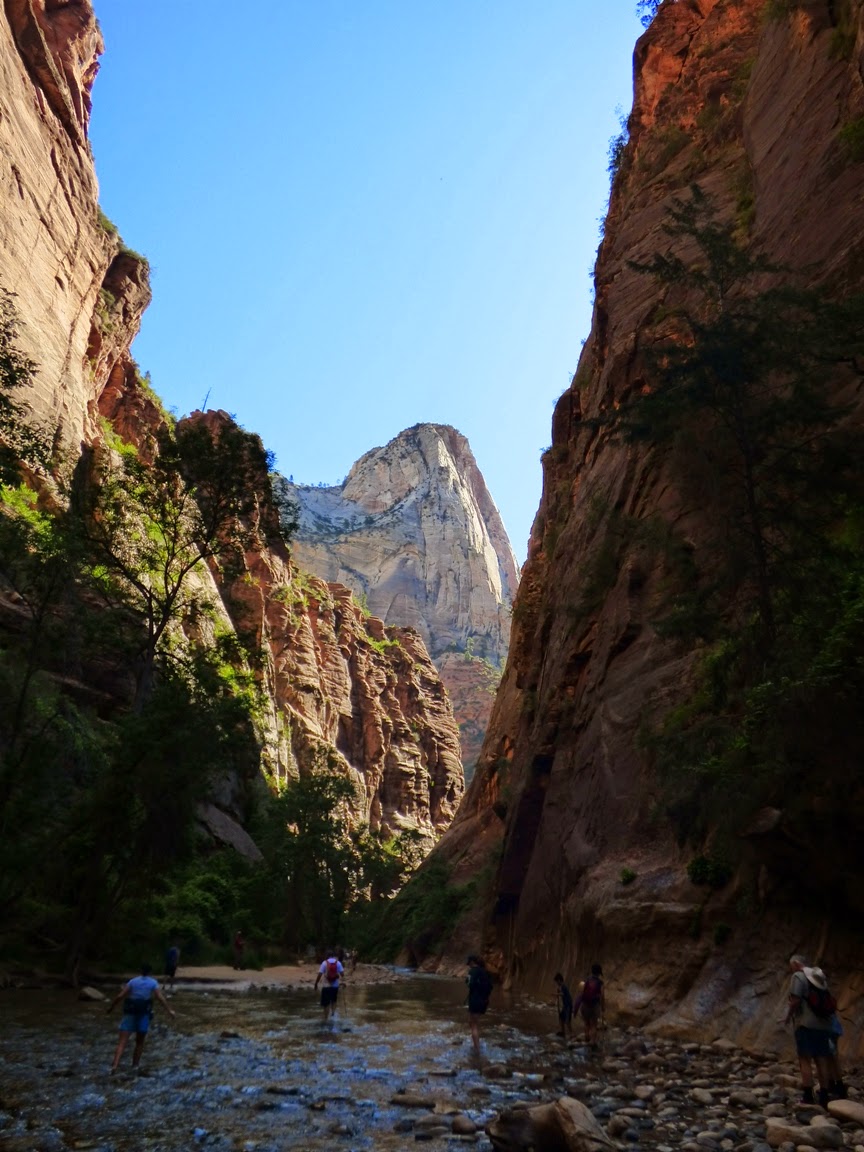 Not where they stop, mind you, but where the trams go. Zion National Park underwent a huge change in 1997 when the park service closed the upper canyon of Zion to private vehicles and instituted a system of free tramways. The change brought an end to my favorite activity of night hiking in the upper canyon, and it at first seemed inconvenient when dealing with large student groups. But it didn't take me long to deeply appreciate the changes that came about in the upper canyon as a result. 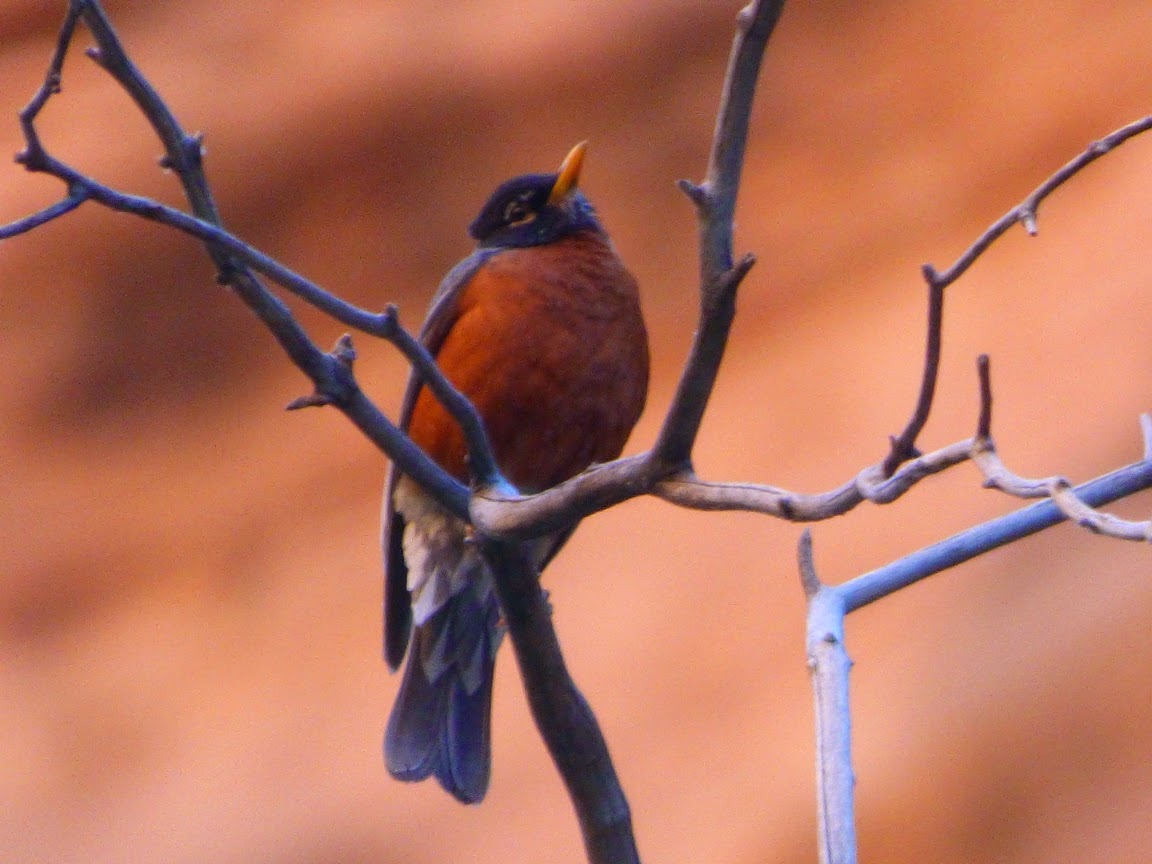 For one, the animals became far more easy to see. On summer days, every available parking spot and pullout along the road would be filled with people, and the animal life would simply hide out. Without the constant commotion, animals felt more comfortable being out, and the tram rides now offer chances to see rabbits, deer, coyotes, foxes, and turkeys, while the tram drivers report seeing other more rare animals like mountain lions and badgers. 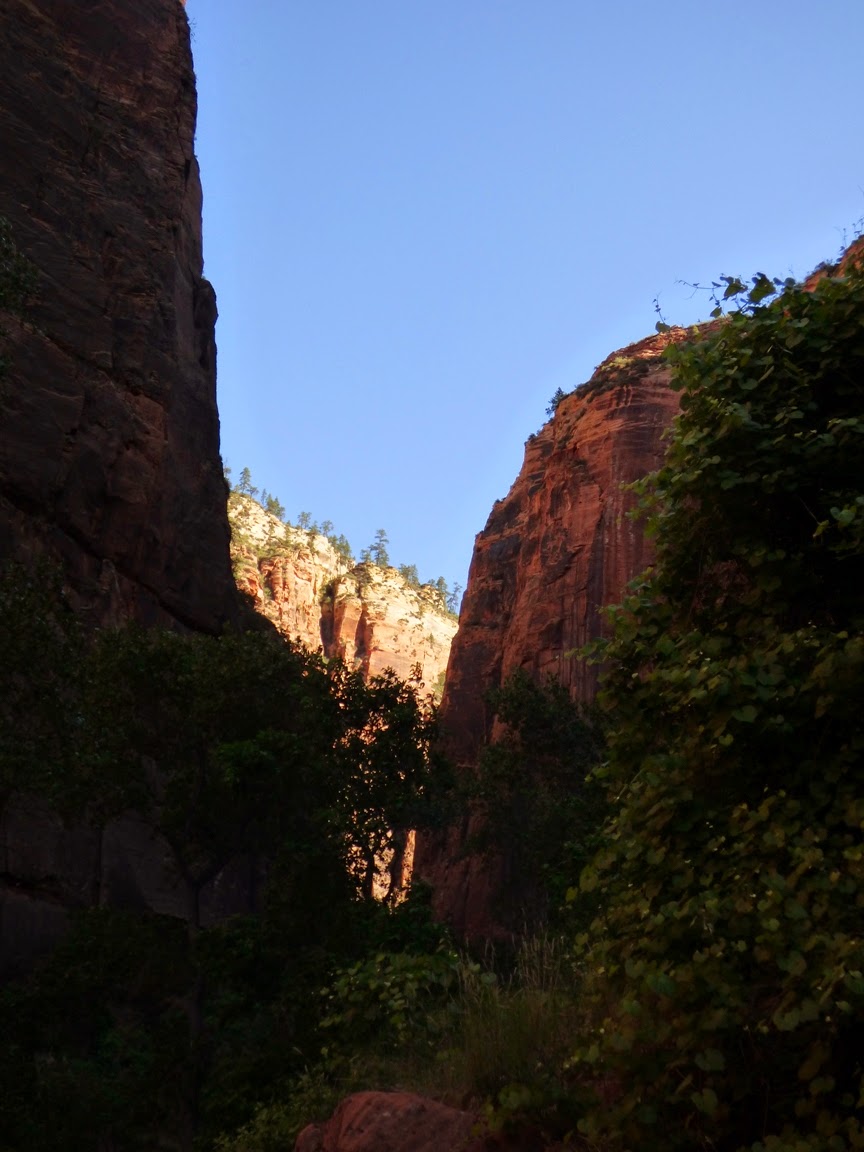 My recent trip to Zion afforded me some extra time to explore some new places, and I took the opportunity. The day started with a normal tourist target, the Gateway to the Narrows and the Riverside Walk. It is pretty much the most popular walk in the park, and is well worth seeing, even if it is crowded.

Zion Canyon is relatively wide in the lower reaches because the layers beneath the Navajo Sandstone are easily eroded, undercutting the high cliffs and causing rockfalls. It's where the Virgin River flows entirely in Navajo that the canyon gets incredibly narrow and very deep, with vertical walls reaching 2,000 feet above the river. The Riverside Trail is a paved ADA accessible trail that follows the narrowing canyon, ending after a mile at the entrance to the Narrows, where no trails are possible, but people can explore miles upstream as long as they don't mind getting wet numerous times. 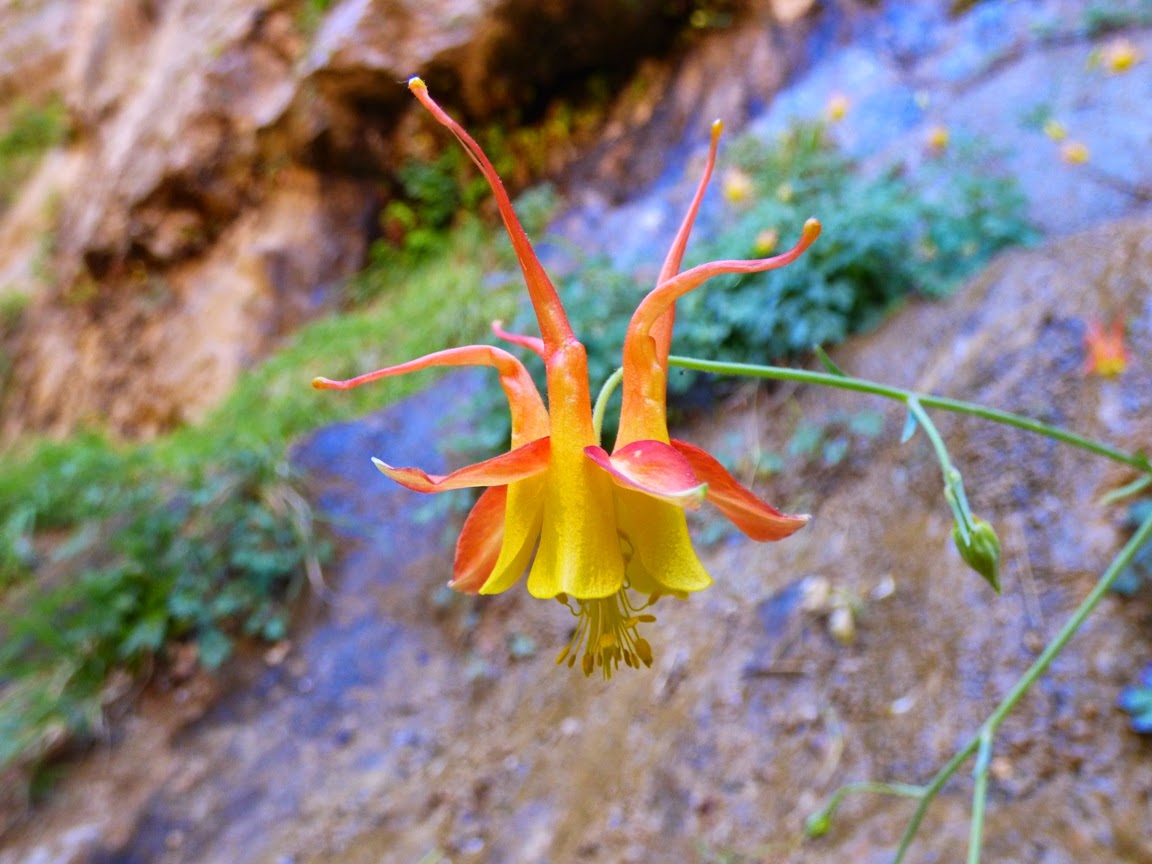 Lots of water enters Zion Canyon from cliffside springs, and the hanging gardens can be very colorful. The Columbines are some of my favorite flowers. Don't worry about the feeling that you are being watched. It's either a Mountain Lion, or one of the Rock Squirrels. I don't which one is more menacing... 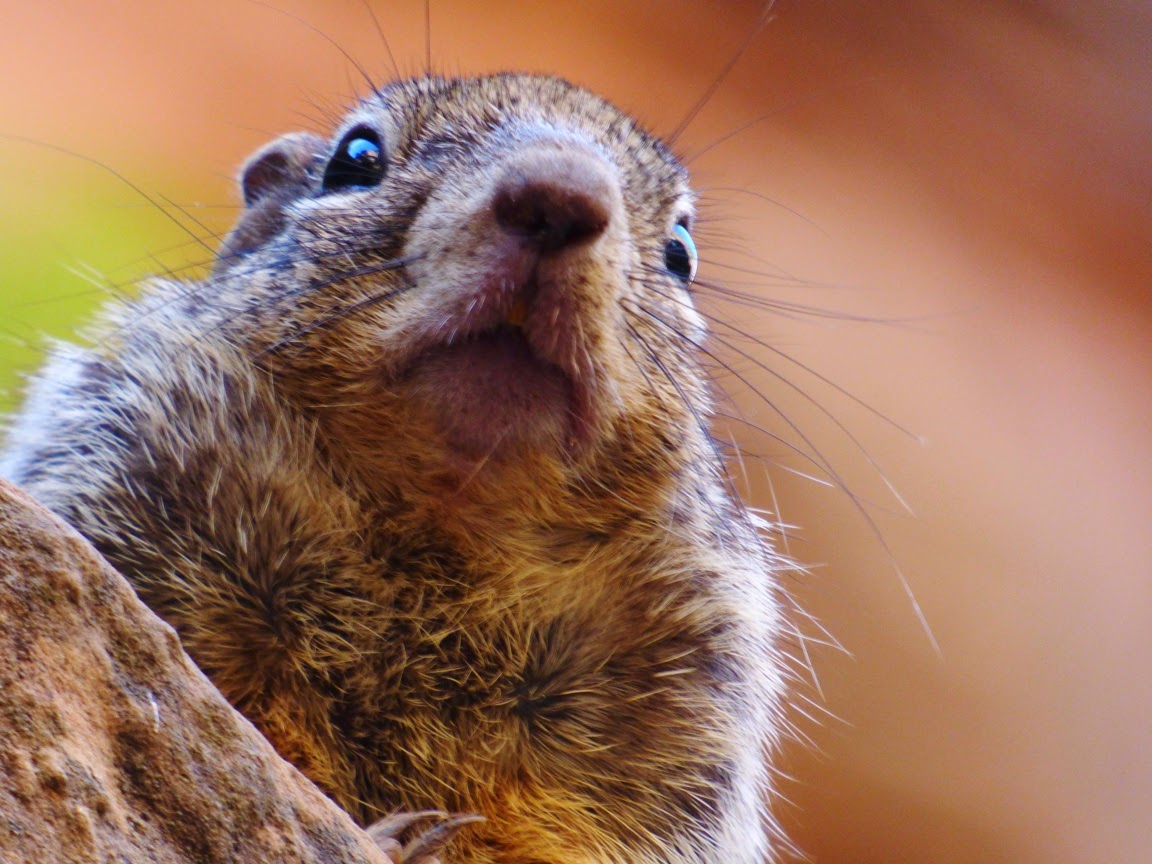 The trail is just gorgeous. But if the crowds bother you, there is a neat little secret for finding seclusion in the midst of the very busy national park. Like I said, walk where the trams go. Not where they stop, but where they travel between stops. You can walk along the road, or in many places a foot path follows close to the river. A tram will pass every 10 or 15 minutes, but that will be it for the motorized noise. I had two more hours to play with so I decided to walk as far down the canyon as I could. 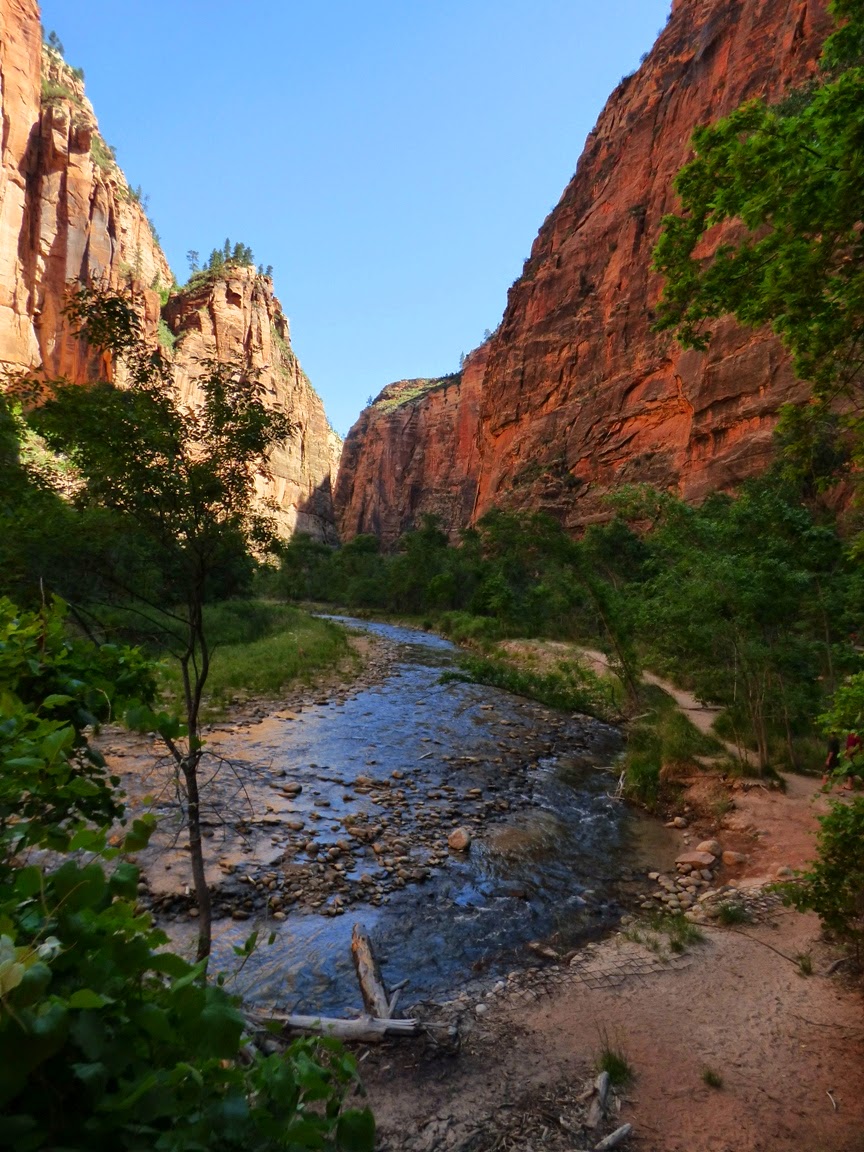 I first passed the empty parking lot at the Temple of Sinawava, the end of the paved highway. I remember so many harried efforts to find parking for four vans on trips in years past, with hundreds of people hanging about, unwilling to give up their precious parking spots. Today it was quiet, because the moment the tram pulls up, people get out and immediately disappear up the trail. 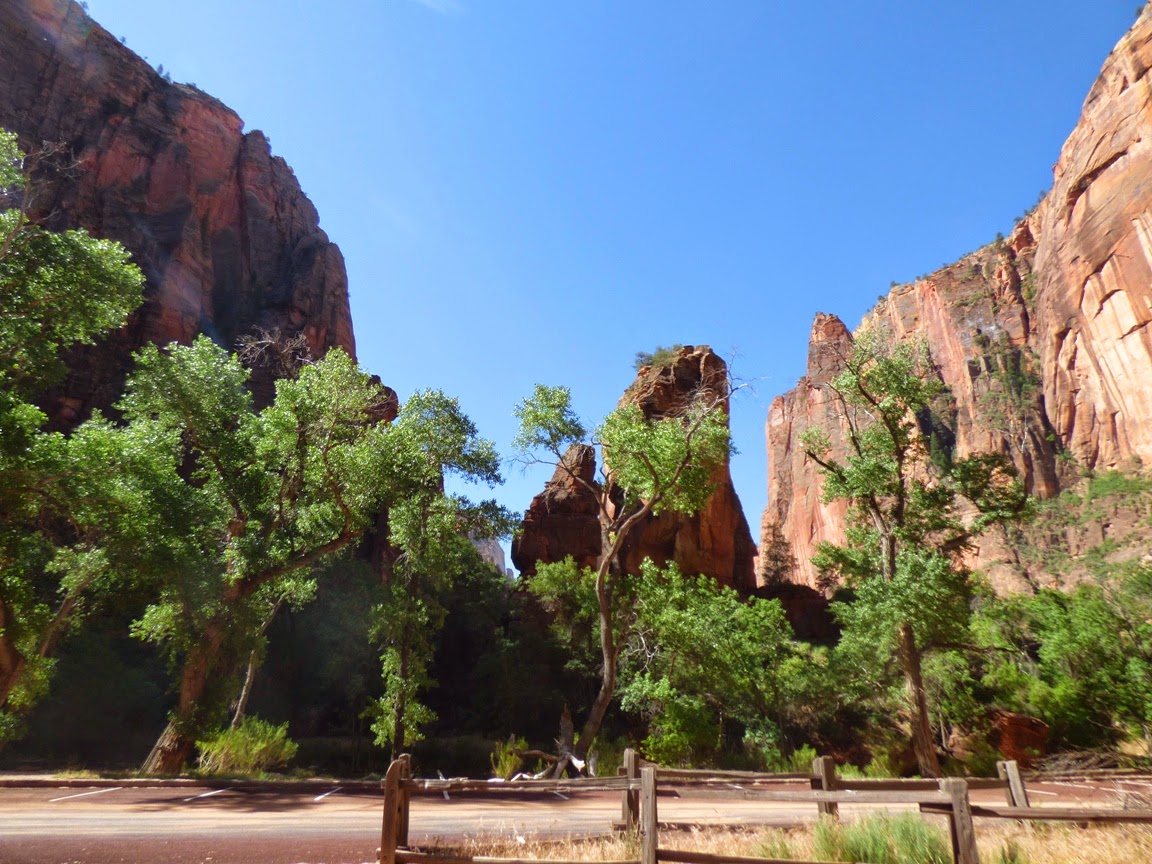 Walking down the road, I was immediately struck by how unfamiliar the canyon looked. Walking is slow, giving one a chance to look at cliffs from new angles and new perspectives. I never saw this sort of thing from a car window. 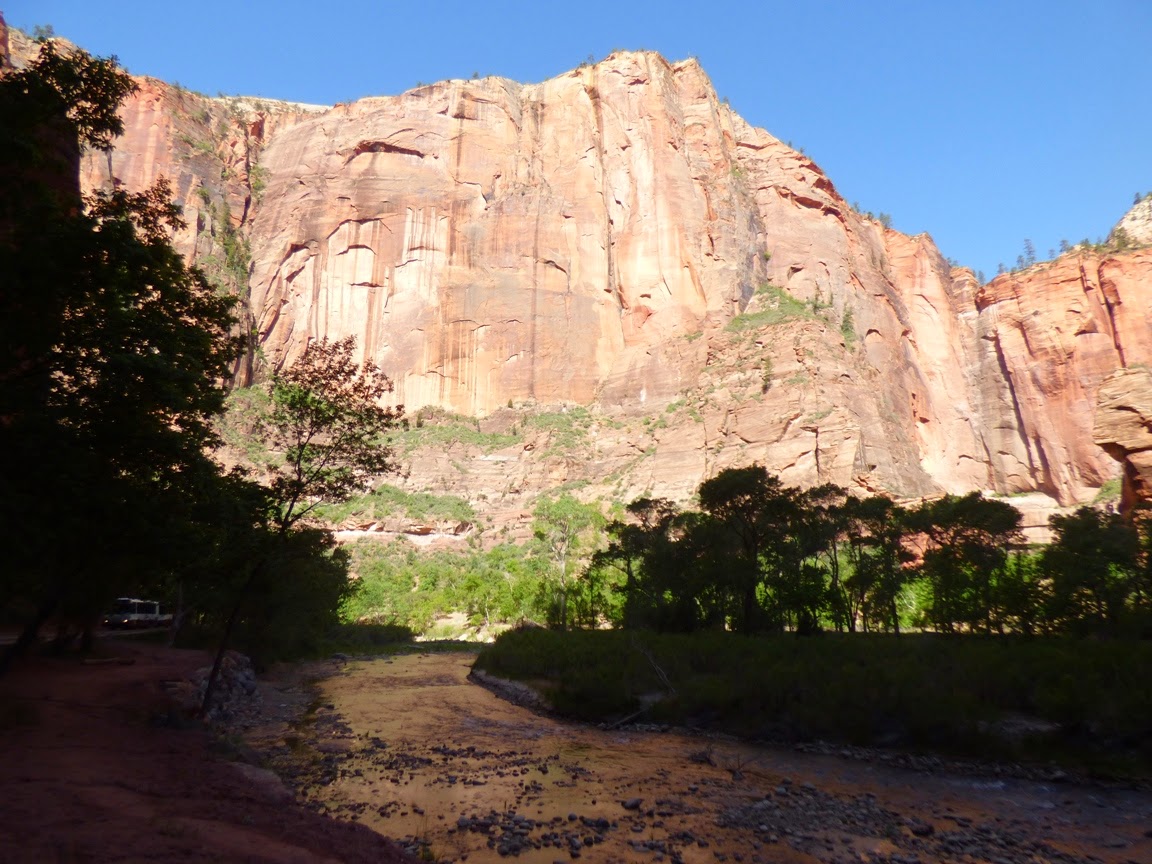 The cliffs seem to change character every few hundred yards, with some cliffs sheer and unbroken, and others broken up by jointing. The air was fresh and the canyon bottom was still cool as the morning sun had not yet reached the floor of the gorge. 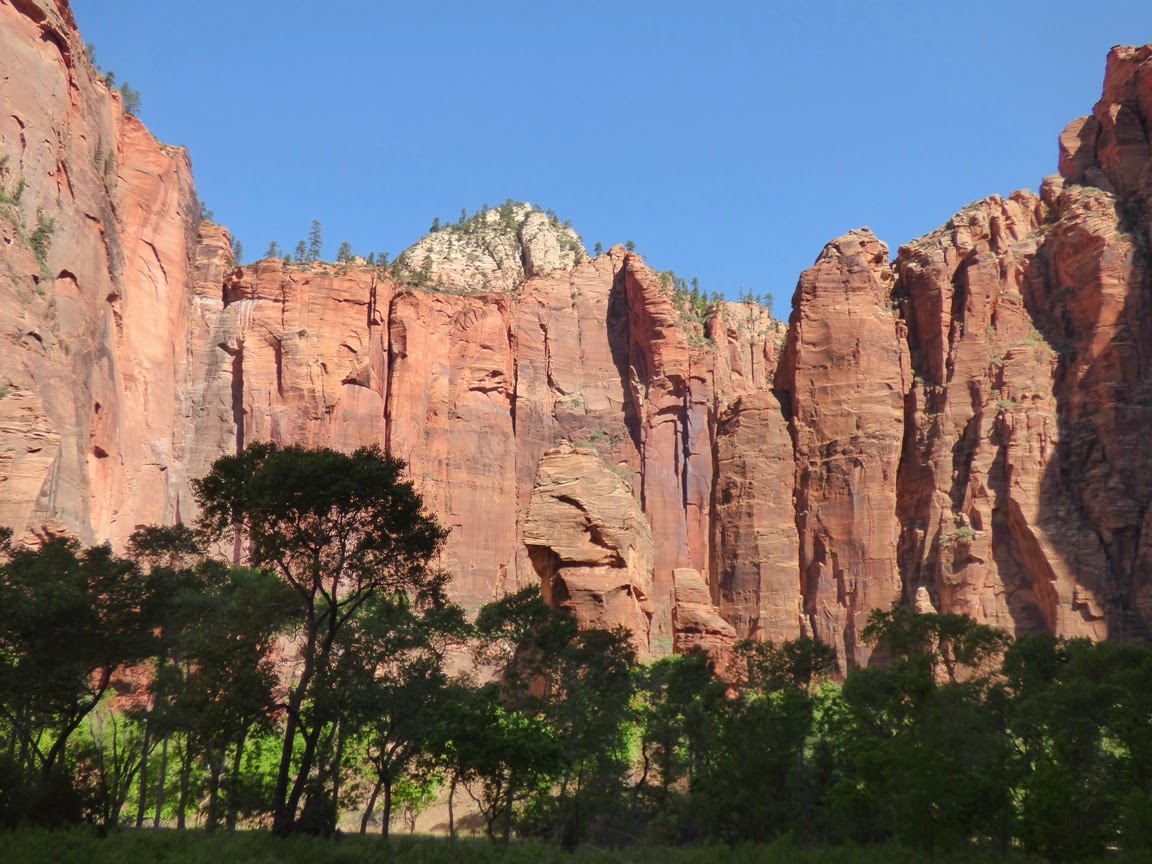 The emerald green cottonwood trees provided a strong contrast to the reds and browns of the canyon walls, and all of it was reflected on the waters of the Virgin River. Even the sound of flowing cascades felt unfamiliar and strange, but it was delightful as well. Zion has been compared to Yosemite, only it's red and without the glacial origin. Maybe. I like to see each park on its own terms. Zion is a beautiful and stunning canyon. 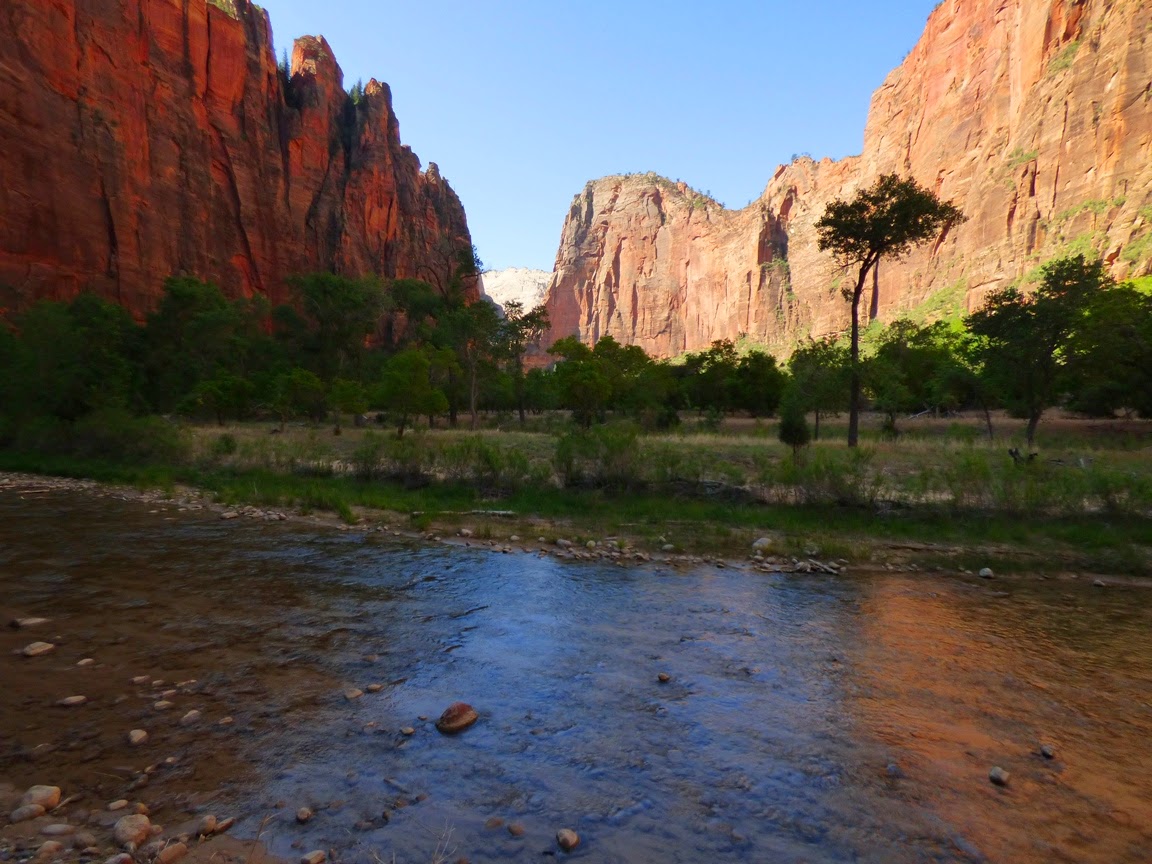 I noticed a park tram stopped in an unlabeled pullout. It turned out to be a ranger tour, and I found out about an attraction in the canyon that is not on any of the park maps. It's called Menu Falls, and it is a delightful small waterfall just a few yards from the road. There is even a trail and platform for viewing, but to get there you either have to walk like I did or take the ranger tour. The name derives from the fact that early menus at the park lodge had a picture of the falls on the cover. 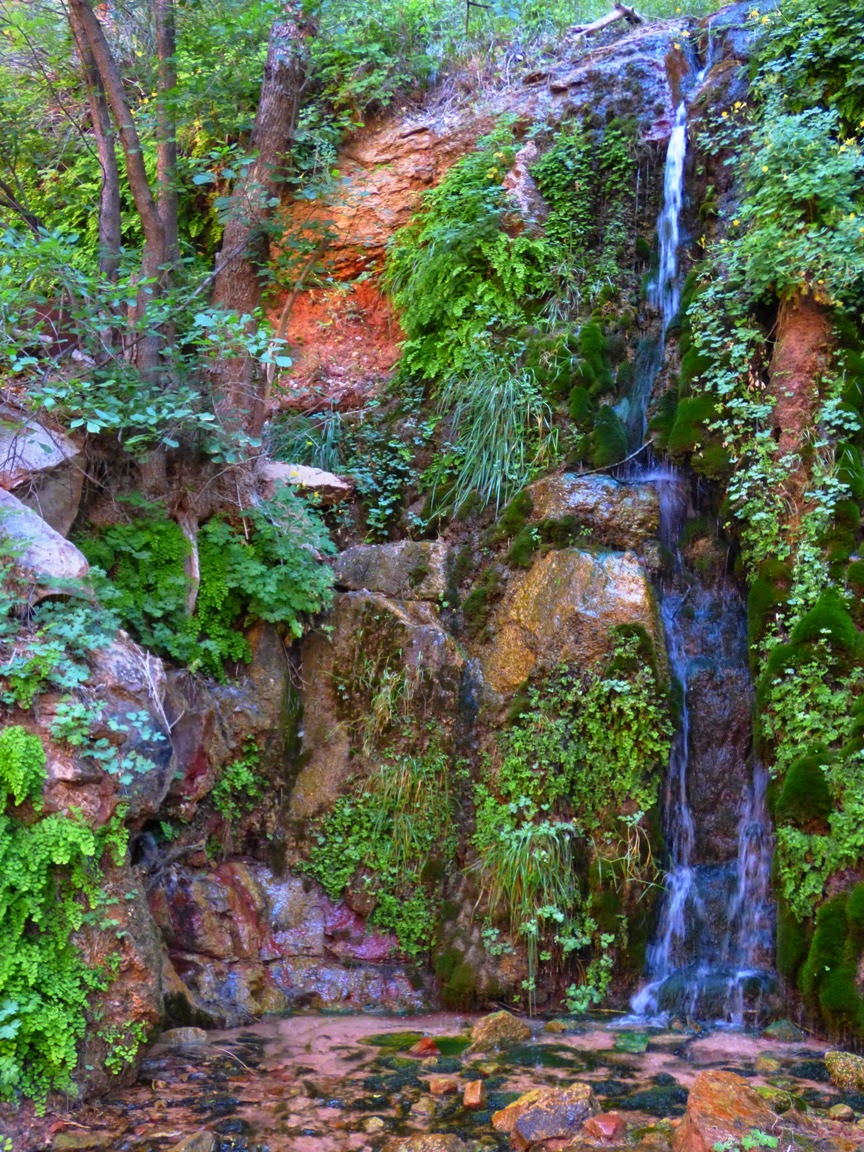 I happened upon a park ranger with a spotting scope looking for California Condors. The birds were once very much on the verge of extinction, down to just 22 individuals in the 1980s, but with a captive breeding program, they are making a comeback. Today there are more than 400, with more than 200 returned to the wild. The numbers may be close to their pre-European contact population. They are truly a relict Pleistocene creature, though, and would have been far more numerous during the Ice Ages, when the larger megafauna like giant bison and wooly mammoths would have provided much more food.

I'm sorry to tease you with the picture though. It's actually a Turkey Vulture. The ranger hadn't seen any this season yet. The upper canyon is also a good place to watch for Peregrine Falcons. 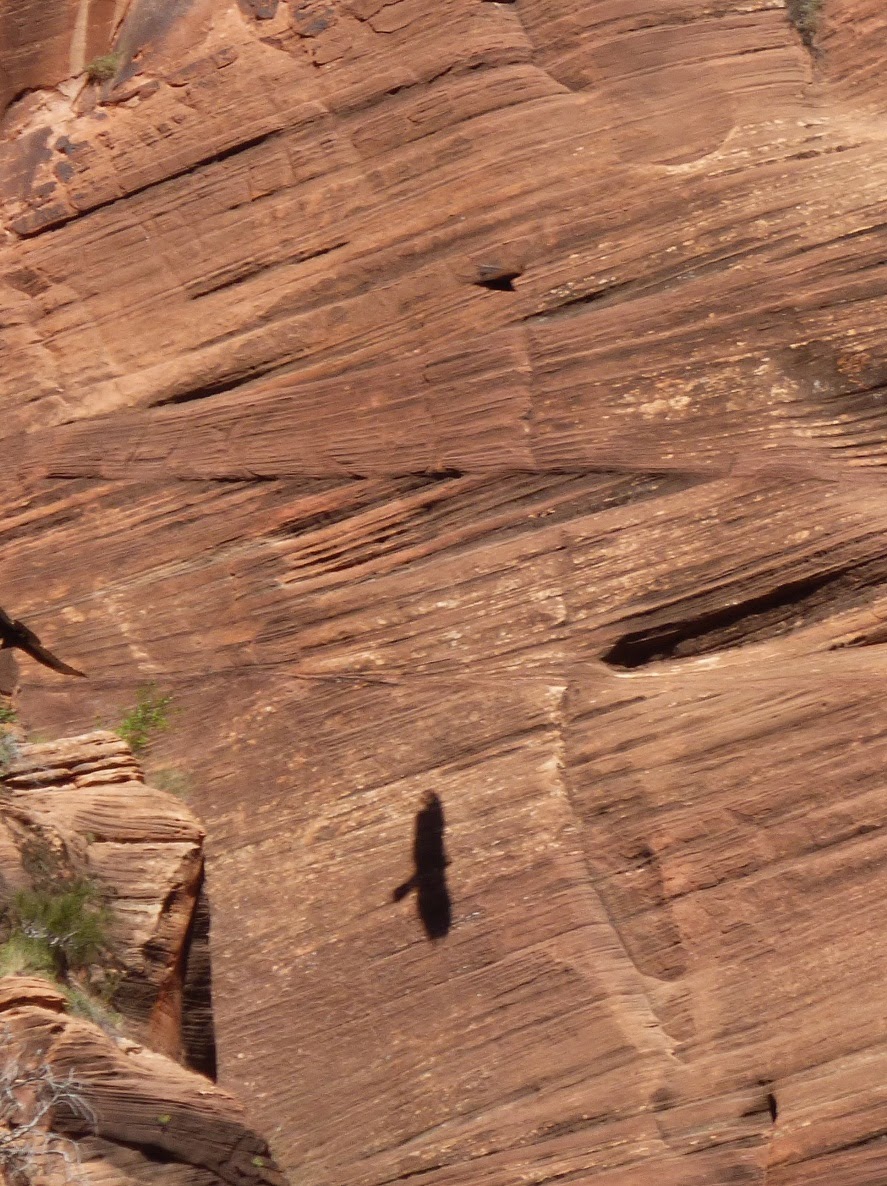 Around the next bend, the Great White Throne came into view. One of the tallest cliffs in Zion, it rises 2,300 feet above the valley floor. No trails reach the summit. 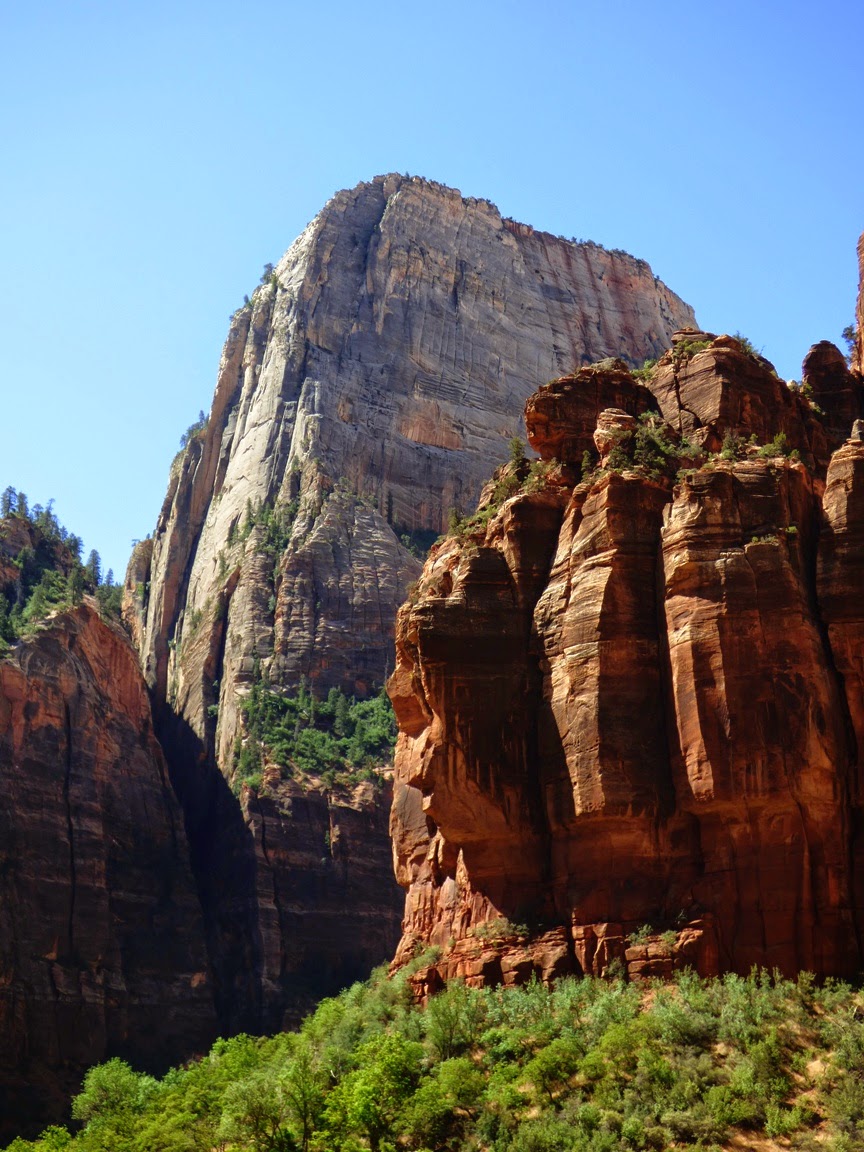 Zion is not known for Ancestral Pueblan ruins, but they are there, in a few spots. I had always seen one briefly through the car and tram windows over the years, but this walk was the first chance I ever had to photograph it. It appears to be a single granary, but was on a pretty steep cliff, so I didn't investigate further. 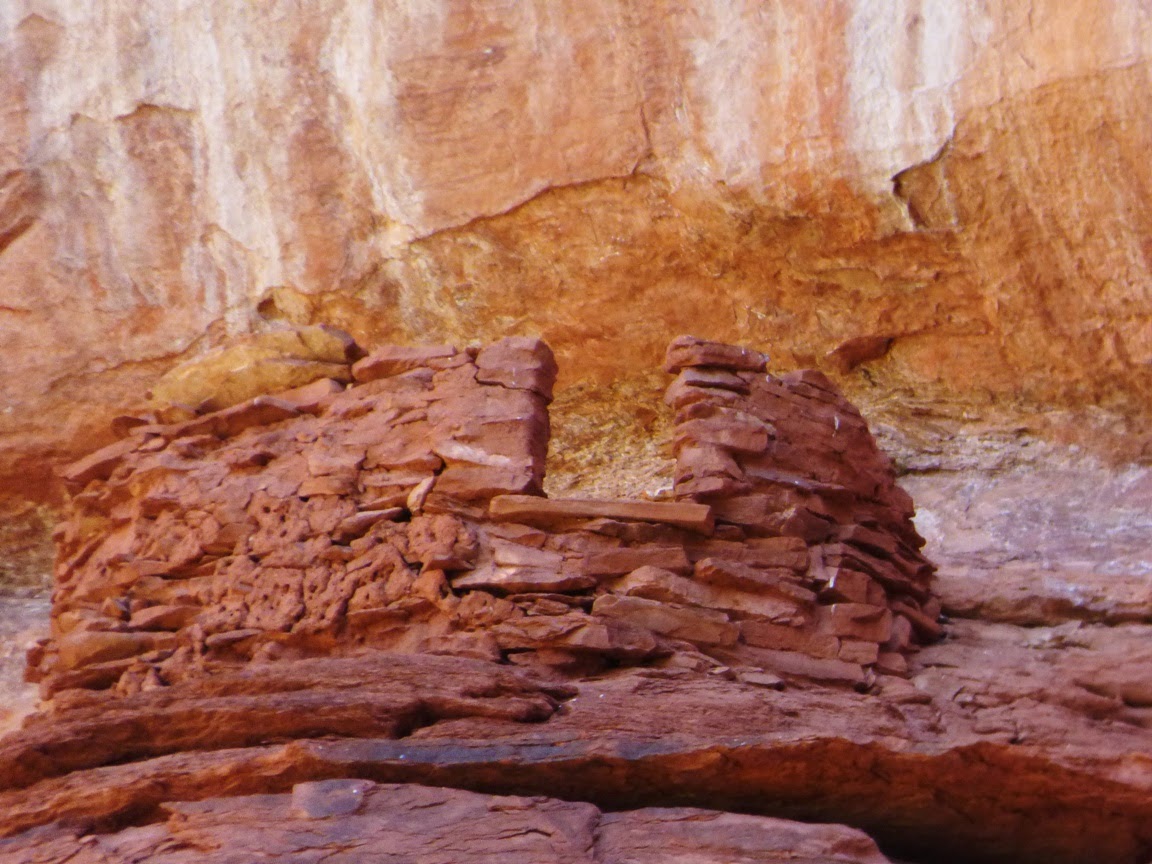 I reached the Weeping Rock tram stop, and time had run out. I'm pretty sure that next time I get the chance, I'll be walking down canyon from there. Who knows what else there is to discover?
Posted by Garry Hayes at 1:21 AM

What a wonderful walk. I'll know exactly what to do if/when I get there. I never got past Bryce Canyon when I camped for 3 weeks in a big circle from Vancouver BC to Bryce, through Idaho to Mount St.Helens, and back home again. A gorgeous trip - now of course, I wish I'd stayed longer and hit Zion as well.

Visited Zion early last month on quick tour but will remember to look for Menu falls on the next visit.
Never have made it to the upper Emerald pool either.