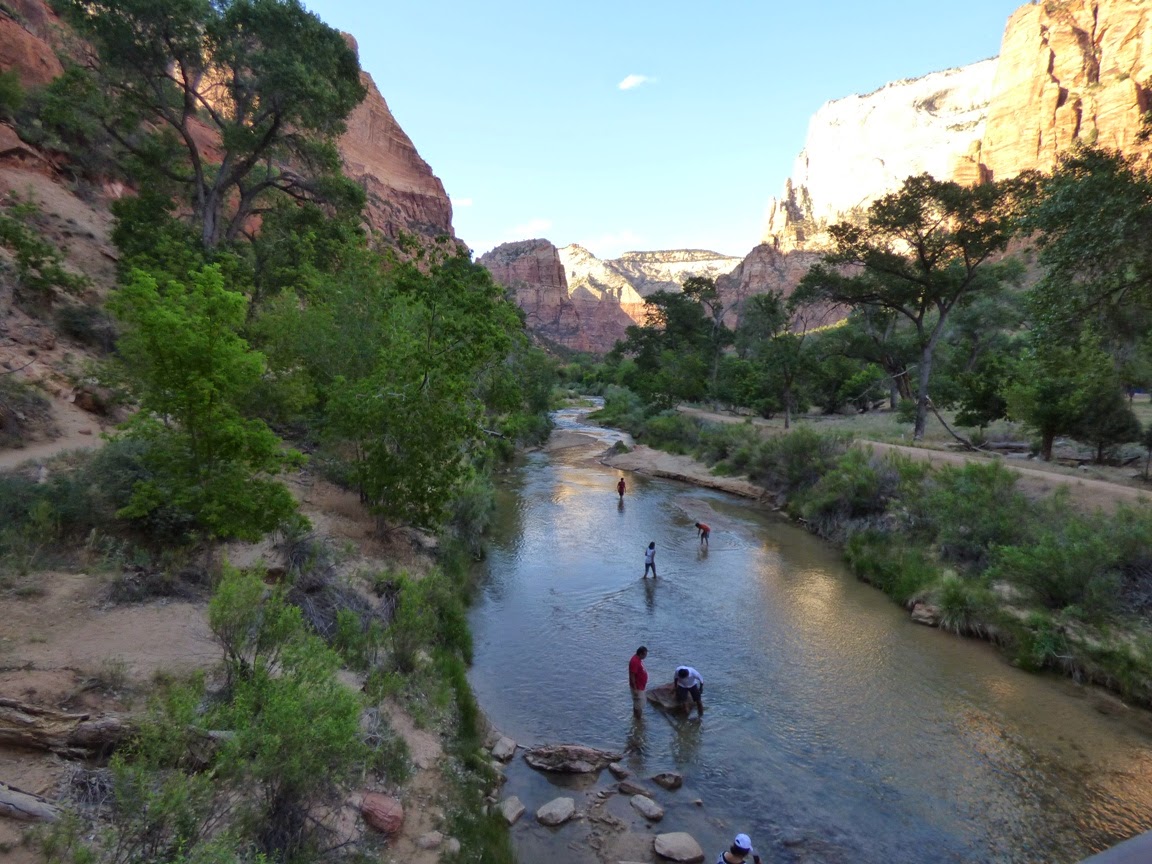 There is a somewhat odd relationship between me and Zion National Park. I love the place, I've been there probably 20 times in the last two decades, but I haven't seen a whole lot of the park. The problem is that I'm usually there with a large group of students, and our possibilities for exploration are therefore somewhat limited. Our visits tend to include a stop at Checkerboard Mesa on the east side of the park, a possible hike to the Zion Arch Overlook, camp, a look at the visitor center first thing in the morning followed by 4-5 hours of free time where students ride the trams to the upper canyon and hike either to the Gateway to the Virgin Narrows, or the much tougher hike to the top of Angels Landing. I opted for Observation Point one year (and was that a tough hike). But then we are on the road to Grand Canyon, and that's it. 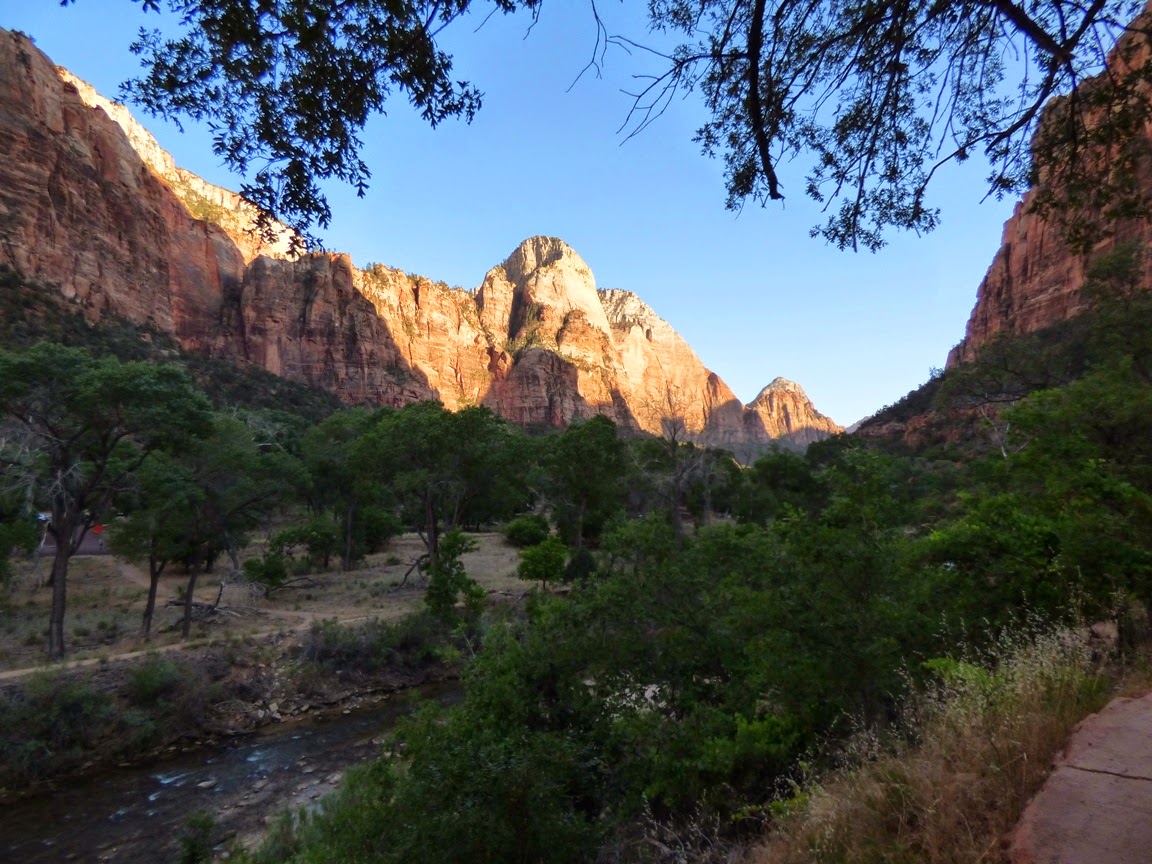 I've seen more of the park in the last two years, as I've led a different group with a slightly more relaxed schedule, which has allowed us to explore different parts of the park. We've seen Lava Point Road, and the Kolob Canyons, for instance. But one place I haven't seen in a quarter century is a common tourist destination just a short walk up one of the side canyons: Emerald Pools. The funny thing is, I've been there a couple of times, but I haven't exactly seen it. 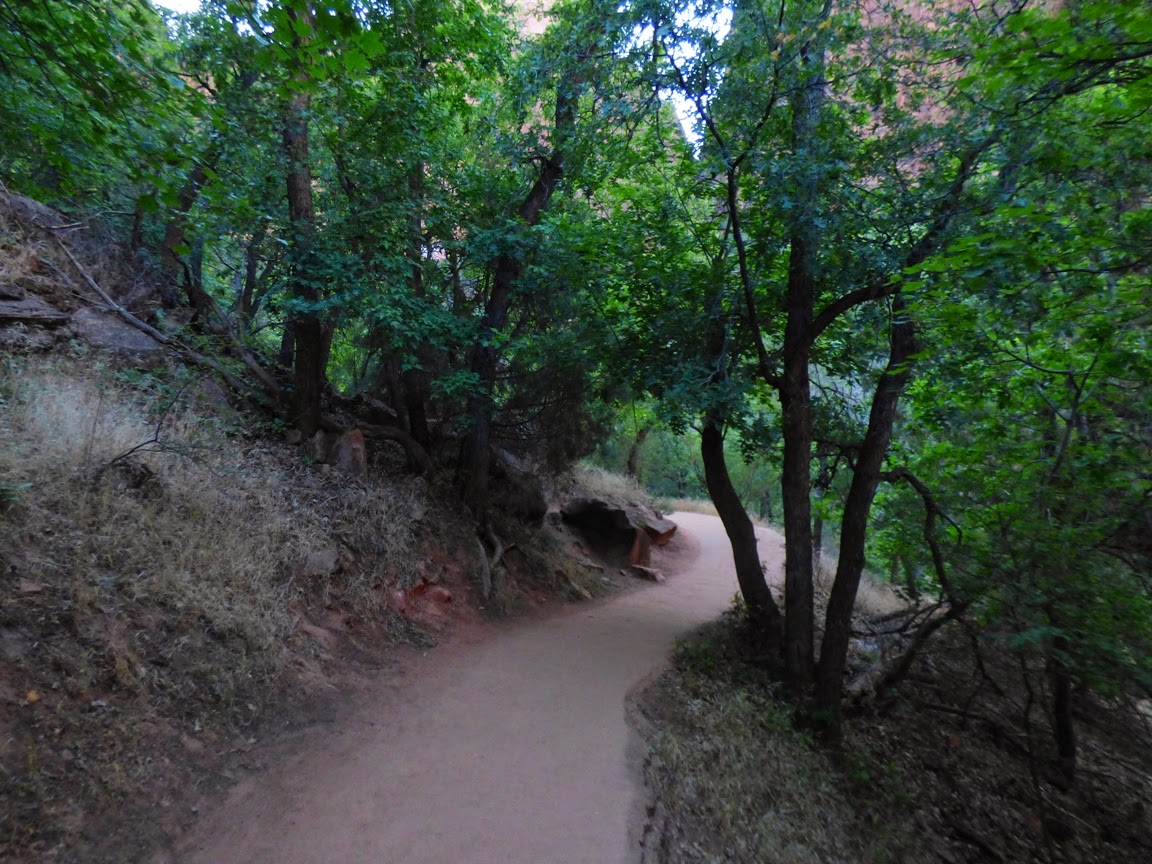 What happened was this. Between my first visits (aside from childhood vacations) in 1984 until 1997, we used to use the evenings after dinner for night-time explorations of the upper canyon. We took night hikes! The trail to Emerald Pools was ideal, because it was paved and could be followed in almost total darkness. A night hike is not really a night hike if you have use flashlights, after all. Mind you, in saying this, I did almost walk face first into a porcupine that was climbing in some shrubs overhanging the trail.

Those night hikes are among my most treasured memories. The stars, framed by the high canyon walls, would sparkle. Some years we watched the full moon rise over the cliffs. During a few memorable years we experienced lightning storms, the booms of thunder reverberating across the canyon walls. At night, the Emerald Pools echoed with the surprisingly loud call of frogs, and in the coolness we could smell the moisture in the air, a treat in the desert environment. And one year, a slab of rock three feet across fell from the top of the alcove, landing just a few feet from some of our students. 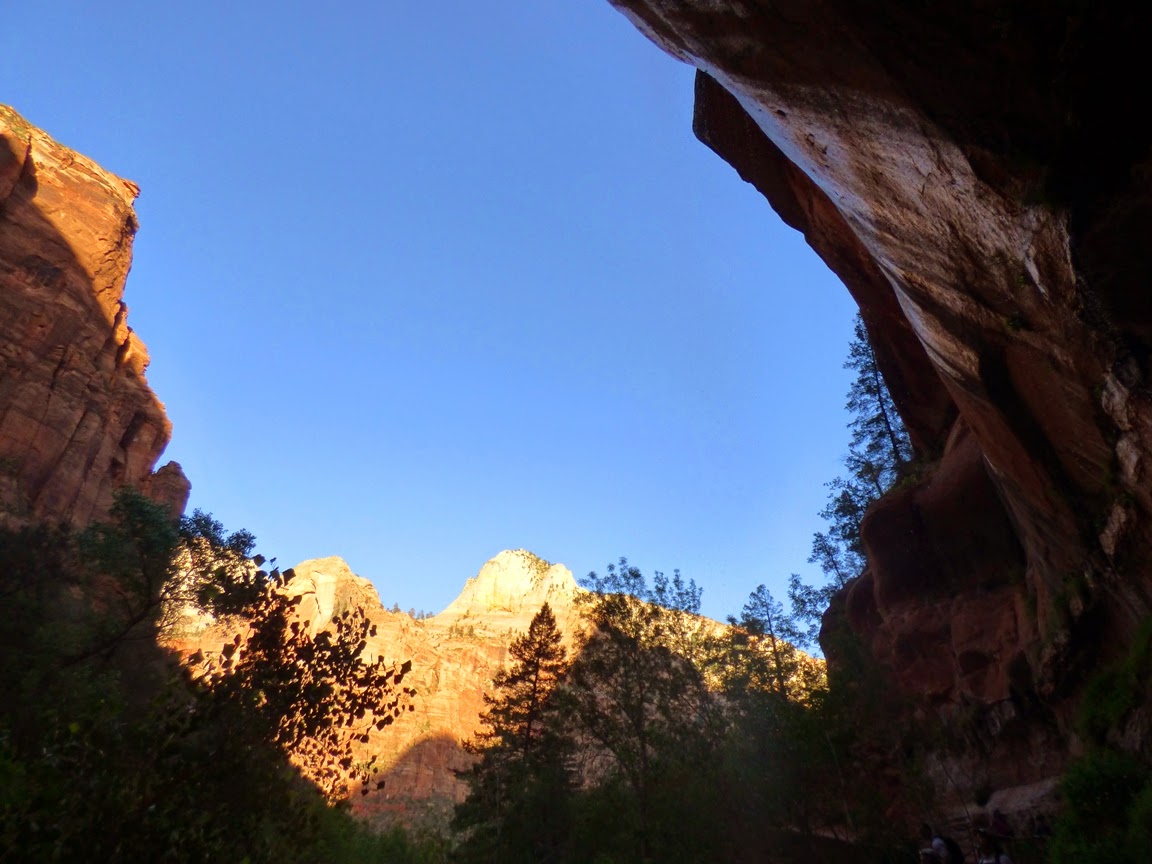 What changed in 1997 was the introduction of the trams in upper Zion Canyon, and the elimination of private cars. For many reasons, this was a great innovation (some reasons to be mentioned in the next post). But from the beginning the trams stopped running at 10 PM, making night hikes impossible without a very long walk down the canyon to the campground. So I haven't been to Emerald Pools since then, and I have never seen them in daylight! I couldn't really tell you what they look like. That changed finally during our trip a few weeks ago. I had a few spare hours in the late evening, so I took the tram to the trailhead and started up towards the pools. 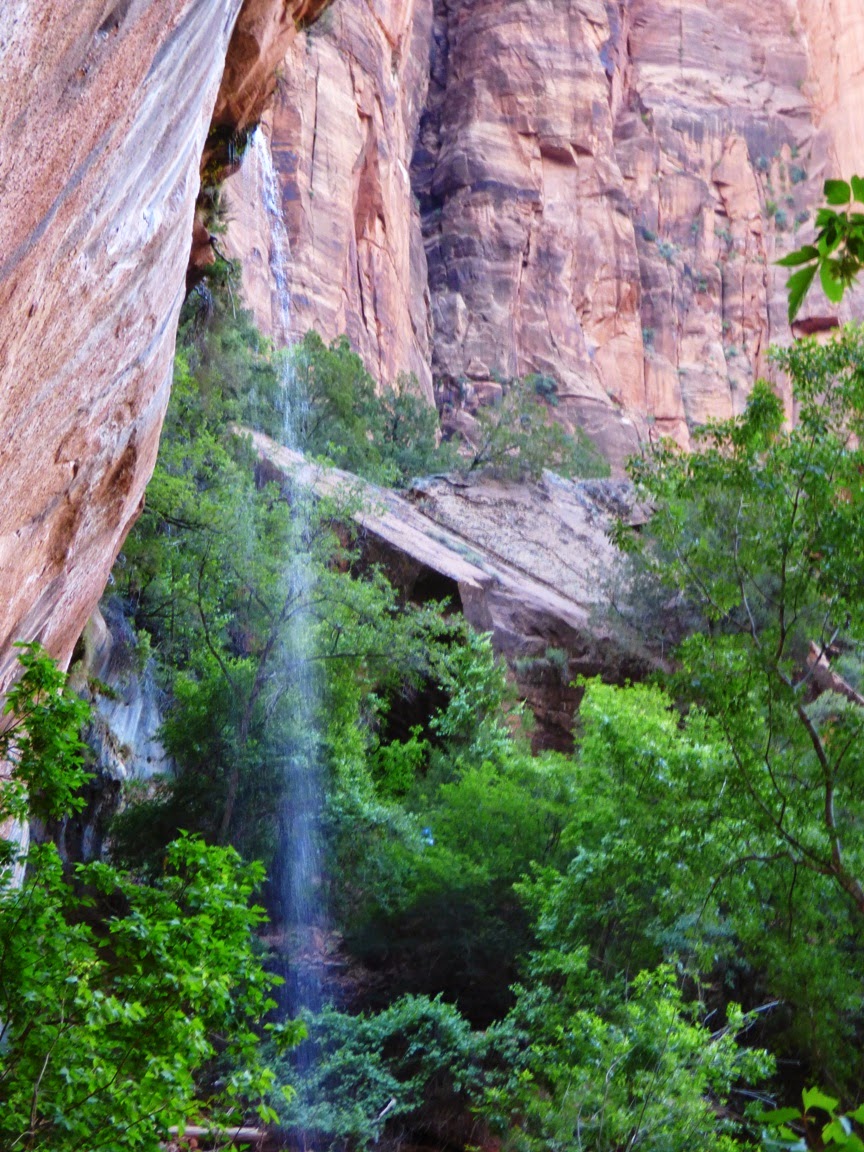 You may notice that the features are called "pools" and not lakes. There are three sets of pools, the Upper, Middle, and Lower. The Lower Pools are reached within an easy half mile stroll, the Middle Pools are maybe a fifth of a mile farther with some climbing and steps, and the Upper Pool is up a tough sandy and rocky trail something like a half mile higher. The lower pools lie at the base of a huge alcove and aren't much to look at, but the small waterfalls coming over the lip of the alcove are a treat. The trail winds around the back of the alcove behind the two trickles of water (a wonderful sight when the full moon shines into the alcove, by the way). 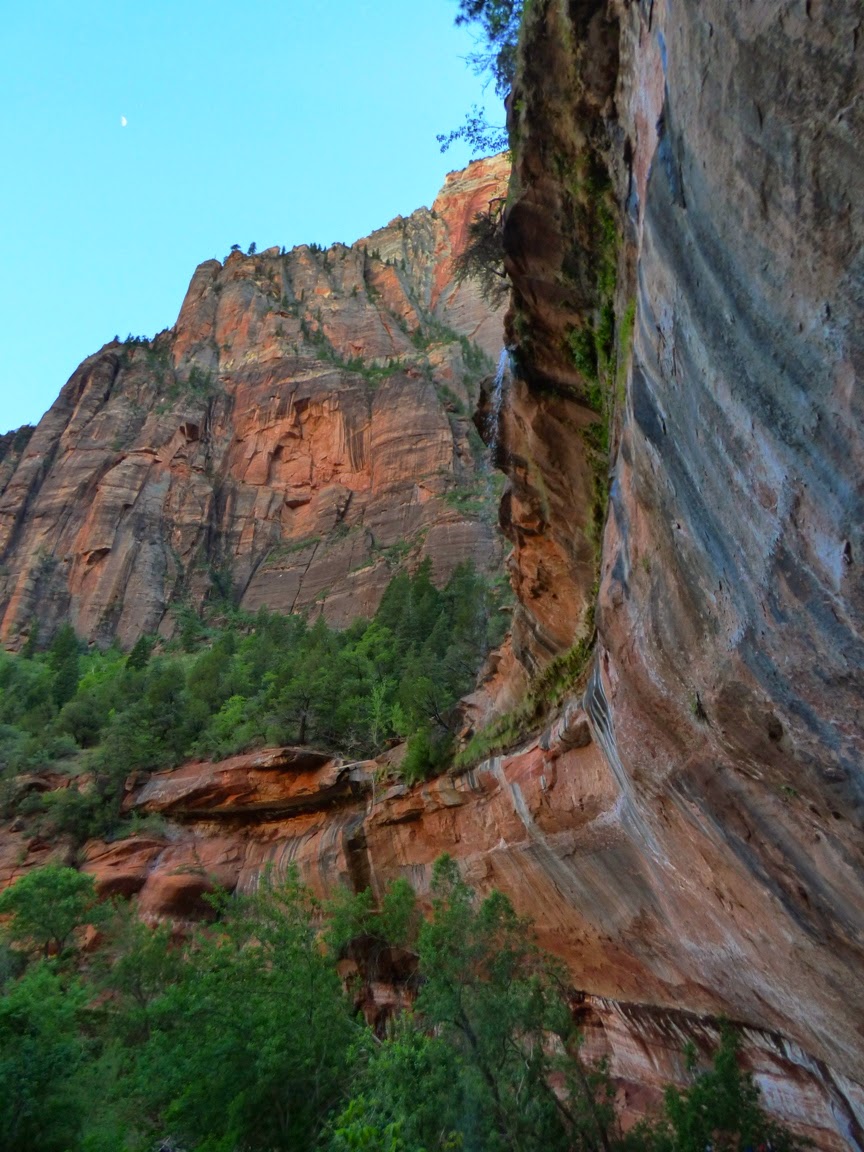 I listened to the frogs for a few moments and headed up to the Middle Pools just behind the edge of the cliff at the top of the alcove (check out the guy in red for scale in the picture below; and yes, he is past the "danger" signs where he is not supposed to be). 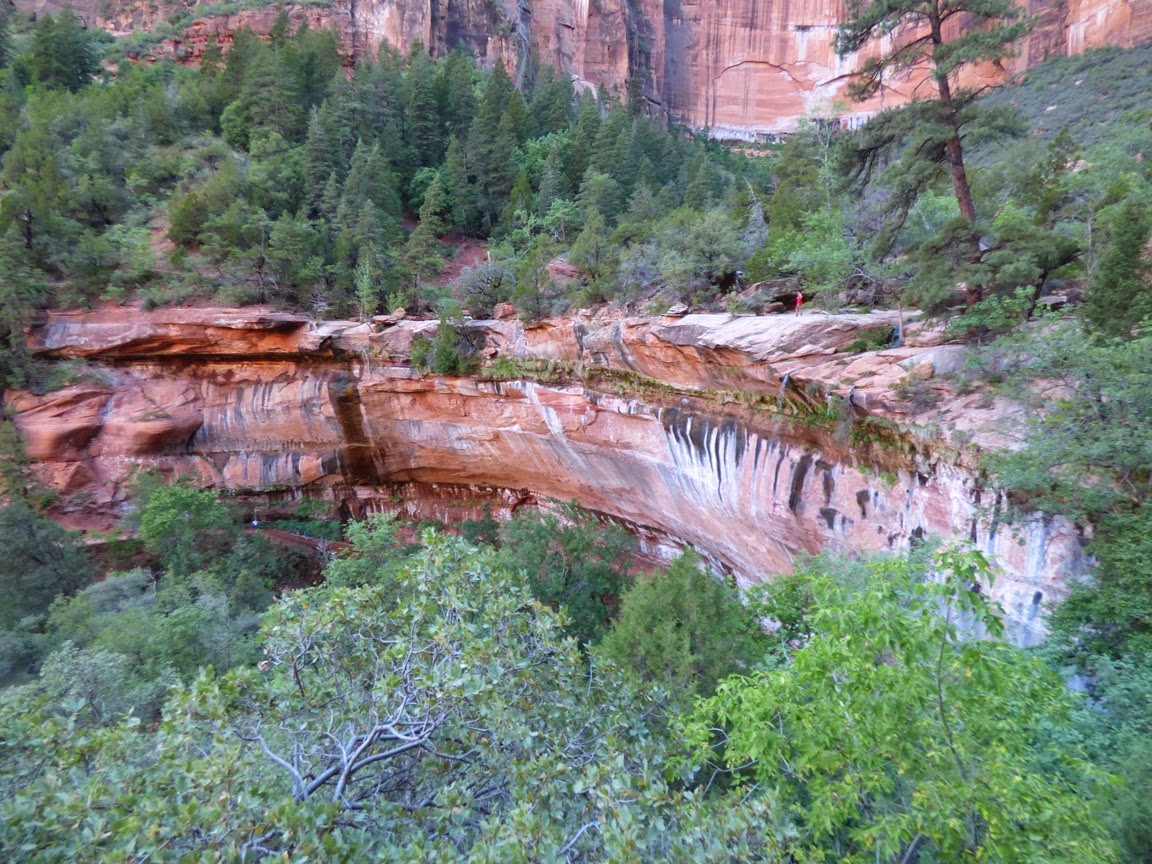 The little pools nicely reflected the sun shining off the cliffs across the canyon. The Emerald Pools lie in a cool "micro-climate" where the sun rarely penetrates. Note the conifer trees in these pictures; they normally grow a thousand feet higher in elevation. 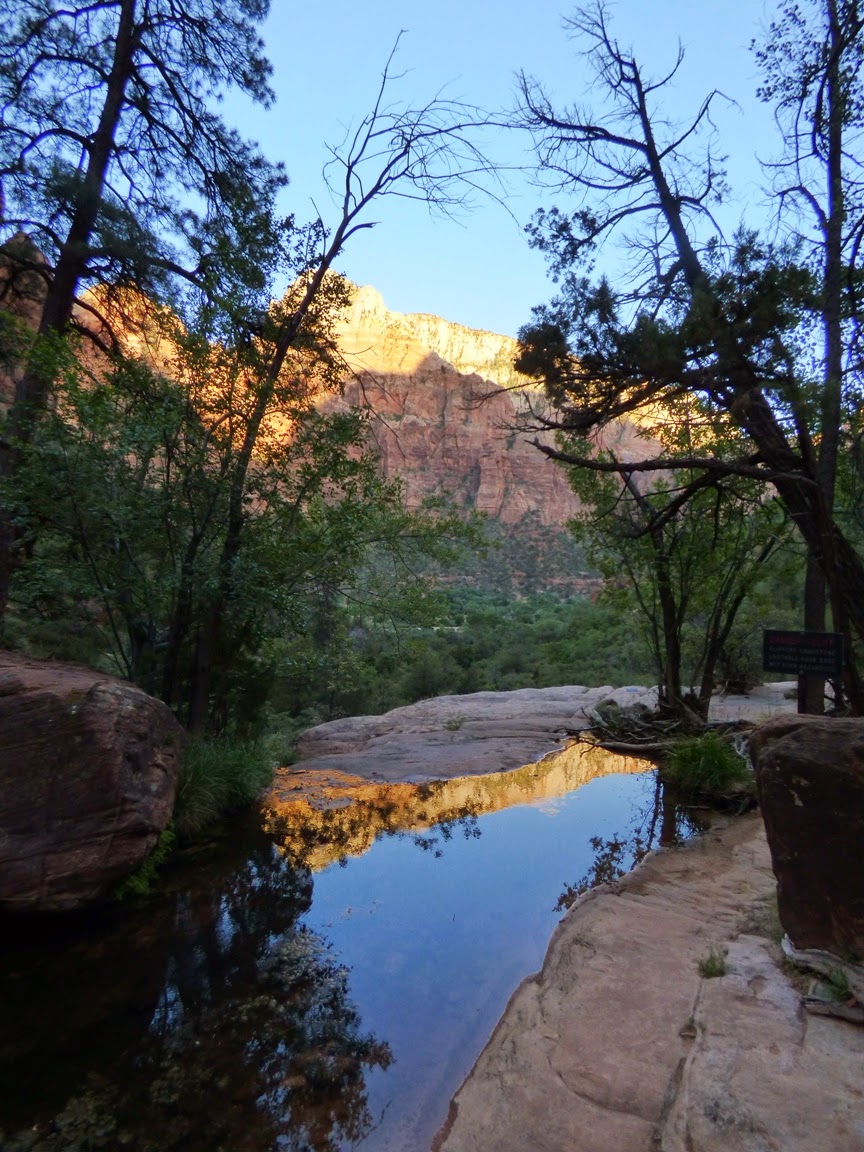 I could see that the sun was getting low on the western horizon (not directly of course, but from the shadows across the canyon). I knew if I wanted to see the Upper Pool I was going to have to hoof it pretty fast. I was only there once before in the dark, and wanted to see it in what passes for daylight. As I climbed higher, the view across the canyon became more and more interesting. 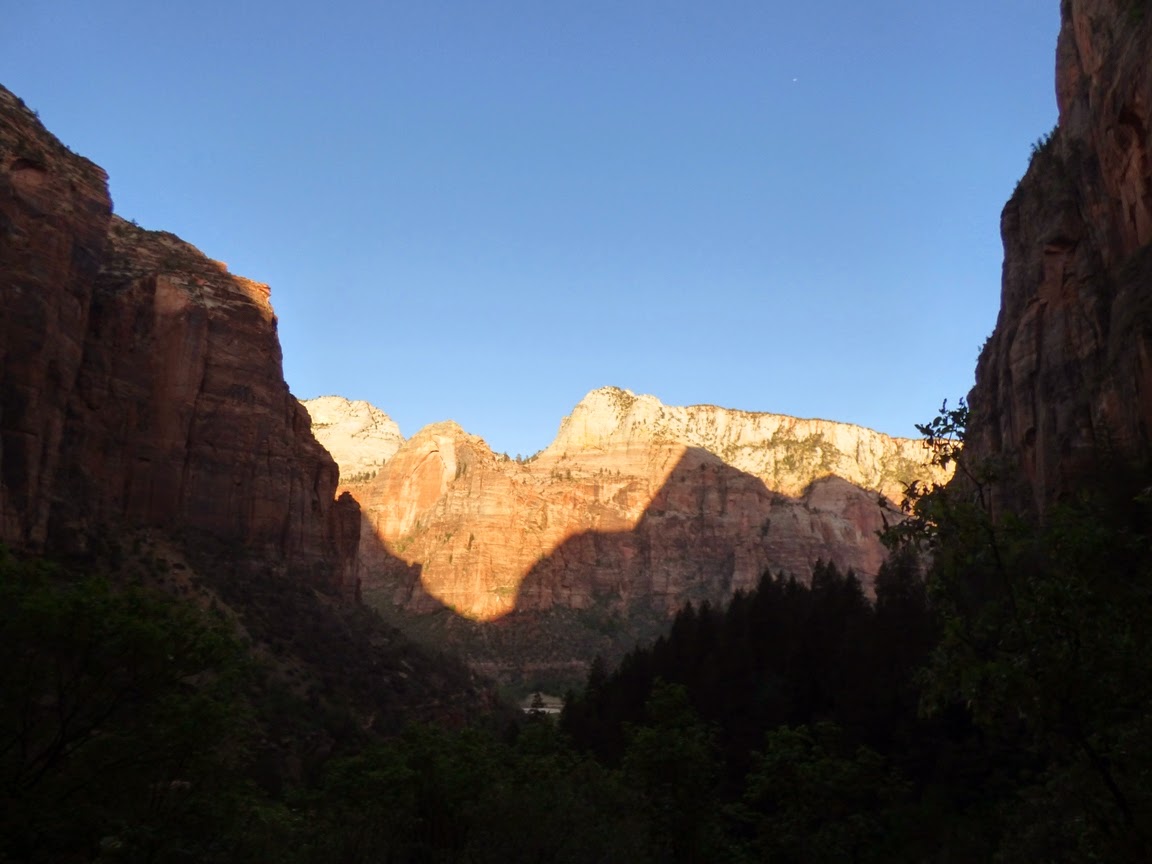 After a few moments I was huffing and puffing (my walking exercises have been mostly on level ground; I can go for miles but those upward steps tested my aerobic capacity). It didn't take too long to reach the Upper Pool, which was the closest thing to a "lake" along the trail. It's actually big enough to swim in, although they ask you not to.

The water is coming from the Navajo Sandstone, one of the most unique and scenic formations on the Colorado Plateau. The sandstone is porous, and groundwater migrates downwards through thousands of feet of rock. When the water encounters an impermeable layer, perhaps a lens of limestone, it moves sideways. If the impermeable rock is exposed in a canyon wall, the water will flow as springs. That's where all the water in this side canyon is coming from. You can see the springs in the cliff above the pool in the picture below. 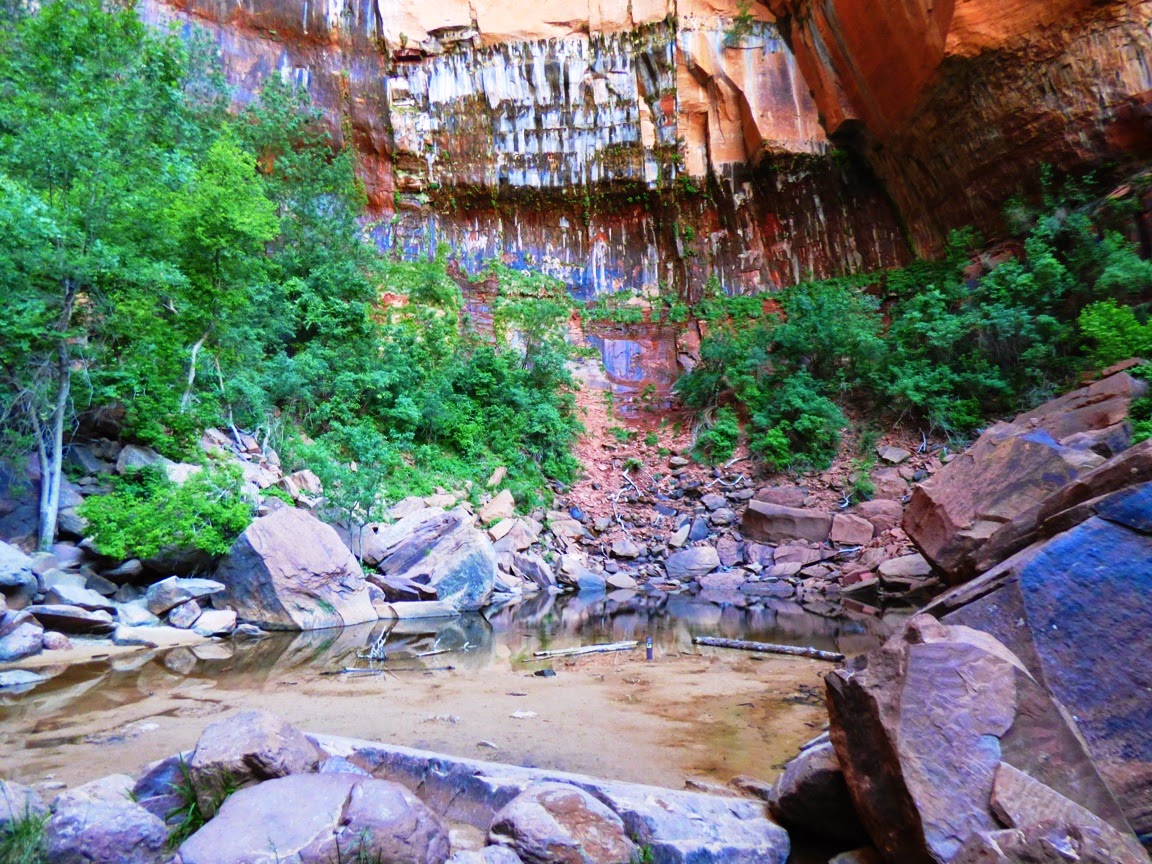 It was getting darker, and the time was edging uncomfortably close to the departure of the last tram down the canyon. I beat a hasty retreat down the trail, stopping a moment to catch another shot of the waterfall and alcove. 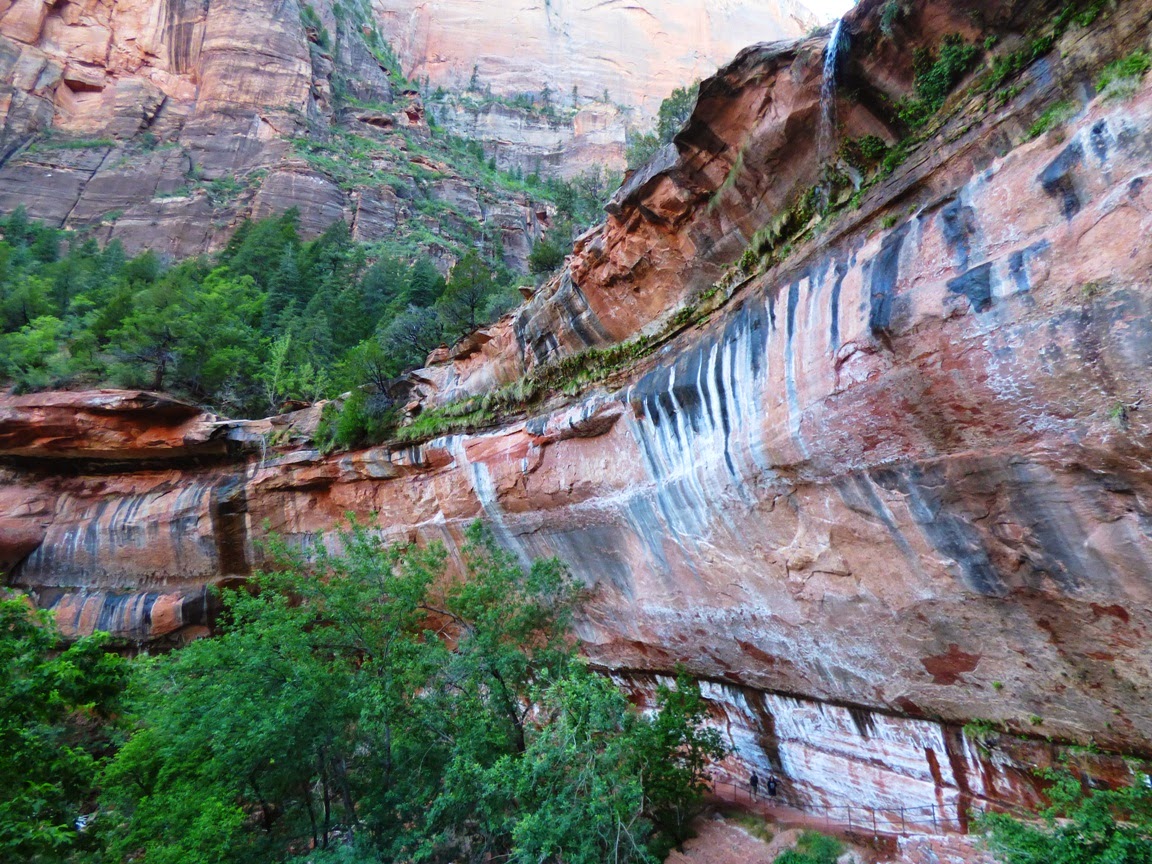 The last rays of the sun were leaving the highest cliffs as I emerged into the main canyon of the Virgin River. Evidence from lava flows downstream suggest that this entire incredible canyon has been carved within the last million years. Such an extraordinary place! 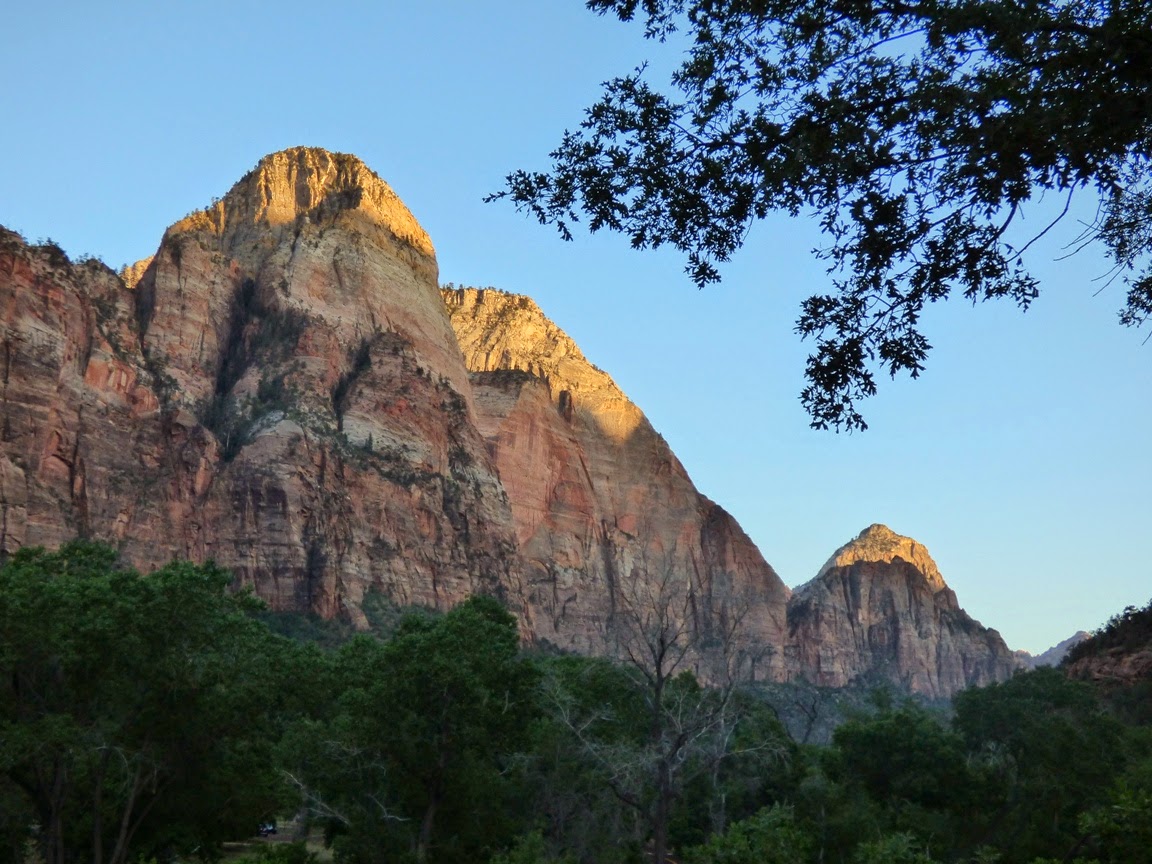 One can look at this relatively small river and wonder how it could have happened so fast, but of course most of the work is done during flash floods, and mass wasting has done much of the work of widening the canyon. I crossed the bridge and headed down the canyon for a late dinner and short swim. 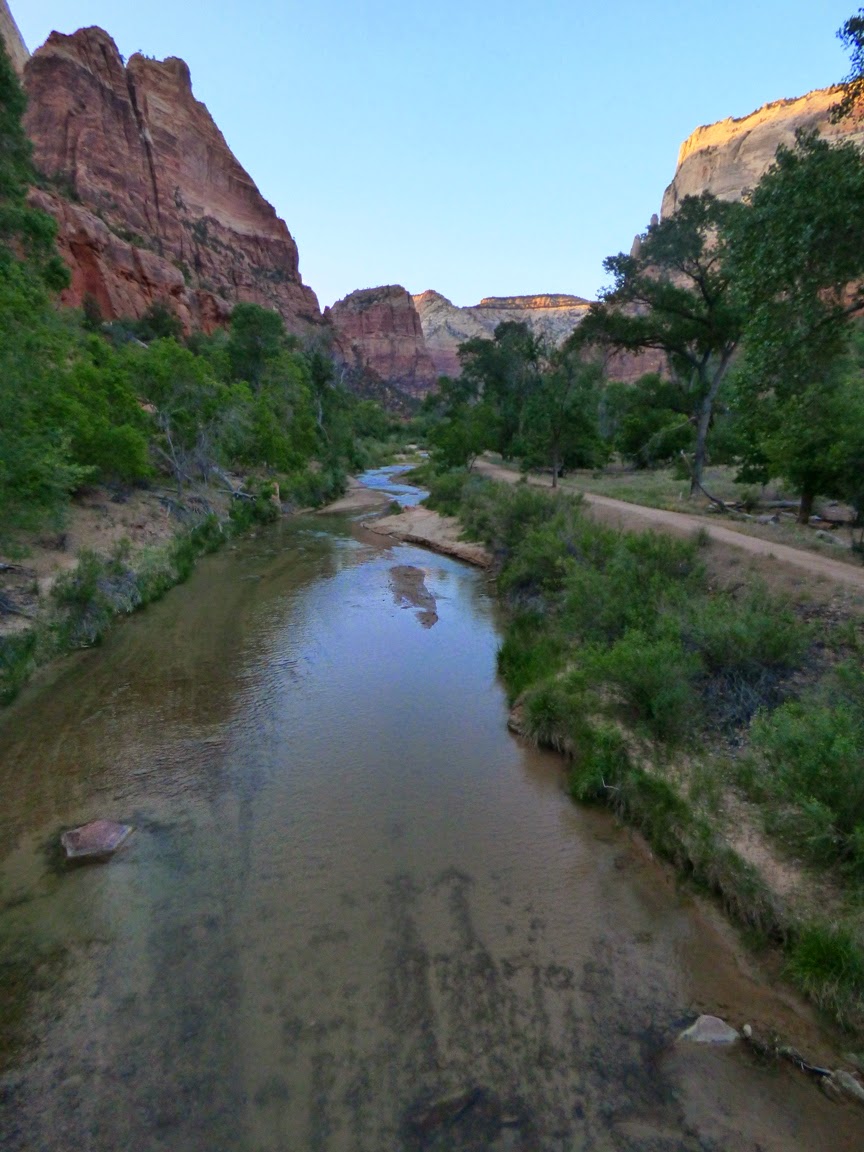 It's been a lot of years, but I finally know how the Emerald Pools of Zion National Park look in daylight. And so do you, but I highly recommend seeing for yourself!
Posted by Garry Hayes at 1:32 AM

What a wonderful journey! Rather a lot of hiking, and I suspect I wouldn't be able to do the same, unfortunately. I love the photos and your explanations, Garry. And I wouldn't have realized that your student field trips would have limited explorations so much. Hmmm. What one gives up for one's students, eh? Thanks so much for sharing.

Thanks Celia. The trail to the alcove and waterfalls at the Lower Pool is a half mile and is ADA accessible, so it's quite possibly attainable if you ever get the chance!