Volcanoes, Lava Flows, Fault Zones: What Park is This? You Might Be Surprised... 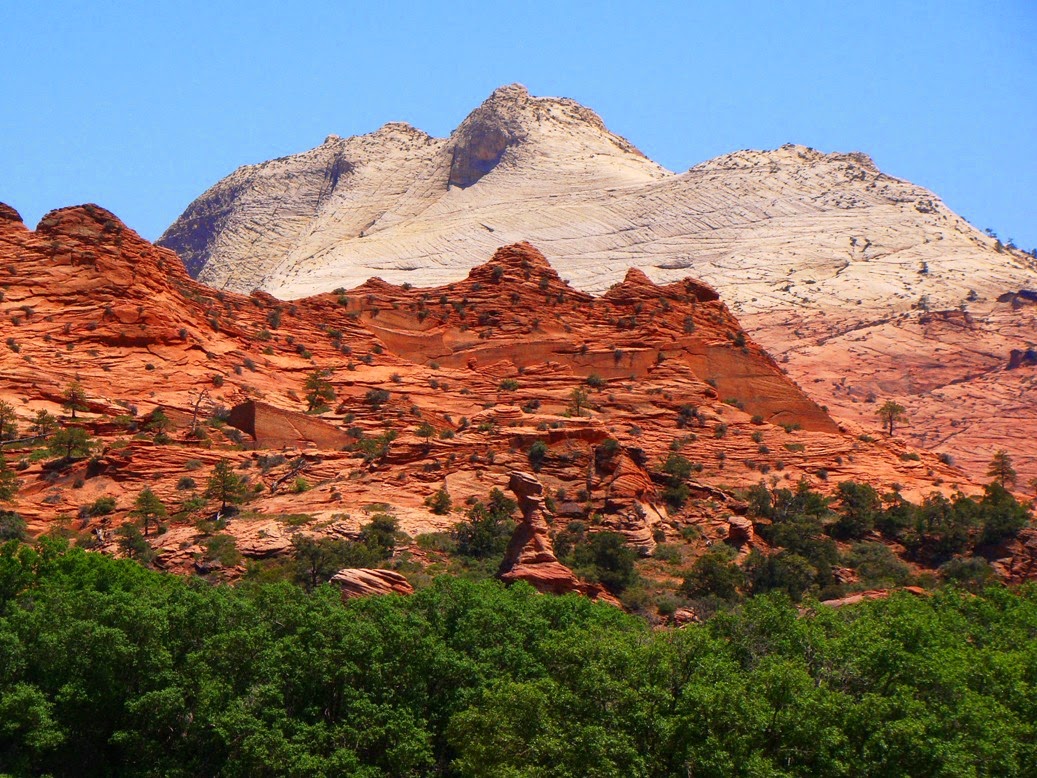 ...unless you've been following my latest blog entries, anyway. The beautiful exposures of the crossbedding in the Navajo Sandstone (above) provides another clue; we are in Zion National Park, but in a section that is ignored by probably 95% of the park's visitors. As far as I'm concerned, it can stay that way in perpetuity, because it is one of the more beautiful spots on the Colorado Plateau, and I'm not too keen on seeing it crowded and busy. But I'll share it anyway, because anyone who takes the trouble to get out to Zion and wants to escape the crowds for awhile deserves to know of this place. 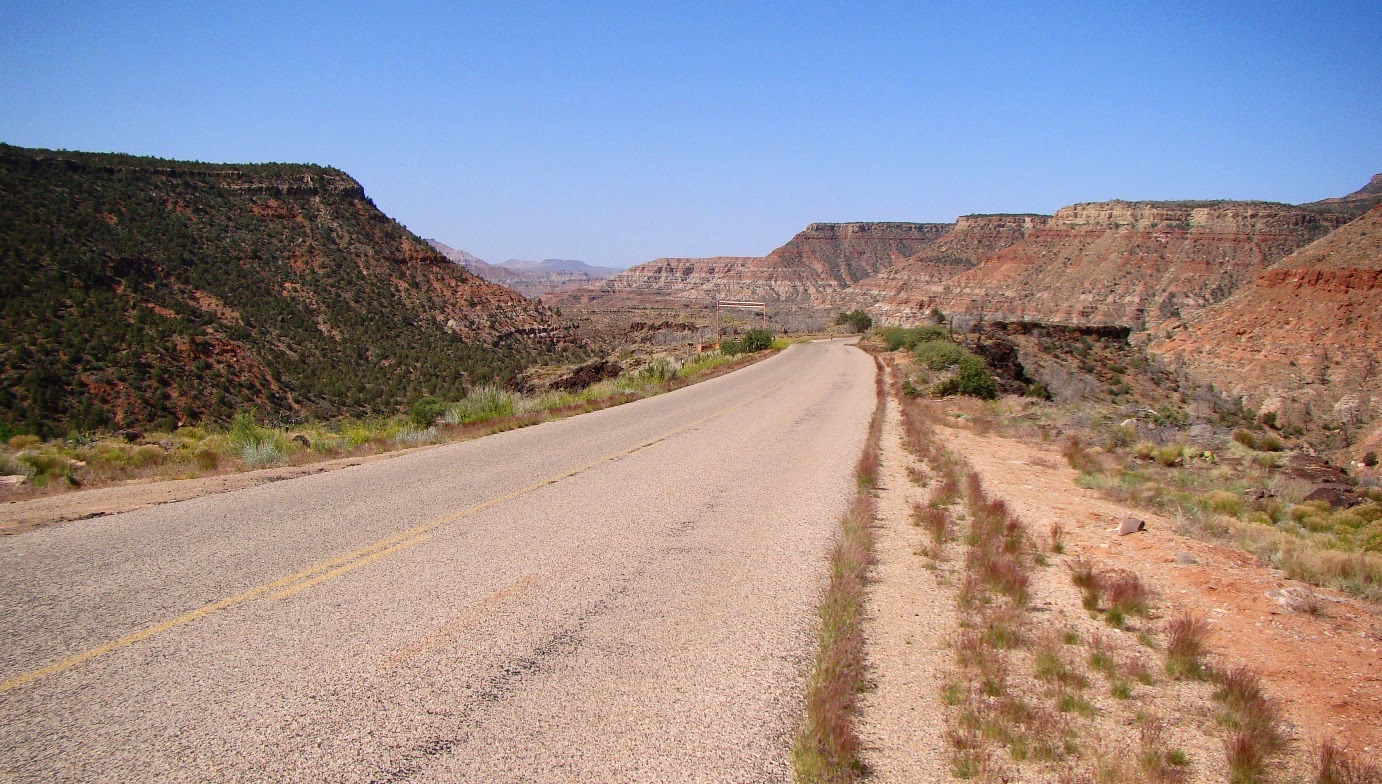 It's called the Kolob Terrace Road, and it takes one from the lowest elevations of the park to the highest, and from the end of the road at Lava Point Overlook, you get to look down into Zion Canyon. It is also the most geologically interesting part of the park, providing a look at the entire stratigraphy of the park, recent volcanic activity, and potentially active fault zones. For the biologist, it provides a range of biomes, from the desert to near alpine conditions. On a hot summer day, the high country is cool and green. There is even a small campground if you want to linger. Trailheads along the road provide access to "The Subway" and Kolob Arch, perhaps the second largest natural arch in the world.

The road starts in the village of Virgin and almost immediately does something unusual and spectacular. It climbs right up the middle of an inverted stream, a place where a lava flow filled a river canyon only to be attacked by erosion. The flow was resistant so new canyons formed on both sides, leaving the former bottom of a river as a ridge. It's a little tricky to see, but note how the land falls away on both sides of the road in the picture above. Some of the basalt crops out on the right. The rocks are the siltstone and shales of the Triassic Moenkopi Formation, one of the oldest layers exposed in Zion National Park 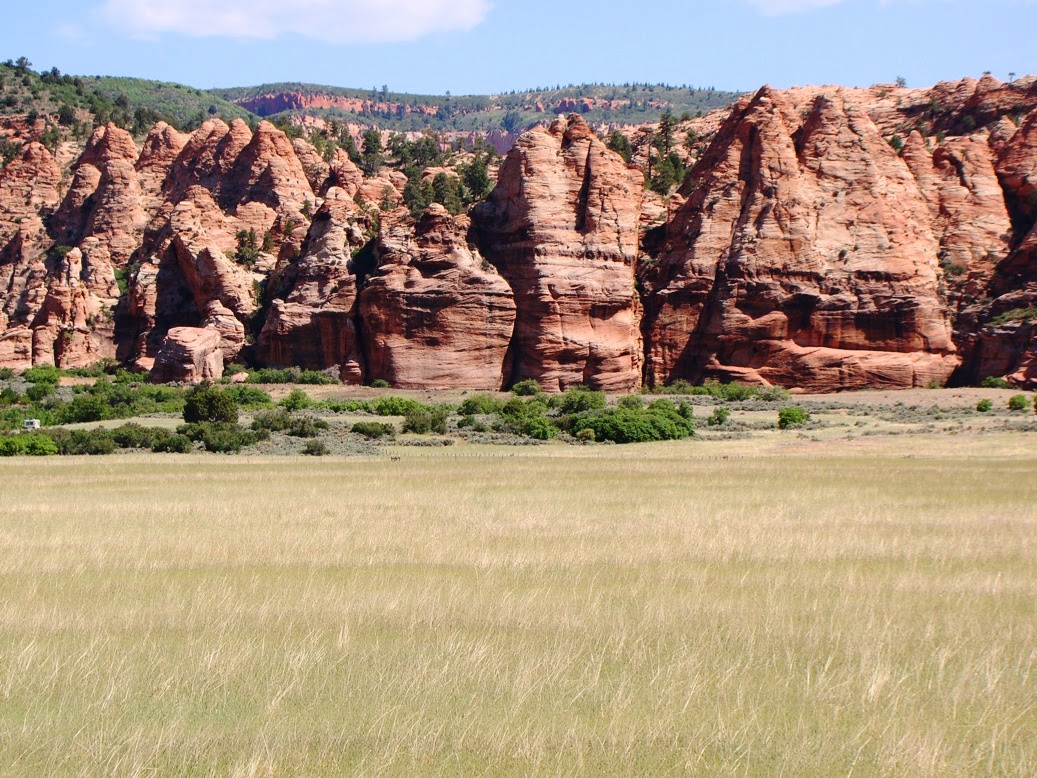 There are grassy meadows in Cave Valley, and intriguing "beehives" of Navajo Sandstone. The rounded dome-like forms aren't easy to see from the floor of Zion Canyon. At the end of Cave Valley we pass something unexpected: a cinder cone, Spendlove Knoll (below). It erupted about 220,000 years ago.

Why the volcanism? We are near the edge of the Colorado Plateau, at the faulted boundary with the Basin and Range Province of western Utah and Nevada. The stretching of the crust and subsequent fracturing of the rocks has provided an avenue for the molten magma to reach the surface. 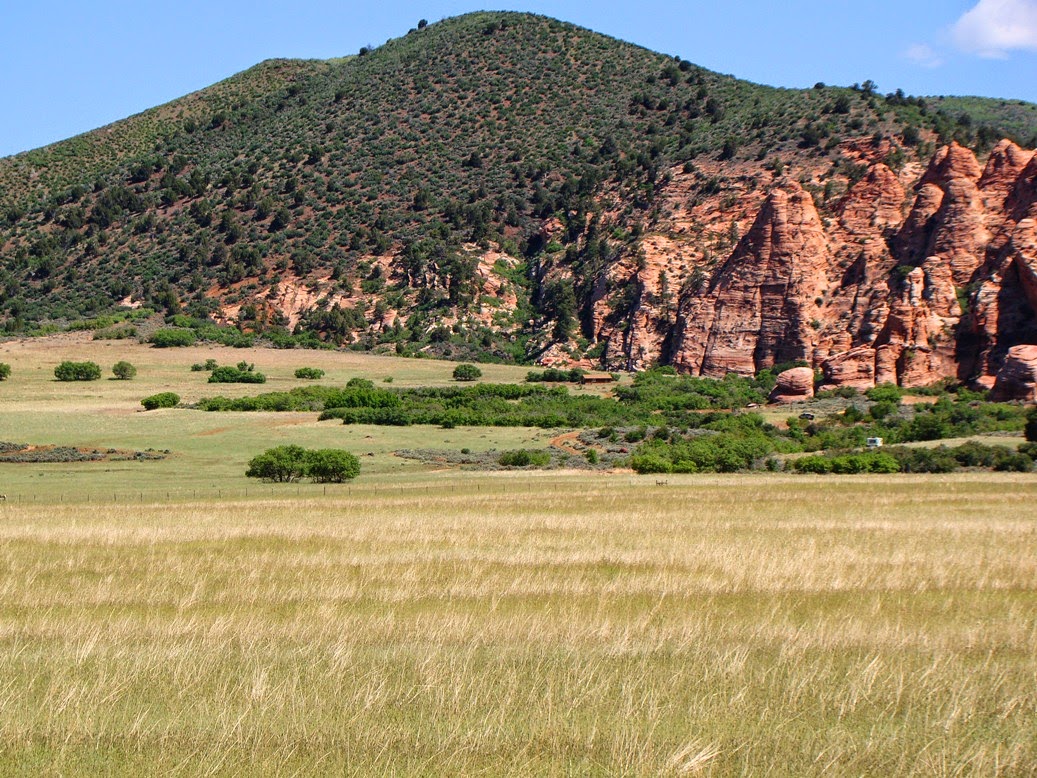 The scenery is on a grand scale. I'm pretty sure that some of the scenes from the 1979 film "Electric Horseman" with Redford and Fonda were filmed here (a movie I loved, and apparently Willie Nelson's acting debut). 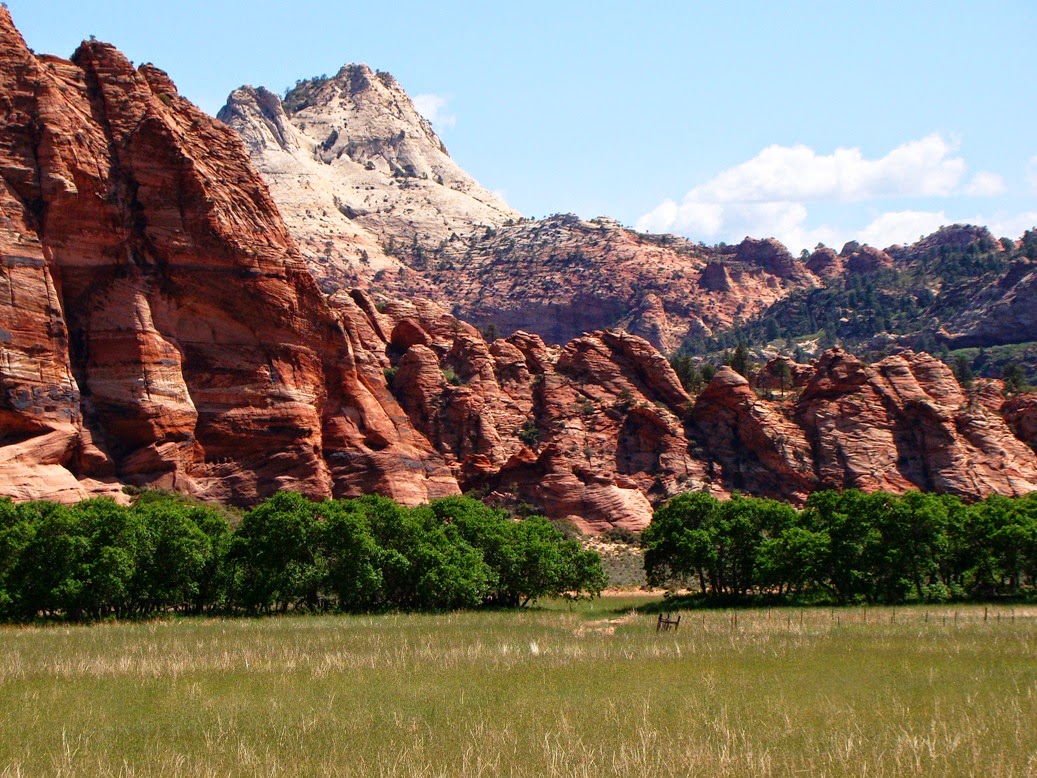 The road continues up the hill, passing between two volcanoes, Spendlove Knoll and Firepit Knoll. Firepit is about 290,000 years old. In the distance one can see the cliffs of the Kolob Canyons, another isolated and rarely visited corner of Zion National Park. The road passes back and forth through the boundary of the park; you always know you are in the park because the road turns red (from the use of red cinders in the asphalt). 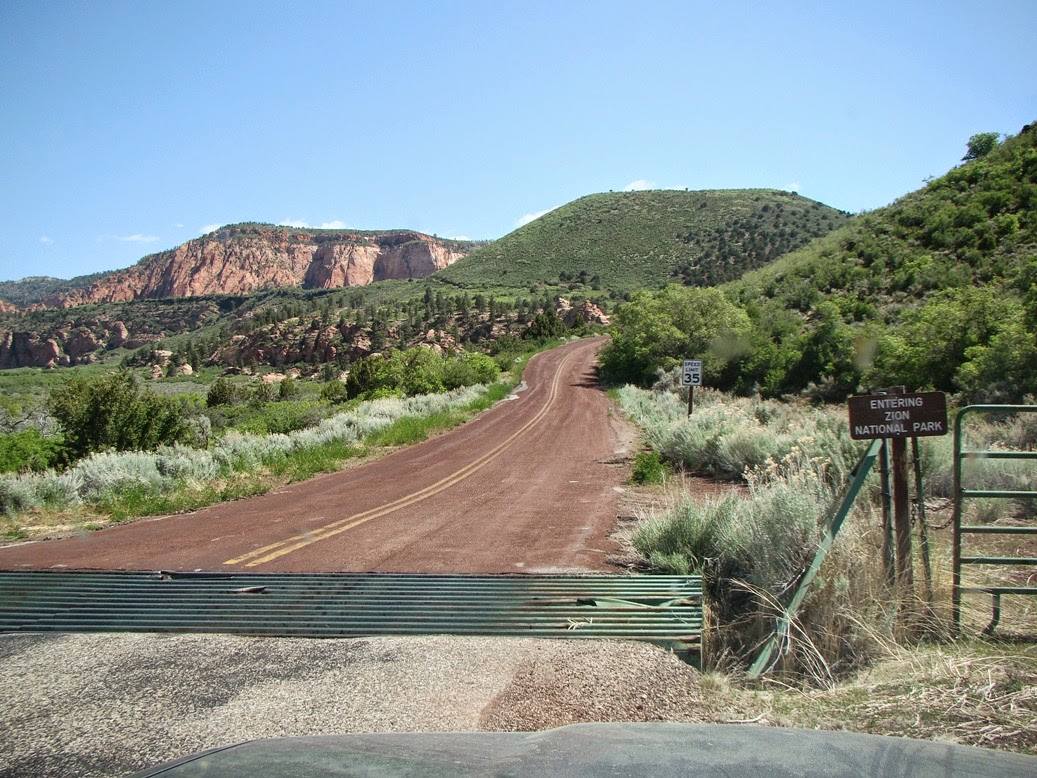 The rock outcrops of the Jurassic Navajo Sandstone are striking. The sloping layers are the crossbeds I mentioned above. They form on the steep leeward faces of sand dunes (the slip face), and the distribution of the Navajo and related formations show that this sand dune field once extended from Wyoming to Arizona, and from Colorado to California. There is no place quite like it today anywhere in the world.

Where did all the sand come from? Much of it probably came from the remnants of the Ancestral Rockies, or the incipient highlands related to subduction off to the west, but recent research suggests that some of the sand was derived from rivers with headwaters in the vast Appalachian-Caledonian mountain system in what is today the southeastern United States.
The road makes a long and very steep switchback (10 mph!) to climb another escarpment, and suddenly we are in a thick forest of ponderosa, firs, and aspen trees. Even in summer, the meadows were alive with colorful wildflowers, despite the parched conditions on the valley floors below. 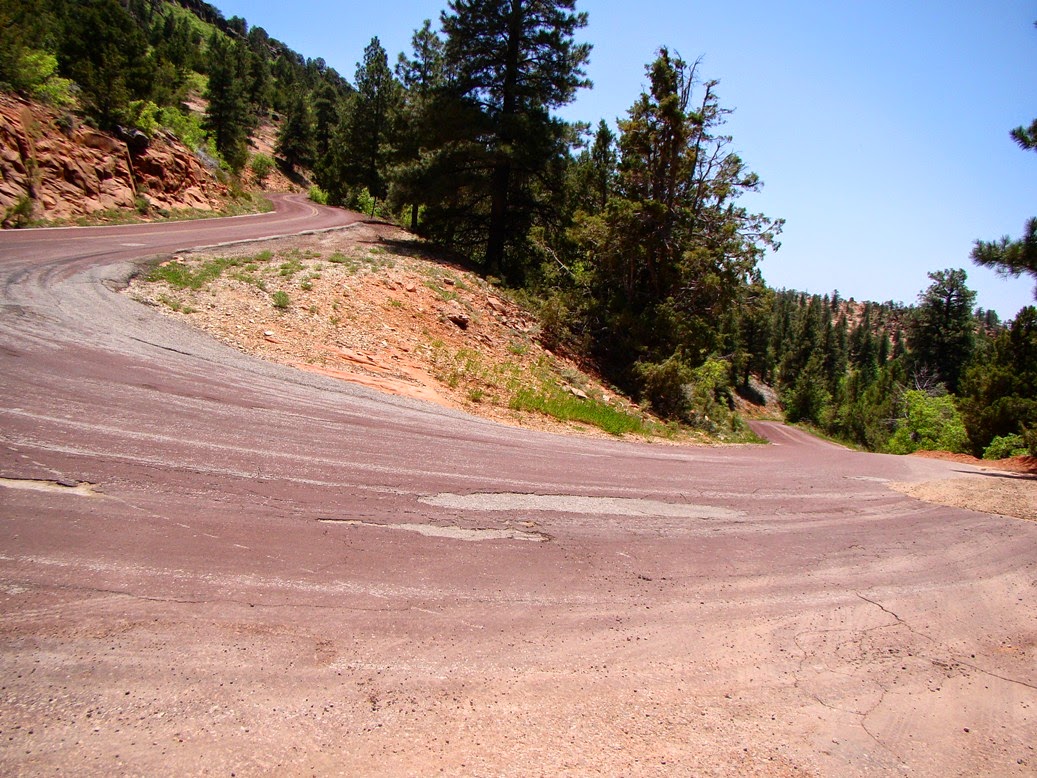 About three miles before Kolob Reservoir, a gravel road goes right towards Lava Point. I love the understated entrance sign for Zion National Park. There should be more like it. It was less than two miles to the campground and Lava Point Overlook at an elevation of 7,980 feet. At this point, the plateau is coated with basaltic lava erupted just over a million years ago, before the carving of Zion Canyon. 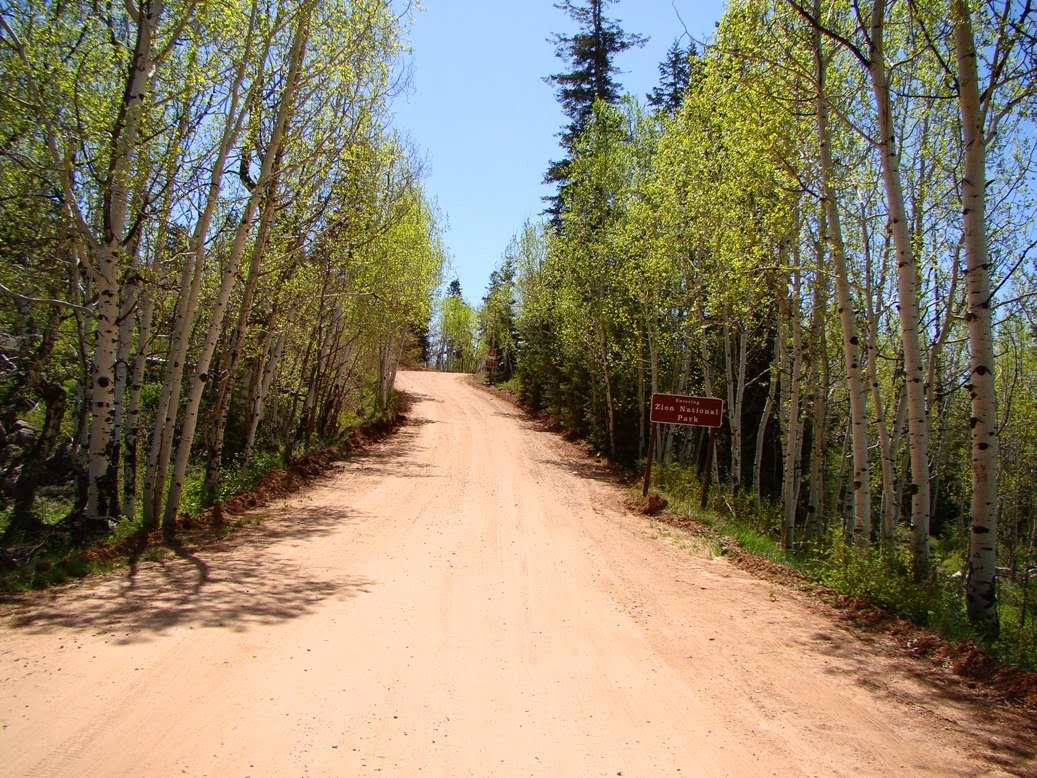 And we arrived at the overlook. The view, like so many others on the plateau, is expansive, taking in landmarks as distant as the Paunsaugunt Plateau of Bryce Canyon, the Kaibab Plateau and the North Rim of the Grand Canyon, and the endless Basin and Range. The valley floor of Zion Canyon is hidden deep in the folds below viewpoint. 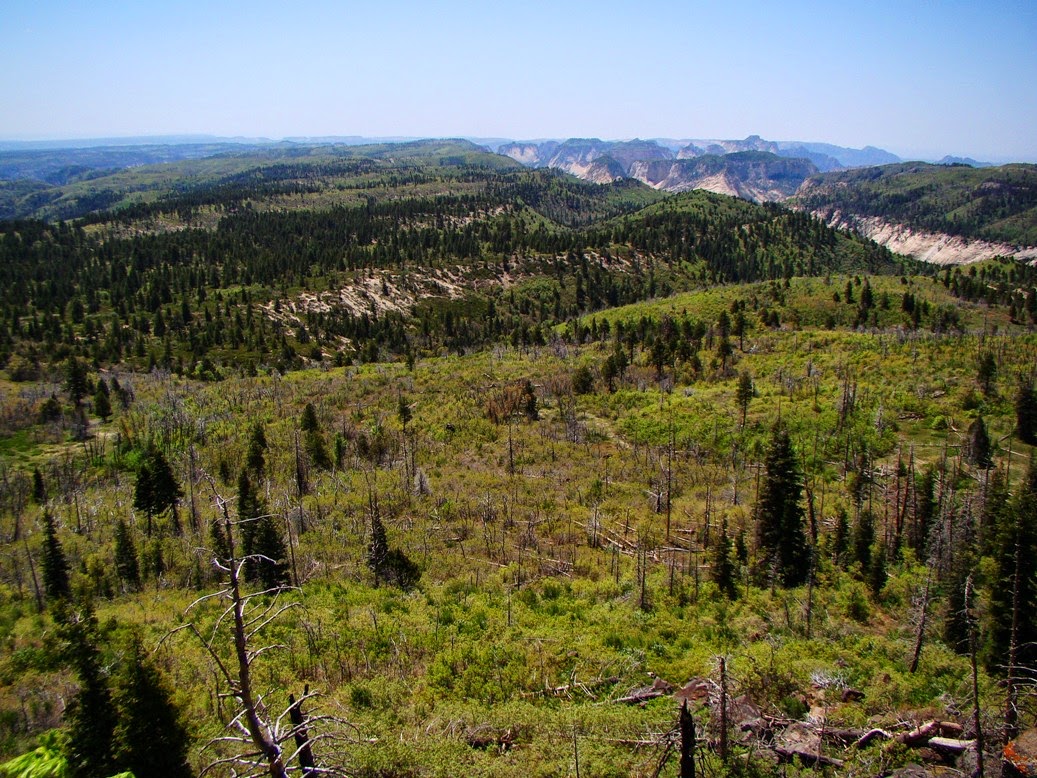 The lush greenery of the forests contrasts strongly with the barren slopes of Navajo Sandstone. It's a verdant world largely hidden from the majority of park visitors who never get out of the deep valley. It is a sight that also helps to explain an odd phenomena that often occurs in the middle of the night when one is camped in Zion Canyon in summer. It is almost like clockwork; at about 2 AM or so, a cool wind kicks up in what had been a warm and sultry night. It is a drainage wind, a mass of cool dense air with a source on the high plateau that is flowing down the canyon. 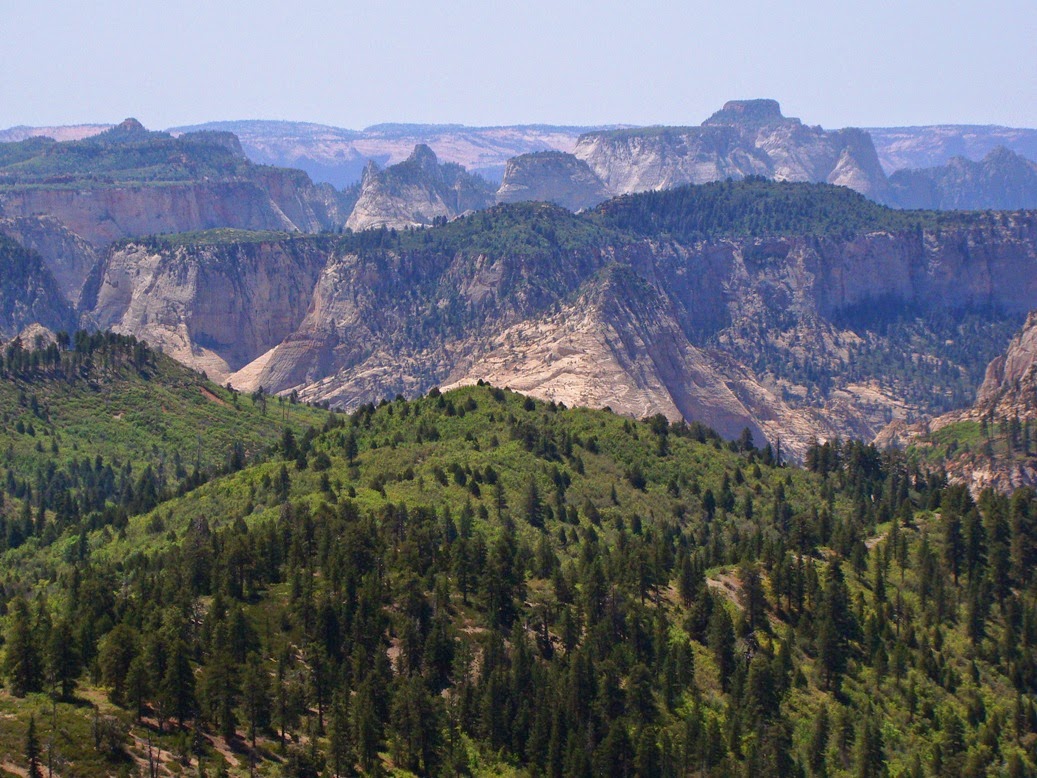 We finished at Lava Point and faced a hot three hour drive back to Las Vegas, where our travelers would be catching flights home. We still had another day of driving back through the Basin and Range, and our trip would be over. Look for one more post about Zion, though. Even though we didn't see it on this trip, there is another spectacular corner of the park to seek out.

Guess I really need to make that drive past the reservoir. Wow, what a view!