What is the most powerful agent of social change? If we are to judge by the accomplishments of one particular man in a life well-lived, that tool would have to be song. Pete Seeger passed away this week, and it set me thinking about how we choose to spend the time we have been allotted on this planet. 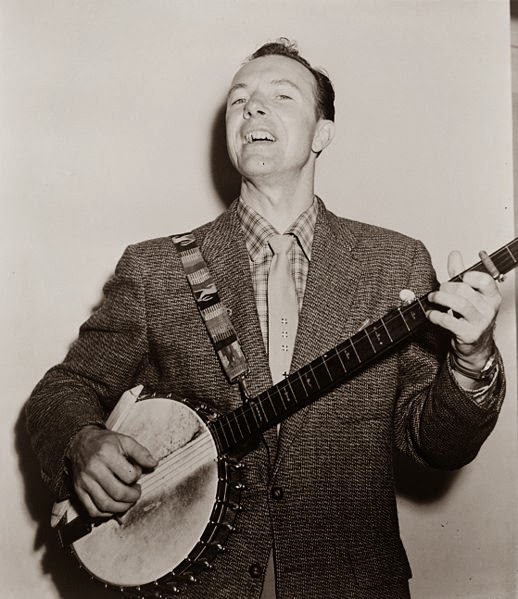 I can't know the inner life and motives of Mr. Seeger, but everything I do know of his life is that he used it to make life better for others. He spent his early years helping workers unionize so they could stand united to improve working conditions. He was known for his pacifism even though he served during World War II, briefly as an airplane mechanic, but later as an entertainer for the soldiers. He was involved in the nascent civil rights movement as well.

He made a number of successful albums with the Weavers (Goodnight Irene, On Top of Old Smoky, Kisses Sweeter than Wine, and Wimoweh are familiar tunes), but was blacklisted for his communist leanings in the 1950s. He had to support himself by teaching music and singing on college campuses around the country.

He was witness to and participant in some of the greatest movements in American society, and his anthems gave voice to those who had never before had a voice. He was instrumental in bringing We Shall Overcome to the civil rights marches of the 1960s. In 1968 he truly sang truth to power by performing Waist Deep in the Big Muddy on the Smothers Brothers show (censored a year earlier), which was a subtle and yet not subtle jab at LBJ and his war in Vietnam. He was deeply involved in the environmental movement, and the fight against the death penalty. His voice was gentle but persuasive.

These are all the kinds of things that one can read in a Wikipedia article (just sayin'), but Seeger's passing affected me deeply on a personal level as well. Music touches our lives in many ways, and Seeger's words and songs played a huge part of mine. I was a child when JFK and MLK were murdered, and I was only dimly aware of the massive marches in Washington over the war and civil rights. I became a teenager when "Kumbaya" wasn't a joke around the campfire, and "We Shall Overcome" and "If I Had a Hammer" held solemn meaning. Seeger's "Where Have All the Flowers Gone" was one of the first songs I ever learned on the guitar as I approached draft age at the end of the Vietnam War. 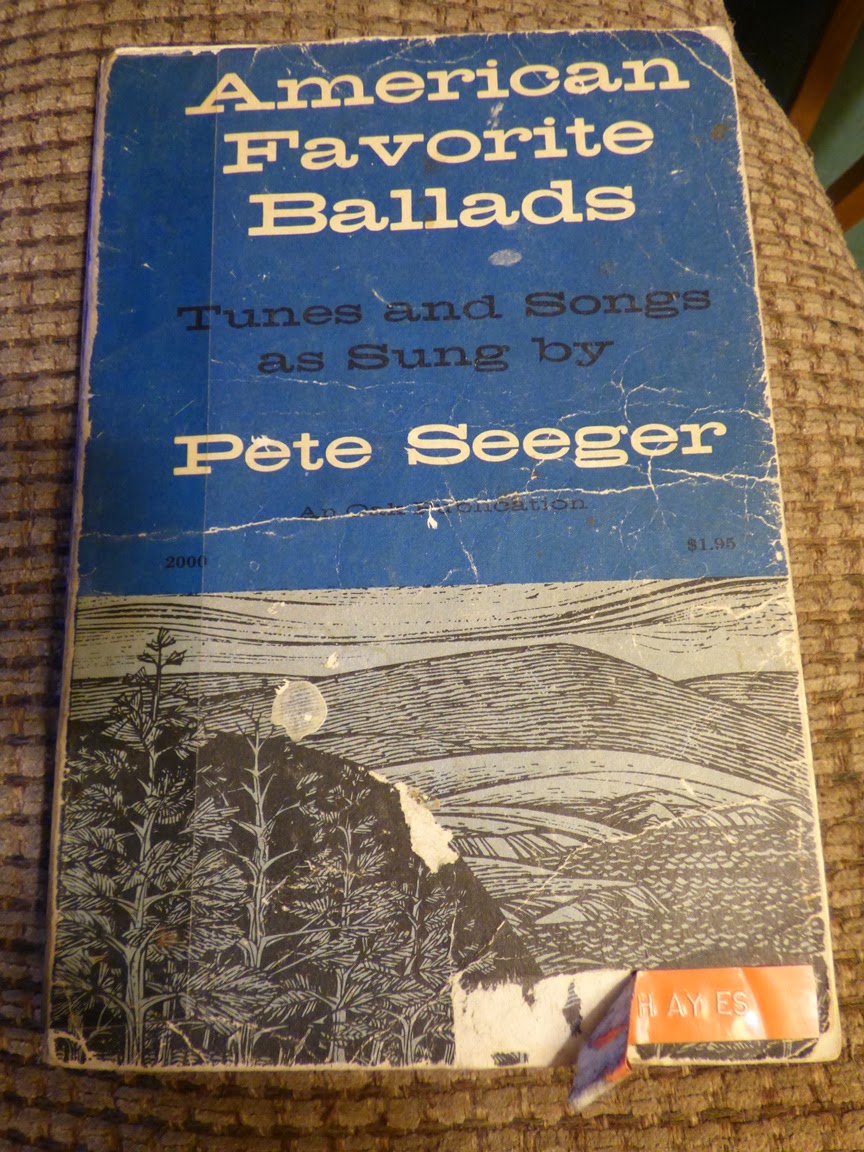 It didn't take me long to find one of my most treasured possessions when I was thinking about this entry. It's the little book pictured above, given to me by my parents decades ago. I learned American history partly through the music of my country, not the top 40 commercial dribble, but the words of real people in hard times and in hard places. Even today I subject my poor students (the geology students who join me in the field) to the music that is their real heritage. People may cringe when the guitar comes out, but the songs of the coal miners (Which Side Are You On? and Paradise) and fruit pickers (Deportee, Plane Wreck at Los Gatos) speak to the meaning of human existence and the need for social justice.


The passing of Pete Seeger and the heritage of his life really had me thinking. How dow we choose what we do with our lives? For many, there aren't many choices. Their lives are governed by the need for survival. But what about those who are gifted with a choice about the direction that their life will take? What drives the decisions they make? Money? Of course. Fame? Sometimes. But how often does that life choice involve altruism? Seeger ultimately led a comfortable life, but I sense that he was driven by a much more fundamental motivation. He wanted to make life better for those who had little or no hope.

I am a teacher, and sometimes I wonder what led me down this path. It would be foolish of me and a lie to say that the motives for my choice of career were altruistic. To be perfectly honest, it has been the most fun I can imagine in life. I have a good and secure job that is satisfying and often enjoyable. But my choices were influenced by my experiences in the environmental movement and exposure to the civil rights movement. I lived in a time when being a teacher or social worker was considered an honorable calling. I came of age when people realized that they did in fact have a voice and that they could make choices that could make their world a better place. Idealism was a real thing, and it drove people. As a teacher, I have the privilege of seeing the lives of my students change for the better, and I can have the satisfaction of knowing that I was part of the process. How many stock traders and investment bankers get to have that privilege?

Pete Seeger was an integral part of the movements towards a better society: acceptance of civil rights, the need for a healthy environment, and the need for peaceful resolutions to conflicts. He was a true American hero. He was most certainly one of mine. He stood up to those in power, facing down the House Un-American Activities Committee in a time when it was dangerous to do so. He had his career destroyed by those who benefited from the subjugation of workers and minorities. And yet he persisted, singing gentle songs of protest and encouragement to whomever would listen.  His banjo was one of the most dangerous weapons ever wielded in the defense of the poor and helpless (an inscription on his banjo said: "This Machine Surrounds Hate and Forces It to Surrender"). He lived a good and long life. I can only hope that we can be inspired to do the same.

If you've made it this far, I hope you will enjoy this video of Pete singing one of my favorite songs. He wrote of the hope that is not always visible or felt, but it's always there.

Don't you know it's darkest
Before the dawn?
This thought keeps me
moving on

If we could heed these early warnings
The time is now quite early morning
Some say that humankind won't long endure
But what makes them feel
So dog-one sure?

Thank you for writing this. I've been struggling with mixed feelings after Pete's passing, and agonizing reappraisals of my own choices...I feel privileged to have grown up in Beacon, NY, where he lived, to see him perform countless times, and to have met him a few times. I was born in '81. To most people my age Pete was just a kind old grandfatherly figure. He often sang with the kids at the local schools, and could be seen driving around town in his electric pickup truck. but I knew he was much more than that. It was comforting to me just knowing he was around.

Thanks for the comment! What a privilege to have been able to spend time listening/learning from Pete. It is fantastic to have had the chance to meet people who were such an important part of American history, but it also sounds like he was a really decent person as well.

Hey Garry, have you been to Los Gatos Canyon, the site of the plane crash commemorated in Deportee? If you haven't, you should go (and keep going - the terrain gets steadily better up canyon). I just discovered that the site of the crash is practically on our home turf, thanks to another blog (http://www.dickestel.com/losgatoscanyon.htm) and of course had to investigate. The plane crash story is interesting (and not quite as described in the song), and the story of tracking down the "nameless" deportees is cool too (http://timzhernandez.com/current-projects/).

Yeah, we miss Pete too.

Brilliant article I am writing an books and Pete Seeger features prominently in one Chapter. It a joy discovering not just about him but the legacy he passed to others. Its so inspiring and I don't impress easily.