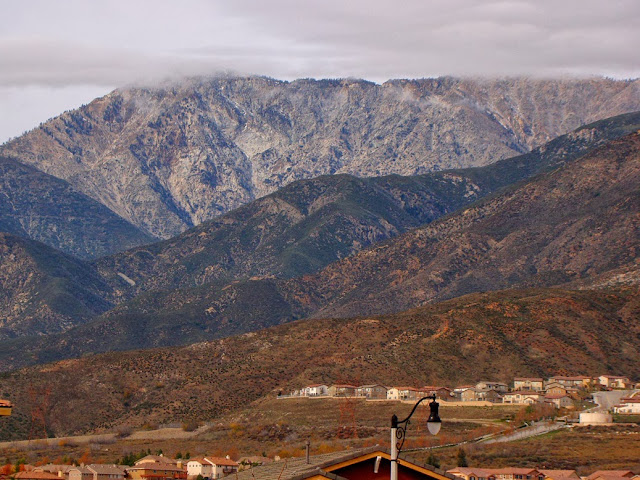 There was a magnitude 4.4 earthquake in southern California this morning at 1:35 AM, centered about three miles north of Fontana along the southeastern edge of the San Gabriel Mountains in a complex zone where three major fault systems intersect: the San Andreas, the San Jacinto, and the Cucamonga. Very minor damage was reported.

The picture above was taken relatively close to the epicenter area and shows the incredibly steep and rugged topography produced by the faults that have been active in the region. Cucamonga Peak on the left rises to an elevation of nearly 9,000 feet. The mountains have been pushed up in a very short period of time geologically speaking, only a few million years.

The focal mechanism suggests right lateral motion, consistent with the expected stresses on the San Jacinto fault.
There doesn't seem anything particularly unusual about the quake. As always, this region is traversed by several active faults that are capable of generating large damaging quakes. The San Jacinto has produced nearly a dozen magnitude 6+ quakes in the last 125 years, although most of the epicenters were well to the south of today's quake. The San Andreas fault is the more famous fault with quakes that are considerably larger, but also rarer. A magnitude 7.8 earthquake in 1857 was centered near Fort Tejon along Interstate 5, and around 1680 a very large earthquake ruptured the fault between Salton Sea and the Cajon Pass area. There may have been a serious earthquake here in 1812 as well. The recurrence interval for big quakes has been around 150 years so sufficient stress is currently built up to cause a serious event, so if nothing else, today's minor shaker is a reminder to be prepared for the BIG ONE (we always have to write it in big letters or something). Always keep an extra supply of water and food on hand, carry an emergency kit in your car, and have a family plan in the event that you are separated.

For the official information on the earthquake, check out the USGS page:  http://earthquake.usgs.gov/earthquakes/eventpage/ci11413954#summary