Birds of My Neighborhood: Geotripper Explores the Home Base on National Bird Day

I'm told that today is National Bird Day (thanks, Randall), which was convenient to today's post since I was already collecting pictures of birds from my last two days of neighborhood exploration. It was meant to be an addition to my post several days ago describing the surprising diversity of birds in my home town, despite the winter chill. The Great Valley of California turns out to be quite the refuge for winter survival of a great many avian species. We are far enough south to avoid the frigid chill of arctic storms, and most of our storms are gentle compared to the blizzards experienced in other parts of the country (with the occasional exception, of course).
But really, birds in a geology blog? What connection could there possibly be with the study of rocks, minerals, and fossils? Oh, yeah, fossils. Birds have been an important part of the web of life on this planet for more than 100 million years, and were the last of the major families of terrestrial creatures to emerge. They are literally the last dinosaurs, but as such they are particularly successful and diverse dinosaurs, and most certainly not a failing evolutionary dead end. And they apparently almost displaced mammals as the apex predators in the terrestrial environment several tens of millions of years ago.
After the "regular" dinosaurs met their demise at the end of the Cretaceous Period (possibly as a result of an asteroid impact), the subset of feathered avian dinosaurs were some of the survivors that expanded and evolved to fill a world with many empty environmental niches. Mammals were quickly evolving to fill those same niches, and for a while there were some gigantic land birds that were the top predators of their time. Eventually their places were taken by large mammals and crocodile-type reptiles, but the birds mostly took to the air and became one of the most diverse vertebrate animal groups in the world today.


Today, birds are an integral part of any terrestrial ecosystem, and their relative health is a barometer for all life on our planet. There is a great joy in observing the incredible diversity of these fascinating creatures, but the diversity and future survival of these animals is threatened from habitat destruction and hunting. That's probably more true in the Great Valley of California than for about any other place on the planet.
The Central Valley (the term is interchangeable with Great Valley) is one of the world's great savanna-grassland-riparian habitats and was once a paradise for numerous bird species and other animals. The vast wetlands were historically a critical stop on the migratory flyway for hundreds of species. Unfortunately for the birds, the rich soils and ample water supply from Sierra Nevada rivers have meant that most of the valley has been co-opted by humans for agricultural development. Only 5% of the original habitat still exists. This has meant huge changes in the ecosystem, with many species that have disappeared, and others that have prospered.
Humans added all kinds of mayhem by introducing new bird species for spurious and stupid reasons. One of the worst: a man in the 1890s who resolved to introduce to the New World all the birds mentioned in the works of Shakespeare. He arranged for the release of several hundred European Starlings in Central Park. They have since spread across the continent like a plague, displacing dozens if not hundreds of species of native songbirds. Other birds arrived as pets which subsequently escaped (flocks of parrots live in the LA Basin, for instance).

Despite the horrific pressure brought to bear on the native species of California, there are many bird varieties still to be seen in the Great Valley. I have become aware of this delightful fact over the last few weeks as I explored my own local neighborhood with a new camera with a nice optical zoom. We've always had a feeder in the backyard, which caused me to think that the only local birds were goldfinches, house finches, scrub jays, and mockingbirds. A new habit of walking around the nearby cow pasture has revealed a real menagerie of beautiful and interesting species.

So today's post (and my post from several days ago) is a celebration of National Bird Day, with fifteen species that I was able to photograph in just two days of strolling around my neighborhood. Some I've seen before, and many I have never noticed. I never would have guessed that two, and maybe three species of woodpecker live on my block!

Some of the birds are skittish and shy, and others look at you and don't give a rat's posterior that you are standing there photographing them. And then there are the crows and ravens. You look at them and you can see them thinking and hear them talking about you...they are said to be the smartest of all birds, and I pretty much accept that way of thinking.

And never forget: these little fellows are dinosaurs. Only they're smarter... 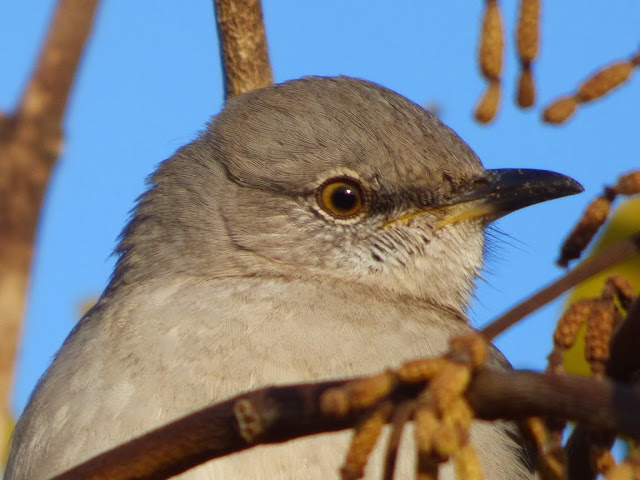 Congrats on becoming a birder. Might be interested in e-bird for tracking your sightings and science. New camera is taking some mighty fine pics.