Into the Great Unknown: Cloudburst (x2)! And Off We Go. 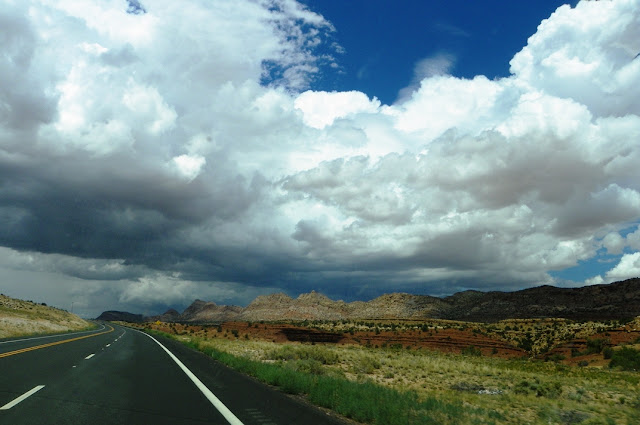 It was time to begin our journey down the Colorado River, or as John Wesley Powell put it, going down the "Great Unknown". In his day, no one had been down the river. But since Powell's epic trip in 1869, a half million people have made the journey, and there is an entire library of books, maps and guides describing each rapid and eddy in the river. Today the river is "known".

But to me it was still the "Great Unknown". To someone with absolutely no whitewater rafting experience, the Colorado River might as well have been on Mars. Book knowledge is helpful in setting a frame of mind about traveling down the river, but preparing you for the experience? One might as well try to learn Judo from a book. I was quietly apprehensive as we drove north from Flagstaff towards the take-in at Lee's Ferry.

One doesn't exactly drive up and jump into a raft. With so much traffic on the river, there are regulations designed to space groups out, so a trip begins with an afternoon rigging, a night on the banks of the river, and a morning briefing and inspection by a National Park Service ranger. Once cleared by the ranger, the expedition can begin.

As we drove along, we couldn't help but notice the towering cumulus clouds ahead of us. The Arizona monsoons were in full flower, and it looked like we were going to have some serious rain activity. 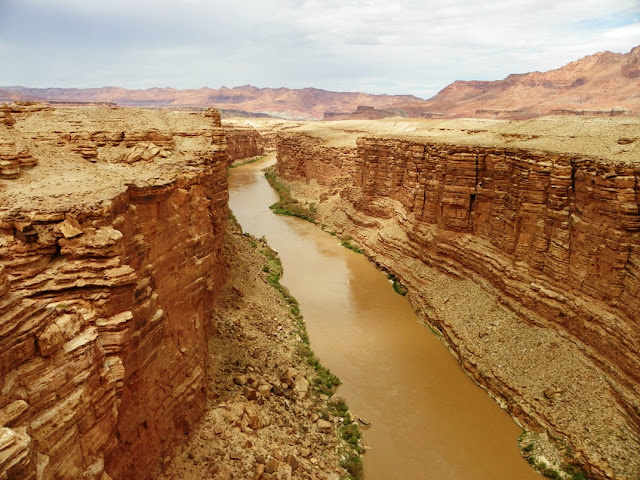 We crossed Navajo Bridge just outside Lee's Ferry and stopped to have a look at the river, 470 feet below us. This brown water would be our home for the next 16 days. We watched another group float by, thinking how that would be us the next day. The river is calm in this stretch, but we could still see numerous eddies and upwellings that belied the apparent calmness of the river. 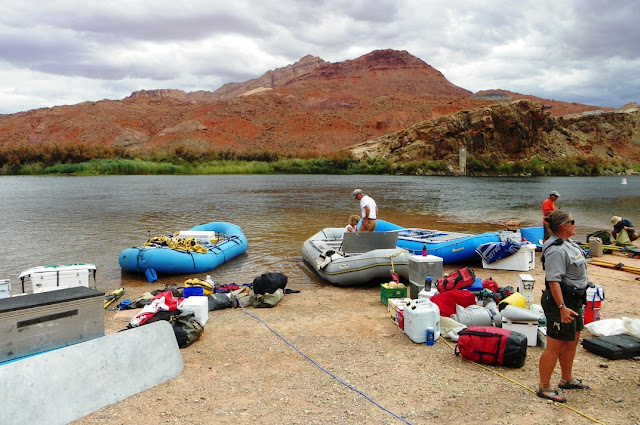 We arrived to find a flurry of activity as the rafters prepared their rigs. At this point there wasn't a lot to do except stand ready to hand over equipment and luggage, or fill water jugs. Oh, and cull down the stunning amount of stuff we had in our luggage. I pulled one item after another from the dry bags, and then pulled more, and when we handed them over to be loaded on the raft, they got lifted up, heavily, and eyes rolled. Rookies....

For future reference, Garry, you can get by nicely with perhaps half the stuff you brought this time.

The first storm hit with a vengeance. I was surprised for a moment that no one seemed upset that their stuff was getting all wet. And then I remembered that everything we had was expected to get wet. We were going down a white-water river after all. I took my camera and other sensitive stuff to the big shade structure to wait out the storm. 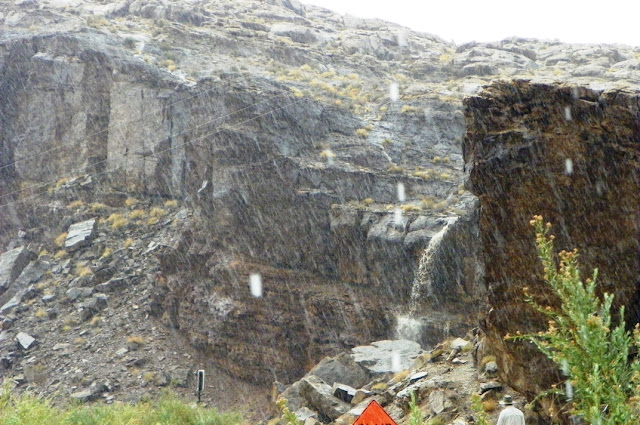 This storm was big. One maybe needs to understand that I come from California's Central Valley where we get maybe one or two thunderstorms a year, but even our Arizona travelers were impressed with the downfall, the thunder, and the wind, which sent raindrops hurtling sideways. Within minutes there were dozens of waterfalls coming off the cliffs around us.

We would not know it for two weeks, but the series of storms around the beginning of our trip caused havoc in the region. Check out this video of the simply unbelievable flooding at Antelope Canyon and Page, Arizona that took place during these few days. Antelope is a slot canyon 50-100 feet deep, and it was filled over the brim. We would also see side canyons downstream forever changed by debris flows. 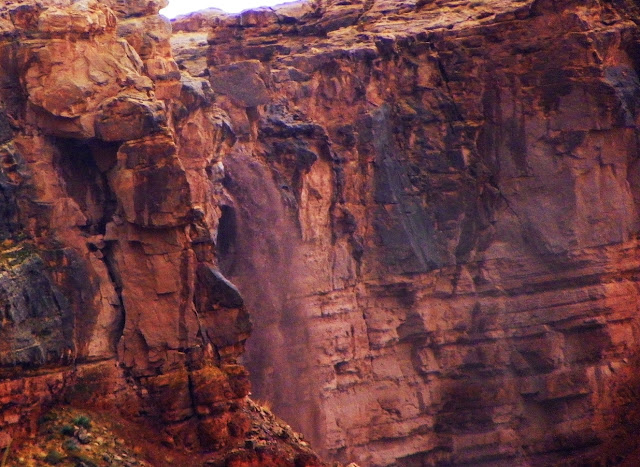 For us, the storms brought about beautiful waterfalls, and being the first rainfall of the season at Lee's Ferry, also brought out a veritable zoo of toads, frogs, lizards and bugs along the river. A beaver swam by (I finally realized why saplings around the riverbank had wire mesh wrapped around them). 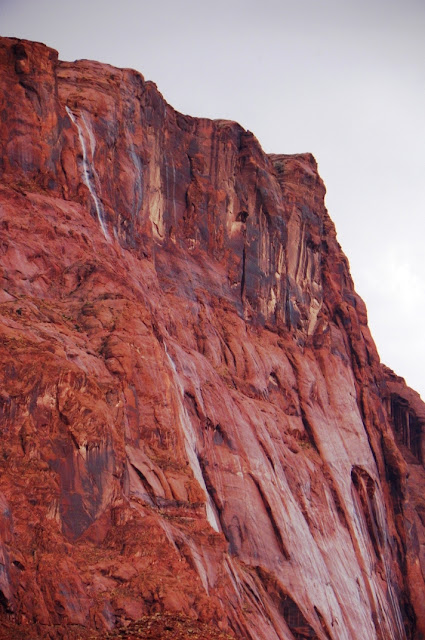 The storm eventually subsided, and we made our first boat journey...150 yards downstream to the river camp. We set up tents (expecting more rain), and drove down to Cliff Dwellers Lodge for dinner. The night was cool and humid, in sharp contrast to the sweltering August temperatures I was expecting. There was even mist rising on the river (see the picture in this post). I slept...okay.

The morning included an impossibly beautiful calm river with the brilliant Vermilion Cliffs in the distance. The cloud cover promised rain, however. We packed our gear, loaded the rafts, and rowed back to the take-in for the ranger briefing. Once could tell the veterans from the rookies at the briefing: the veterans looked like glassy-eyed airline passengers sleeping through the emergency procedures, while the rookies like me hung on every word with widening and fearful eyes. Scorpions? Rattlesnakes? Deadly Rapids? Flips and upsets? Norovirus? Wait, what the heck is Norovirus? Ah, the reason (among many) for the almost OCD-like compulsion to wash hands over and over in camp. What could be worse than a highly contagious intense gastrointestinal disease spreading through camp, short of broken limbs or death? 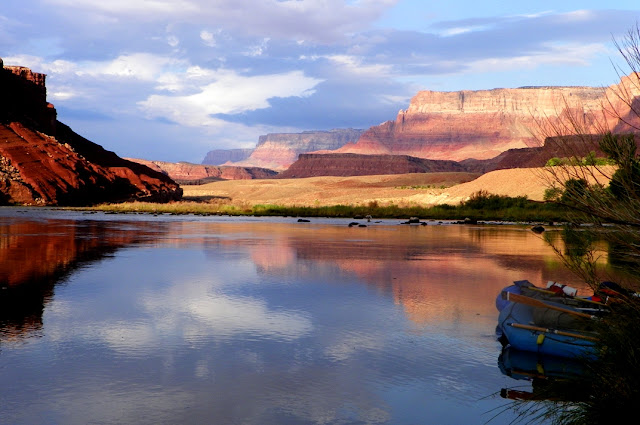 As the ranger finished her briefing (it wasn't really brief, by the way), the second massive cloudburst hit. It was more intense than the first, and within a few minutes the insignificant drainage next to the take-in was flash flooding. In the picture below, you are only seeing the overflow portion. I could hear cobbles bouncing along the streambed in the main current. A couple of kayakers couldn't resist playing in the surf. 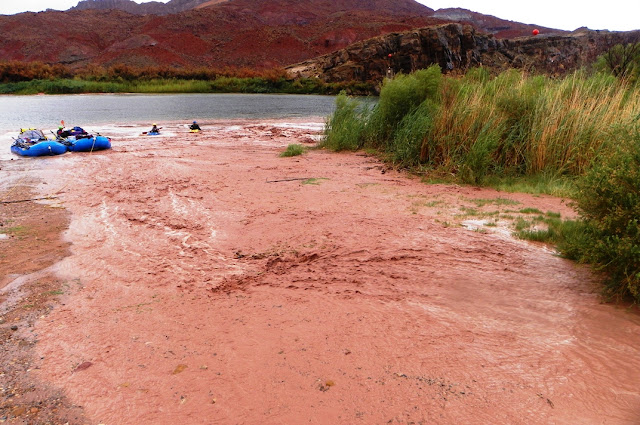 Once again we retreated to the shade structure and waited out the storm. When it cleared, we were clear, too. Clear to go. 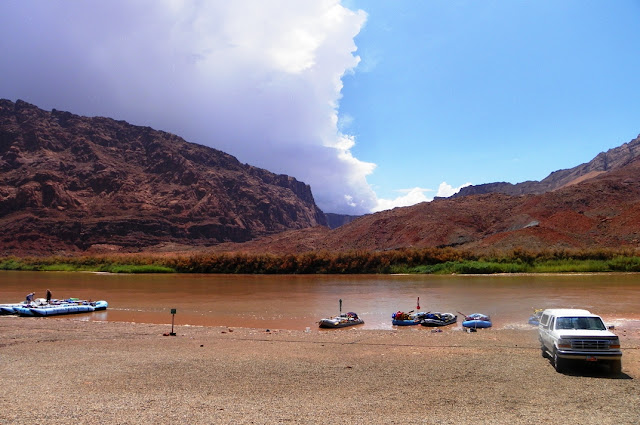 I donned my lifejacket, had a "before" portrait taken, and we took our places on the rafts. I was the sole passenger on Pete's 15-foot NRS self-bailing raft (self bailing is a wonderful feature). Pete is a professor at a small college where he is now a dean, but he also teaches a class in literature of the outdoors. He also has a farm. And to my delight, I found out he had brought along a guitar and collection of harmonicas.
We determined the order of the six rafts (we were to be last, as we carried the biggest first aid kit), and one by one the boats were pushed off, and our journey had officially begun. 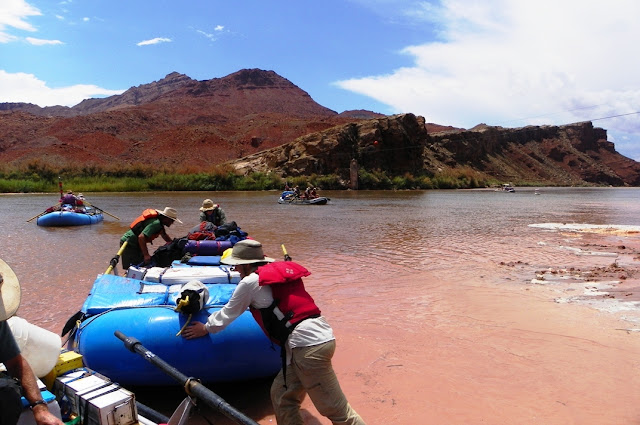 At that was that. With a last look toward the loading area at Lee's Ferry, we left behind all trappings of civilization for the next week. We would have no contact with society until we reached Phantom Ranch in the depths of the Grand Canyon in 8 days or so. 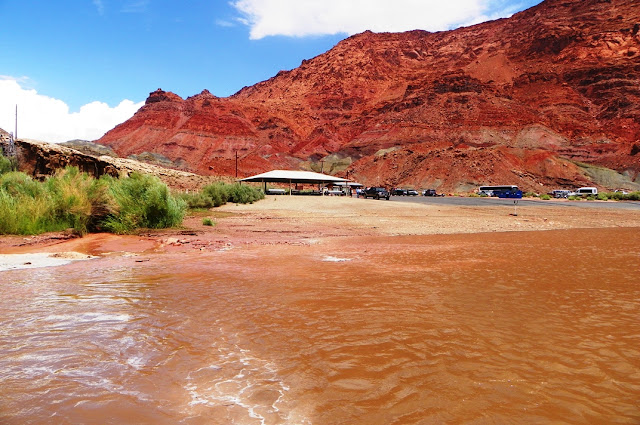 I'm loving this trip, Garry! Glorious photos - watched the video of crazy flooding in AZ as well. Aren't the colours of the canyons gorgeous? So alive.

That was a crazy storm.