Into the Great Unknown: We Interrupt This Scenery For a Very Recent Flash Flood and a Biological Disaster 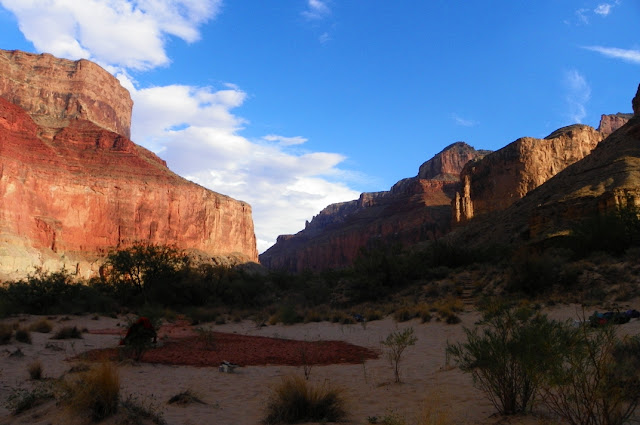 After our fourth day on the Colorado River, we pulled into camp at Little Nankoweap Creek. The camp was in a beautiful location (as nearly all of our camps were), but as I selected a campsite, my attention was captured by an oddity. There was a huge splash of reddish brown mud laid across the sandy campsite like the edge of a lava flow. What was going on? 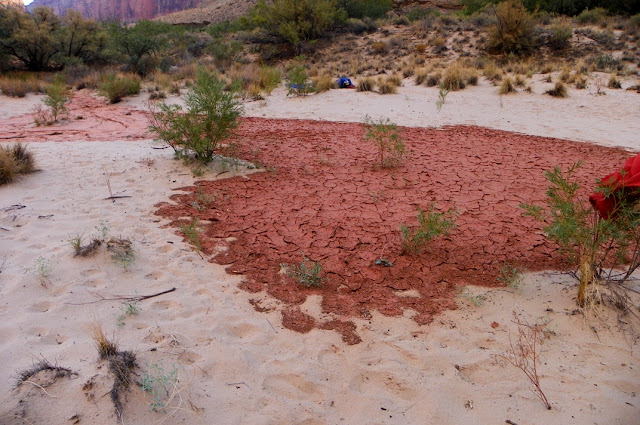 I realized I was looking at some of the very real results of the monsoon storms of the last five days. While Page was getting pounded and nearby Antelope Canyon getting flooded (events we didn't hear about until much later), numerous tributary canyons to the Colorado River were also being flooded. We were the first to see what happened at Little Nankoweap, as there were no footprints anywhere on the new flood deposits. It was no disaster in the big picture of things, but it was a marvelous small scale example of how the Grand Canyon got grand.

Flash floods and debris flows are the tools that erosion uses to deepen tributary canyons and widen the big canyon as a whole. Rock falls and avalanches choke the bottoms of gulches, and every decade or two a cloudburst sends torrents of water down the creeks, forming a slurry mix of mud and rock capable of transporting gigantic boulders. These masses of boulders get dumped in the Colorado and end up blocking parts of the channel, forming the characteristic pools and rapids. The spring floods that once surged through the big canyon would ferry the boulders downstream or grind them into sand and silt, and in this way, the Grand Canyon took shape. 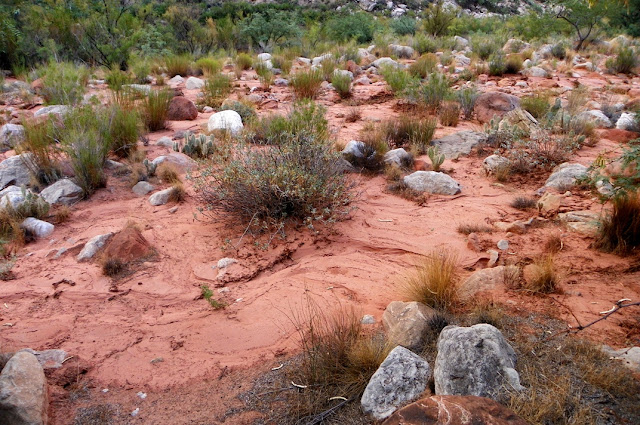 I had to take a closer look, knowing that the small mud deposit in camp was simply an overflow from the main channel. At the height of the storm, the mud was flowing over a wide area. The main channel (below) was being scoured, and rocky debris was flowing into the Colorado. 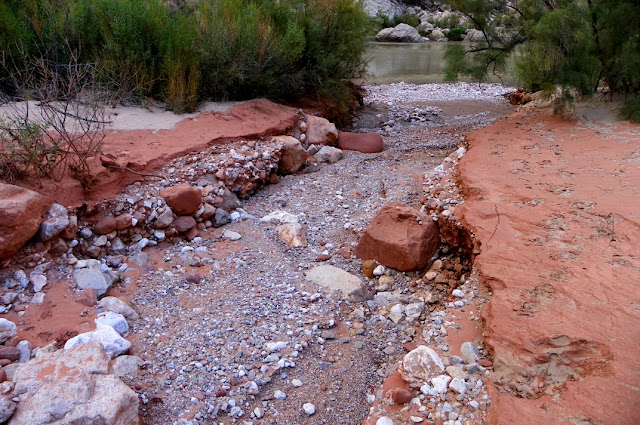 In the aftermath, a small rocky delta had formed, and the course of the river slightly changed. This particular event would soon be erased by the normal flow of the Colorado, as it was composed mostly of easily moved pebbles. I imagined the same event magnified several times, as in a once-in-a-century storm, and could see in my mind gigantic boulders changing the river on a larger scale. One of these events happened in 1966 at Crystal Rapids, turning a former riffle into the most terrifying rapid on the river (aside from Lava Falls). 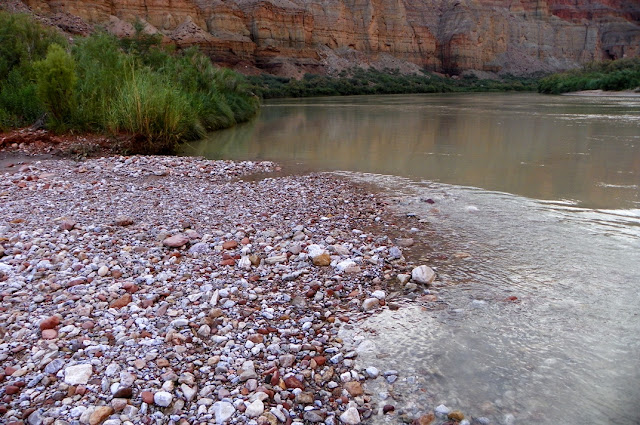 We explored the channel for some distance, and found the Nankoweap Trail where it crossed the streambed. It wasn't there anymore. 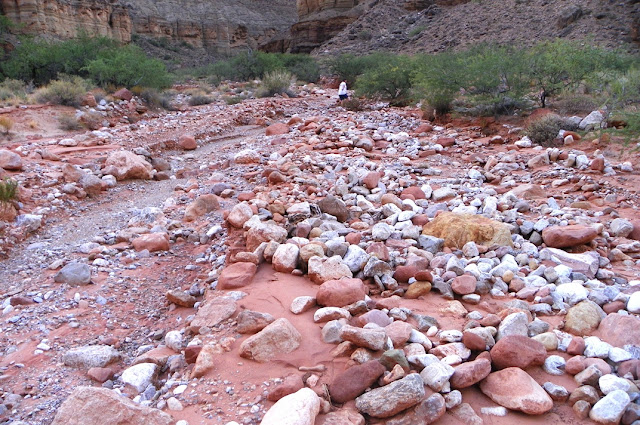 The rocky steps the trail utilized to climb out of the channel had been removed by the flood (the trail is a bit left of center in the picture below).

We headed back to camp for a delicious meal of fish tacos, and hit the sack. 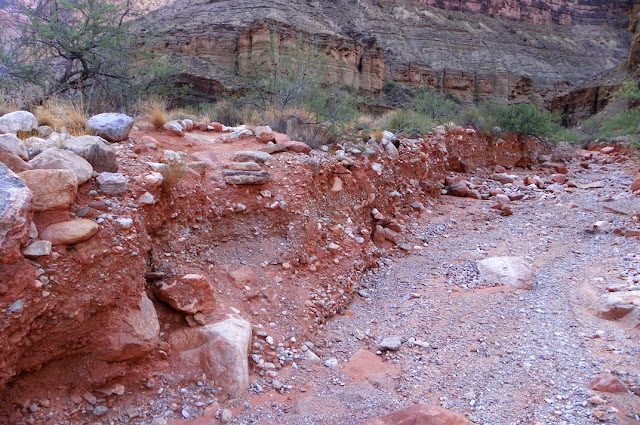 In the morning, I was covered with bugs. Or more properly, bug larvae. There were hundreds of them on my tarp. They were crawling all over the tamarisk tree I had camped under, and wriggling in the sand at my feet. I asked what they were, and our trip botanist pointed out that they were tamarisk beetles, and I immediately understood what was going on.

Tamarisk trees (also called salt cedar) are found all over the American southwest along river courses, but they aren't a native species. They come out of Eurasia, and having no natural enemies in their American environments, they have proliferated to the detriment of practically all competing species. They concentrate salt on their leaves which ends up in the soil, preventing the growth of other plants. They tend to form impenetrable thickets on river floodplains. They don't offer much in the way of food or shelter to most native species, and with deep taproots, they tend to transpirate vast amounts of precious groundwater into the atmosphere (some estimates put the water loss at 2 to 4.5 million acre feet per year across the southwest, enough to meet the needs of 20 million people, or to irrigate 1,000,000 acres). Some desert rivers stopped flowing on the surface after being invaded by the tree. 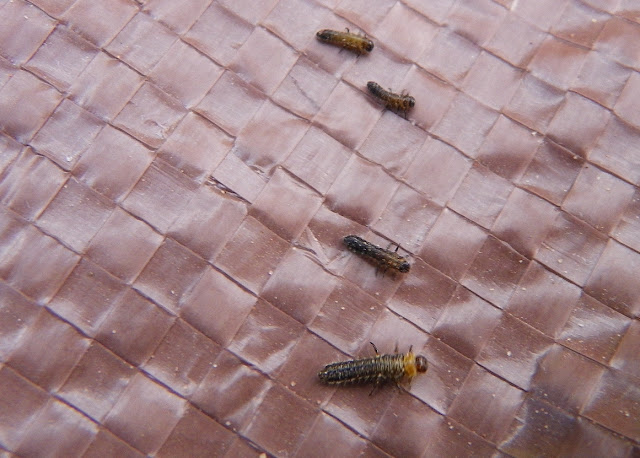 What's worse is that they are hard to kill. Cut them down and the taproot sprouts vigorously. Apply herbicides and many times they will sprout again anyway. A single plant might produce 500,000 seeds a year, and they can travel down the river, sprouting as they come to rest in wet sand.

I had noticed when we left Lee's Ferry that some of the tamarisks were looking a bit yellow (below), but didn't give much thought to it. It turns out that the Tamarisk Beetle loves tamarisk leaves and nothing else. After years of testing, the (also non-native) beetles were released into the wild, and they began an effective campaign of slowing the growth and spread of the tamarisk in the wild. And unlike some other such experiments, the bugs didn't start eating other native species. It is a reasonable hope that the bugs might one day lead to control (but probably never eradication) of the tree. 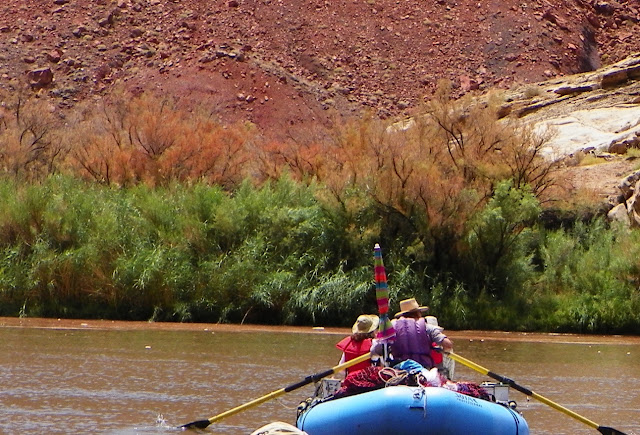 The trees actually provide some welcome shade in many of the river camps, but so would willows, cottonwoods, and mesquite trees if they weren't getting crowded out. 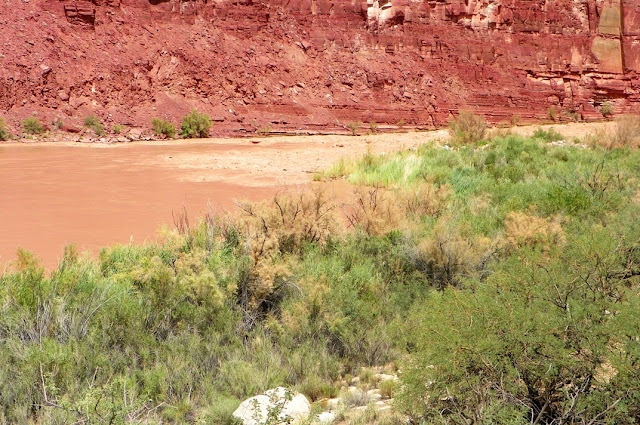 On the way back to camp, I spied an orange-breasted bird in the catsclaw acacia. I snapped a picture, and thought it might be a nice way to end a post that might seem a little depressing. But then... 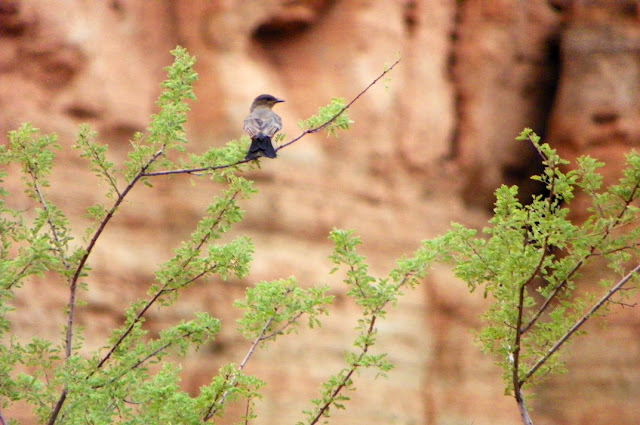 ...a rather majestic buck wandered through the edge of camp. So I will end with him instead. 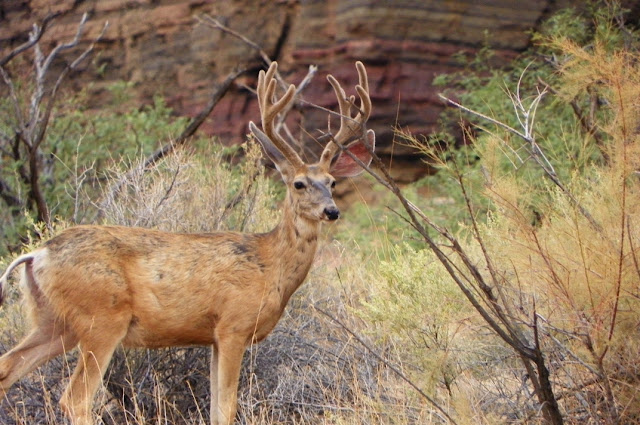 In the next post, I get to see one of the incredible iconic sights of a Colorado River trip.
Posted by Garry Hayes at 9:35 PM

I bet those tamarisk-beetle grubs are good eatin', too.

At nearly 200 square miles, the massive fire is swallowing everything in its path, threatening more than 4,500 homes, buildings and campsites and burning more than 125,000 acres.

On Saturday night, officials in San Francisco were monitoring the situation closely.

The fire is threatening some of San Francisco's vital utilities. The city owns power lines just outside the fire zone, and 85 percent of its water comes from the Hetch Hetchy reservoir, which is about 4 miles from the inferno.

The flames have already shut down two of the city's hydroelectric power plants. Gov. Jerry Brown has declared a state of emergency.

More than 2,600 firefighters and a half dozen aircraft are battling the blaze.

Those larvae look just like a "swarm" I saw near Soldier creek in the San Gabriels. They were everywhere, crawling towards the creek. I couldn't figure it out. I felt dumbstruck seeing your picture and flashing back 2 years ago. Glad I'm re-reading your blog.