Into the Great Unknown: In the Depths of Grand Canyon, There are Three More Grand Canyons...Checking out the Supergroup 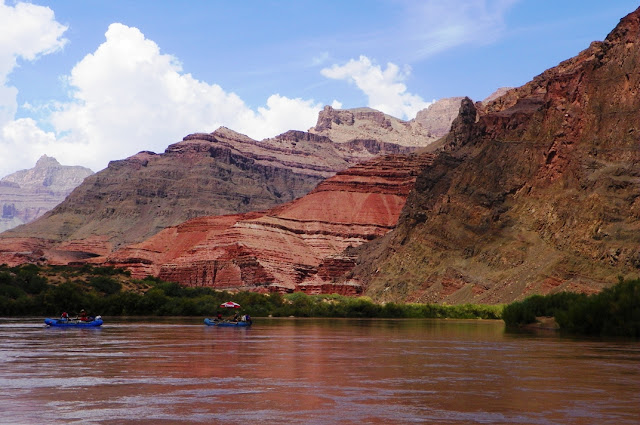 It was now day six of my journey down the Colorado River through the Grand Canyon, a trip I've been calling Into the Great Unknown, in honor of John Wesley Powell and his crew, who first navigated the river in 1869. We had floated down 65 miles from Lee's Ferry, and had now worked our way through 4,000 feet of Paleozoic sedimentary rocks that told a story of transgressing seas, tropical reefs, the growth of mountain ranges in strange places, vast sand seas, and once again a transgressing sea. It is an incredible story encompassing 300 million years, but it turns out these layers are only a small part of the whole story of Grand Canyon.

On this day we reached the hidden depths of the canyon that reveal a sequence of rocks three times as thick as the Paleozoic section. These rocks record another 550 million years of history in the time prior to the Paleozoic Era.  The rocks are known collectively as the Grand Canyon Supergroup and they range in age from 1.25 billion years to 700 million years, part of the time period we call the Proterozoic Eon. 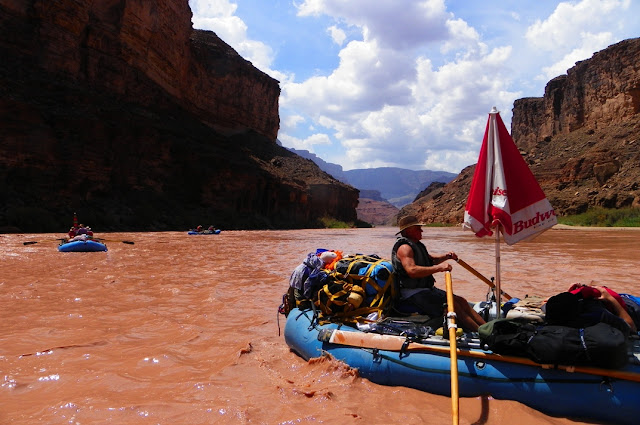 We set out from our camp at Carbon Creek and floated past exposures of the Dox Formation, which formed in river floodplains and coastal complexes. It is more than 1,000 feet thick. 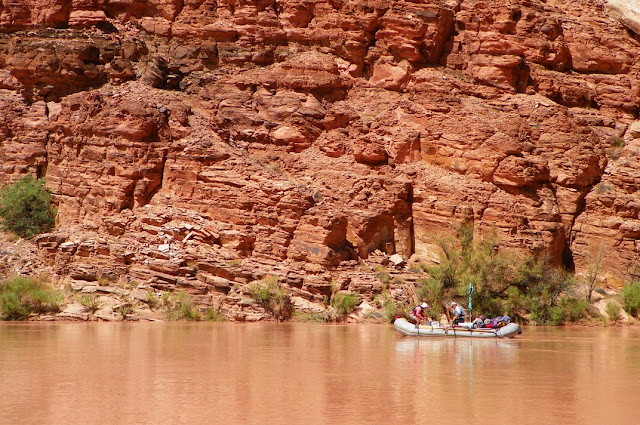 Dark cliffs appeared on both sides of the river. We had reached the lava flows and intrusions of the Cardenas Lavas which were erupted just over a billion years ago on top of the Dox Formation. 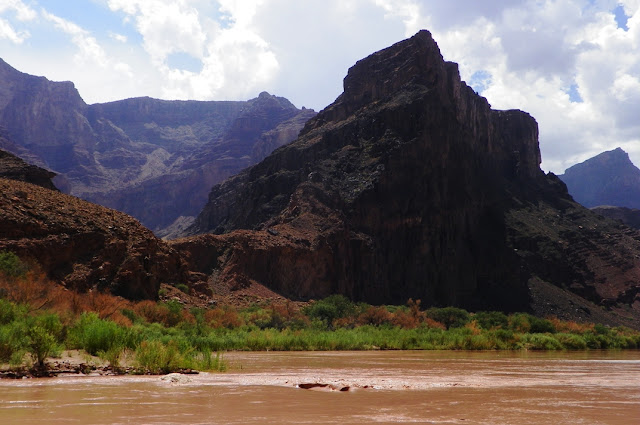 How does one fit 12,000 feet of sediments and lava flows into the bottom 1,000 feet of the Grand Canyon? The rocks are tilted! In the picture below, the Tapeats Sandstone can be seen as a horizontal layer at the top of the cliff. Beneath the Tapeats are tilted layers of black Cardenas Lavas and reddish Dox Formation. The eroded surface that forms the boundary between the two sequences is called an angular unconformity. The next question might be "how did they get tilted?". 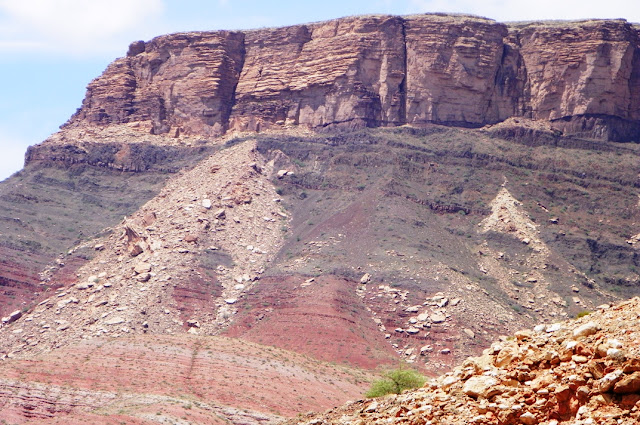 Moments later we had an answer: the rocks of the Grand Canyon Supergroup were tilted by major faults that formed when the North American continent was breaking away from Australia and Antarctica in latest Proterozoic time. We passed one of these major fault lines, the Butte Fault, near mile 66. The sedimentary layers have been dragged to a nearly vertical orientation (below). 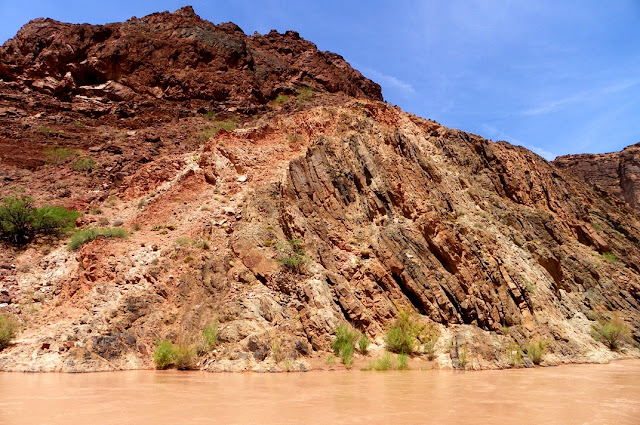 The character of the canyon was changing once again (as I've mentioned previously, there is no single Grand Canyon; it was different every day and practically every hour). For nearly a week we had been in a deep gorge with vertical walls hundreds or thousands of feet high. Now the canyon was much wider and more open.

We saw one of the truly rare evidences of human activity from our vantage point on the river. In the picture below one can barely make out the Desert View Watchtower (just left of center on the rim). The tower is three or four stories high, and yet was barely visible among the high cliffs. The tower is one of the main tourist centers on the South Rim of Grand Canyon National Park. I thought of how many times I had stood at Desert View looking down and wondering what it would be like to float down the river. This week it was finally happening, after a wait of forty years! 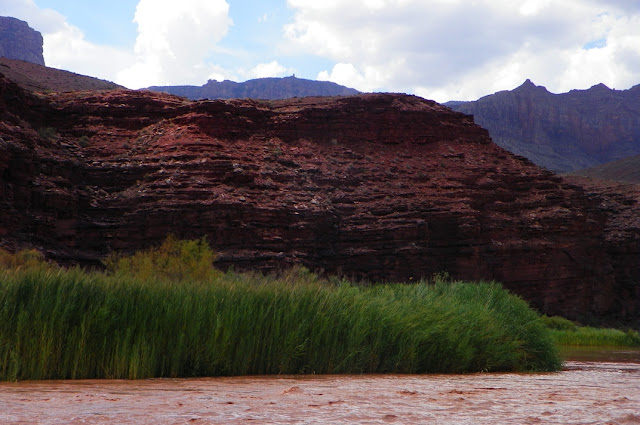 We reached Tanner Rapid and pulled over to hike up to some petroglyphs on boulders that had tumbled down the slopes of the Dox Sandstone. The openness of the canyon was refreshingly different. 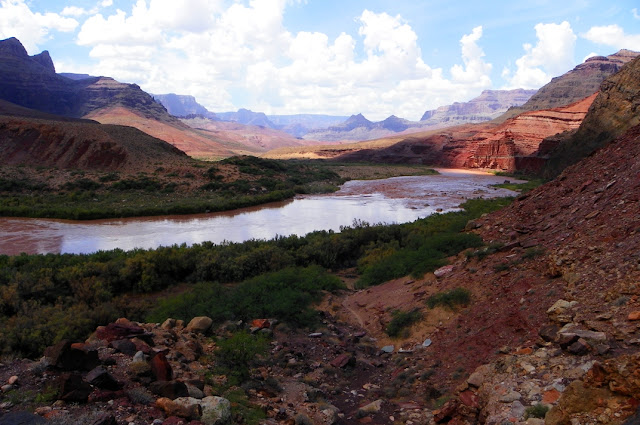 To many people, the canyon was not the "Great Unknown". It was their home. 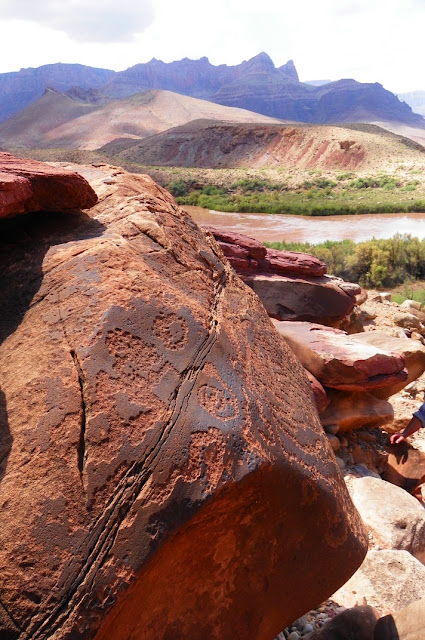 I always wonder what was being said by the individuals who chipped these messages in the rock. 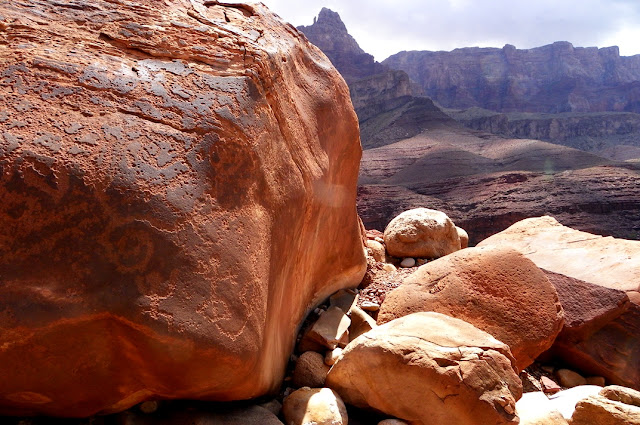 It was a hot day. I had the outdoor lead for the thermometer in the river and the indoor lead on the boat. 113 degrees! Yikes. We decided against a hike at lunch near Tanner for lack of shade. We went a bit farther down the river where we needed to scout Unkar Rapid. 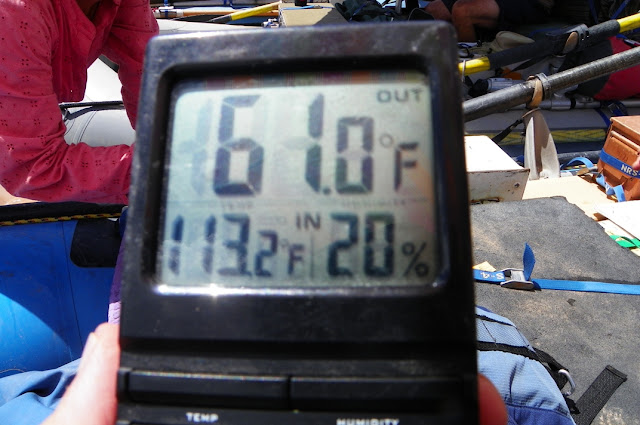 The Unkar Delta was one of the largest settled areas along the Colorado River in Grand Canyon. The sites were occupied between 850 and 1200 AD, some 350 years! They were partly excavated in the late 1960s, and the park service has constructed a trail that visits many of the sites. 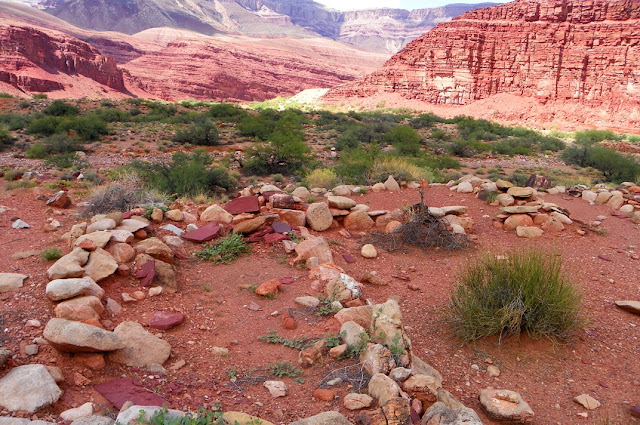 Despite the heat, I hiked the whole loop. It was hard to think of this barren area as a possible "home", but it was probable that the inhabitants moved higher up in the canyon in the hottest times of year (and conversely this would be far more comfortable a home in winter). 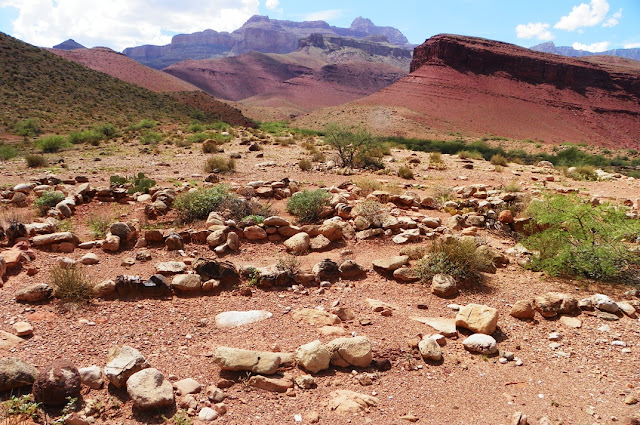 Meanwhile, the oarsmen were scouting Unkar Rapids (6 on a scale of 10). It looked rather ferocious, but these rafters know their craft, and the run was splashy and fun. 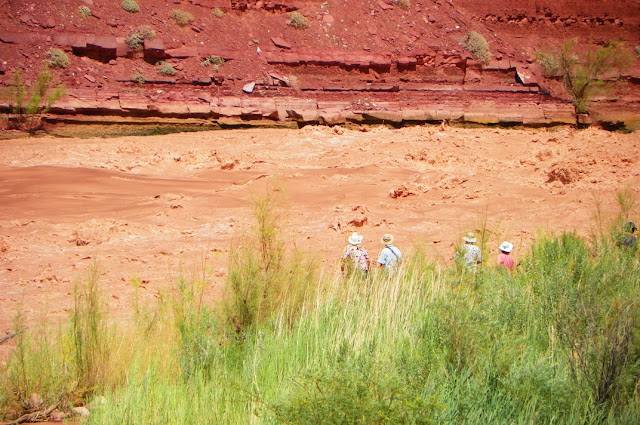 Ron in the other raft was pointing towards the North Rim. I looked up and saw for just a moment the arch of Angel's Window, a popular viewpoint on the Walhalla Plateau. 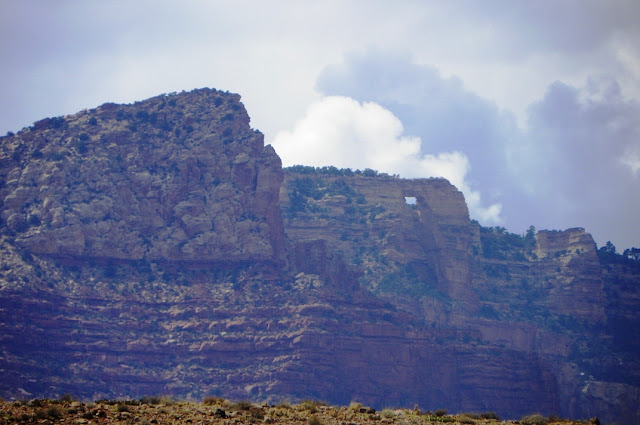 I've stood near Angel's Window many times, looking at the Colorado River framed in the arch (the picture below is from a trip in 2012). Look at the size of the people on the arch and consider how small they are from a river point of view! When Coronado's troops saw the Grand Canyon for the first time in 1540, they thought the river was only six feet across. They were only off by 200-300 feet! The Grand Canyon can have a huge effect on one's sense of scale. 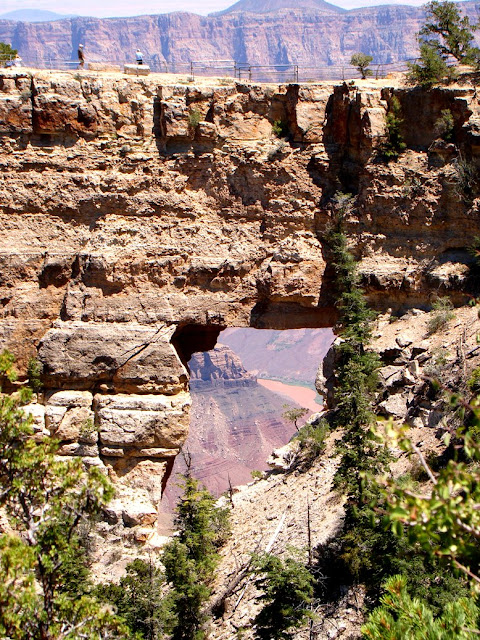 We pulled into our camp at Upper Nevills. The river was wide and calm at the campsite, and there were nice rock ledges that made cleaning and laundry convenient. I also for the first time decided to actually test my personal flotation device and did a dunk in the river. At 52-53 degrees, the river was COLD! I commented in my journal that I was glad I hadn't been involuntarily dunked in the river yet (literary note: this sentence is an example of foreshadowing...). 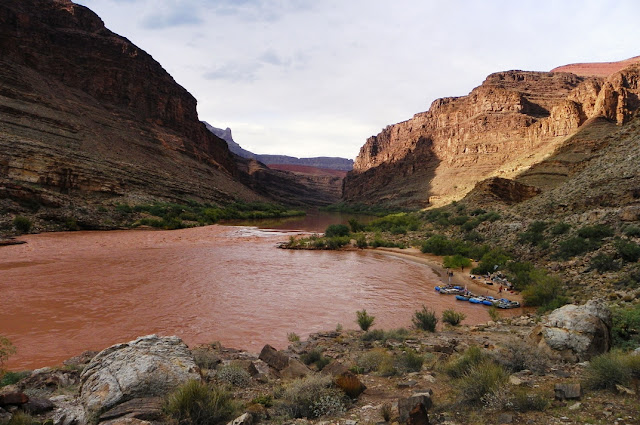 Tomorrow was a big day. We were facing some of the monster rapids, including Hance (8), Sockdolager (7), and Grapevine (7). I hit the sack.
Posted by Garry Hayes at 3:02 PM

Doesn't it boggle one's mind to see such ancient rock formations!! And I'm surprised by the very red muddy river - I had assumed it cleared somewhat ... Thanks for sharing this journey, Garry. The photos and explanations/descriptions are fantastic.