Into the Great Unknown: Living in a Thomas Moran Painting, and Through a Canyon Storm

There are, of course, many Grand Canyons. The one you will see depends on the time of day, the location of the sun and clouds, the presence or absence of storms, and your location, whether deep in the canyon, or somewhere on the rim. It also depends on the rocks you are passing through. I saw a different canyon every day, and almost every hour. It was never boring, not once. Pete, whose raft I traveled in, would probably agree that I spent every moment on the river gazing up at the canyon walls (or transfixed in horror at the lip of big rapids!). 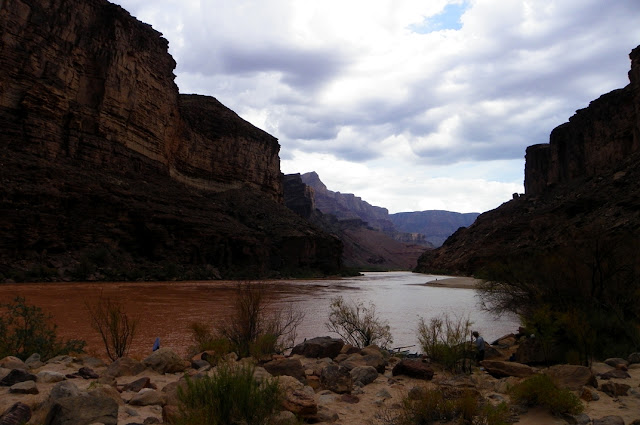 Our fifth day ended at Carbon Creek under gathering clouds. We hadn't experienced any rain since the first day, but storms had always been lurking in the distance. We set up camp and I decided to explore a little bit. I grabbed the camera and a canteen and headed up the gorge behind the camp. The personality of the canyon had changed into one of brooding and gloom. It was partly the clouds, but it was the rocks too. We had reached the Dox Formation, part of the Grand Canyon Supergroup, the billion year old rocks that lay exposed beneath the Tapeats Sandstone. 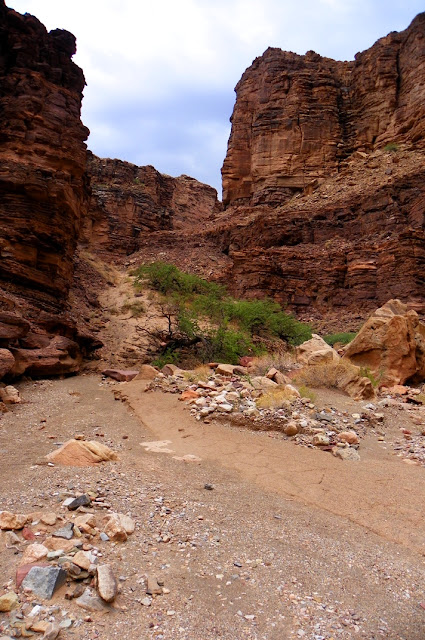 The Dox is composed of layers of silt, shale and sandstone deposited in a variety of environments, including river floodplains, coast complexes, and deltas. In some places the formation is brightly colored, but here in Carbon Creek on this day, brown and gray seemed to predominate. 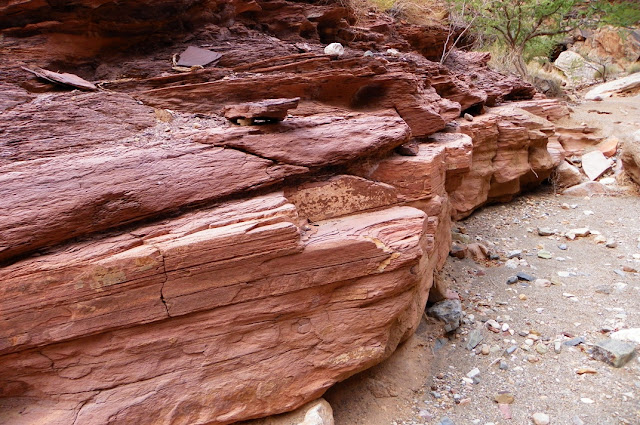 I had hoped to go far enough up the canyon to see the Great Unconformity between the Dox and the overlying Tapeats Sandstone, but I found the way to be choked with gigantic boulders that had rolled down the adjacent slopes. 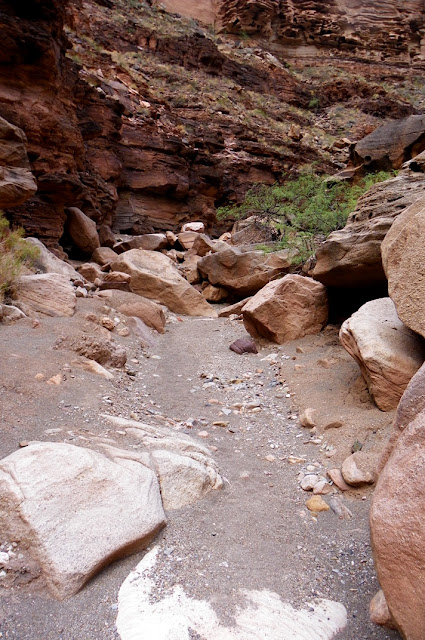 Some of them displayed cavernous weathering, with deep pits and hollows that brought to mind certain horror movies... 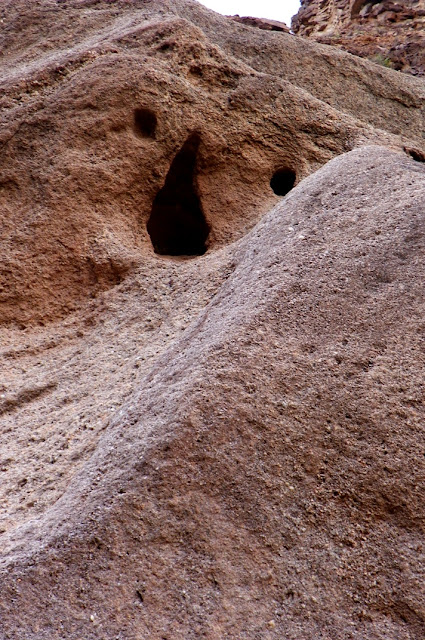 One boulder of Tapeats Sandstone really stood out...it was 15 or 20 feet tall. 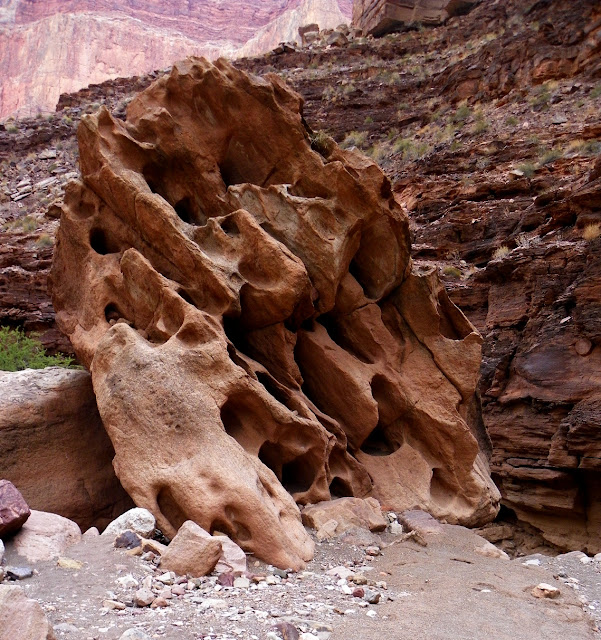 People have hiked some distance up the canyon, and have added slabs of rock to produce a makeshift stairway up the layered shale. I worked my way upward. 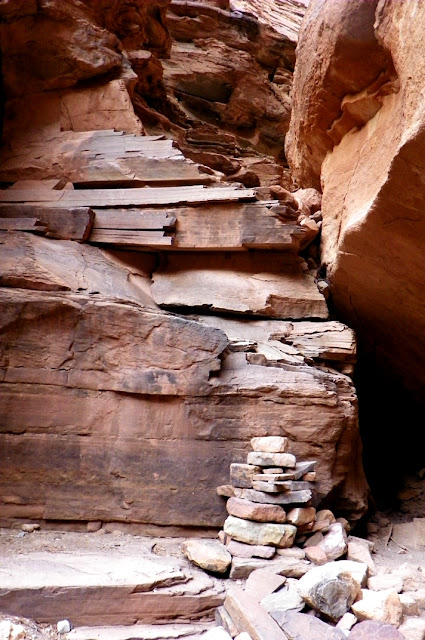 I would have explored farther up the canyon, but a sudden flash of light and peal of thunder told me that the storm had arrived. I had no rain gear, but I was not overly concerned since I was no more than 200-300 yards from camp. The giant boulders that impeded my progress up the canyon now provided handy shelter from the storm.

The rain came, not in torrents like the first day of our trip, but certainly enough to get wet. I gave some thought to the possibility of a flash flood, and from where I hunkered down, I made sure I had a direct line of escape onto the slopes above. 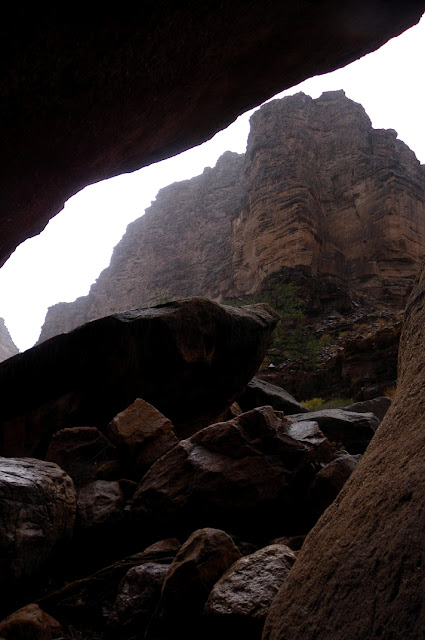 The thunder crashed and echoed through the canyons. I didn't worry; I had no place I needed to be, so I settled in and enjoyed the experience of a desert rainstorm for the next hour or so. It was even exhilarating, as I recalled the writings of John Muir when he climbed to the top of a pine tree to better observe a wild thunderstorm (I guess we're lucky he survived the experience!). 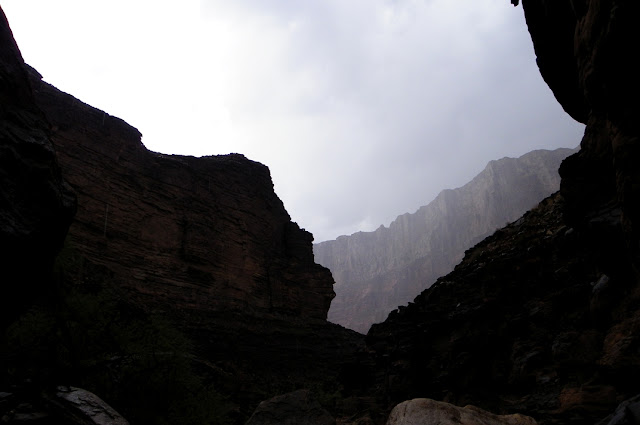 I had the sense that I wasn't alone. I looked around and realized that two of us were enjoying this storm. The lizard was enjoying it in a different way. He/she was luxuriating in the moisture, just laying there getting wet from head to toe. You can see a little droplet hanging off its tail. 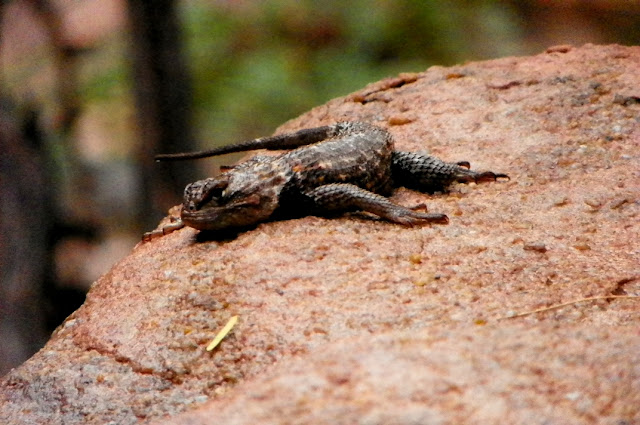 Thomas Moran (1837-1926) was a painter who did much to bring about the existence of our national park system. His dreamlike images of Yellowstone and Grand Canyon popularized both regions, especially two gigantic paintings of the parks that hang in the halls of the Smithsonian. I've always enjoyed his work, even as I recognized the somewhat romanticized views of the scenes that he set on canvas. Such vistas couldn't exist in the real world, of course. 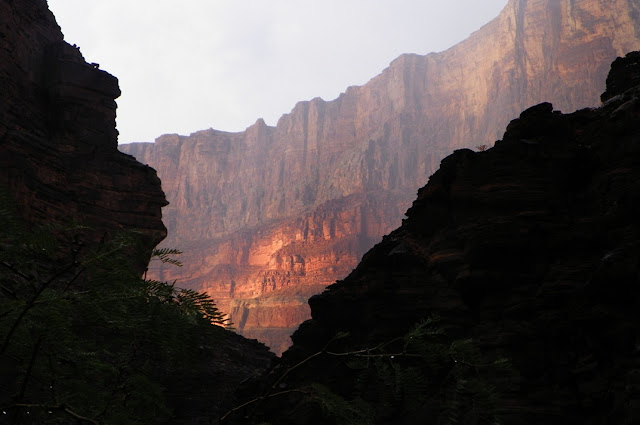 Except that they do. As the storm briefly cleared I realized I was living in a world that had previously existed only in the imagination of the long deceased painter. The clouds opened up holes that briefly let sunlight flash across the cliffs, and in other moments there was only the indirect glow of sunlight reflected off the clouds. 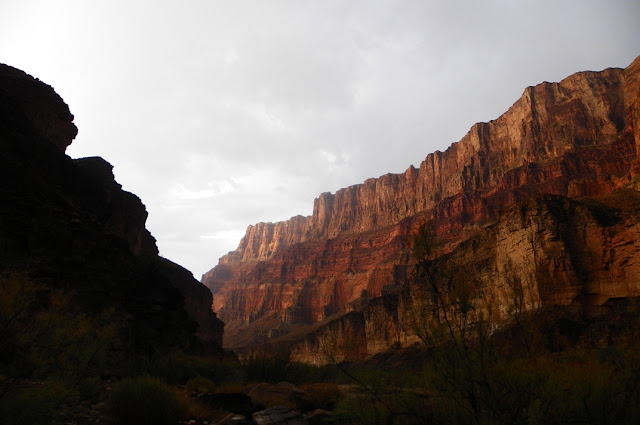 I took advantage of the lull in the storm and wandered back to camp. 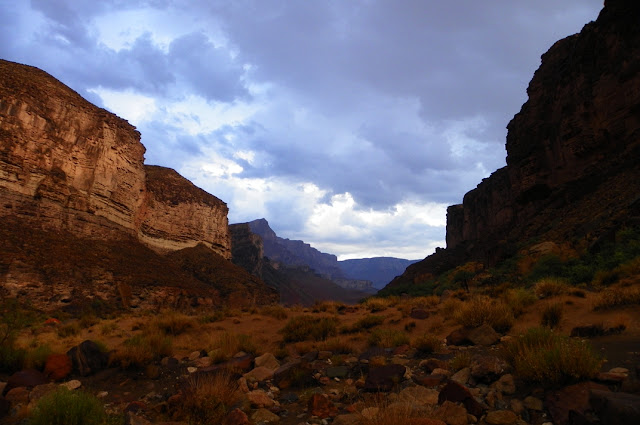 As we ate our dinner the storm returned, and the cliffs across the canyon changed color by the moment, and appeared and disappeared as the squalls moved across our line of sight. The storms continued until the setting sun removed the energy in the air masses, and a few stars began to twinkle in the sky above us. For only the third time in the entire trip I set up my tent, but no more rain fell that night. 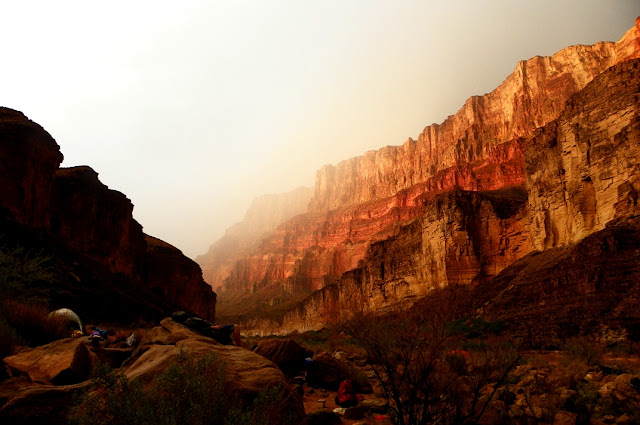 Looking at the picture below, the joker in me wants to say "this campsite was just plain rocky", but in reality we were simply drying off the base of the tent prior to packing it up for the day. 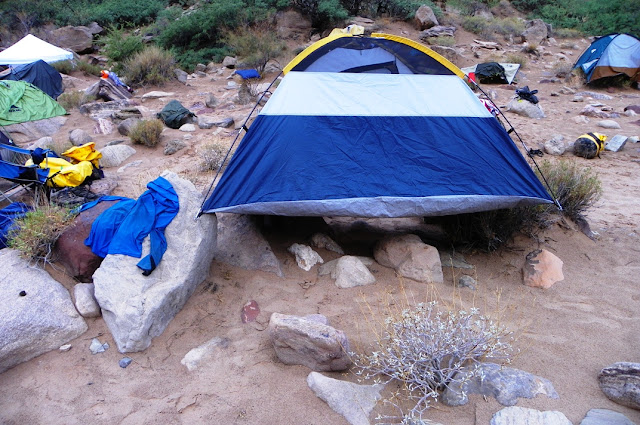 A stream had indeed flowed through Carbon Creek in the night, but it was no flashflood. The water did carve a small channel in the sand near the confluence with the river. 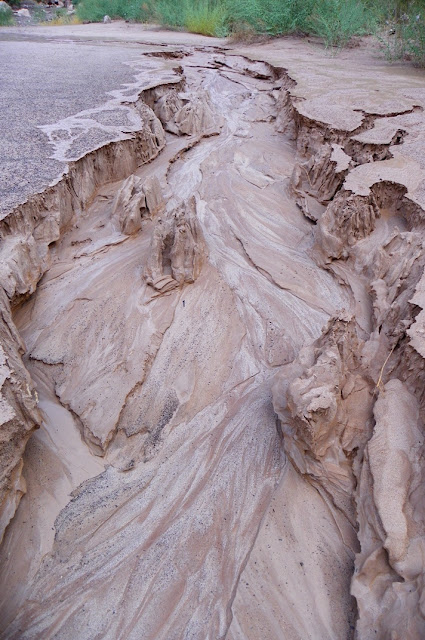 In the morning we saw the one and only scorpion of the trip. I was astounded at the small size. I've seen many of them in my travels, but never one that was barely bigger than a red ant. It was nice of the ant to wander by and provide scale for the picture. They say the smaller ones pack the biggest wallop, but according to the records no one has died in Grand Canyon from getting stung. I wasn't in any mood to experience such a thing, so we let the little guy scurry off under a rock. I shook my shoes every morning after that! 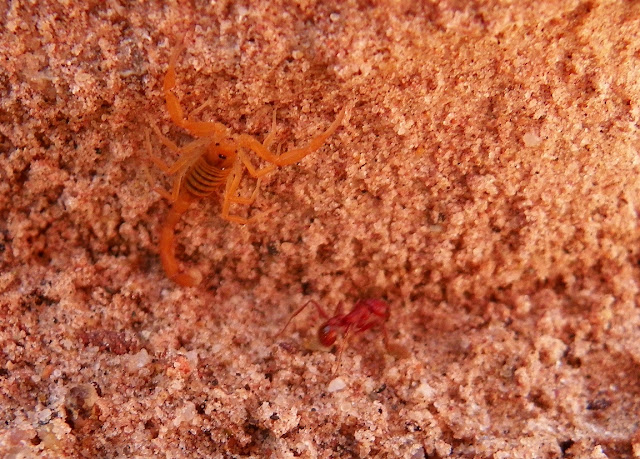 This day's experience in the canyon feels spiritual.

It's epic in length but worth every minute of viewing. Some of your pictures remind me of the iconic shots seen in that doc.

Ken Burns did a great job on the national park documentary. I have the book too!

I don't remember reading this post. I'm getting older, obviously. Re-reading is a joy. Beautiful pics.