Into the Great Unknown: Catching an Iconic Scene in the Grand Canyon, and a Bi-colored River 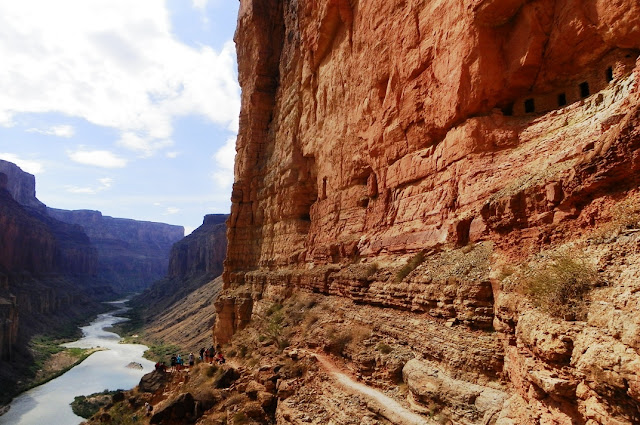 It was a busy summer. I'd like to say that I prepared extensively for my journey into the Great Unknown by getting to know the Colorado River by reading book after book, but I spent so much time organizing and conducting two other major southwest trips that when the dust settled, I only had a week to pack and read up on the river. Mostly I packed.

So it was that for the most part, the names of the rapids and the many side canyons in the Grand Canyon were new discoveries. But I knew a few of the places from reading I had done over the last forty years and I was anxious to see and photograph them. Two books that I reread this week included Down the Colorado, the Sierra Club pictorial including the words of John Wesley Powell and photos by Eliot Porter, and The Hidden Canyon, A River Journey by Edward Abbey and John Blaustein.

And that brings us to the morning in Little Nankoweap Creek. We spent the morning packing and preparing for the day, which I knew would include one of the iconic spots I had waited a long time to see: the granaries of Nankoweap. 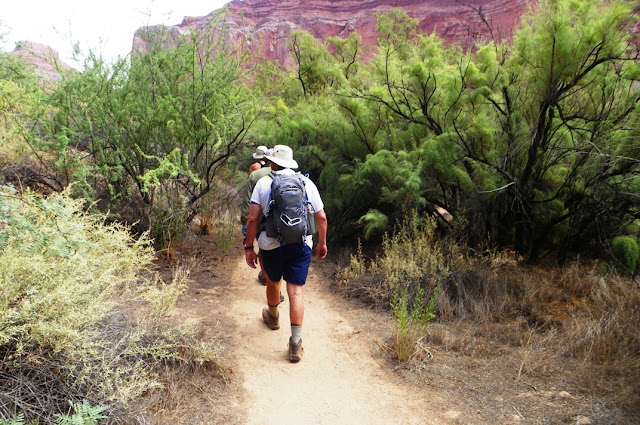 Granaries are small cliff "dwellings" that weren't really used for dwelling. They are small buildings set high in dry cliffs where food could be stored for extended periods, safe from molds, spoilage, or pests. Maize or beans could be sealed into large pots and be kept for years (a favorite exhibit of mine at Mesa Verde National Park is just such a pot and the forty pounds of 800 year-old corn). 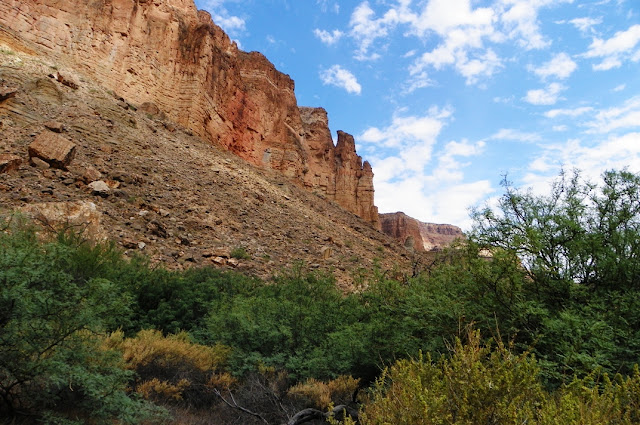 It's not that I've never seen granaries in the past. I've seen many dozens of them over the years. It's more the dramatic setting, perched in a steep cliff six hundred feet above a long straight stretch of the Colorado River.

Then again, 600 feet is 600 feet. Vertically, 600 feet is imposing, and there was no easy trail to the ruins. There was a very steep trail-of-use. It was probably no more than 1/2 or 2/3 of a mile long, but it climbed unmercifully in the hot sun. I was instantly regretting those many months of missed gym sessions on the stair-climber! 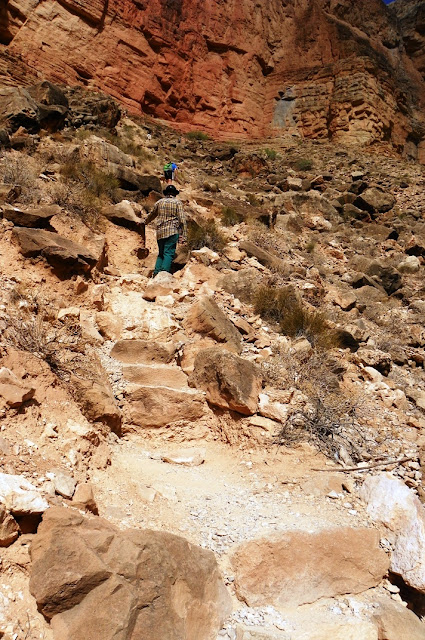 Still, I huffed and puffed my way up the trail, and I made it to the top. The view, if anything, was more stunning than I had ever imagined. 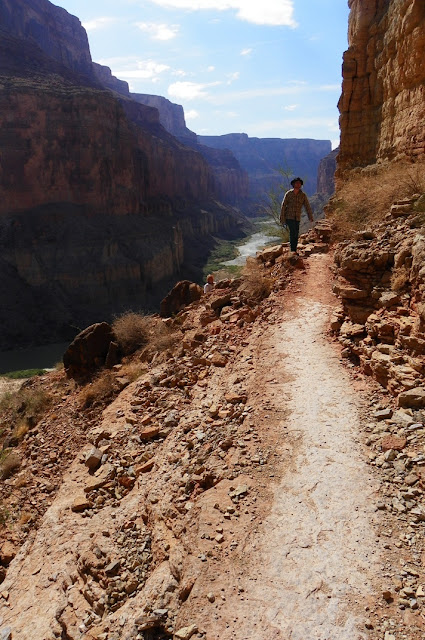 The granaries look much the same as they did in the Abbey/Blaustein book, published in 1977. River travelers seem to have a lot more class and sense of responsibility than many roadside tourists; I shiver to think how these would look today if there were a paved highway below instead of a wild river. I recalled a story I learned on the San Juan River in the 1980s. I was visiting a small village perched in an alcove along the river, and I remarked how wonderful the ancient dwellings looked. Our guide pointed out that a jeep trail reached the area of the ruin, and that pothunters had more than once winched the walls down looking for antiquities. They had been rebuilt three or four times. I was sorely disappointed in humanity at that moment (and many times since, for that matter). 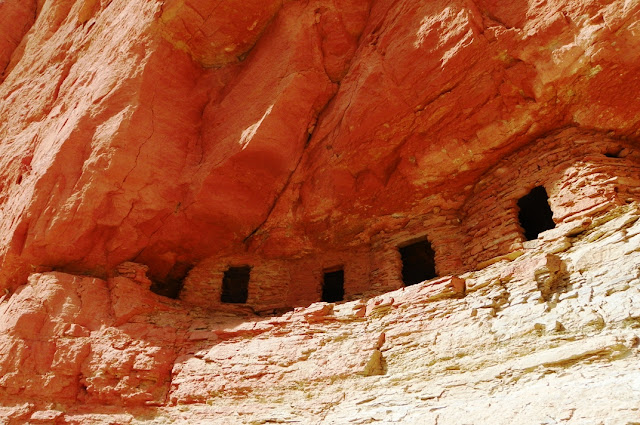 We were exploring a wilderness, but this slope and the Nankoweap delta 600 feet below us had been home to generations of people. They grew their crops, hunted, and planned for the future by constructing these rooms in the cliff. To them, this was their whole world, aside from the stories and messages carried by the occasional traveler who wandered by.

We made our way back down to the river. 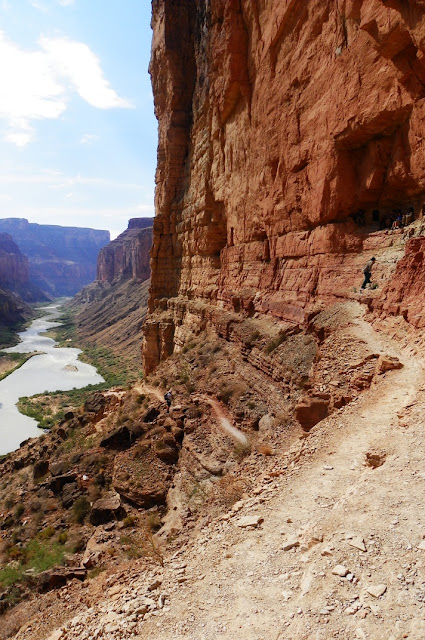 The river was revealing more of the Paleozoic history of the rocks. We had reached the Cambrian-aged Muav Limestone the previous day, and now we were seeing more and more of the underlying Bright Angel Shale. The shale is often hard to actually see, because it is so easily eroded, and tends to be covered by debris and talus that has fallen from the cliffs above. We did pass a rather striking green tower of Bright Angel Shale which had presumably been protected from erosion by harder rock above. It's called the Gray Castle. 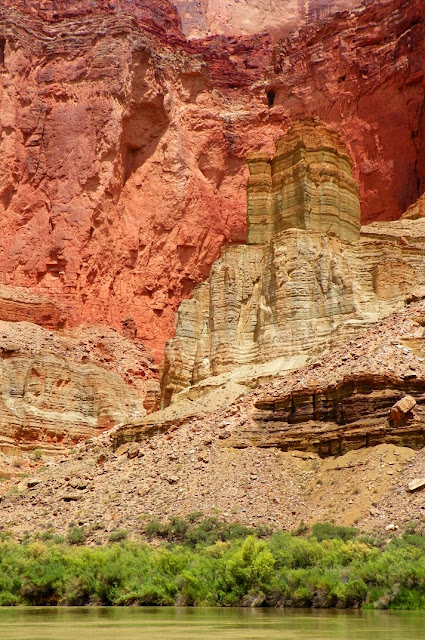 We rode down Kwagunt Rapid (5) without problems and stopped for lunch on the beach along the eddy below. We remarked that the river seemed to be clearing after days of red mud filling the channel. The oarsmen suspected that would not be the case for long because we were approaching the confluence with the Little Colorado River. 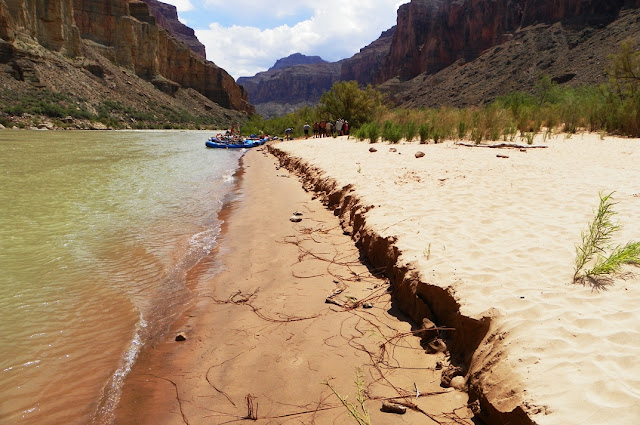 The play of clouds and sun in the afternoon made for beautiful vistas down the canyon towards the canyon of the Little Colorado River. 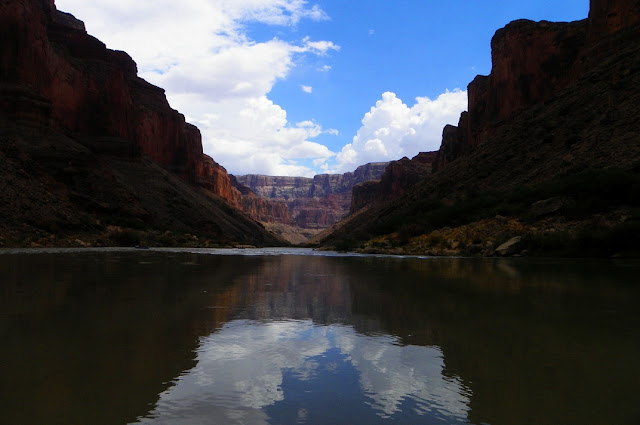 A new and distinctive layer made an appearance along the riverbanks, the brownish ledges and small cliffs of Tapeats Sandstone. The Tonto Group, composed of Tapeats, Bright Angel and Muav was now complete. The rocks tell a unique story from the time of dawn of complex life on the Earth. 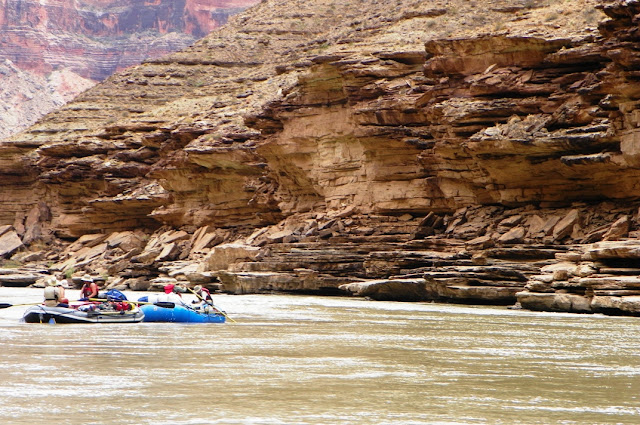 The Tonto Group was deposited during the Cambrian Period, the earliest part of the Paleozoic Era. The rocks range in age from 541 to 485 million years ago. It was during this period of time that a supercontinent that we now call Rodinia was splitting up into a series of smaller continents that would persist as separate entities until they rejoined into Pangea around 300 million years later. As continents split apart, a narrow sea will fill the space between them, and as they pull further apart, they will subside, due to lesser heat in the underlying crust. The oceans slowly invade the land.

The Tonto Group is the visible record of the splitting and subsidence of the Rodinian supercontinent. As the beach transgresses onto the land, the waves grind up terrestrial sediments into sand and gravel, and that is what became the Tapeats Sandstone. As the shoreline moved eastward, the offshore mud and silt eventually became the shale of the Bright Angel. Because the continents at that time were at tropical latitudes, the far offshore shoals and shallows produced the thick layers of Muav Limestone. The rocks are full of traces of the earliest complex and hard-shelled creatures to be found on the planet. These fossils include a variety of trilobites, brachiopods, archaeocyathids, and other generally unfamiliar life forms.

Trilobites were perhaps the most intriguing. They were arthropods, in the same phylum as today's insects, crustaceans, and arachnids (the term arthropod refers to "jointed-foot"). The resembled today's horseshoe crabs, or more familiar in my backyard, pill-bugs (but often much larger). A vast number of barely known soft-bodied forms were present as well. They left few fossils, but did produce many trails, tracks and burrows. 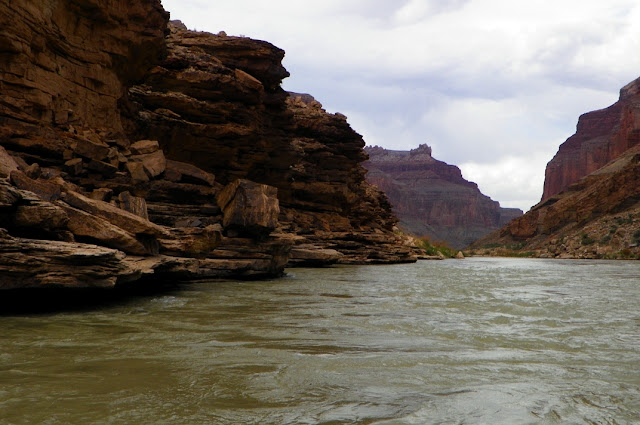 We reached the confluence of the Colorado and Little Colorado Rivers. As predicted, the Little Colorado was running red and muddy instead of the usual striking turquoise color. The water did not quickly mix, and for some distance the Colorado had a green zone and a red one. 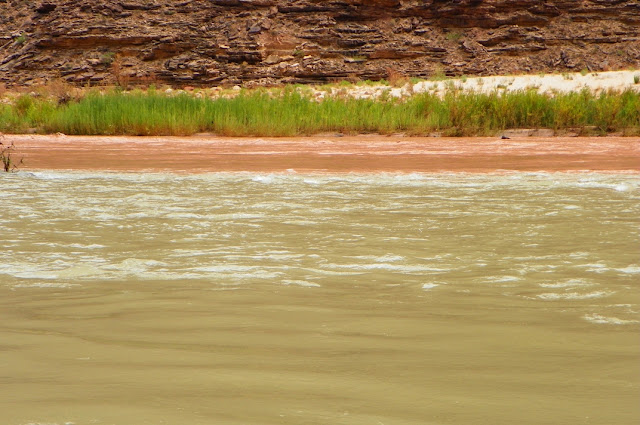 It wasn't long before the river was living up to its name, and the muddy red color stayed with us for the remainder of the trip. 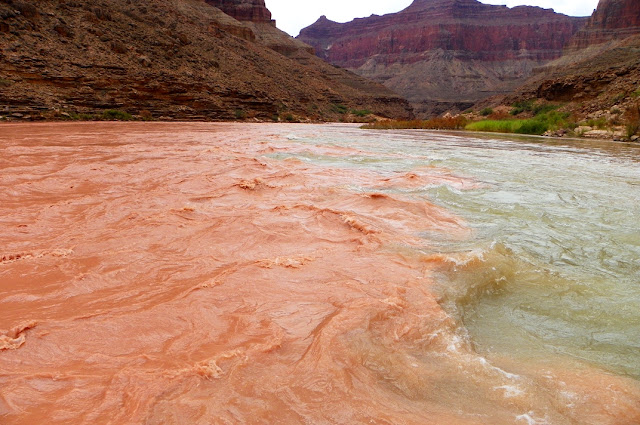 We passed one more interesting feature a short distance downstream. A white mineral was emerging out of the cliffs by the river and coating the rock. These were the salt deposits that are an important part of Hopi life. A challenging ceremony involves a long journey on foot from the Hopi mesas to the Little Colorado River where mythology and tradition states that people emerged from the third world into the fourth. Young men come downstream and collect salt, carrying it back to their villages as part of the journey into adulthood

River travelers are asked not to stop here, and we didn't. We continued down the river, pulled into camp at Carbon Creek and unloaded the boats. We had covered about twelve miles. Clouds were gathering in the sky above us... 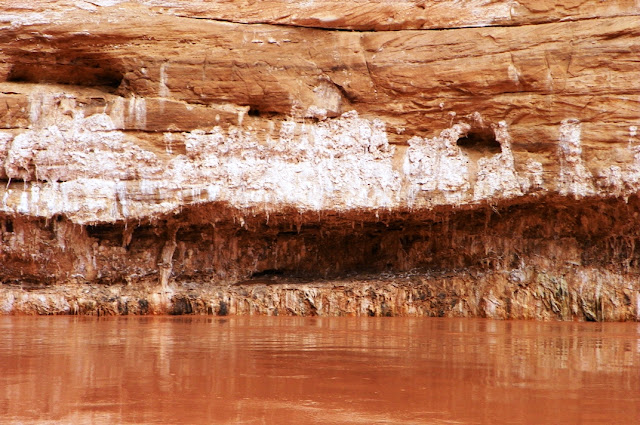 Wonderful photography and explanations, Garry. A superb trip (even with the 600 ft uphill climb in the heat!) so far, isn't it? Cheers.

I dream of seeing the Nankoweap granaries someday. They look like they were just built.