Into the Great Unknown: Exploring 300 Million-Year-Old- and 50 Year-Old Caves (and a bit of fossil hunting)

Our adventure in the Great Unknown of the Colorado River continued through Marble Canyon. We started the day with stops at Vasey's Paradise and Redwall Cavern (in the previous post) and now we were floating down a canyon with 500 foot sheer walls. Here and there, water trickled from springs in the Redwall Limestone, and at several of them seeds had found a place to root (below). 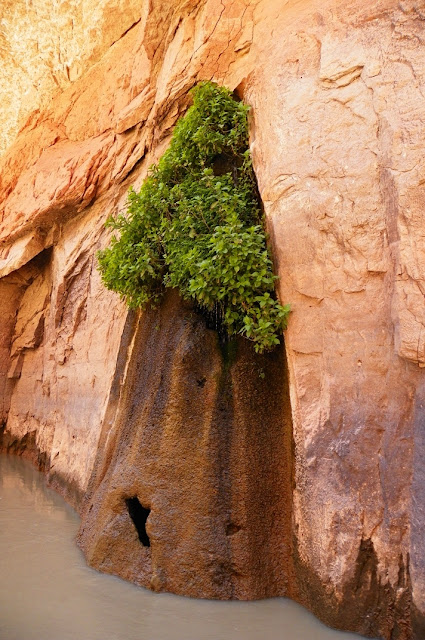 About two miles below Redwall Cavern we made a stop at another well-visited site: Nautiloid Canyon. Nautiloids were relatives of the octopods, and can be thought of as octopi with shells, some of which were coiled like a snail, or straight, like a long thin cone. Three species exist today, including the chambered nautilus, a common sight in curio shops. At times the nautiloids dominated the seas, especially during the Mesozoic Era (the "age of dinosaurs"). In Nautiloid Canyon, a number of them have been exposed by the erosion and polishing of the Redwall Limestone. 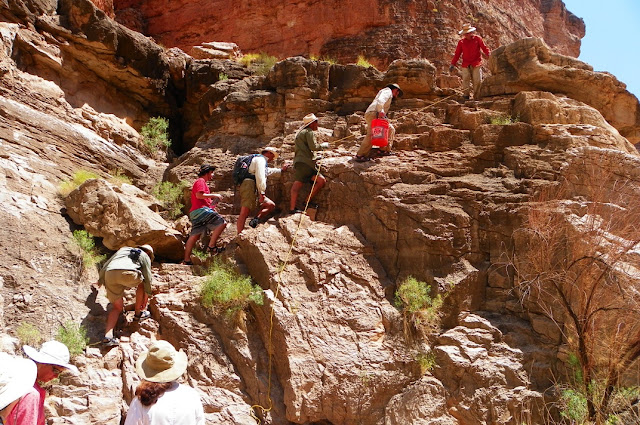 To see them, we needed to climb 75 feet up a limestone ledge and head into a slot canyon. They are easier to see when wet, so one of the party can be seen hauling a bucket up the rocks. 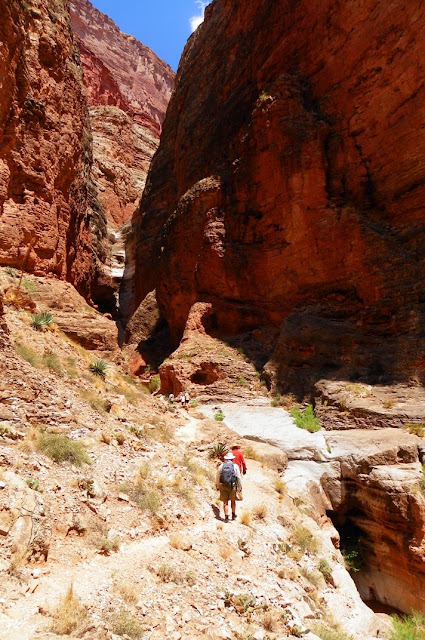 Before heading into the narrows, I stopped and took a look at the canyon below us. I wondered, here on the third day of our trip, if I would get tired of being inside these canyon walls at some point in the next thirteen days (for the record I never did!). 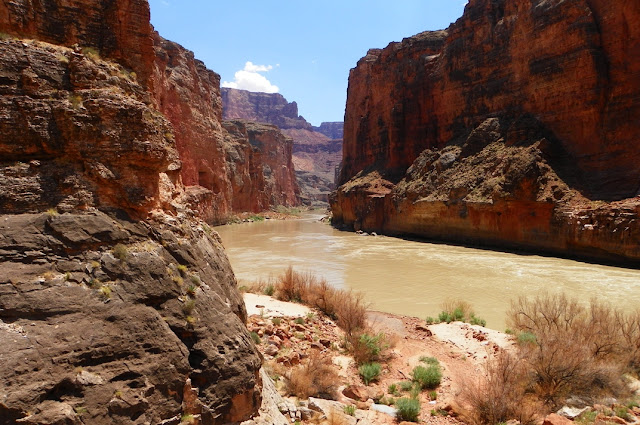 Marble Canyon is sometimes thought of as a sort of preliminary introduction to the "real" Grand Canyon. I found it to be one of the most beautiful canyons I had ever laid eyes on. 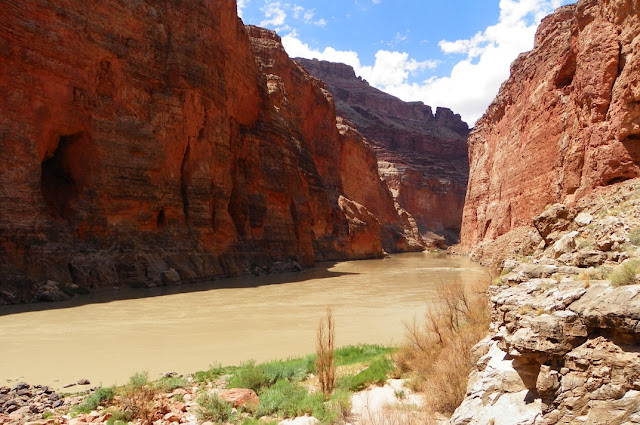 The nautiloids were quite fun to see (a two foot long shell is just left of center in the picture below), but in searching for shade, I noticed something else that I found very interesting. 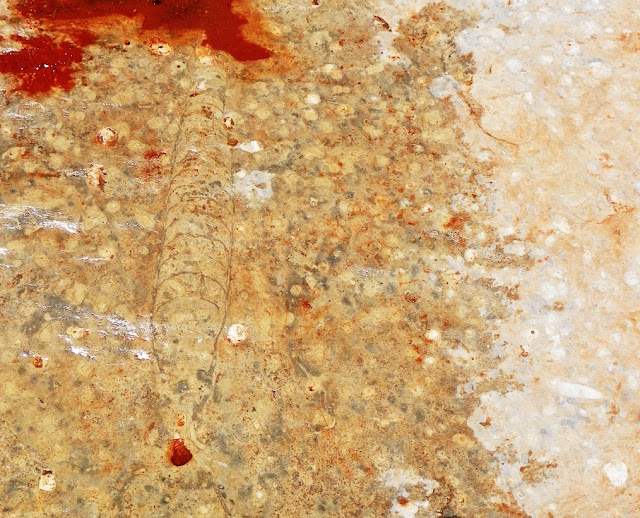 As I've mentioned before, the Redwall Limestone is riddled with caverns. Looking at the waterfaull that blocked any further progress up the canyon, I noticed there was a large cavern opening in the shade on the left. I walked up to see if it contained any of the usual cave decorations like stalactities or stalagmites (these features are collectively called speleothems). 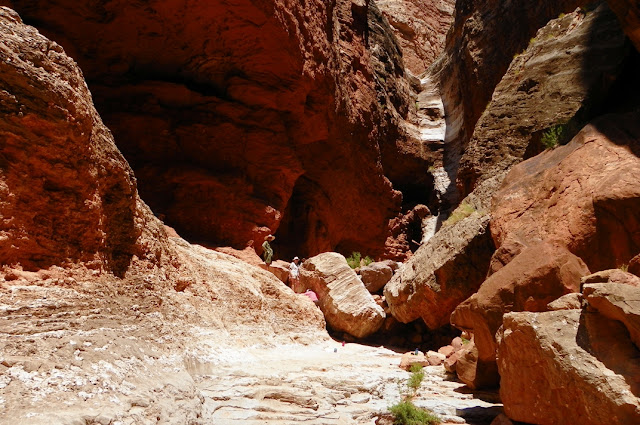 What I found in the openings above my head was a surprise: there was a lot of red dirt and debris. It wasn't much to look at, but it contained the beginnings of an answer to a question I've asked myself on occasion. Could a cavern exist for millions upon millions of years in the Earth's crust? Many of the caverns that exist in the world today are a few million years old at most, but I understood that the Redwall Limestone exhibited evidence of karst topography, the sinkholes and blind channels that develop as caves grow and collapse. The karst developed not long after the Redwall was deposited in Mississippian time.

The sinkholes and caves would fill with debris from above, some being carried by rivers and streams. A new formation was described in the 1970s, nearly a century after one would think all the formations had been discovered. Appropriately known as the Surprise Canyon Formation, it is composed of stream gravels and silt layers deposited within the karst openings of the Redwall in late Mississippian and early Pennsylvanian time. It was looking more and more like I was finally standing in the opening of a cave that existed before the age of the dinosaurs! It had been protected through the ages by the fill of dirt and gravel. 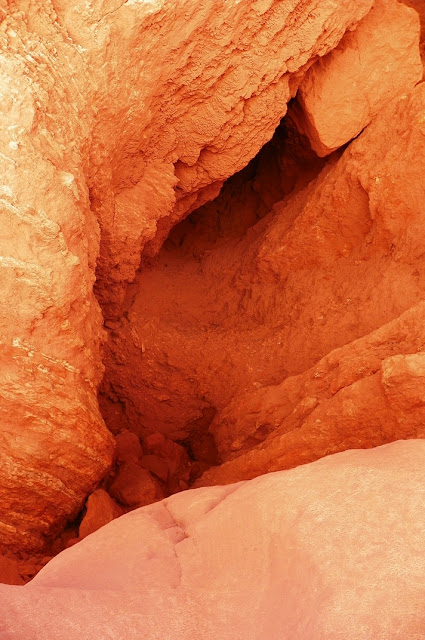 Now, about that weird looking feature in the opening photograph. We stopped for lunch at mile 35.3 and I was directed to have a look at these miniature "hoodoos" (or maybe it was the maw of tourist-eating space creature). It didn't take long to see what was happening. 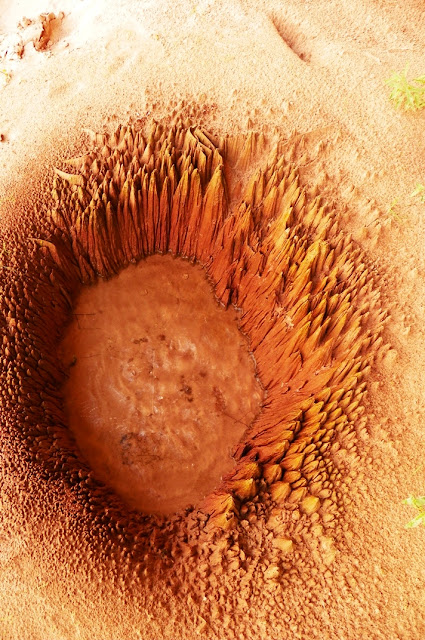 They were pools in the loose sand below springs dripping out of the ferns up above. 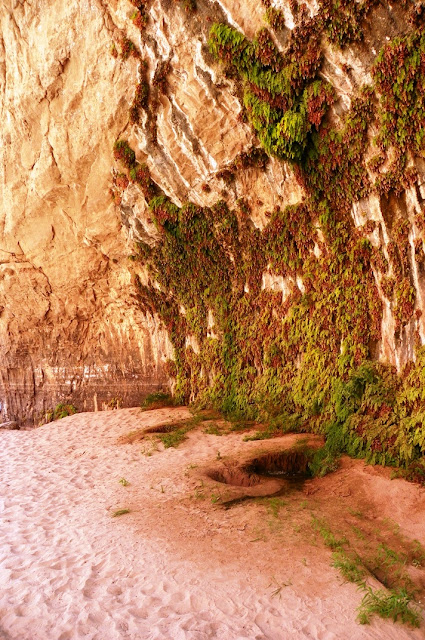 After lunch, we continued a few more miles down the canyon, drifting in the gentle current and enjoying the view of the high canyon walls. Caves were everywhere. 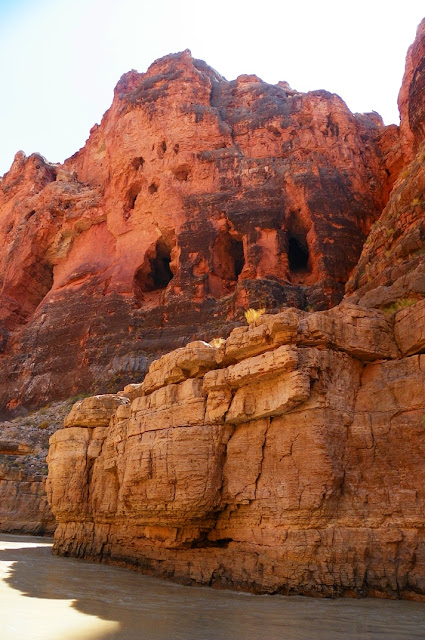 We ran the one moderate rapid, Thirtysix Mile (4), without incident... A mile or two later we stopped at one of the most ominous sights I had yet seen. In the 1950s, a dam was proposed to be built in Marble Canyon. They went so far as to drill exploratory tunnels to test the soundness of the limestone. I was appalled that anyone thought to dam this river, and as a geologist I really wondered at the sanity of trying to plug all the holes in the cavern-riddled Redwall Limestone. The reservoir would probably have leaked like a bathtub with dozens of drains.

We stopped and explored the tunnels. I didn't take a camera, but I was surprised at the length (and complexity) of the tunnels. In the greatest depths there were hundreds of stalactites growing from the cave ceiling. New flowstone was draped on the tunnel walls like white icing on the side of a cake. The new speleothems were pearly white, and the stalactities were about an inch long. I was witnessing the formation of a brand new cavern after exploring another that has existed for geological eras. It was a strange juxtaposition, and the tunnels a jarring contrast to the magic of the river. What insanity would allow a dam to be built here? 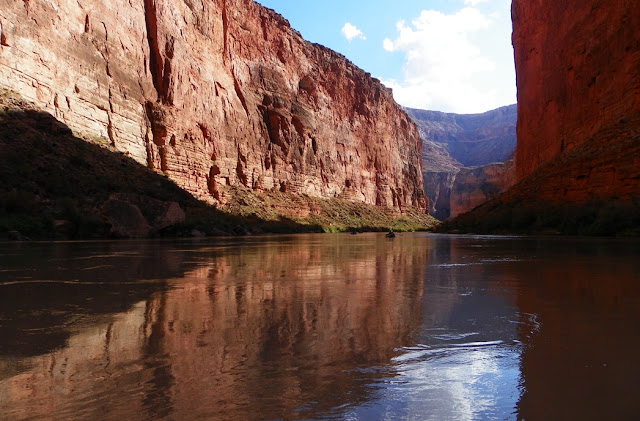 The last few miles to camp remain in my mind as some of the most pleasant moments of the entire journey. We floated down a calm river, and after a bit, Pete stopped rowing and leaned back. We drifted with the current, and after the brief sound of water dripping from the oars, it was silent. Shadows had fallen across the river and the high cliffs were reflected off the surface of the water. 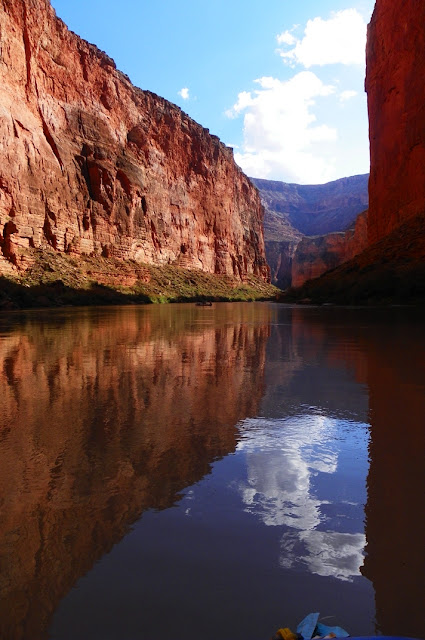 It was one of the most beautiful moments I could imagine.
Posted by Garry Hayes at 11:10 PM

Those mini hoodoos are fantastic. I am so jealous, yet so excited seeing this upper part of the river.