A Convergence of Wonders, Day 13: Hidden Treasures and Hazards on the Road in Western Wyoming

June 27, Day 13 of our trip through a Convergence of Wonders in the Pacific Northwest and Northern Rocky Mountains, dawned bright and clear as we set out on the long road home, still three more days away. The day began with an absolutely stunning view of the crest of the Grand Tetons, which just begged for a panorama shot on my wife's camera (click on the photo above for the full effect). These peaks are composed of exceedingly ancient metamorphic rocks of the deep crust that have been lifted miles into the sky. The valley floor on which we stood contained thousands of feet of sediment washed from the mountains. The faults responsible for these incredible mountains are undoubtedly still active, which brings us to the theme of the day, if there is any such thing, the idea of geologic hazards. Another thing I sort of realized on reflection was the hidden nature of some of the geology we would be seeing today. We were leaving the really famous national parks behind, and exploring some lesser known parts of the American West. 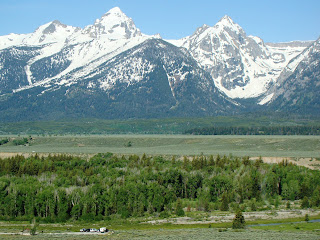 We would be driving from Grand Tetons to the town of Vernal in northern Utah. Before leaving the park, we took a brief look at the river terraces along the Snake, and the glacial moraines forming the irregular ridge beyond. The Ice Age glaciers didn't reach this part of the valley floor, but the glacial meltwater certainly had. During the glacial periods, the rivers ran muddy and filled in the valley floor with sand, silt and clay. During the warmer interglacial periods, the rivers ran clear and fast, and eroded into the older deposits, forming the flat terraces. The multiple terraces are evidence of multiple glaciations. 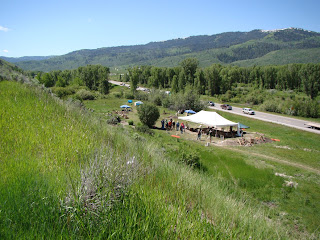 Hidden treasures? We had heard that an archaeological dig was going on adjacent to the highway near Hoback. We paid a visit and were graciously given a tour of the Game Creek Archaeological Dig. A highway widening project had uncovered artifacts, and a multi-year excavation revealed a stratified site that encompassed some 10,000 years of human occupation at this location. 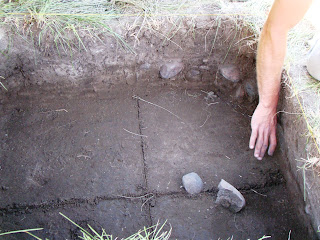 The pits were carefully measured, excavated and recorded. This is why I never would have made it as an archaeologist (or a paleontologist, for that matter). I'm too hooked on the moment of discovery, and have not the patience to do the hard work that leads to discovery. 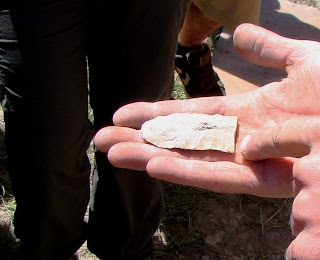 Discoveries happen, though, and we had a close look at a spear point that had been found in the bottom of one of the deepest excavations. 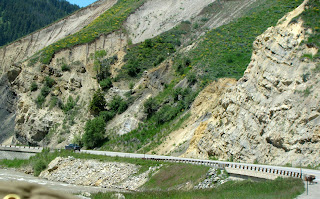 Geologic Hazards? Besides the obvious threat of earthquakes in Jackson Hole and Grand Tetons, we noticed that keeping the road clear in this very wet year was a challenge as well. The weakly consolidated siltstones and mudstones were failing in many places, producing slumps and slides that had damaged the highway in the weeks before our arrival. 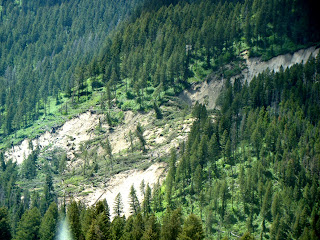 Passing through Star Valley, we noticed more evidence of active faulting in the form of triangular facets. As the mountains rise and the valley sink along fault lines, erosion shapes the fault scarps into triangle-shaped slopes. 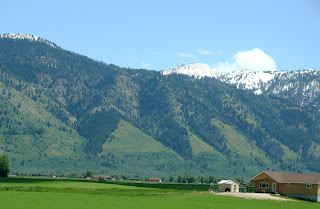 As if to put an exclamation point on the whole theme of hazards, the Bear River was flooding the valley floor near Cokeville... The landscape was changing rapidly as we drove south and east. The forests, high mountains, and sharp jagged peaks had been replaced by barren slopes of siltstone and mudstone. We were driving through exposures of the early Cenozoic Green River Formation, which was deposited in vast freshwater lakes that covered much of Colorado, Wyoming and Utah. The sediments are thousands of feet thick and contain huge amounts of hydrocarbons in various forms. One of the more astounding treasures hidden in the rocks are fossils of the creatures that lived in and around the lakes. Millions of them have been found, and include species of fish, rays, crocodiles, insects, amphibians, birds and mammals. Several of the most productive fossil quarries have been preserved as Fossil Butte National Monument. We made a brief stop to look around. 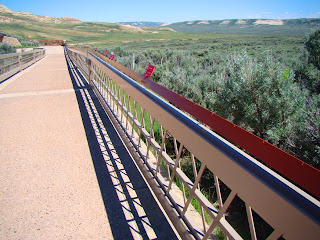 The park had a nice new addition to their exhibits: a time line that extended for more than a mile (I think) illustrating significant moments in the geologic history of the planet. On the time line, the entire history of human culture barely registered at the very end, essentially the thickness of the paint on the end of the railing. They have a well-done display of many of the fossil species inside the visitor center (no collecting in the park of course; one can pay to dig fossils at several places nearby outside the park boundaries). The strange creature below is a stingray. 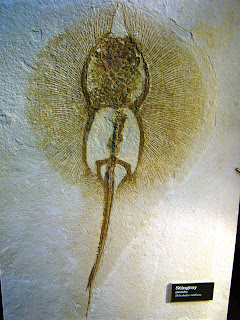 We still had quite a few miles to go. We would like to have spent more time along the spectacular cliffs of Flaming Gorge, where an entire section of sediments spanning Proterozoic, Paleozoic and Mesozoic time can be investigated. 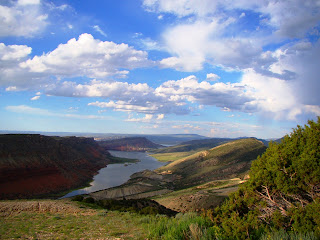 We crossed the crest of the High Uintas, driving over a 25,000 foot thick section of sandstones and conglomerates that were laid down around a billion years ago in a fault trough. On the south side of the mountains, we passed through the Paleozoic and Mesozoic rocks again, and in the last shadows of sunset, we arrived at our campsite in Vernal, Utah. It was a long travel day, but we were now situated for an early start on one of our great adventures of the trip, Nine-Mile Canyon. It's not nine miles long, and none of us had ever been there before... 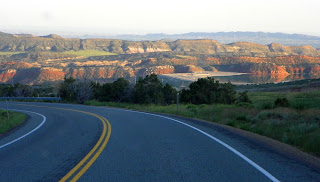 Look for the story in our next post!
Posted by Garry Hayes at 1:35 AM

You saw a lot for a day of road trip.

Glad there was some arche stops. Looks like these sites are in the deposited river beds. Very cool! Although I'm facsinated by archeology I have to agree about the slowness of discovery. Same is true for fossils, which I love to find.

These trips are never long enough yet you've seen so much.

I haven't commented on this series before, but I truly love it! Thanks for sharing your trip and your spectacular pictures with us.