A Mystery Photo for a Tuesday (and a bonus mystery photo) 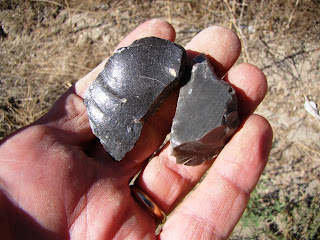 Hi all! I've been away, and out of contact with the world for a few days. Is anything going on geologically? OK, yes, I did actually hear about the quake in Virginia, but not until many hours later...

Anyway, I was doing some field trip research in Southern California. Even though I grew up down that way, and worked at Santa Barbara City College for four years, I saw a lot of new and very interesting territory. Expect to see some new "Other California" posts over the next few weeks.

In the meantime, here is a mystery rock for you to identify. I can't give you too many clues, other than to say to trust your intuition, and realize that the answer will only be sort of half right 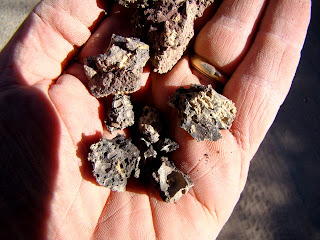 And here is a second handful of mystery samples to identify, from the same outcrop.

So, what are these rocks, and how did they form?
Posted by Garry Hayes at 7:59 PM

Labels: Mystery photo, The Other California

Since my intuition says Obsidian, and the lower one looks kind of tuffaceous, I'm going to posit that the above is either devitrified obsidian, or secondarily deposited silica. The lower ones look pretty heavily altered, too

Looks like the obsidian and tuffa I've seen from the Salton Sea area.

I'm a total non-geologist, but agree with the above that these look volcanic, 1st looks obsidian-like, 2nd looks pumice-like, both cooled very quickly. And that, dear people, is about the end of my geologic-database. I WILL be back to check out the answers! =)

Glassy luster on 1st definitely looks like obsidian. 2nd looks like vesicular basalt- not quite bubbly enough to call it scoria- plus some secondary minerals, maybe tufa, or just some dirty calcite from weathering.

Well of course the top one is obsidian and the second is also volcanic but not being a geologist I lump such things together as pumice or tuff. These are found together in the obsidian dome and craters in the Eastern Sierra near my summer home.