Vagabonding across the 39th Parallel: Having a "Swell" Time on the Reef! 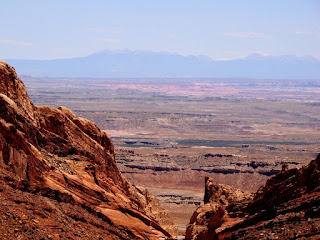 If you thought I was talking about sipping pina coladas on a beach in the Caribbean, well, think about nearly polar opposites. Hot, yes, but not tropical. We were in a very dry and remote place in central Utah. This is a continuation of our July journey through the American West, vagabonding across the 39th parallel. The swell is a huge domal uplift, and the reef is a long monocline. If there is one thing to say about driving along the 39th parallel, it is that the landscape never stays the same for very long. 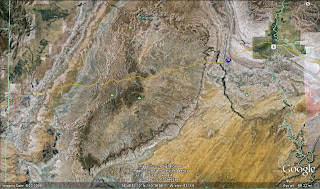 Having crossed the transitional zone of the Wasatch Mountains, we had left behind the Basin and Range Province, and were now on the relatively stable crust of the Colorado Plateau. The plateau, as the name suggests, is mostly made of high flat mesas and buttes of horizontal sedimentary layers representing some 500 million years of earth history (with much older stuff buried beneath). Although mostly flat, the plateau region has been faulted here and there, and in places has been warped into a series of basins and broad domes. The San Rafael Swell is one such dome, and it is huge, 130 miles long and 70 miles across. From space, it is one of the most obvious structures in all of Utah (above). 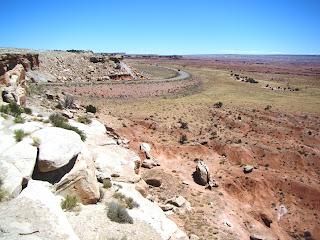 A dome in this case refers to the shape of the sediments. They've been pushed up like a blister, but erosion has sheared off the upper layers, exposing the older layers underneath. As we left Salina, heading east on Interstate 70, the signs noted that there would be no services for the next 100 miles. That is the kind of sign that makes you look at the temperature and gas gauges... 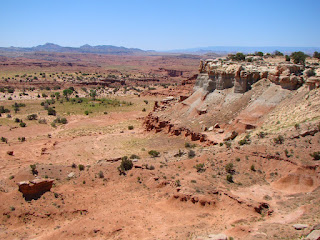 At least the road was not as lonely as some of the others that we had been traveling. And because of the beautiful scenery, there are a number of turnouts with nice photo opportunities. The rocks are striking. They represent the entire Mesozoic Era (the age of the dinosaurs, basically), which lasted from 245 to 65 million years ago. Upper Paleozoic rocks are exposed in the core, while early Cenozoic rocks are found around the margins of the dome. All in all, some 8,000 feet of sedimentary layers can be seen while crossing the San Rafael Swell (the Grand Canyon has only 4,000 of Paleozoic layers, in comparison). 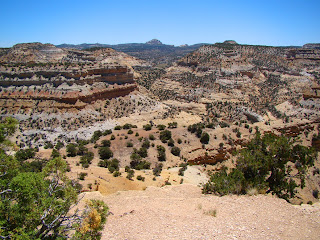 At the top of the post, I said we weren't on a tropical beach. That's not entirely true, it's just that the timing is off a little bit. Some of the oldest rocks exposed on the Swell were deposited on a tropical beach, and we had arrived just 300 million years too late to listen to the crashing waves. 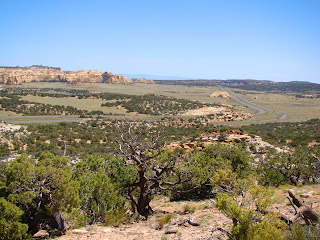 The road passes through an hour of horizontal Permian and Triassic rocks, but at the eastern end of the Swell, the landscape goes crooked. The margin is marked by a massive monocline, an odd fold that has flat layers on one side, a flex in the middle and flat layers at a lower level. The effect is something like a stack of rugs draped over a step. We had reached the San Rafael Reef. 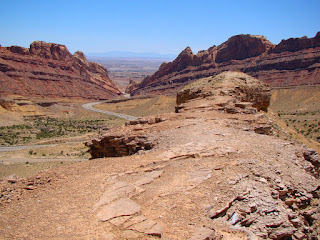 I know this photo below looks cockeyed, but if you look at the telephone poles on the ridge line, you'll realize the camera was level. It was the landscape that was bent. These monoclines were called reefs because they were barriers to east-west travel, just as a coral reef can block access to a harbor. Resistant sandstone layers eroded into teeth-like spikes separated by narrow slot canyons that made passage difficult. The freeway could only be constructed here by blasting a passage through the rock (if you click on the opening photo, you can see the cut at the bottom, with a red car for scale). 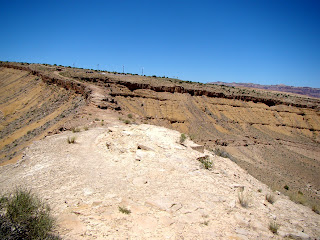 I heard braying while exploring the last rest stop, and saw a small herd of wild burros in the canyon below. 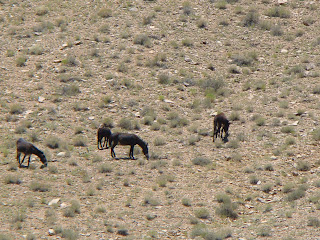 I pulled over as we passed the base of the monocline, and got some shots of the reef looking off to the south. One can see how difficult it might have been to find a passageway for a wagon or a Model T. The jagged white rocks are the Navajo Sandstone, the remains of a vast Jurassic dune sea that covered several states (the Navajo forms the cliffs of Zion National Park). 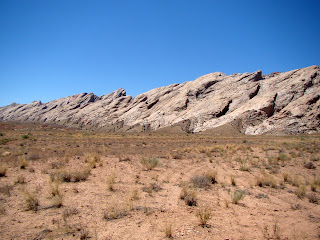 I've heard there are some nice canyons to explore in the area, as long as it is not raining. The slot canyons are notorious for trapping hikers.

The monoclines and domes of the San Rafael Swell were formed by compression of the crust, which was related to the Laramide Orogeny that took place around 80 to 50 million years ago. This event also had a lot to do with the formation of the Rocky Mountains. The monocline hides a large thrust fault in the deeply buried ancient crust, but the overlying sedimentary layers folded rather than split when the fault was active. 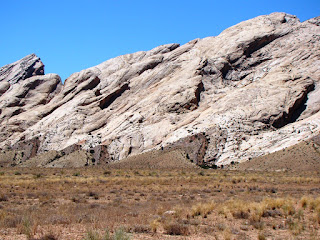 At the base of the reef, horizontal layers appeared again, including the very colorful Morrison formation, the one made famous by the many discoveries of dinosaurs, including the huge brontosaurs (yes, I know they aren't really called that), the allosaurs, and stegosaurs. 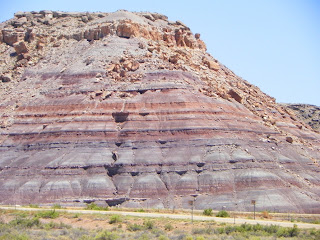 A few minutes later we arrived at the settlement of Green River (population 600 or so) to look for lunch. We decided not to eat at the "Rant Lounge", and settled instead for Arby's. 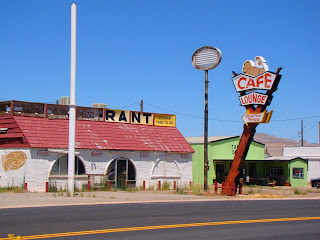 This is such a great geologic adventure. Just makes me anxious for my fall road trip into SE UT.
I think Arbys was a good choice.

Awww, you blew it. Next time, go to Ray's Tavern right downtown. It's famous among the boaters and hikers and canyoneers, and for good reason. Excellent food and family friendly.

I've spent many years exploring the Swell and the Reef. One could spend several lifetimes and not see it all. And just for fun (if I can toot my own horn a little here), read "The Ghost Rock Cafe" for a fun mystery set on the Swell that even includes geologists! If you send me your email (chinlemiller@gmail.com), I'll send you a free ebook copy.