Vagabonding across the 39th Parallel: Who knew the hoodoo was in Castle Rock? 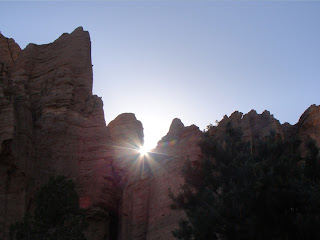 When you set out with no plan (or at least no detailed one), you just never know what is going to happen next, and what interesting places you can discover. We were vagabonding our way across the 39th parallel, and had reached the Wasatch Front in Utah. After looking at a great collection of artifacts and petroglyphs at Fremont Indian State Park, we were looking for a place to camp for the night. Signs at Fremont pointed down a dirt road to a campground. We checked it out, and what a surprise! 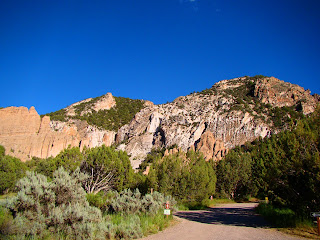 Castle Rock Campground is in a little hidden valley away from the noise of the interstate, and what a setting! The camp is surrounded by an intricate maze of hoodoos and high rhyolite cliffs. How did this landscape come about? And what is a hoodoo? 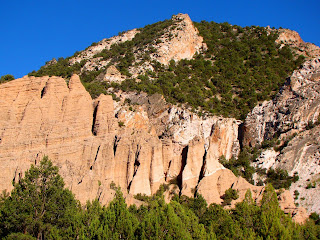 Hoodoos come about when relatively soft sediments include large boulders or capstone layers that can protect the underlying rock from being washed away. The effect produces towers and spires and a maze of winding narrow washes. 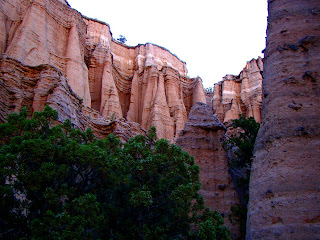 It is an otherworldly effect...kids would love this place, but keep a close eye on them! It's a lot easier to climb up these rocks than to climb down. 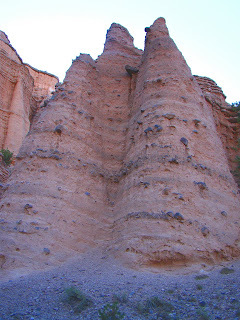 The photography opportunities are unending...the evening light was brilliant. Castle Rock is a spectacular place to camp. The camp itself is shaded by cottonwoods, and is nicely designed with well-spaced campsites. It was practically empty when we arrived (on a Friday!), but a number of people eventually showed up. 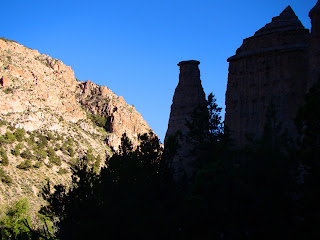 Once we climbed to a vantage point over the valley containing the campsites, we started to get curious about the rocks themselves. They weren't much like the ones exposed at the museum only a mile away, and the rhyolite cliffs were hundreds of feet high, unlike the cliffs down lower, which were only a few tens of feet high. 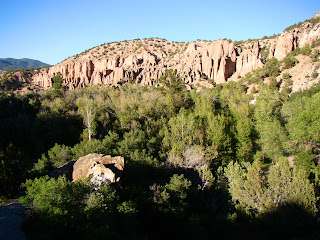 The hoodoos are composed of conglomerate, sandstone, and siltstone, the kinds of sediment associated with deposition by rivers and streams in alluvial fans and shallow lakes. The coarseness of the sediments suggests a local source area. A few light-colored ash layers in the sediments provide the opportunity to date the sediments. 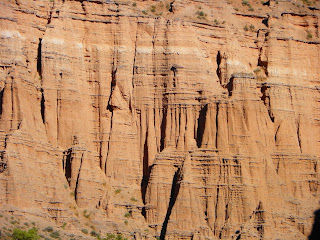 In the last post, we discussed the eruption of the Joe Lott tuff, which took place 19 or so million years ago. Soon after the blasts, volcanism declined, and the region began to stretch. The onset of basin and range extension caused numerous fault valleys to develop, and these local basins started filling with sediments washed from the adjacent uplifted mountains. The layers at Castle Rock were laid down between about 14 to 5 million years ago, on top of the tuff deposits. 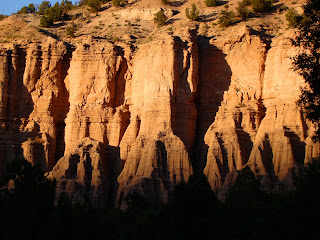 At the upper end of the camp, something else had happened. The layers weren't horizontal anymore, they were dipping steeply to the north, right next to the high cliffs of rhyolite. I wanted to investigate the contact to see what was going on. 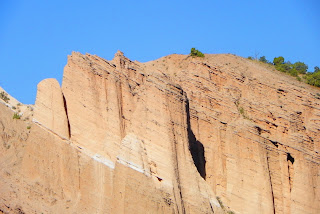 But the sun was dropping below the horizon, so we would have to wait until the next day. 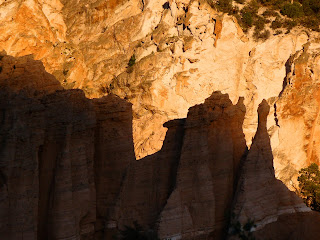 We went to bed under a full moon. 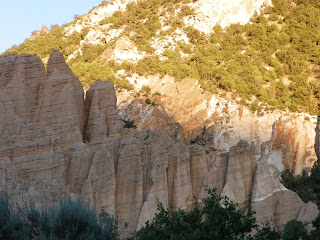 The next morning we scrambled up some rough topography to try and get a view of the contact zone. 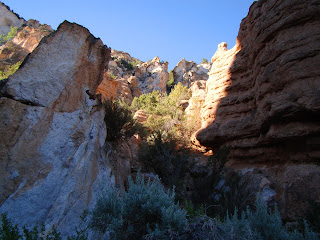 It turns out that the contact is a fault zone, and that the tilted layers represent a drag fold caused by the downward movement of the valley block. The fault is a normal fault (the headwall has dropped relative to the footwall), the kind caused by extensional forces, which is what would be expected here. 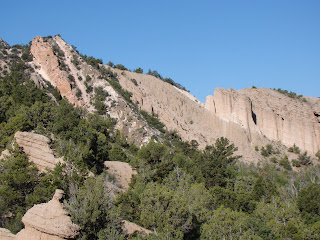 The rhyolite was just as thin as it was in other parts of the state park, but because it had been tilted, it appeared to be much thicker. The deformation caused cracks and fractures in the rhyolite that developed into strange erosional forms like the hollows, arches, and caves of tafoni weathering. 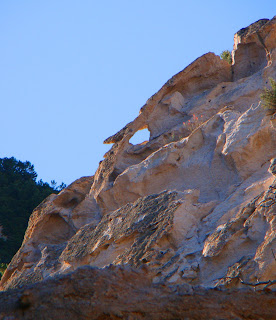 It was great place to explore! After a few hours we packed and hit the road, heading east on Interstate 70, wondering what would come next. The answer wasn't long in coming, but that's another post!

For more information on the geology at Castle Rock Campground, check out:
http://geology.utah.gov/surveynotes/geosights/castlerock.htm
and chapter 12 of Geology Underfoot in Southern Utah, by Orndorff, Wieder, and Futey
Posted by Garry Hayes at 2:34 PM

You couldn't have found a better place to camp if the campground sign had read, "Geologists camp here"