Vagabonding across the 39th Parallel is an informal exploration of the geology of an interesting slice of the American West that I followed in July. Our rules were simple: see something new, or see something we'd seen before, but in a new way. We had been to Mono Lake many, many times (our previous visit was only a few days earlier), but in all our visits we had never spent the night or watched the sun set there. We grabbed some sandwiches at the Whoa Nellie Deli and parked on the near by hill top to watch the twilight envelope the barren Mono Lake basin. Click on the panorama picture above to see what we saw...

What a wasteland! It's dry, so there are vast areas of nothing but sagebrush. There's the lake, but the lake is so salty that no fish can live in it, just fairy shrimp and disgusting brine flies and their wiggling grubs. Nobody goes sailing or swimming in the scummy water. It's a worthless piece of real estate... 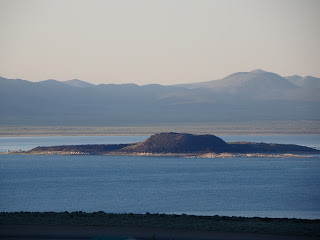 That's the way we judge a place, isn't it? Real estate...monetary value. And that's the way Mono Lake was judged too, for a long time. The water flowing into the lake was going to waste, so Los Angeles diverted the incoming streams, and the lake started to shrink. It was destined to become another dry lake, like Owens Lake did in the 1920's.

Migratory birds discovered Mono Lake thousands of years ago, and found the fairy shrimp and brine flies a rich source of protein to sustain them on their long journeys. As more and more wetlands disappeared along the coast and in the Central Valley because of human development, the Mono Lake area became an ever more important stop on the migratory flyways. Dozens of bird species (and many millions of individual birds) depend on this lake for survival. What is worthless to humans is life itself to the birds. 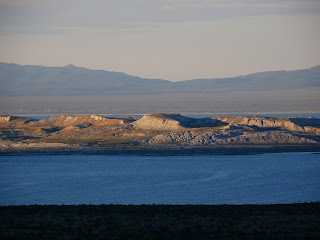 The fight to save the ecosystem at Mono Lake began in the 1970s as researchers started to realize the importance of the lake to the migratory birds. A 1994 decision by the California State Water Resources Control Board required that diversions be reduced, and the level of the lake be stabilized at 17 feet above the lowest post-1941 level. The problems are not all solved; the Mono Lake Committee is a good source of information on current issues.

What is the value of a place? If one tries to put a monetary value on a landscape, many places would be deemed worthless. Mono Lake basin once supported a modest agricultural economy, but the Great Depression destroyed the economy in the region, making it worthless enough for Los Angeles to move in. How many places across the country face similar choices...especially in today's economy? Surely it wouldn't hurt to build just one more dam here, or to build another housing development on farmlands, or drill another natural gas fracking well? It's a difficult issue of course. We have to have the homes, the energy, and the water. But who is looking out for the air, the water, the soil, and the other intangible values of a landscape that ultimately make life possible?

By the way, I bet you could pick up some cheap farmland in Texas right now...it's ripe for development. 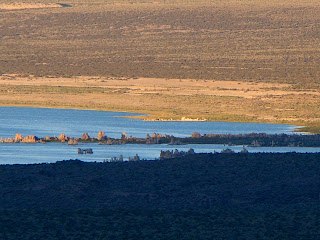 I can talk about another aspect of the value of the Mono Lake Basin. It is one of the most stunning geological landscapes in the country. It is an active fault basin, with numerous scarps attesting to recent earthquake activity. Some of the youngest volcanic features in the U.S. are present on the south shore of the lake at Panum Crater and the rest of the Mono Craters. The islands in the lake (Negit and Paoha are shown in the pictures above) include a recent cinder cone and uplifted lake sediments from intrusions below the surface. The tufa towers, built by the action of algae and freshwater springs, have become a world-famous attraction for tourists. 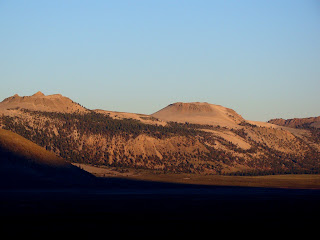 What a shame that the state of California has decided to close their part of the lake, Mono Lake State Park, because the legislature can't see their way to an agreement to fund the park and 69 others that are slated to close next year. Maybe we can sell the worthless land to someone who can profitably develop it?

Anyway, what a beautiful, peaceful sunset, with the moon rising over the Mono Craters. Despite any misunderstandings about my title for this blogpost, Mono Lake is a treasure, one worth protecting.
Posted by Garry Hayes at 10:30 PM

Thank you for your comments on Mono Lake! As escapees to the Eastern Sierra whenever we can, Husband and I have visited Mono Lake several times, but are more intimately acquainted with the Sweetwater Mountains north of the Lake. Still, the proposed shutdown of state services around the lake saddens us. It is such an awesome place!

Oh, and the sagebrush community is a thriving one; on our Eastern Sierra/ Western Sweetwater property we've seen or seen evidence of many other bushes, junipers, pinyon pines, ground squirrels, crows, other birds, badgers, coyotes, and mountain lions. Viva la diversite!

From long past until this last year, shepherds have herded sheep across our(undeveloped)property. But recent changes in ownership down the road have meant that they no longer graze sheep on our property. Our favorite camping spot, normally grazed, was full of waist-high grass this summer. Fire hazard! Viva la sheep! Wish we could have them back!

Oh, my comment on sagebrush was hyperbole! I LOVE the smell of sage when I am in the basin and range country. I went to school in Reno, and spent much time out there. I actually did my masters thesis around the margins of the Sweetwater Mountains back in 1985.

I've never gone up to that knoll to get pictures, I see that I should.
I don't know what "closure" will mean. Other than the boardwalk and a few port-a-potties it doesn't seem like the state does much as it is. Will they pull up the boardwalks? I doubt it. Perhaps the county will take up the maintenance though they don't seem to do a very good job with the county park.

I'm hoping that if the state cannot come to their senses that they would deed the land to the federal government (or a private conservancy). The last thing I want to see at ANY California state park is handing them over to private concessions and businesses.