A Storm in the Desert: Every Day is a Gift 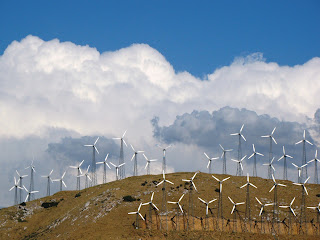 I didn't want to do this drive...a seven hour slog through the most boring part of the Central Valley in Fresno and Bakersfield, and across part of the Mojave desert during the hottest and dustiest time of year. I generally hate the monotony, and it kinda needed to be done. The sky was dull gray blue, and temps were over 100 degrees. Bleh...

Things started to change as we crossed Tehachapi Pass headed east. There were some awesome looking clouds on the horizon. I wondered if we would reach them before we turned south again...

As we drove closer, it got hard to pick out landscape features in the grayness beneath the clouds. Something was certainly going on over Boron and Four Corners (Kramer's Junction). It looked like we were going to go right through it after all. 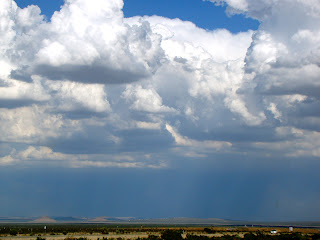 First we got hit with some pretty intense dust clouds that obscured the hills. It was a first wave of sorts for meteorological instability, a cooler downdraft that was blowing pretty hard. We passed the dust and things cleared a bit before we approached the next gray wall of...something. 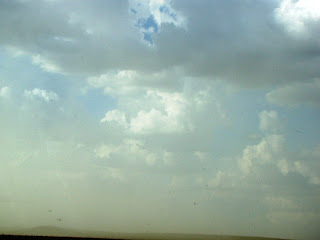 With the afternoon sun at our back, it was clear we were headed into a squall. There was a rainbow ahead of us, with a background of dark gray rain. 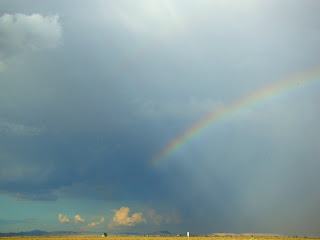 Then the rain hit, hard, and the road ahead almost disappeared. The monotonous drive had suddenly become very interesting, and a little intimidating too. There was a lot of truck traffic headed both directions. 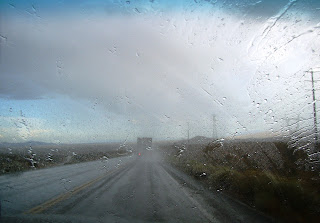 Water quickly ponded everywhere. This is how flash floods begin. Luckily, we were crossing a corner of what appeared to be a pretty intense storm. I'm glad we weren't headed all the way into Barstow. It looked a lot worse that direction. 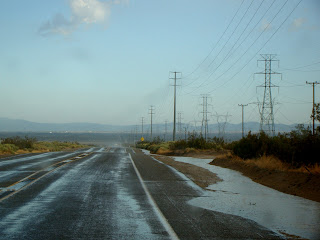 The clouds were intense off to the east...just then we passed through one more squall, and with sun sitting low on the horizon, a beautiful rainbow appeared in front the wall of white cumulus clouds. 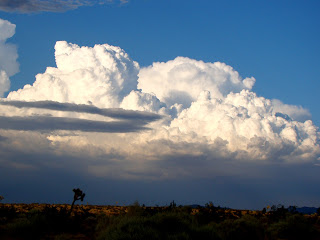 I hit the brakes to stop and snap a few pictures (most of these pictures are courtesy of Mrs. Geotripper, just so you know I wasn't driving and shooting at the same time). The rainbow got brighter and brighter, and when I zoomed out, I saw that it had developed into a double bow. 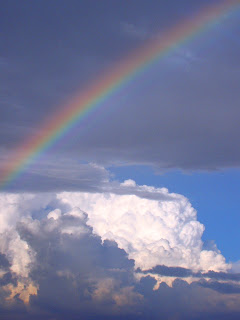 It was just gorgeous. I noticed that the temperature had plummeted, from 100 to 68 degrees within the space of few minutes. The desert was cool, and the sagebrush and other plants smelled just wonderful. 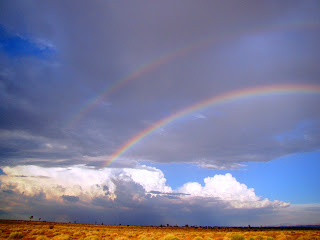 As the sun settled towards the horizon, the storm we were under started to lose energy and broke up. The interplay between the sun and clouds became an astounding palette of gold, silver, black and blue. 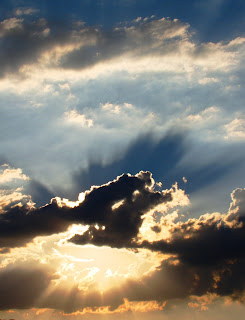 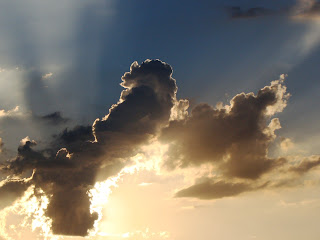 As the sun sank below the horizon, the storm's energy dissipated and the clouds disappeared. We reached the summit of Cajon Pass and descended to our destination in the urban jungle of Southern California. 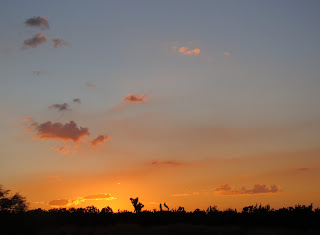 I didn't want to do this drive. It is usually long and monotonous, and we here for a sad and tragic reason. We were given a gift of a wild storm, and were reminded once again that every single day of life is a gift as well.

Rest in peace, David, and may your family and friends find peace as well. You will be missed.
Posted by Garry Hayes at 12:01 AM

That section of road has never been my favorite. The rainbows are a nice touch, as was the drop of temps. Sorry for your loss.