Vagabonding across the 39th Parallel: We Reach the Wasatch Front, Finding Geologic and Archaeological Violence 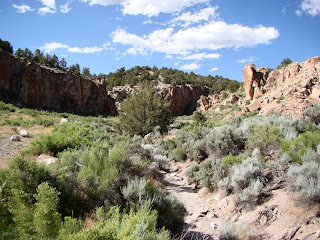 Vagabonding across the 39th Parallel is an informal exploration of the geology of an interesting slice of the American West that I traveled in July this year. In the previous set of posts, we were crossing the Basin and Range Province, an exceedingly lonely region. We reached western Utah, and things started to change. Snowcapped mountains appeared on the far horizon, and the landscape became greener. Agricultural fields appeared, and then, a superhighway. Traffic was moving at 80 mph on Interstate 15, and there was a lot of it. We had reached the Wasatch Front.

The Wasatch Range is the transition zone between the Basin and Range, the Colorado Plateau, and the Rocky Mountains. Faults slice through the mountains, but the intervening valleys are not as deep as they are farther west. There is a feeling (not necessarily justified) here of a certain degree of geological stability. The sedimentary layers that are exposed in the area are generally less deformed, and form plateaus and mesas a short distance to the east. That's not to say that there is no activity. The Wasatch Front is a major seismic zone, and there is an uncomfortable possibility of large earthquakes along the frontal fault system.

We turned off Interstate 15, and headed more or less east on Interstate 70. Our rules of the road for this trip dictated that we did not plan too far ahead, so even though it was late in the afternoon, we still didn't know where we would be stopping for the night. We were discussing where the next KOA might be when we saw a turnoff that said "Fremont Indian State Park". What the heck, let's check it out, we thought.

Did I say that the Wasatch seemed like a stable place? A close look quickly reveals a past history of great violence. Those innocuous-looking cliffs at that park (in the picture at the top, and below), which could be mistaken at a distance for sandstone, turn out on close inspection to be rhyolite tuff.

Rhyolite is the most viscous of volcanic lavas, meaning that it flows almost not at all. It comes out of ground with a consistency something like toothpaste. But if the rhyolite is charged with dissolved gases, it doesn't flow at all; it explodes with great violence. The lava is pulverized into dust particles as it bursts into the atmosphere. The scale of rhyolitic eruptions can be huge, sometimes involving dozens, even hundreds of cubic miles of material. As the eruption wanes, the crust of the earth collapses into the void created by the explosion of ash, forming a huge pit called a caldera. The holes can be many miles across. Hot ash falling to the ground near the caldera often remelts, forming a solid rock layer called a welded tuff, or ignimbrite.

At Fremont Indian State Park in Utah, just such an eruption took place around 19 million years ago, forming the Mount Belknap caldera several miles away to the southeast. The welded rhyolite ash is called the Joe Lott tuff. The volume of the eruption was nearly 100 cubic miles, which puts this eruption in the same league as those that formed the Yellowstone caldera in Wyoming, or the Long Valley caldera at Mammoth Lakes in California. 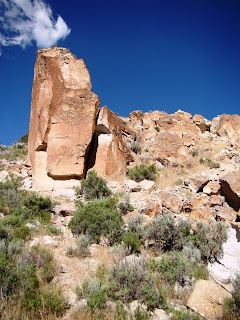 The rhyolite cliffs in the vicinity of Fremont Indian State Park were valuable to the original inhabitants of the region for at least two obvious reasons. Rhyolite often forms obsidian (volcanic glass), which could be formed into sharp tools like arrowheads, spear points, or axes. Cultures with access to obsidian deposits had a valuable and marketable commodity.

The welded tuff cliffs were also relatively soft and easily chipped. The cliffs were an irresistible canvas for chipped rock art, that is, petroglyphs. There are hundreds of them in the vicinity of the park, and a short trail from the museum provides easy access to some excellent examples.

The Fremont people were an enigmatic culture that lived in this area from about 400 to 1300 AD. They didn't construct massive cliff dwellings like those of the late Ancestral Pueblo people farther south at places like Mesa Verde. They lived in less easily preserved pithouses, and farmed maize and beans in a swath of land across central Utah and easternmost Nevada. Their artwork is distinctive and very mystical and symbolic. The meaning of many of the figures is not clear to anthropologists, but I imagine that they are quite obvious to a number of the existing Pueblo cultures who are probably their descendants. 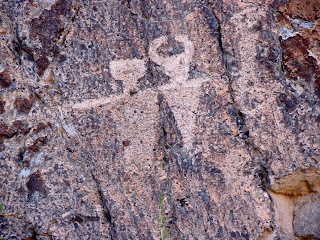 The wavy lines are often interpreted as snakes, although I have seen some speculation that these lines may actually record a memory of violent earthquakes (recall the proximity of the Wasatch fault zones). The petroglyphs on the left side of the picture below are thought to be bird tracks or sprouting corn. 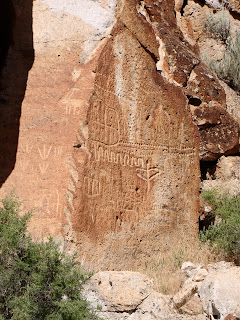 Do you recall a Vietnam War era quote about destroying a village in order to save it? Here at Fremont Indian State Park, they had to save a village in order to destroy it. When the roadbuilders were putting in the Interstate, they had to cut through hill in the picture below. As they started, they discovered a huge Fremont village, the largest ever found. The freeway was going to destroy it. It was excavated, and the artifacts that were recovered became the basis for the collection at the museum in Fremont Indian State Park. I somehow found this conflicting juxtaposition of cultures disturbing.

We had seen a sign that there was camping across the highway. We drove over to check it out; we were in for a big surprise! That will be covered in the next blogpost... 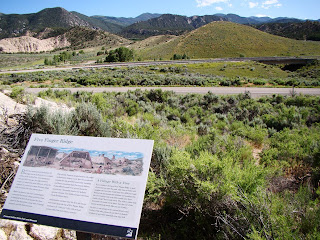 And the road was still built right.

An interesting place combining geology and archeology. Two of my favorite subjects.