Eruptions Across the American West? Uh, no... 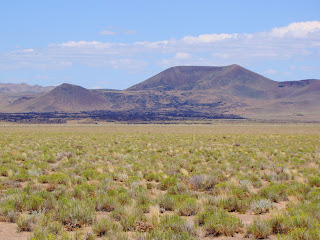 Why, oh why, is this a conspiracy? Someone on YouTube says they think that weather radar thunderstorm images are volcanic eruptions, and the news spreads so fast that a U.S. Geological Survey official has to issue a statement saying that there is no eruption going on. A government denial, of course, is a gold mine for conspiracy nuts, because it gives them some kind of stature. It becomes a story that may or may not fade away...especially as 2012 and the end of the world approaches!

The most ironic thing about this supposed eruption is that the Pisgah Crater sits in full view of Interstate 40 east of Barstow (most of the other alleged eruptions are near highways, too). An eruption would have been reported and photographed by literally thousands of travelers.

Eric Klemetti of the geoblog Eruptions, as always, has the full story. Check it out.

Is it possible that a volcanic eruption could take place in California or anywhere else in the American West? Absolutely! The possibilities range from phreatic (groundwater) explosions at places like Death Valley or Mammoth (look up Inyo Craters or Ubehebe Craters), cinder cone eruptions at dozens of localities (Modoc Plateau, Cascades, Basin and Range, Coast Ranges), somewhat more violent eruptions of plug domes or stratovolcanoes (Mt. Shasta or Lassen Peak), and even the highly unlikely rhyolite caldera eruption of a place like Mammoth Lakes (Long Valley Caldera). California had an eruption sequence at Lassen from 1914 to 1917. The thing is, if an eruption were imminent, the government and U.S. Geological Survey would be actively monitoring events and working to protect lives and property. You can't hide a volcanic eruption, and really, why would anyone try?

I'm sort of disappointed that my UFO and alien post last week didn't go viral this way! The picture above is the Black Rock Crater, a 20,000 year old basalt flow in the Lunar Crater Volcanic Field in central Nevada. It is one of hundreds of young cinder cones scattered across the American West.
Posted by Garry Hayes at 3:41 PM

Darest I say that Mt Humphreys looked like it was exploding during a recent T-storm. Media is all about sensationalism and somebody gets their moment of brief glory. Dumb.