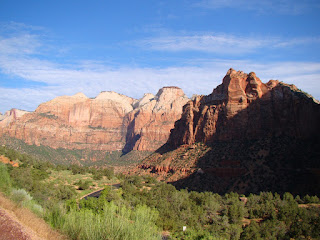 Looks like I'm on the final day of our extended trip, so normal blogging may resume soon! We were leaving Zion National Park before heading across the Nevada desert, and we decided to run up to the Zion Tunnel to have a look around. Years ago I had seen some bighorn sheep along the Zion Arch Trail, and wondered if they still hung out there. 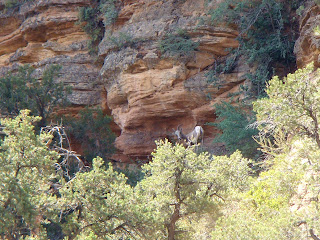 I didn't see anything right away, so I asked the tunnel attendant if the sheep were still around, and she mentioned that they had been there just a few minutes prior. We started up the trail, and I finally noticed a white spot among all the red and green. It was so far away that I had to snap a photo at extreme zoom and then magnify the picture to see if it was a bighorn. To my surprise, it was (see above; click on each of these photos for a larger image). 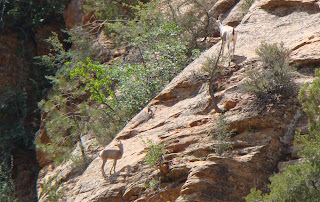 I finally realized that quite a few animals were on the cliffs. A lamb was trying to follow the mother up the rocks. 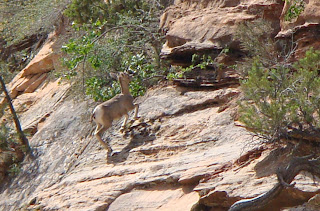 I was startled to see it almost fall... 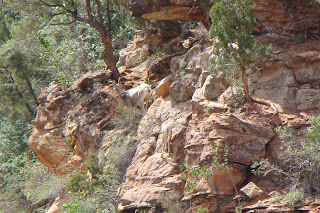 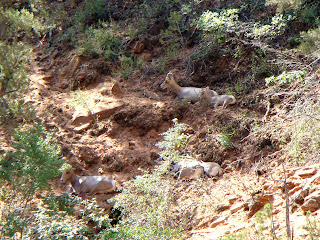 They found their spot among the others, resting in the shade. How many can you pick out? 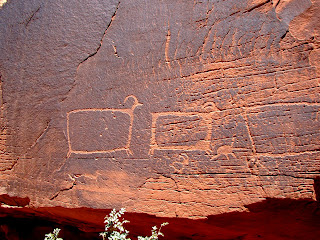 Bighorn sheep were once common across the Colorado Plateau; they are among the most commonly seen animals in petroglyphs throughout the region. They declined in recent times, often because of diseases that arrived with domestic sheep, and because of habitat loss. They were gone from the Zion region last century, but a dozen of them were reintroduced in 1970. There are around 150 in the park today. It was a privilege to see them.

Great sighting. Have never seen Big Horn Sheep in Zion but have seen them down in the canyon every time I hike there. In fact sometimes they are quite close to the trail.