An Encounter with Canis Lupus

It's been a long time since Geotripper has been posting...I've been on a long trip through the Pacific Northwest and Northern Rocky Mountains with my students, and I had exactly no times during the trip when I could access a computer. Smart phones are great for posting twitter notes and facebook updates, but by and large I've been experiencing life outside the cyber-universe. It was SCARY!

OK, not really, but what a trip we had! The students were great, the volunteers (bless them all!) made the trip run smoothly, and the weather cooperated, uh, sorta. Look for an exploration of our travels over the next few weeks.

One of the great moments I had was not really geology-related, but it brought me closer to the landscape than just about any other experience on the journey. If one visits a place like Yellowstone, one is seeing the American landscape in a state that most closely resembles the ecosystem that existed prior to the arrival of Europeans in this country. The last herd of bison in the entire country found refuge here, the grizzly bear still roams largely unimpeded, and numerous other animals can be seen out in the open instead of in cages. There can sometimes be a Disney-like atmosphere as tourists stop in animal-related traffic jams, but sometimes the moments are a bit more contemplative. 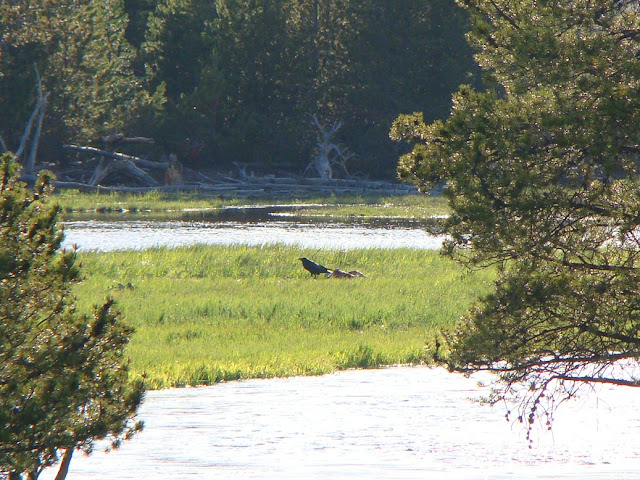 Our group got separated for a few minutes, and when the missing van reappeared, they reported that we really wanted to backtrack up the road and see what was going on. We headed back up the highway, and looked for the thing in the meadow that we were supposed to see. I laid down in the grass and waited. In the telephoto, all I could see was a raven. 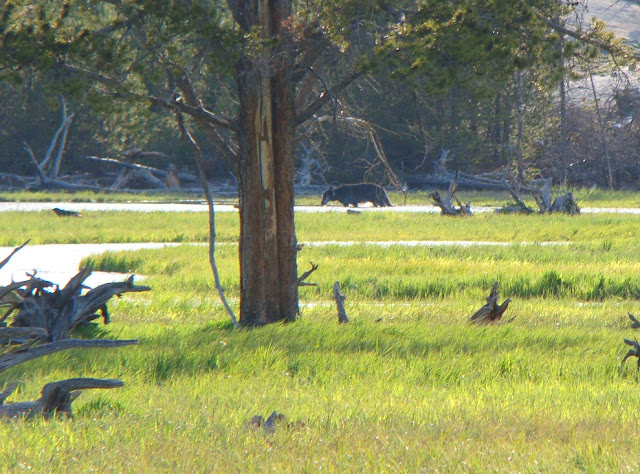 Then, something was approaching from the right, which I took at first to be a bear, but instead, it was a wolf, walking up the other side of the snow-swollen creek. It was the first one I've ever seen. The wolf suddenly turned and crossed the river, and faced down the raven, which was feeding on the carrion that was clearly lying in the meadow. It was obviously the wolf's kill. 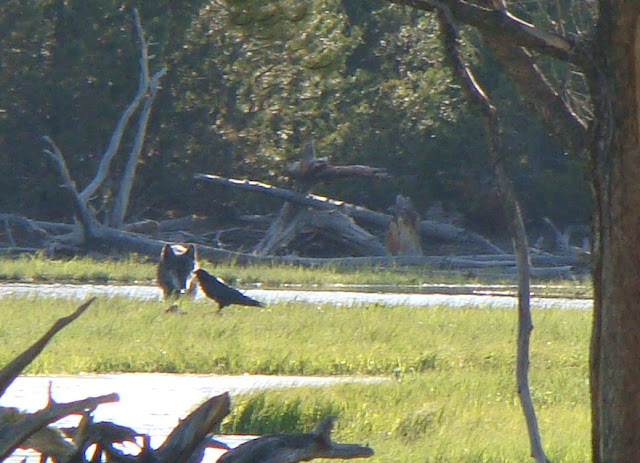 The raven clearly knew it was outmatched, and retreated quickly. 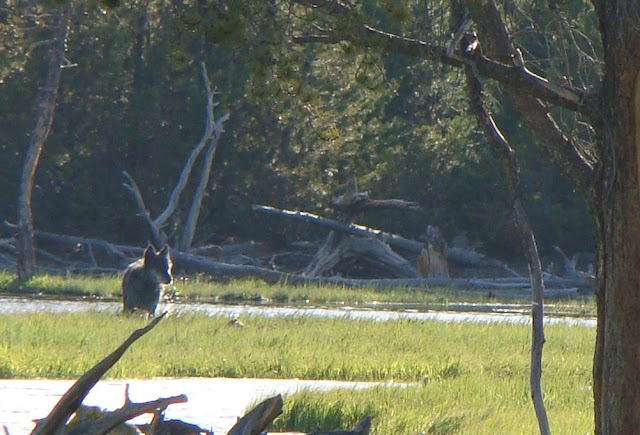 The wolf settled down for another meal (look at that fat belly!). Can you tell why I thought it was a bear at first? 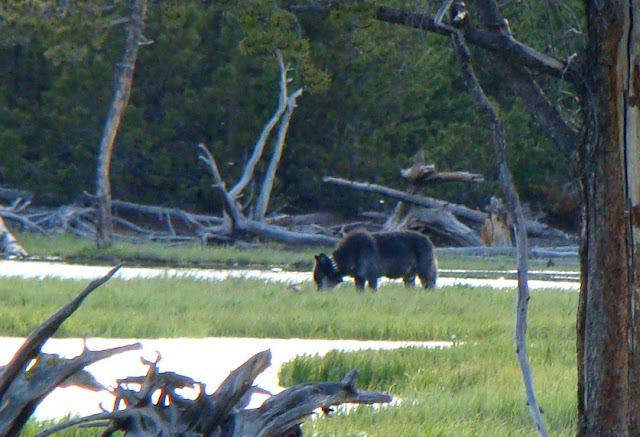 He finished his latest meal, and started off. 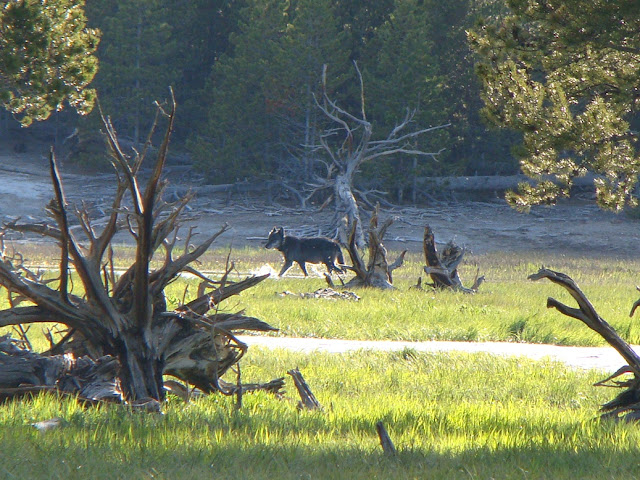 He was a bit worried that we might want some of his kill, but given that we were about a quarter mile away (these are obviously extreme zoom shots), he didn't see us as much of a threat. 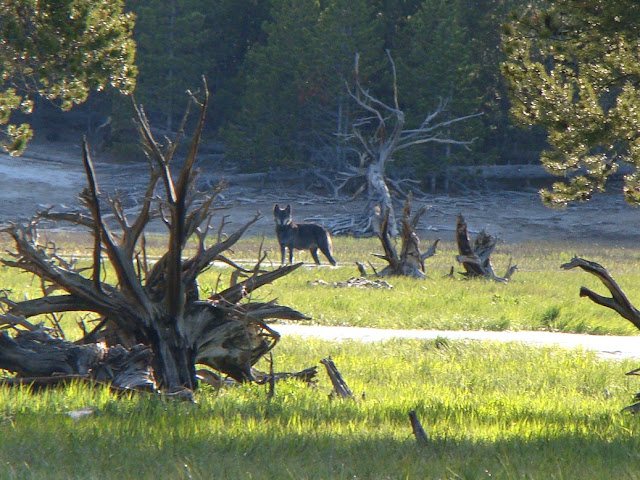 A bit further up the hill, he checked us out one more time... 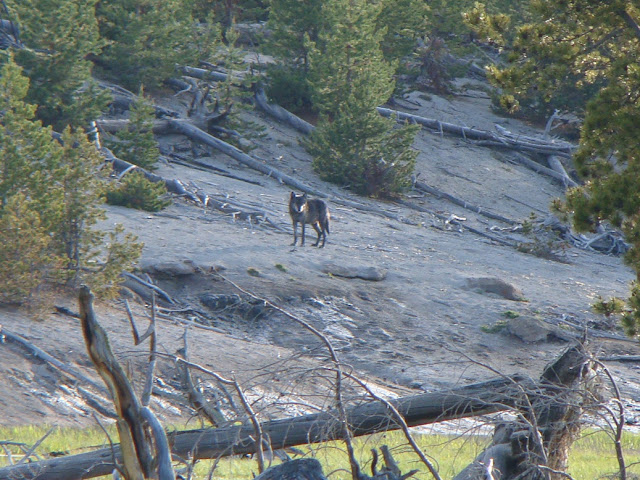 ...and disappeared into the forest... 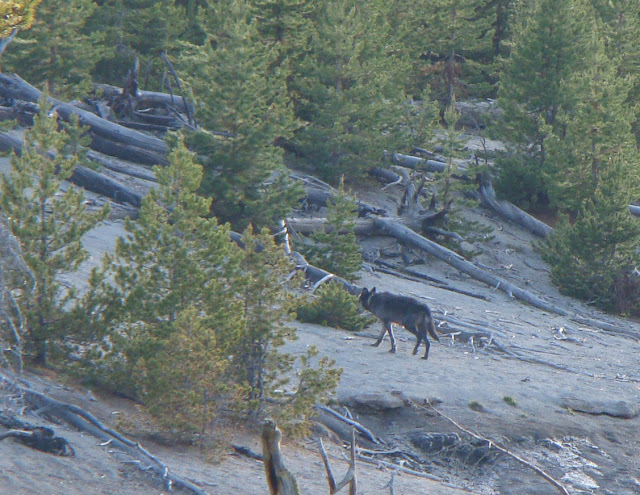 The folks from the other van reported that the wolf they saw was silvery or white. We are guessing that we were looking at a family unit, and that they were feeding some pups up in a den nearby. Who knows?

It was a wonderful moment to see some of these last examples of the North American megafauna living in their world where they are not harassed by hunters or poachers. The wolves were reintroduced to the park a number of years ago, putting back in place a jigsaw puzzle of creatures large and small that interact as they did long before humans arrived on the continent. Yellowstone is only a fragment of the original forest biome, almost like a zoo, but it is a very big zoo, and it is as wild as any place in the lower 48 states. Most of the park is wilderness, and the animals we tourists saw just happened to be on the edge.

Another moment on the trip was a bit embarrassing for me, and will probably become one of the department legends. We were leaving our campsite at Glacier National Park, and I really wanted to see a bear. I really did. We were approaching the St. Mary Visitor Center, and I saw the bears! They were hanging out in the meadow by the river. I got on the CB and told the vans to stop and get their cameras. We were looking at the animals out there, and there were a few ahems, and finally one of the students said "Mr. Hayes, I don't think those are bears..."

Oh well, click on the photo to enlarge, and judge for yourself... 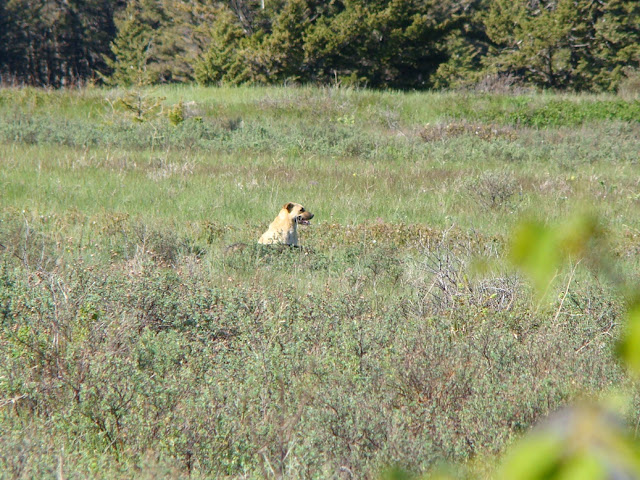 Did you know that bears and dogs share a common ancestor? So in a sense, I sorta saw a bear "type" out in that meadow. I did see one grizzly on the trip, for a split second at the edge of my peripheral vision as I drove past an animal jam, but I guess I'll just have to go back when I have more time...﻿
Posted by Garry Hayes at 10:18 PM

Howdy Garry, I've recently been considering changing my major to Geology because of my love for the environment and my fascination for how the earth "works". I found your blog through searching for people in the field and think it's quite awesome what you do with you students to get them out in the field! Seems like you enjoy your job! Thought I'd share my thoughts and appreciation for you talking about the importance of earth sciences

How exciting to see a wolf and at a kill no less. Very cool.

Look forward to much more about this adventure.

Hey Gary, thanks for this post. Your excitement is so tangible and so inspiring! Living in the Bear Flag state I spent many bike rides through the meadows and forests of Santa Cruz imagining how it must have been when it was a bit more wild, when big brown bears were roaming the hills and beaches. The reintroduction of wolves to Ystone was so controversial at the time, and has been very successful. Small parks do not add up to large parks. Amen.

I hope I can go on one of your field trips in a few years when I retire. Love your posts! Wonder whose dogs those were? Shouldn't be loose in a National Park. Did anybody on your trip inquire about that?

Wow Garry. What great photos of the wolf, and the raven. I am enjoying catching up on your travels, especially since you, Mrs. Geotripper, and entourage were able to visit Grant Village.
Just a comment, though, on your statement that "most of the park is wilderness."
No part of the park is actually designated wilderness under the Wilderness Act of 1964 - according to the Yellowstone Resources and Issues 2011, In 1972 90% of Yellowstone National Park was recommended for federal wilderness designation. Areas near roads, around major visitor areas, around backcountry ranger cabins, and in previously disturbed areas are not included.
Congress has not acted on this recommendation. However, these lands are managed so as not to preclude wilderness designation in the future.
The most recent (sorry, no date) Yellowstone wilderness recommendation sent to Congress was for 2,032,721 acres.

Thanks for the info, Nina. Since many of the parks I am most familiar with are officially wilderness, I assumed this was true for Yellowstone. It's too bad they can't get around to establishing the wilderness areas. I was sorry to hear about the bear attack, by the way. It must be upsetting for park personnel when that happens.