It Isn't Just Deer and Antelope; Horses at Home on the Range 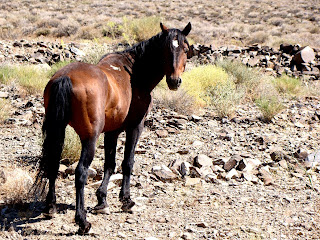 A number of people replied with the correct answer, but Silver Fox from Looking For Detachment had the most accurate: "...wild pre-horses...were here, then native Americans, then the Spanish and their horses which became the first wild horses of Recent times, then ranchers & miners NNITO, with many current wild horses now descended from escapee ranch horses with some Spanish-horse wild blood, modified and bred somewhat by native Americans post-Spaniards..."

The heritage of the horses is one of the greatest stories of evolution in North America. When the dinosaurs were removed from world ecosystems by events at the end the Cretaceous Period (65 million years ago), various kinds of smaller animals began to evolve to fill available environmental niches. Birds and mammals were highly competitive in terrestrial environments, and within several million years, many new species appeared in the geologic record. 52 million years ago, a small browsing animal called Hyracotherium fed on leaves in the forests. It was the size of a fox, with five toes per foot (though not all were used in locomotion). It was the earliest horse-like ancestor. Over the millenia, dozens of horse-related species evolved, with fewer toes and more highly developed hooves.

In the mid-Cenozoic, the forests were receding and vast grasslands began to develop. Some of the horses adapted to eating the grass, developing constantly growing teeth that could withstand the silica and dust without being worn away. They also grew larger and faster in order to deal with predators on the open plains. At times, a dozen or more different species of horses co-existed.

The horses were creatures of North America. Groups of them migrated into South America around 3-4 million years when the continents were joined at the isthmus of Panama. Another group migrated over the Bering Land Strait into Asia about the same time. But their home, the land of their ancestry, is North America. They thrived until around 12,000 years ago, when they and the 30 or so other species of the North American megafauna went extinct. The horses, camels, short-faced bears, giant beavers, sabertooth cats, American lions, dire wolves, and wooly mammoths all disappeared. The reasons are not known with certainty, but climate change related to the end of Pleistocene Ice Age is one possible culprit. Predation by newly arrived human beings is also suspected. There is even a controversial hypothesis regarding a possible meteorite impact. 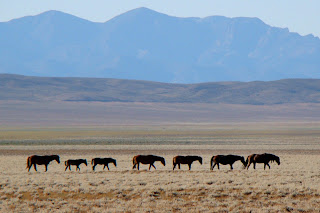 I grant that others have greater expertise than me on these matters, but the climate change idea seems problematic because there were many ice ages, more than a dozen, so why didn't these animals go extinct at an earlier time? The meteorite impact idea is highly controversial, and lacks supporting evidence. Human predation makes the most sense to me, but further research will certainly be needed.
So, when Columbus and other Spanish explorers and invaders arrived in the New World with their horses in tow, they were bringing those horses back to their ancestral homeland. They did well in the wild, and over the centuries have been naturalized into the arid landscape of the Basin and Range province. Their existence is controversial, since they compete with cows and sheep for forage, and until federal legislation brought some level of protection, they were hunted and killed by ranchers. Today, they are "managed" by the Bureau of Land Management and other federal agencies, for better or worse.
I guess I'm wading into a huge controversy over the management of the horses, but I find it disturbing that there are many who only appreciate horses when they are doing work for us. Wild horses living free on the open range are to them a nuisance, as are the coyotes, wolves, and other predators that happen to eat the occasional cow or sheep. The lands the horses inhabit belong for the most part to all of us, not just the ranchers who borrow these landscapes. What I also know is that there is something beautiful about seeing these animals in the wild. There are so few creatures of the North American megafauna left, so it is a gift to see these creatures running free.
Posted by Garry Hayes at 10:19 PM

Ah yes the little horses. Nice they made it full circle. And even better to see them roam free.

My money was on the horses, too.

I could not agree more with your final paragraph - very well said.

Excellent final paragraph! I'd rather see wild horses than a herd of cattle or sheep on BLM land any day.