Time Beyond Imagining - A Brief History of the Colorado Plateau: The Real Jurassic Parks 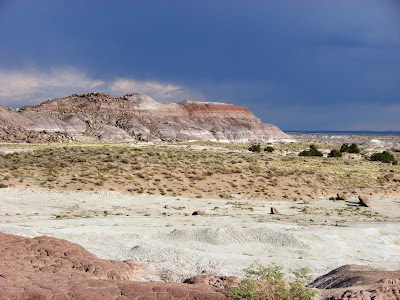 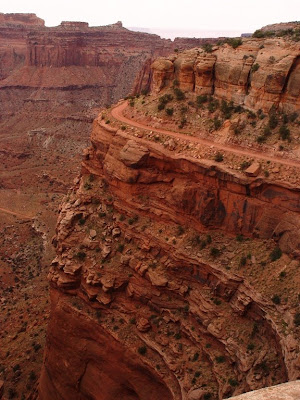 As we move forward in time, we reach the geologic period called the Jurassic, one of the few units of the geologic time scale that is familiar to many laypeople. We have Steven Speilberg and Michael Crichton to thank for that, and yes, dinosaurs rose to prominence in the terrestrial landscape, but lots more was going on as well, including a lot of interesting non-dinosaurs, including our own small furry predecessors creeping about in the underbrush (the mammals first appeared in the late Triassic, about the same time as the first dinosaurs).

So what are the real Jurassic Parks? In the movies, the park was an island populated by reconstituted dinosaurs that ate people and each other. The Jurassic Parks of the Colorado Plateau are the ones in which the most dramatic scenery is provided by Jurassic-aged rocks, which include the Wingate, Kayenta, Navajo, Carmel, Entrada, Summerville, and Morrison formations. The parks include the familiar Zion, Arches, Capitol Reef, and Canyonlands national parks, and the less familiar Grand Staircase-Escalante, Navajo, Rainbow Bridge, Vermilion Cliffs, and Colorado national monuments. Notable state parks include Kodachrome, Goblin Valley and Dead Horse Point, all in Utah. Many of the dramatic cliffs included within the Glen Canyon National Recreation Area are also made of Jurassic rocks. And let us not forget the actual Dinosaur National Monument, the one that actually has dinosaurs (although at last report, they did not eat park visitors).

Today's photos include a parting shot of the Chinle Formation at Petrified Forest National Park, simply because I came across it in a lost file and liked it, and a picture from near the head of the Schafer Trail in Canyonlands National Park, which is cutting across ledges of the Kayenta Formation as it prepares to plunge down the Wingate cliffs to the White Rim, discussed in a previous post.

The Schafer Trail leads to the White Rim Trail, which winds for a hundred miles or so through the heart of Canyonlands National Park. It is one of the life-list goals that I haven't accomplished yet. It pretty much requires at least two days to travel, and three or four days by bike. The Schafer Trail was originally carved by cattlemen and improved by uranium miners (they worked pretty hard...).

So, why the dramatic colorful cliffs? Something important had changed, causing the Triassic floodplains to disappear. The silts and clays and river channels were replaced by desert dune sands, which quite often form prominent cliffs when hardened into solid rock. The deserts formed because Pangea had begun to break apart, and North America was now moving northwest, into the subtropics where the prevailing air circulation results in dry conditions. We see a similar situation in the Middle East and Sahara Deserts today.
Posted by Garry Hayes at 10:09 PM