Time Beyond Imagining - A Brief History of the Colorado Plateau: On to the Grand Staircase 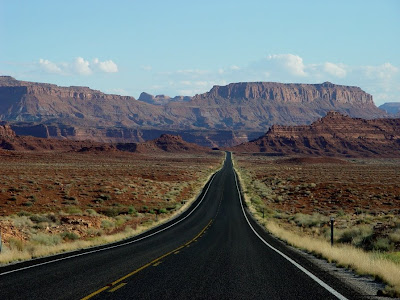 Picture by Susan Hayes
I have enjoyed exploring the Grand Canyon on this blog over the last few weeks, using the incredible gorge as an introduction to the history of a unique corner of North America, the Colorado Plateau. A layperson could be forgiven for thinking that the history of the world is written in the walls of the Grand Canyon given the rich story told by the rocks there, but there are many parts of the story missing. So Geotripper is going to hit the road and start exploring some other corners of the Plateau country. We will return later to the Grand Canyon because we still have not explained how the canyon itself developed, but that is actually one of the last events in the history of the region.

What is it that is missing from the story? Well, imagine this: standing on the rim of the Grand Canyon, you can look down and see nearly 2 billion years of earth history in the mile of cliffs below you. Now, look up. Today you see only sky and clouds...but not that long ago there was at least another mile of sediments covering this landscape. Another mile! These rocks recorded the Mesozoic and Cenozoic history of the region, the 245 million years leading to the present day. Putting it another way, the entire history of the dinosaurs, the birds, and the mammals.

How do we know they were there? The Mesozoic rocks are found north and east of Grand Canyon, sitting on top of the Paleozoic rocks. The most striking exposure is a series of cliffs visible from the Kaibab Plateau north of Grand Canyon long known as the Grand Staircase. Named for the dominant color of each of the cliffs (the Pink Cliffs, the Gray Cliffs, the Vermilion Cliffs and so on), the region includes several famous national parks (Zion and Bryce Canyon), but also some less familiar national monuments and state parks (Grand Staircase-Escalante NM, Kodachrome State Park, Coral Pink Sand Dunes State Park and others).

Our next post will look at the world of Pangea and the Triassic Period. Some very strange animals are coming up.
Posted by Garry Hayes at 5:41 PM