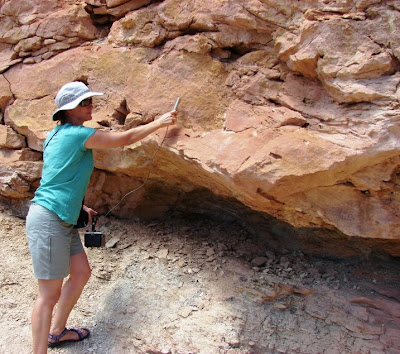 How do you tell someone that the cigarettes are going to kill them? Even today, after 30-40 years of clear connections between smoking and cancer, people don't take the warnings seriously. Why? I don't smoke, and I never understood the intensity of the addiction. But part of it is the long delay between the act and the consequence. Hit someone on the head with a stick, and they immediately understand that sticks hurt. But if they don't feel the pain until 30 years later, well....

I've held a chunk of pure uranium in my hand, and it is simply a piece of metal, and not necessarily dangerous outside the body. But... the unstable isotopes do produce radioactive byproducts, including radon gas. And those byproducts are dangerous, especially in human lungs. But unfortunately, like cigarettes, the effects may not show up for a decade or more following exposure. The longer the exposure, the more likely the bad consequences, mainly lung cancer.

The miners in the 1950's worked in poorly ventilated shafts in which radon accumulated at thousands of times the currently established safe levels. They worked in ignorance, because although the danger was suspected decades prior, mine operators and the federal government couldn't be bothered to warn them or provide adequate ventilation. Cold War security concerns trumped safety concerns (it wasn't just the mines; the effects of atomic bomb tests in the southwest have been well-established), and anyway lots of money was being made.

Just like cigarettes, the consequences didn't appear for years. But by the 1960's the miners were starting to fall ill and die from lung diseases. Hundreds, who knows, maybe thousands were sickened and killed. But it didn't stop with the miners.

Thousands of mines produced millions of tons of tailings contaminated with uranium. Few regulations existed to keep the tailings from leaking into nearby rivers and watercourses, or from leaching into the groundwater, and even fewer to prevent dust from blowing about. Houses, schools and other buildings were built on contaminated soils. The full effects are only beginning to be recognized

One of the most egregious pollution problems involved Charlie Steen. Impatient with the distances to government uranium mills and the transportation costs involved, Steen's company constructed the Atlas Uranium Mill in Moab literally on the banks of the Colorado River. The mill closed decades ago but the tailings leached and leaked into the Colorado River for years. At this time, reparation work is being done and the tailings are being removed to a safe site 30 or 40 miles away. I am sure they are doing a great job...

So, you've never lived on the plateau, you weren't a miner, so "why, me worry?". Leaving aside the whole contamination of the Colorado River issue, there are unexpected connections. For quite a few years I knew there was some kind of an old mine right on the south rim of the Grand Canyon a short distance west from the El Tovar and Bright Angel Lodge. The rim trail, hiked by thousands every year, takes a long detour around the fenced 10-acre site. I always assumed it was another old copper mine, like others I had seen in my travels. It is and it isn't. It is the Orphan Mine, a turn-of-the-century copper mine in which uranium was later discovered. The uranium was mined from 1953 to 1972. Extraction rights were actually retained as late as 1988 (see the hyperlink above). The site is contaminated with ores and waste. I've heard that the dust-covered miners knocked off work and enjoyed a meal at the lodge before heading home, leading to speculation that geiger counters would have been beeping inside the restaurant.

The mine has been shut down for 35 years, so whatever...except for the headline I saw this week, via Arizona Geology. The problem at Grand Canyon National Park is that the park boundary is only a short distance south of the rim. The rest is national forest or Bureau of Land Management and is open to mining. Uranium prices are very high, and interest has been building in a renewal of mining. Thousands of mining claims are being established, and the BLM continues to process requests despite a congressional moratorium; the agency doesn’t consider the Congressional vote valid.

At least the Navajo people, as a sovereign government, have the right to block renewed mining. As Kim noted in the comments on my last post, they have placed a moratorium on new development on their lands, and work continues, however slowly, to heal their lands of the damaged caused by Leetso, the Yellow Monster.

And what are we gonna do with all of the used reactor waste? Who knows. Just remember, like our politicians tell us, that nuclear power is our "clean" bridge to a bright energy future...
Posted by Garry Hayes at 9:40 PM

Minor correction: actually all of the isotopes of uranium are radioactive - uranium has no stable isotopes.

Thanks...I was writing fast, and confused the stuff they try to concentrate for bombs versus the depleted stuff they use for bullets, but which is, come to think of it, still radioactive. I've corrected the post

Hi MJC,
I've familiarized myself with the Navajo story and Leetso, so I am curious about how you feel about the proposal by Virginia Uranium to mine and mill a huge deposit(s) of uranium ore in a rural but populated area in Virginia. Most residents there depend on private water wells, and we're told that VUI would likely have to mine by the old open-pit method rather than ISL. The climate is prone to severe weather, including multiple high wind warnings issues earlier this year, flash flooding, severe storms, tornadoes, etc. Creeks and streams border the proposed mining area, and it's in such close proximity to farm land, cattle, etc., that long-term effects from possibly several decades of this are a grave concern. Any advice?

MJC, I was wondering if you had ever met Charlie Steen. I haven't, but his son was in a class of mine quite a while back.

ISL, btw, apparently stands for in-situ leaching or in-situ recovery (ISR) or solution mining. Uranium mining is currently not allowed in Virginia, so, anonymous, keep in touch with your legislators!

I never had the opportunity to meet Charles Steen, I am sure it would have been interesting to hear his story, and if Raye Ringholz got it right.

I am not an expert in Uranium (see Ron's comment above), but I have followed the cultural effects of mining on the Plateau, and the effects of gold mining in my own backyard, and they are considerable. I ran across the Virginia proposal while surfing for some additional info for my post, and my gut feeling is that the state is probably on the right track for keeping a moratorium on mining. I may be cynical, but all the arguments that are going to be made in favor of mining are going to be about the need for energy independence, how safe it is going to be, how "clean" a source of energy it is, and so on. But deep down, it is all about money and profits, and environmental and social concerns are considered a hassle, and a bite out of profits. Companies will do only what they are forced to do, and nothing more, and our government does not have a good record in protecting people when money and profits are on the table.

I'm sure the company would have a different take on this, and as I said, I'm no expert. But that's my opinion.