Time Beyond Imagining - A Brief History of the Colorado Plateau: A Final Transgression 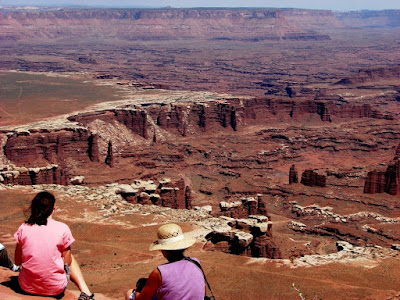 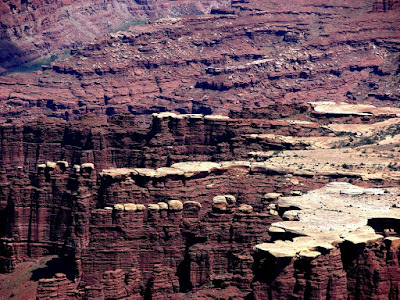 With today's post we reach the rim of the Grand Canyon, and the end of the Paleozoic rocks of the Colorado Plateau. But these pictures are not of the Grand Canyon, although some similarities exist. Both canyons were carved by the Colorado River, for instance. We are in southeastern Utah at Canyonlands National Park. Our vantage point is the Island in the Sky plateau that overlooks the confluence of the Green and Colorado Rivers. Unlike the Grand Canyon, the oldest rocks visible are Permian in age, and the upper canyon walls are in Mesozoic rocks (the age of the dinosaurs, basically).

Hikers in the Grand Canyon who have a geological background don't measure their progress in miles and feet the way normal people do. We note our location by the strata through which we are strolling. The base of the Supai Group means a long slog through red dirt. The base of the Redwall almost always means a tough climb is ahead. The greatest relief to geological hikers is to arrive at the top of the Coconino Sandstone, where we realize that only two more formations lie between us and a cold beer or iced tea: the Toroweap Formation and the Kaibab Formation. Both are easily visible in yesterday's post, the Toroweap as the forested slope above the sheer Coconino cliff, and the Kaibab as the ledgy cream-colored cliff forming the rim of the canyon. Like the Coconino, both formations are Permian in age, the very latest part of the Paleozoic Era.

The Toroweap Formation is rather variable in composition, ranging from dune sands, evaporites (forming in drying bodies of water), and limestone. It formed in a time of changing sea level, where the shoreline transgressed and regressed repeatedly, forming dune fields, tidal flats and sabkhas (coastal salt flats). Fossils are generally rare, given the harsh conditions in which the rocks formed.

The Kaibab Formation is more marine in origin, being composed of limestone, dolomite, and sand. In many places chert nodules can be found. The chert is a form of altered quartz that can develop long after deposition. The layer is rich with fossils: crinoids, brachiopods, sponges, bryozoans, shark teeth, nautiloids, fish, and some of the last trilobites to inhabit the earth (the Kaibab Formation on the North Rim of the Grand Canyon was the site of my first childhood fossil discoveries). Many of these species were doomed: the end of the Permian was marked by the worst mass extinction event ever recorded. Something like 95% of all the species on the planet disappeared, for reasons that have not yet been determined, although many hypotheses are proposed.

So why the pictures of Canyonlands National Park? Note the white rock layer sandwiched between thick layers of red rock. This layer is appropriately called the White Rim Sandstone (the White Rim is a very prominent terrace in Canyonlands), and being Permian in age, is related to the Coconino, Toroweap and Kaibab formations. The sea that formed the Kaibab and other late Permian marine layers transgressed from the west onto the continent. This is indicated in part by greater thicknesses to the west. On the other hand, the farther east and north that one travels, these layers become thinner. And thinner. By the time we reach Canyonlands National Park, the marine sands are only a few feet thick and then pinch out. We are looking in these photographs at the last beach of the last Paleozoic sea.

We have reached the rim of the Grand Canyon, and the end of the Paleozoic story. The reconstruction of the supercontinent Pangea was complete. World ecosystems had been devastated by extinctions almost beyond imagining. The world had changed completely, and the Mesozoic age had begun. Dramatic changes are coming! In another post, though....
Posted by Garry Hayes at 10:59 PM