Time Beyond Imagining - A Brief History of the Colorado Plateau: This Yellow is NOT Mellow 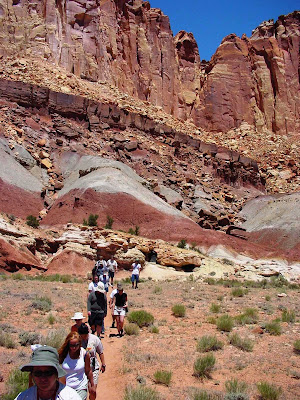 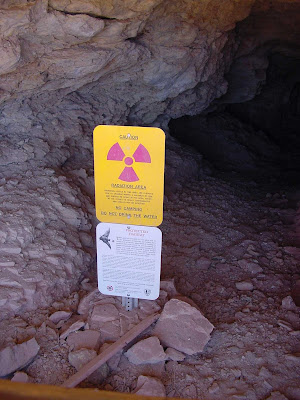 The Triassic-aged Chinle Formation is well known for a particular resource, and the heritage of the extraction of that resource is a story of tragedy and appalling governmental indifference to the safety and health of its citizens. It is known to the Diné (the Navajo people) as Leetso, the Yellow Monster.

The base layer of the Chinle in many places is a conglomerate/sandstone unit called the Shinarump Member. It was laid down in streams and channels cut into a surface of the underlying Moenkopi Formation. Groundwater could flow freely through the unit, and it carried dissolved metals. When the metals encountered carbon rich fragments like wood and plant fossils, the metals precipitated out, forming a yellow powdery mineral called carnotite, or a dark oxide mineral called pitchblende. These minerals are the primary ores for uranium.

Uranium has had a long and spotty history. It has the familiar and well-known uses as a source of energy, and in bombs. It has been used as a color source in glazing and glass-making, producing intense green and orange hues, and was even touted many years ago as a health aid. To geologists, uranium is an incredibly useful tool; because it is radioactive, it decays at an extremely regular rate, giving us an accurate method to date the formation of many kinds of igneous rocks (the more familiar term carbon-dating refers to a method of dating archaeological artifacts composed of wood, shell or bone; uranium age dating is far more versatile and useful for geological research).

Uranium had been found on the Colorado Plateau prior to World War I, mostly as a by-product of vanadium mining and the search for radium. Today's pictures are of the Oyler Mine in Capitol Reef National Park, which was active in the early 1900's with little recorded production. It is a real attention-getter with my students, because we carry a geiger counter when we approach the mine, and it starts beeping within 30 feet or so of the mine openings.

The discovery of atomic fission and the development of the atomic bomb in World War II drove the renewed search for uranium on the plateau. The United States was importing something like 90% from foreign sources, and the government deemed it to be a critical resource. In the aftermath of the war, the Atomic Energy Commission sponsored a uranium rush, providing maps, roads, and financial incentives to anyone willing to explore the wildlands of plateau to find the ores. It was a hard and dangerous existence, but several thousand people heeded the call and fanned out over the countryside looking for the elusive yellow powder.

One of those involved with the search was Charles Steen. A geologist with a "problem with authority", he arrived in Utah in 1949 with a wife and three small children after a truncated career in the oil industry. Dirt poor, he couldn't even afford a geiger counter. He mortgaged his mother's house to purchase a drilling rig, and using his geological training, he determined that ores might exist in the Lisbon Valley near the Colorado/Utah border just a few dozen feet below the surface. As the story goes, he broke the drill rig short of his goal, but he later found that the drill chips stored in his jeep turned out to be nearly pure uranium ore. In the blink of an eye, he was a rich man and uranium mania swept across the plateau (I suggest the book Uranium Frenzy by Raye Ringholz for a great narrative on the boom).

Thousands of people flooded into the region, changing it forever. More than a thousand mines were drilled, uranium processing facilities were built, bombs were made and exploded, and a vast amount of money was made (and lost). America had entered the atomic age, with her bombs a hedge against the frightening communist threat (except they got the bomb too), and the promise of safe, clean atomic energy so cheap it wouldn't have to be metered.

But as always seems to be true, the dreams didn't exactly match the reality.

Tsoodzil, near Grants, New Mexico, is one of the four sacred mountains of the Navajo people. The Europeans called it Mt. Taylor. One of the biggest uranium discoveries took place on and around the mountain, and one of the largest underground mining operations plumbed the depths beneath the mountain. No one consulted with the Navajo or any other Indian nations over possible cultural objections, because, of course, national security overrode all other concerns. Thousands of miners labored under the ground in the poorly ventilated tunnels. But, there was money to be made after all. But an evil had been released, and few of the people involved would be aware of it until it was too late.

Representatives of the Navajo Nation have this to say about uranium:

The Navajo Nation has decided not to allow uranium mining on its land this time around. The US government has only just begun to compensate the miners for illnesses associated with exposure to radiation, and the need for clean up of tailings and dust from the mines has just begun to get attention. (Durango, in contrast, has had its uranium tailings, from milling the ore from western Colorado, removed from the Animas River floodplain years ago.)

Its worth noting that the major monograph on Chinle Formation stratigraphy, a USGS Professional Paper by Stewart et al. (1972), was funded by the Atomic Energy Commission.