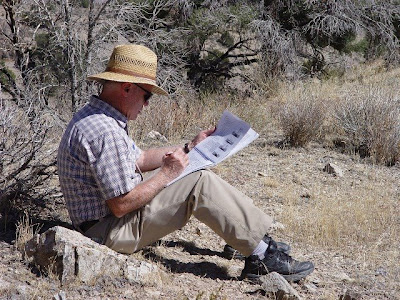 This month's Accretionary Wedge Carnival is (was) hosted by Callan Bentley at NOVAgeoblog, and is on the rather wide open topic of geologic connections. I'm a little late, having been distracted by the beginning of a new semester: those first hours of excitement, expectation and enthusiasm, followed by fifteen weeks of perceived pain and suffering (at least that is what MY students say).
The start of a new teaching year gave me the idea for my contribution to the Wedge this time around. I am a teacher, I was taught by a number of excellent teachers, and they in turn had teachers. I was vaguely aware that some of my professors studied under some illustrious individuals, and I even met a few of them, but I had never really considered looking into the academic lineage of those who taught me geology. I was in for a few surprises.
I found out right away that lots of mathematicians, chemists and physicists have an academic lineage on the web, but I couldn't locate many for geologists (not that I spent hours on the subject or anything). But there was enough to construct an academic lineage (sort of) for myself going back to the late 1700's. There may be a few mistakes here, and apparently a lineage is supposed to follow the thesis advisors, but I'm gonna cheat just a little (a lot) on the rules, so here we go...
I got my bachelor's degree in geology at Pomona College where I studied under three fine professors, Dr. Donald Zenger, Dr. D.B. McIntyre, and Dr. A.K. Baird. I did my senior thesis with Dr. Baird. He passed away a number of years ago, far too young, but he did a great deal of research on the Southern California Batholith, and worked with Mars Viking Project in the 1970's.
To the best of my knowledge, Dr. Baird studied at Pomona College under the guidance of Dr. A.O. "Woody" Woodford (1890-1990), who founded the department in 1922, and taught geology to the likes of Roger Revelle (mentioned in "Inconvenient Truth" for his global warming work; Revelle College at UCSD is named for him), Charles Anderson (former chief geologist of the U.S. Geological Survey), Mason Hill (San Andreas fault and oil on the north slope of Alaska), Rollin Eckis (geologist and former chairman of ARCO), and John Shelton, along with many, many others. Woody maintained an office at Pomona College after his retirement in 1955, and continued his research through the 1980's. He was a familiar sight in the halls when I was a student there.
Along with his other professors, Woody studied at U.C. Berkeley under Andrew C. Lawson (1861-1952), a giant in the history of geologic research in both the Canadian Shield and in California. Lawson designed much of the geology program at Berkeley, and made many pioneering studies in the Coast Ranges and Sierra Nevada, and was the chairman of the State Earthquake Investigation Commission that produced the pivotal report on the great 1906 San Francisco Earthquake.
Andrew came to Berkeley at the invitation of Joseph LeConte (1823-1901), who was the first geologist there. He is known for many contributions to the field of paleontology, but he is perhaps best known today for his explorations of the Sierra Nevada, and his association with John Muir and the founding of the Sierra Club.
While at Harvard University, LeConte studied under Louis Agassiz (1807-1873), who is well known for his work in paleontology, but is celebrated in geology because of his research in glaciology, and his proposal that northern Europe and North America had once been covered by thick blankets of ice.

Agassiz was introduced to geology by Alexander von Humboldt (1768-1859) and to zoology by Georges Cuvier (1769-1832). Humboldt traveled widely, especially in South America and Europe, and originally proposed the Jurassic as a name for Mesozoic period represented by limestones in the Jura Mountains. He was one of the first to suggest that Africa and South America might have been connected to each other in the past.

Baron Georges Léopold Chrétien Frédéric Dagobert Cuvier was one of the earliest paleontologists and was one of the first to recognize that extinctions had taken place in the Earth's past. He was also a pioneer in the field of comparative anatomy. He is also famous for his belief in catastrophism, which stood in contrast to uniformitarianism, one of the guiding principles of science today.

So there it is...a series of connections that reaches back two centuries that led to a lanky slacker at Pomona College who later lucked into being a teacher at a modest community college in central California. It is not the lineage that leads to inspiration, of course. The teacher who gave me the desire to know more about the earth more than any other didn't have a lineage that I can track down on the internet, but I know he loved the science and inspired many of us to become geologists. He's in the picture above, but I haven't asked his permission to give his name, so I won't, but I want to thank him for his contribution to the field, and to let him know that I hope to carry on his tradition of excellence in my own career.
Posted by Garry Hayes at 4:31 PM