Time Beyond Imagining - A Brief History of the Colorado Plateau: Into the Triassic 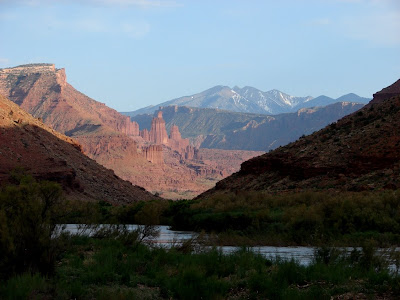 The first period in the Mesozoic Era is the Triassic, which lasted from about 245 to around 200 million years ago. The world's continents had been combined into the supercontinent Pangea, and the biosphere had just been subjected to the worst extinction event ever recorded in earth history, with something like 95% of all species wiped out. It is as if the world were starting over, with a new cast of characters, and new landscapes. In the Colorado Plateau region, two formations were laid down: the Moenkopi Formation, and the Chinle Formation.

The Moenkopi was formed in river floodplains and shallow lakes, the shales and sandstones stained bright red by iron oxides. Distinctive ripplemarks, channel deposits, and mud cracks attest that the environment was in turns wet and dry, under either arid or subtropical conditions. The source of the sediments was from mountains far to the southeast, sloping towards a northwest shoreline near present-day Nevada and western Utah. Numerous trackways attest to the presence of numerous small reptiles and amphibians, but bones are rarely preserved. Great places to see the Moenkope? Try the western and southern part of Zion National Park, the basal cliffs of Capitol Reef National Park, at Cliff Dwellers near the Navajo Bridge downstream of Glen Canyon Dam, the region near Tuba City and Moenkopi, and along the Colorado River near Moab, Utah, which is the subject of today's photograph.

I am kind of cheating with today's picture. It shows the Fisher Towers along the Colorado River near Moab, Utah, along Highway 128. The La Sal Mountains form the backdrop. The Moenkopi Formation is in fact visible in the picture, but only as the darker tops of the towers, and the red slopes to the left. I consider this road to be one of the most spectacular drives in North America, especially in the evening light. I just happen to really love the picture and was looking for an excuse, any excuse, to use it!
Posted by Garry Hayes at 11:46 PM

This is a great photo of Fisher Towers, also one of my favorite places - a good place to stop if you're traveling I-70. A fine excuse to use this photo!

I'm wondering, if it's just the tops of the towers and above that are the Moenkopi, what are the towers in? I didn't think it was Kaibab? Something else?

The underlying rocks are the Cutler Group. The Kaibab would be there except that the shoreline was just to the west near Canyonlands, and the white sands and limestone pinch out there.