Death Valley - A land of many treasures 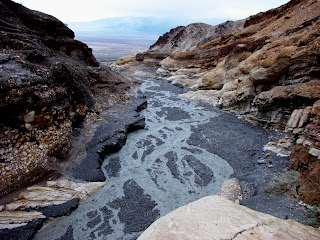 And very few of the treasures are of the monetary kind. Mosaic Canyon, at the north end of the Panamint Mountains is a treasure trove of learning opportunities at all levels. In the picture above, students witnessed a rare sight of flowing water in a desert wash (after an overnight soaking in our campsite; no one really cared, it was the last day). We could watch the pebbles rolling down the channel, and it was easy to imagine one of the large flash floods that have carved the intricate narrows just upstream.

The canyon walls are adorned with the "mosaics", chunks of yellow dolomite marble that were once cobbles in the stream bed. They were later cemented, and then eroded by later floods. Understanding their origin was the goal of the student projects while they wandered up-canyon.

The canyon lies at the edge of a metamorphic core complex, Tucki Mountain, and numerous faults are visible on the walk up the canyon, including one of the sweetest pictures of a normal fault one could ask for. 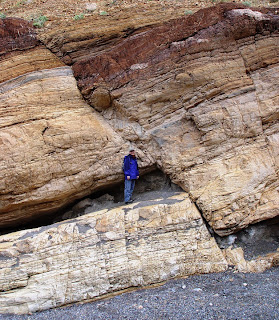 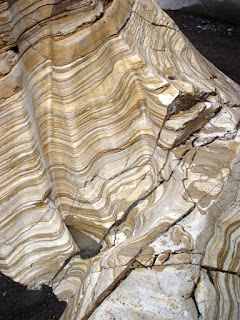 I visited here on a field trip from Santa Monica College. I don't remember this gorgeous part. Makes me want to go back. I wish I could find out about your upcoming field trips, always wanted to visit the Burgess shale. How awesome that you got to take your class. I live in SoCAL, but would love to find out about possibly joining one of your classes to go out in the field.
Sincerely, Stephanie Darling

Thanks for your comment. You can check the course offerings online for MJC, but I would also bet that some of the colleges closer to you have similar classes. I modeled my course after those offered at Santa Barbara City College, for instance.