The Sequoia Underground: An Exploration of Crystal Cave 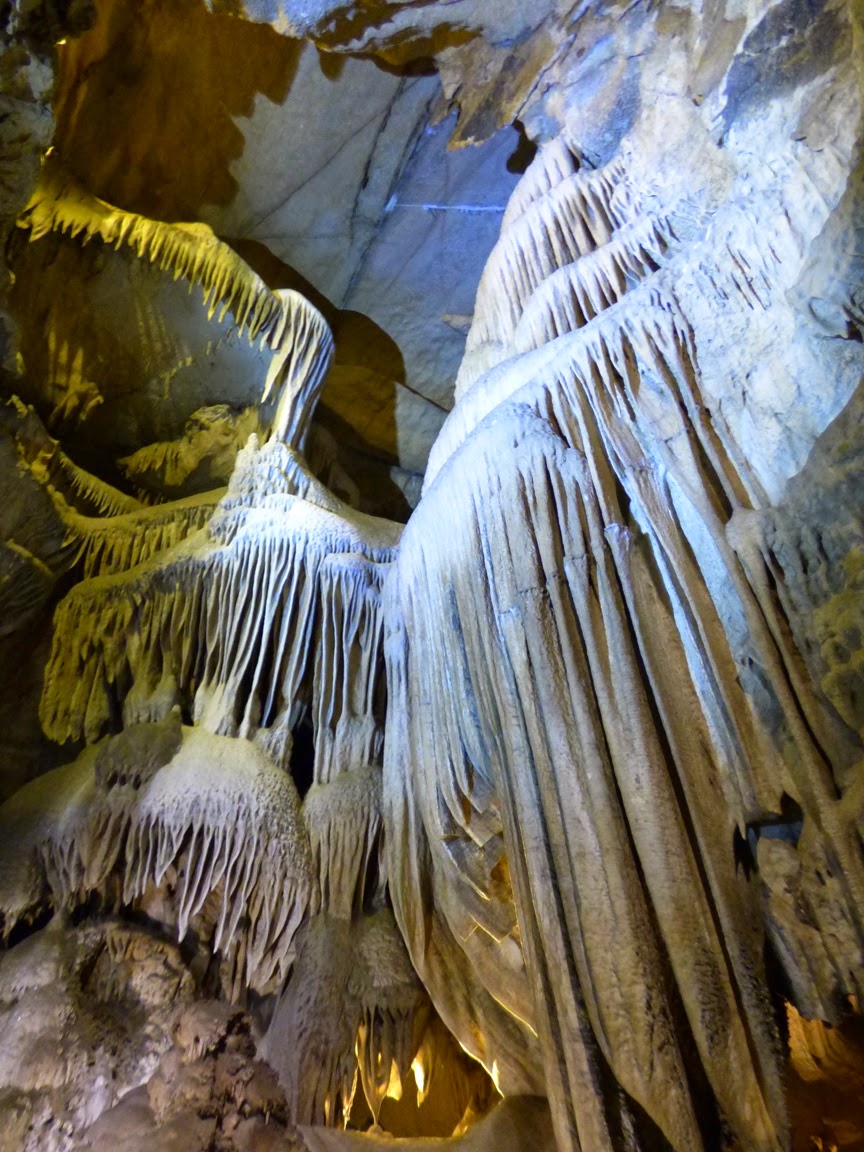 It's true that Crystal Cave in Sequoia National Park can hardly be described as a wild cave. Since its discovery in 1918 and its development as a park attraction in 1940, the cave has been visited by more than a million people. Dynamite was used by workers to widen passageways, and besides the lighting and pathways, there was a generator, and underground bathrooms. And yet there is still something wild about the cavern. Because it was discovered by park personnel and protected from vandalism from the beginning, the cave presents some wonderful examples of speleothems (cave decorations). The cave has a total of 2.42 miles of passageways (the third largest in California), but only a fraction ever receives visitors. The rest remains an underground wilderness. 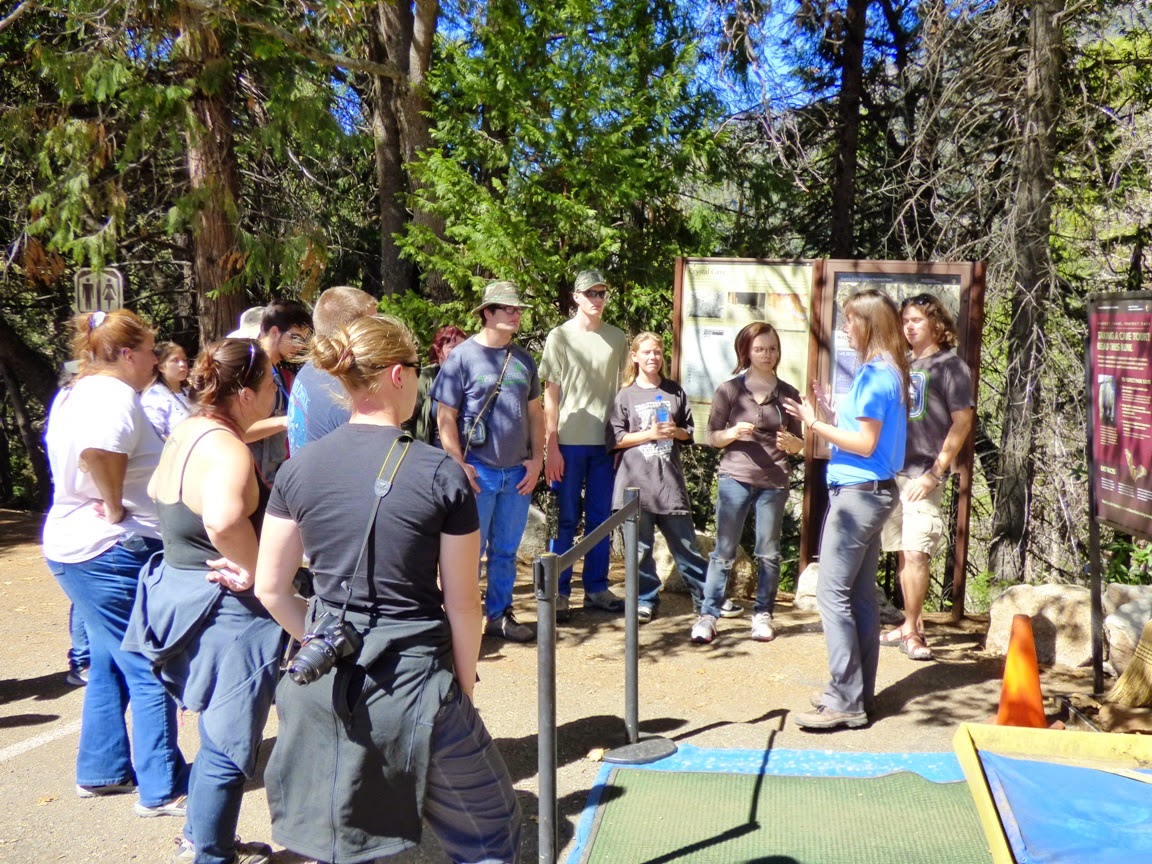 The cave is an integral part of our field studies course on the geology of Sequoia and Kings Canyon National Parks. We paid a visit this last weekend and made the cave our first stop. Our tour began with an orientation on White-nose Syndrome (a fungus that kills bats), and sterilized our shoes. We then started down the half mile trail to the cave entrance. 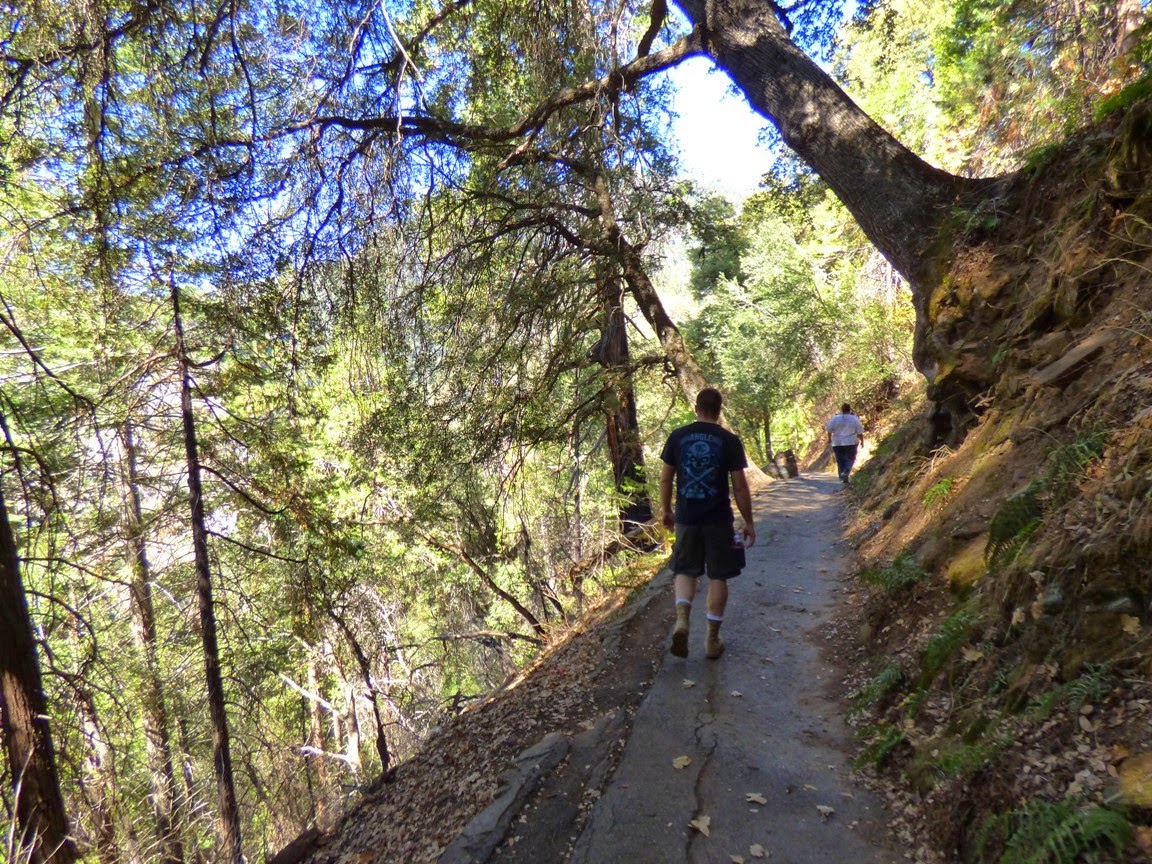 The trail itself is a pleasure, and a good introduction to the local geology. The rocks are part of the Kings Terrane, a group of metamorphic rocks that formed in a shallow marine setting in Triassic and Jurassic time (around 200-150 million years ago) with some parts possibly older. The rocks formed in the Pacific Ocean and were accreted to the western edge of the North American continent as the mass of continental crust entered into the vast subduction zone that was consuming the ocean crust. The collision and subsequent invasion of the rock by molten granite caused the silt, sand and lime mud to become schist, quartzite and marble. It is in the marble that we find the caverns forming. 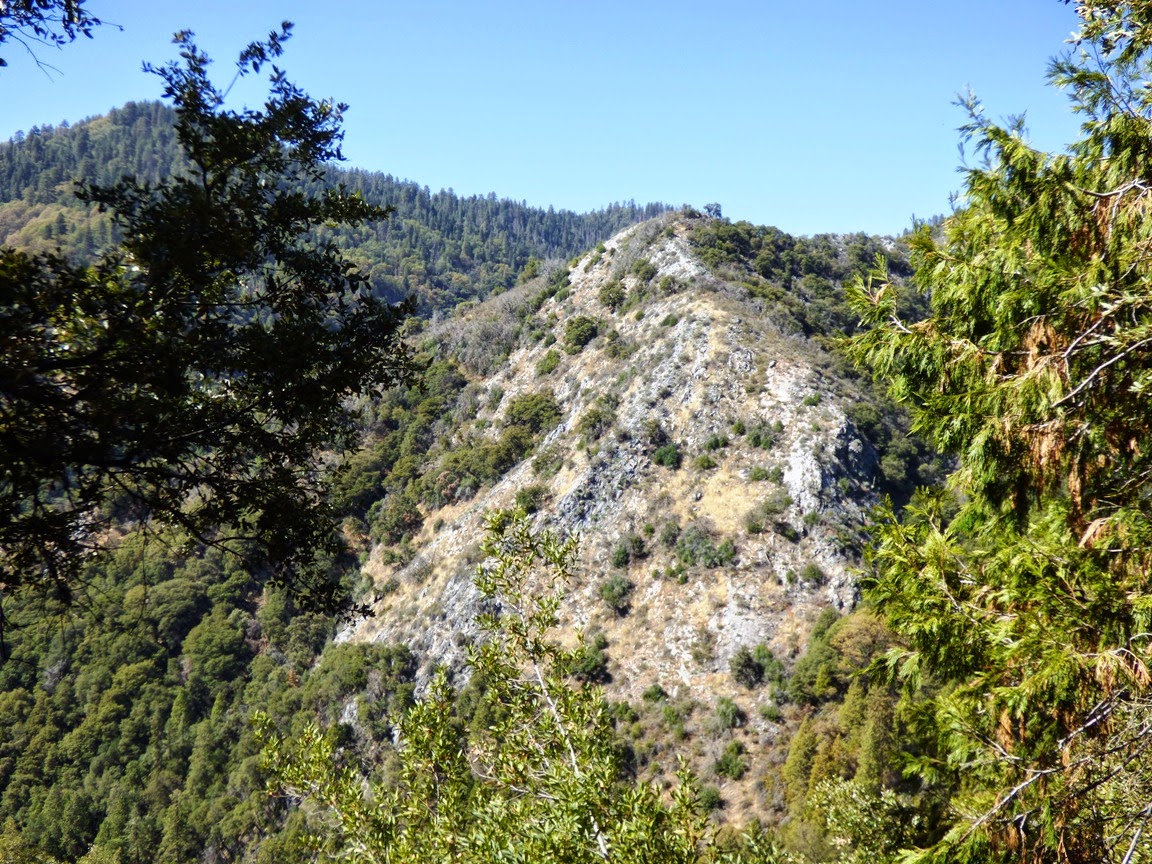 The trail provides a nice view of the marble cliffs. Permanent springs cause Cascade Creek to flow year round, providing a cool stretch of trail on a hot day and some beautiful small waterfalls. 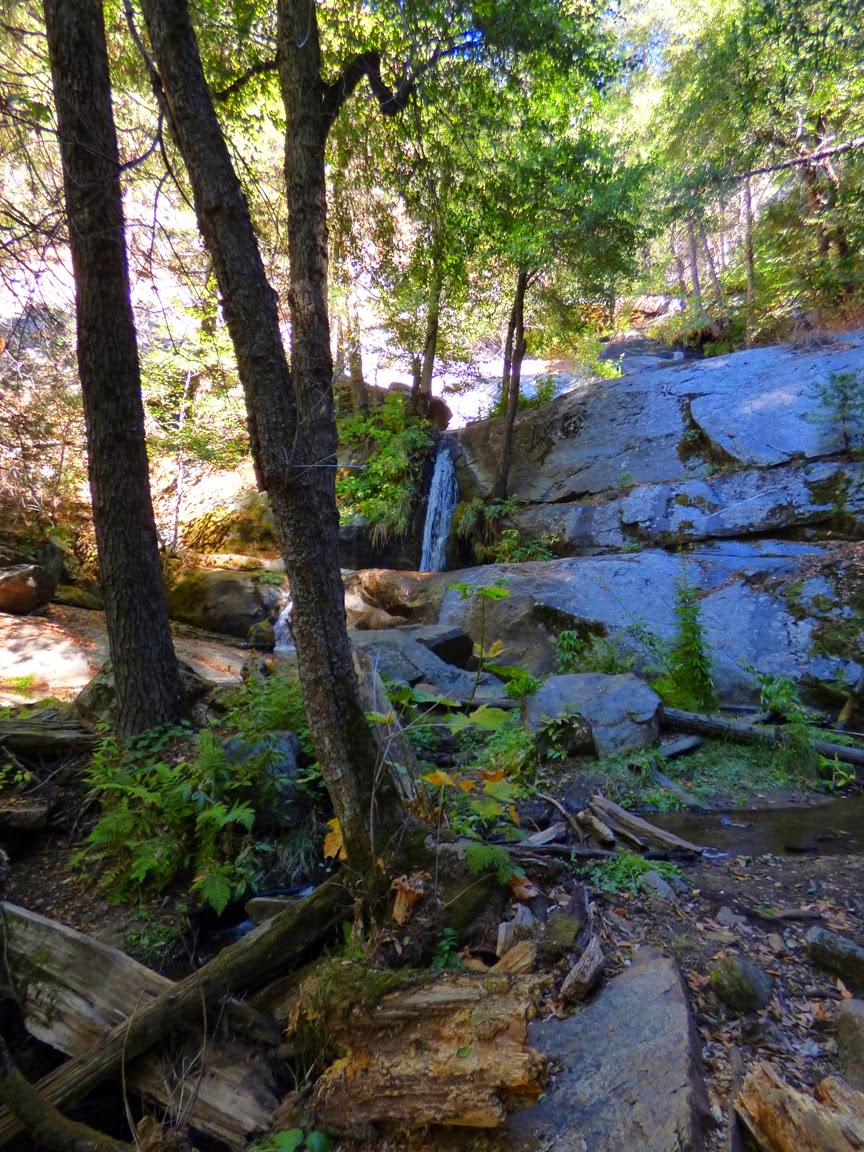 Soon we reached the entrance to the cave and met our guide. The cave is administered by the Sequoia Natural History Association and is generally open for tours from the early spring to late fall. 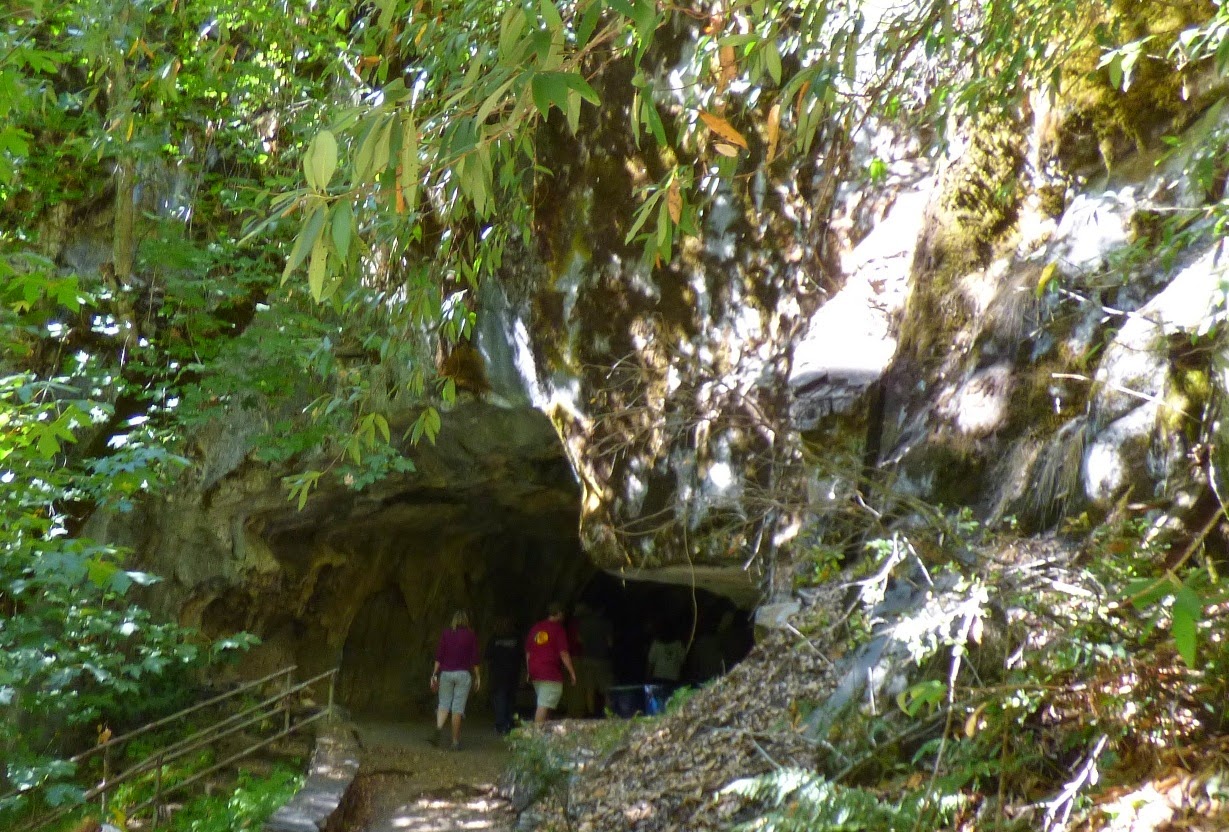 A cool breeze was blowing out of the cave. The temperature is controlled by the average year-round climate, so the cave is relatively cooler in summer, and warmer in winter. Although the darkness of the cave provides little in the way of food, a number of animals do live in the cave, including a number of species of bat, and small arthropods like spiders, isopods and pseudoscorpions.

Entry into the cave is controlled by the famous spider-web gateway. I remember vividly seeing that gate when I visited the park for the first time as a child in the 1960s, and I remember the gate (and the underground bathrooms) the best. 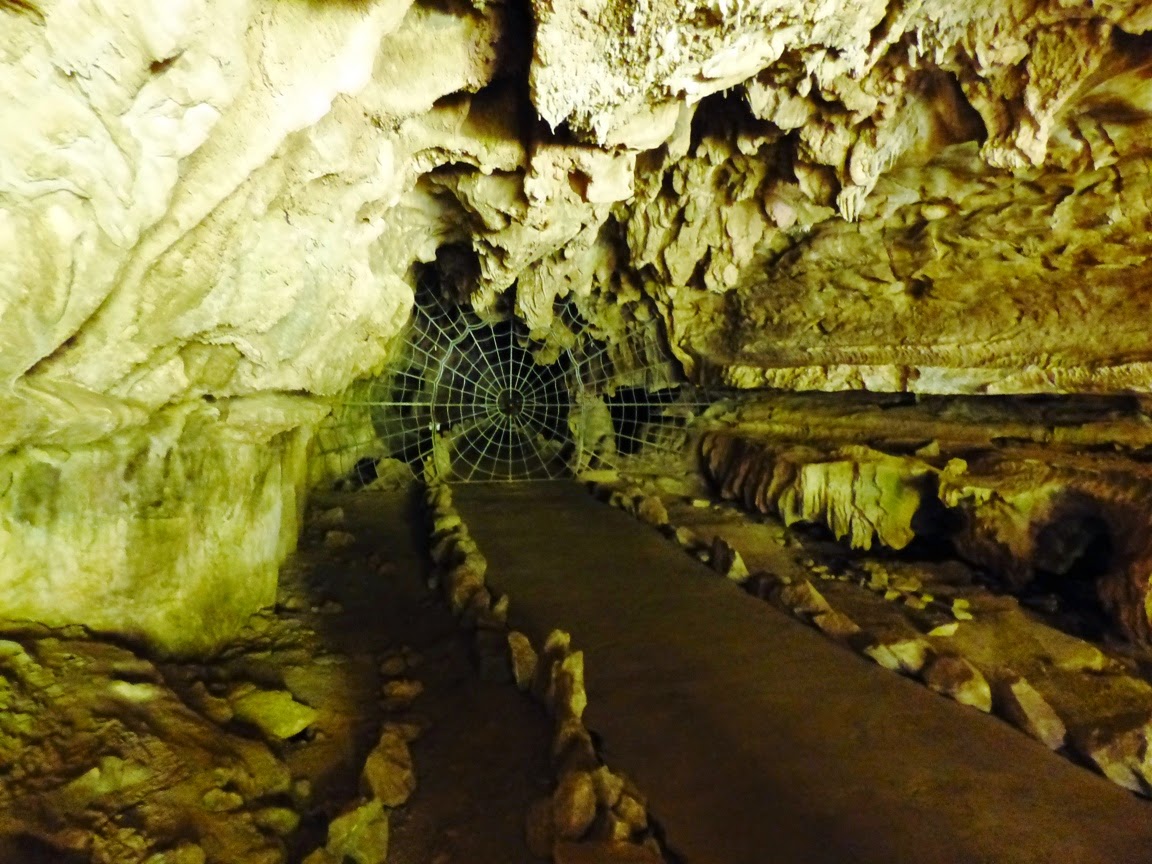 Given the number of visitors, it's amazing that any cave decorations are left. It's to the credit of the park service and history association workers that so little damage has been done, although plenty of bad things have happened (the park service actually allowed self-guided tours for a brief time with disastrous results). The improvements to the pathway have actually meant that some of the stalactites and stalagmites have begun healing from previous damage, as evidenced by the pure white calcite on some surfaces. Dust from tramping feet and smoke from torches left many features a dingy yellow or brown color. 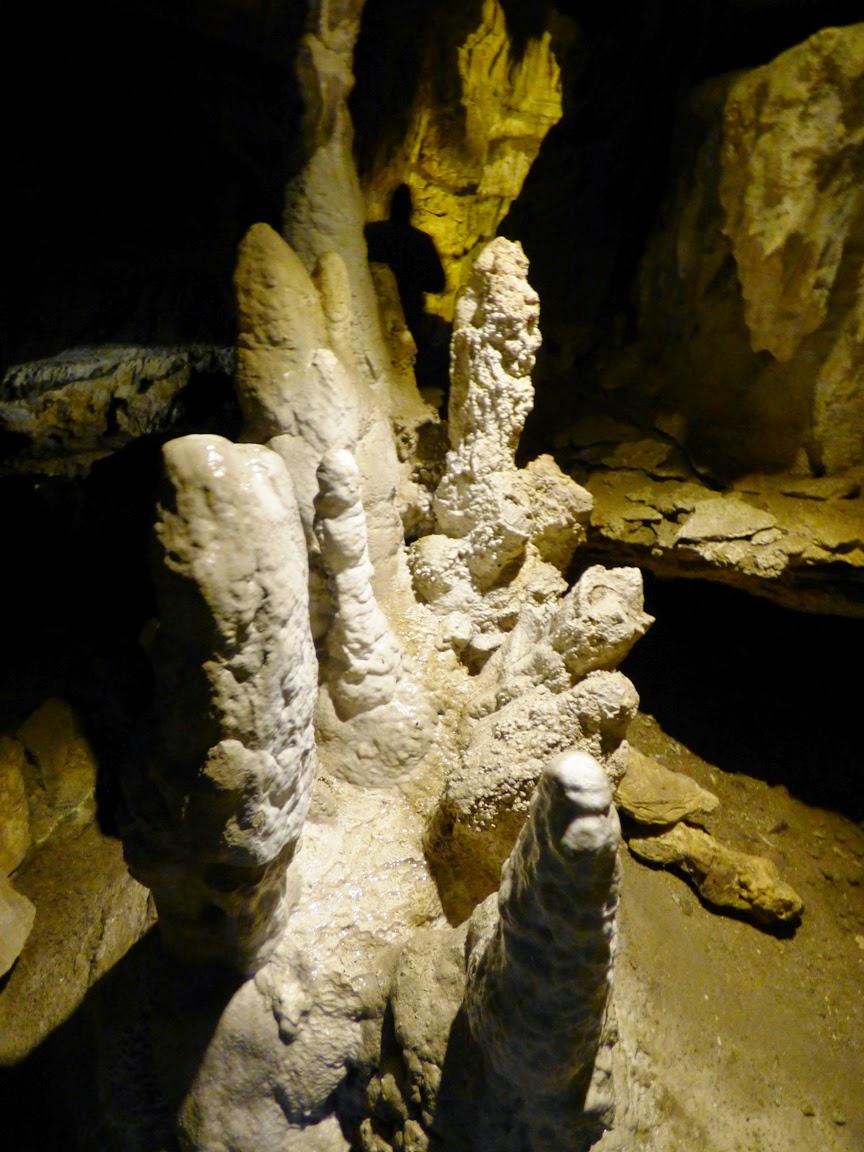 We passed some beautiful stalagmites on the floor of the cave, and then moved into the Junction Room, which was filled with the sound of babbling little brook. The cave is still very active, as it diverts a nearby creek underground. There are several levels to the cave, developed as the local canyons outside have gotten deeper, causing the rivers inside the cave to erode downward. There are numerous benches and terraces attesting to the former presence of higher level streams. 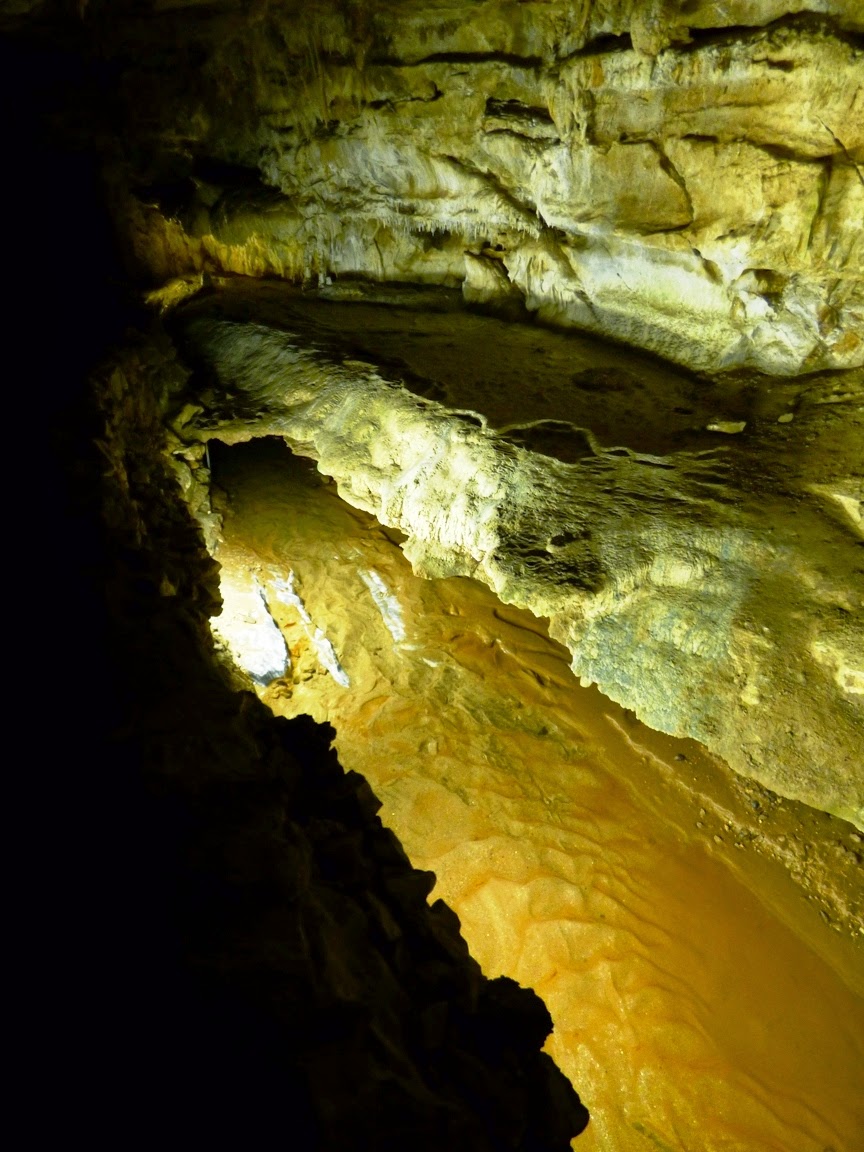 We moved through the Curtain Room, where a profusion of cave curtains and draperies hang from the walls and ceiling of the cave. They are out of reach of vandals and are thus largely unbroken. 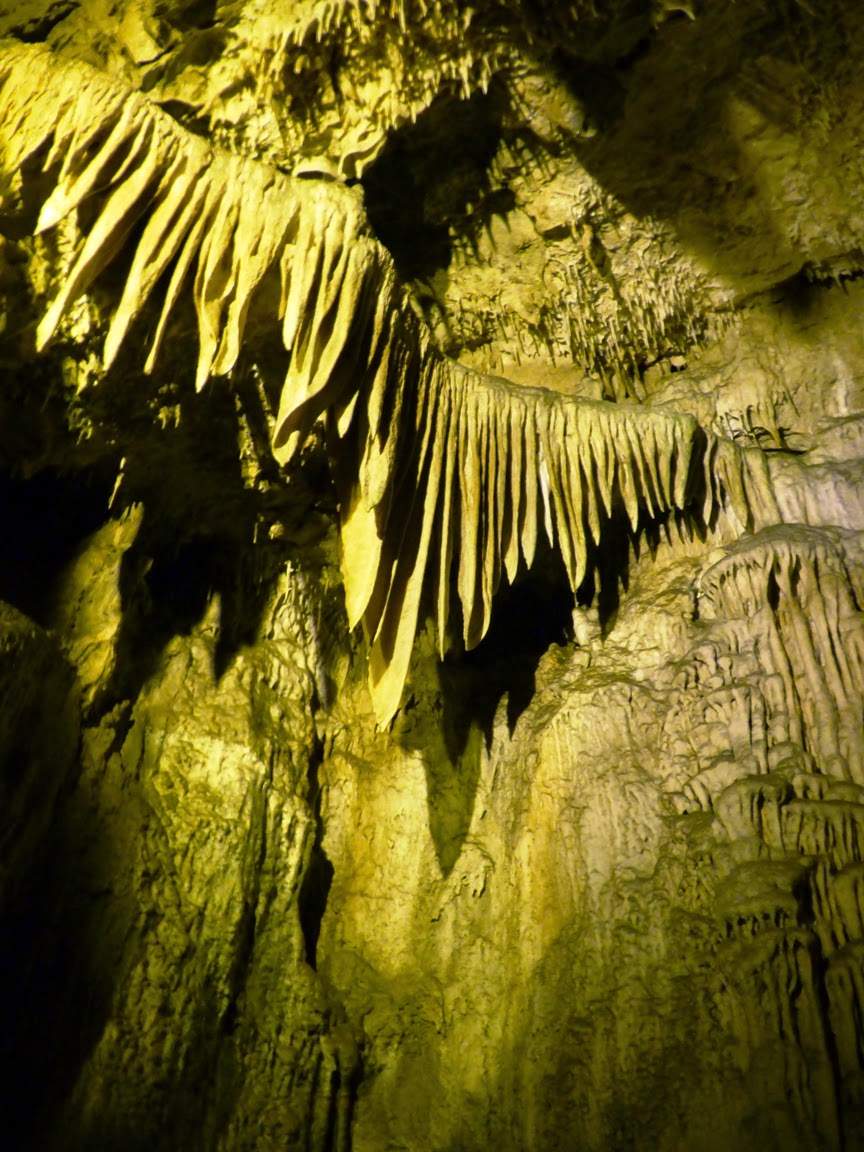 The Dome Room contains one of the cavern's most famous features, the Fairy Pools. The rimstone pools and soda straws are actively forming (and recovering slowly from vandalism). 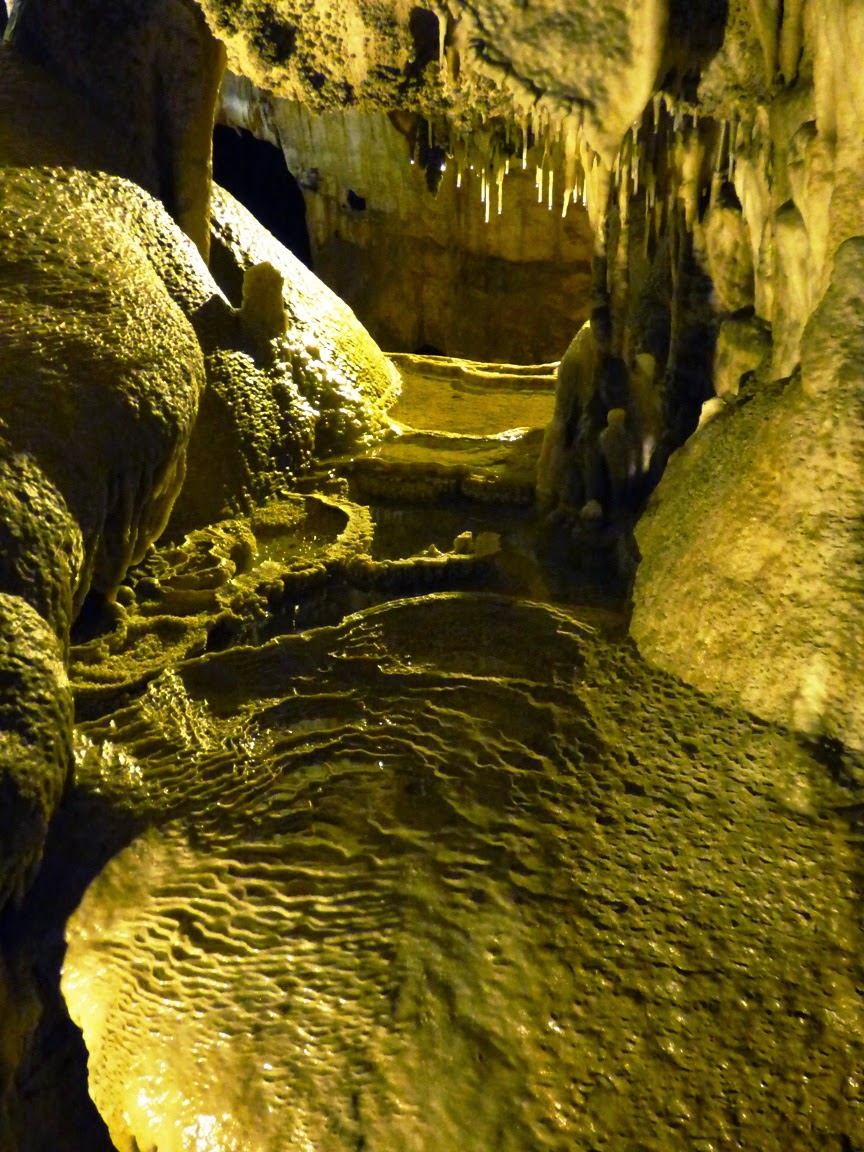 A zoom onto the soda straws (below) shows the water droplets on the ends. In these conditions, soda straws can grow at maybe an inch per century. 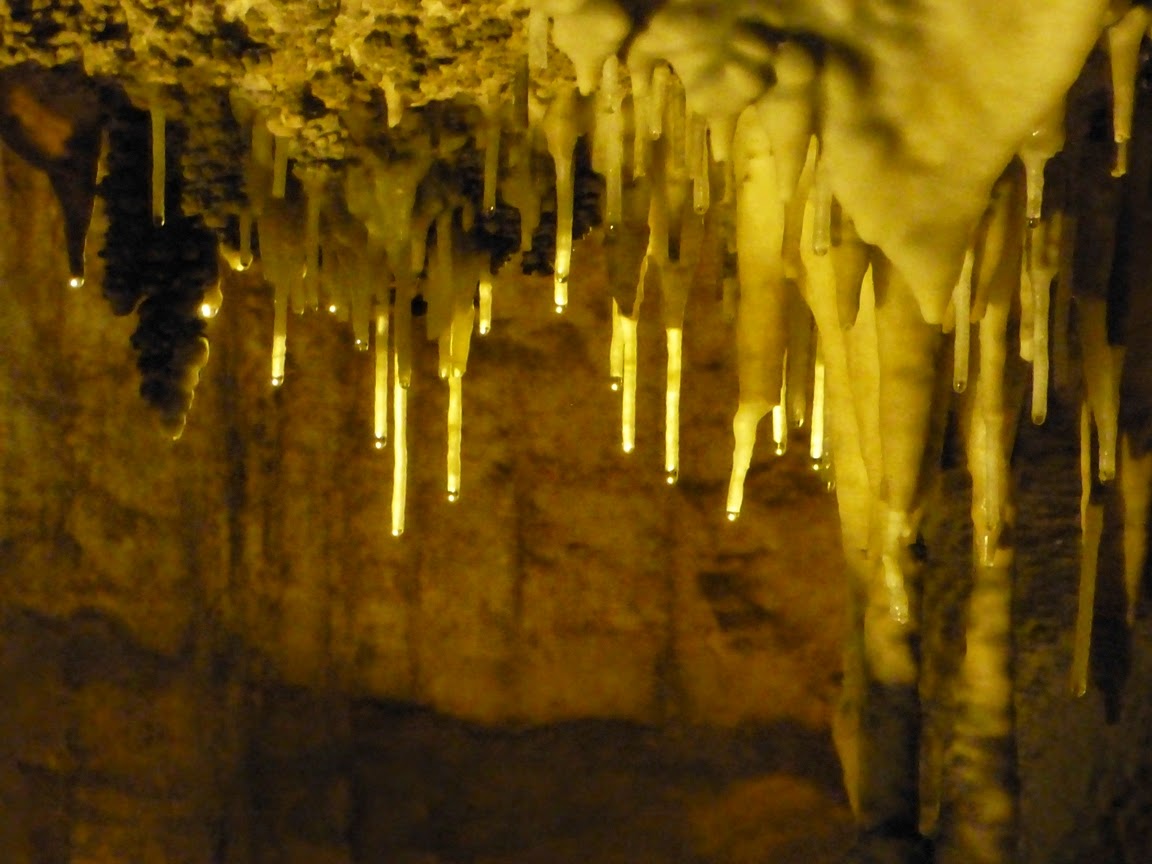 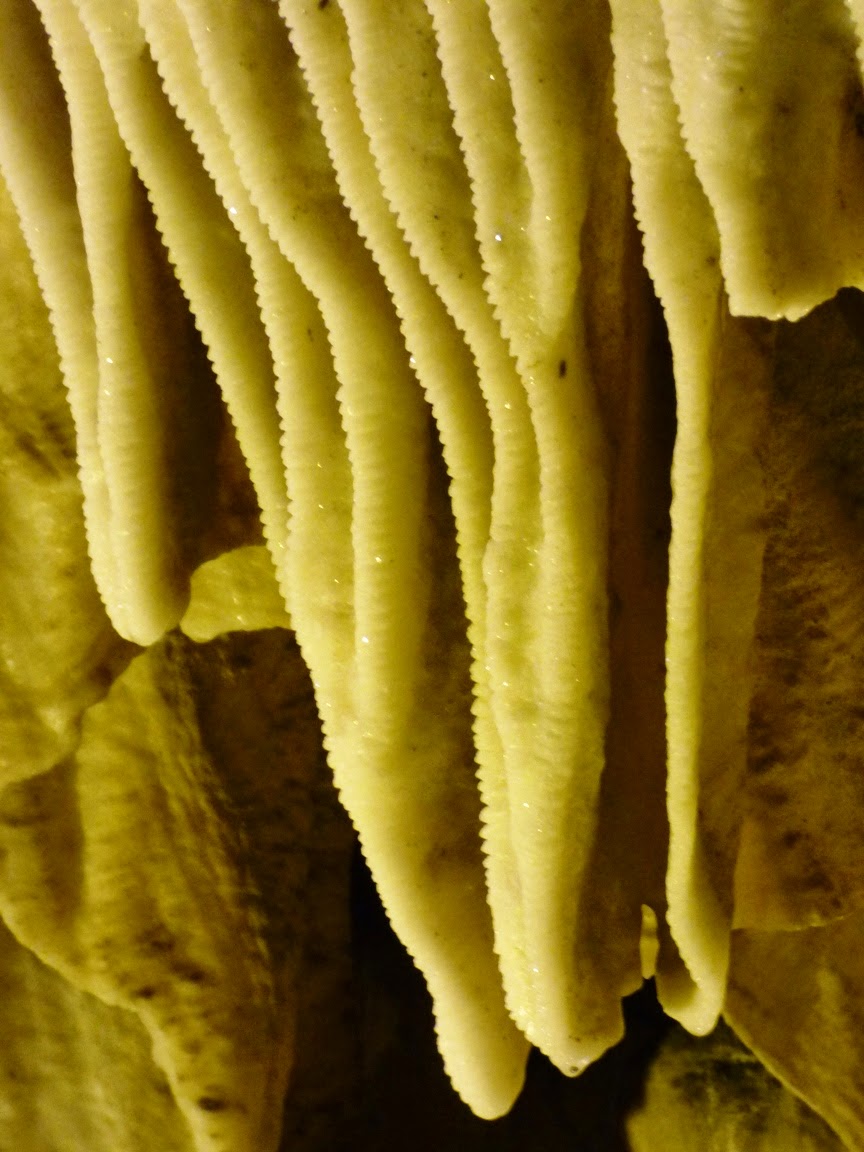 The Marble Room is the largest in the cave, extending for more than 100 feet, with the ceiling 30 feet above. It is an amazing sight. It's also where they turn out the lights and let explorers get a feel for total darkness. Some people really don't like the sensation. 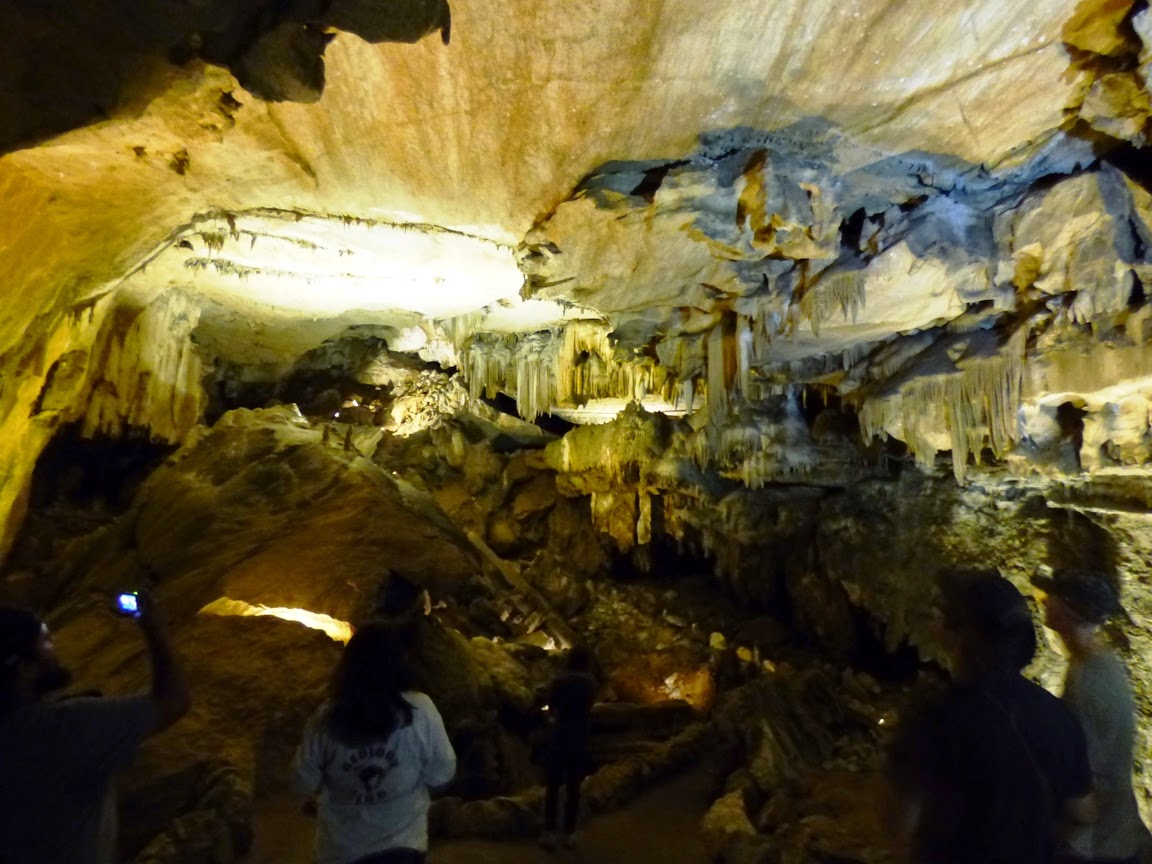 There are nearly 300 known caverns in Sequoia and Kings Canyon National Parks (Boyden Cave, another developed cave, is just outside the park boundary). The caverns include Lilburn Cave, which at 28 miles of passageways is in the top twenty of the largest caves in the nation. Most of the wild caves are remote, and their locations are kept secret for obvious reasons. Clough Cave was known a century ago as a beautiful cave festooned with thousands of stalactites. When the cave was publicized, the speleothems started to disappear, and today Clough Cave is pretty much a featureless hole in the ground. Several vandals were caught by park rangers in 1997 stealing some of the last artifacts in the cave. What a crying shame.

In the meantime, if you ever visit Sequoia or Kings Canyon, be sure to give the cavern a look. You won't regret it!
Posted by Garry Hayes at 12:24 AM

Great Post! I was fortunate enough to visit this cave in 2011. Your pictures came out far better than my camera phone could take in the cave :/

Crystal Cave has been on my list for years. Nice to see so many formations untouched.