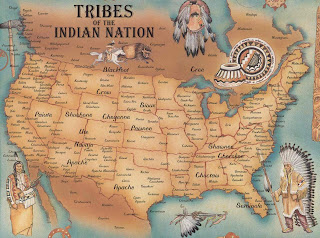 This picture and the "Cancel Columbus Day" caption landed in my facebook account, and I think it is a great sentiment. I agree there are better things to celebrate...not only was it the start of the near-extermination of a continent full of people who had already "discovered" the land, but the guy was on a commercial venture. The holiday is an outmoded tradition that is meaningless to most people, and grossly insulting to many people. One could argue that we need a holiday for many reasons: religious beliefs account for a few (which also celebrates one group over another), and important national events are another (we celebrate Memorial Day so we can thank our family members and friends who served in the military). And in a capitalist country that has come to dishonor the workers who make the oligarchy rich, we still hang on to Labor Day. We remember the birthdays of people who brought out the best of our country: Washington, Lincoln, and Martin Luther King. I find this appropriate. 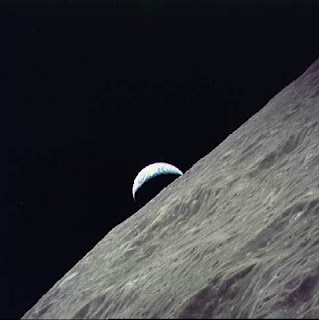 How about celebrating a true moment of national exploration? One that changed everyone's perception of the planet? It seems to me that if this country values science and technology as an accomplishment of the human spirit; conquering disease, improving standards of living, and journeying where no one has gone before, then we should have a day that celebrates our nation's greatest scientific adventure. My thought is that we should set aside the day we landed on the moon in 1969. Our country set a communal goal with JFK's speech at the beginning of his presidency, and against huge odds we succeeded. Admittedly, the race to the moon involved trying to outdo the USSR, but I doubt that fighting communism was the foremost thought of the scientists and engineers who got us onto our planetary neighbor. And the effort resulted in vast advances in science across many fronts (not the least of which was geology).

I don't care much for Columbus. We should be celebrating something truly meaningful, and I think science should have such a day. What do you think?
Posted by Garry Hayes at 4:21 PM

Another excellent post. I consider C-day a bogus federal holiday. BTW - Is it celebrated on Hispaniola?

In most Latin American countries it's become Dia de la Raza, which instead celebrates the modern mixed heritage people.

The State of South Dakota does not celebrate "Columbus Day", but passed state mandate to declare that day as "Native American Day".

Also, what the heck are we celebrating anyway? According to Wikipedia's list of common misconceptions: (1) Columbus did not set foot on the North American continent on Oct 12, but on the Caribbean Islands; and (2) throughout his life, he continued to believe what he visited was India. (http://en.wikipedia.org/wiki/List_of_common_misconceptions#History)

I don't really see Columbus as particularly positive. He represents the beginning of hundreds of years of genocide and persecution for native peoples. Seriously, what did he really discover? People were already there. We need to shed this Eurocentric view of the universe.