In the far northwestern corner of California beyond Eureka and Arcata, the coast is lonely and wild, but there is one outpost of civilization, the small village of Crescent City. There are around 7,000 people, a small harbor with a fishing fleet, and a beautiful lighthouse, constructed in 1856 for pretty good reasons. The region around the harbor is peppered with dozens of jagged rocks called sea stacks (see the photo below). The town is a crossroads of sorts, with highways connecting with Grants Pass and Brookings in Oregon, and Redding and Eureka in California. 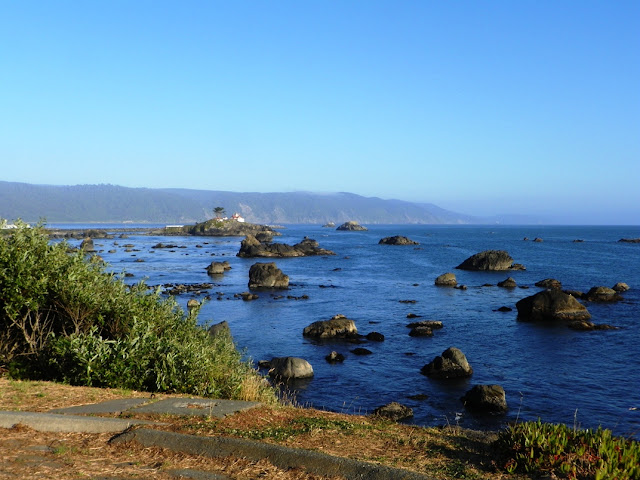 It's also been described as a tsunami magnet.

Since 1933, tidal gauges in the harbor have detected at least 32 tsunami surges, five of which caused damage, and two that have caused deaths. The 1964 magnitude 9.2 Alaska earthquake caused catastrophic damage in the town, killing eleven people. And ominously, sediments in and near the town record evidence of damage from the 1700 Cascadia earthquake. It is the possible repeat of that event that has the Pacific Northwest in an uproar at the moment.

No other place in California has such a record. The most recent tsunami was caused by the 2011 Tōhoku quake in Japan, a magnitude 9 event. The wave surged into the harbor, reaching a height of 8 feet (2.4 meters). Five people (I assume they were tsunami tsight-tseeing) were swept out to sea, and one of them drowned. 35 boats were destroyed. Tens of millions of dollars have since been spent to better prepare the harbor for future events.
It may seem strange that one particular spot should be the focal point of tsunami damage in the state. The intensity of a tsunami depends on many factors, including the distance and size of the earthquake, the depth and shape of the seafloor, and the arrangement of human developments in the coastal area. Tsunamis have been recorded in other parts of California, but offshore islands in southern California protect the shorelines to an extent. Monterey and Santa Cruz have configurations that seem to have provided some insulation from the worst of the waves. But Crescent City collects tsunami energy. The good news is that the city seems to take the threat seriously, a fact reported to me by a cherished relative who lived in the danger zone there for many years (she lives further from the coast these days, and I've noted there is a closet of emergency supplies in the hallway outside her room in the assisted-living facility). They've learned from the past, and seem to have prepared for the future.
What is it like to be in the midst of a huge tsunami? In 1964 quake, four waves struck Crescent City. The first three were not as damaging, so some people returned to the downtown area only to be overwhelmed by the larger fourth wave. It topped out at around 20 feet (6-7 meters). Eleven or twelve people were dead, 100 were injured, nearly 300 buildings destroyed or damaged, along with 1,000 cars. It's hard to imagine being in the middle of such an event, but the Battery Point Lighthouse keepers witnessed the event from an uncomfortable location. The waves surrounded their rocky point. Their story is recounted in the book The Raging Sea by Dennis Powers (2005):


The water withdrew as if someone had pulled the plug. It receded a distance of three-quarters of a mile from the shore. We were looking down, as though from a high mountain, into a black abyss. It was a mystical labyrinth of caves, canyons, basins, and pits, undreamed of in the wildest of fantasies.

The basin was sucked dry…In the distance, a black wall of water was rapidly building up, evidenced by a flash of white as the edge of the boiling and seething seawater reflected the moonlight.

Then the mammoth wall of water came barreling towards us. It was a terrifying mass, stretching up from the ocean floor and looking much higher than the island. Roxey shouted, “Let’s head for the tower!” - but it was too late. “Look out!” he yelled, and we both ducked as the water struck, split and swirled over both sides of the island. It struck with such force and speed that we felt we were being carried along with the ocean. It took several minutes before we realized that the island hadn’t moved.

When the tsunami assaulted the shore, it was like a violent explosion. A thunderous roar mingled with all the confusion. Everywhere we looked buildings, cars, lumber, and boats shifted around like crazy. The whole beachfront moved, changing before our very eyes. By this time, the fire had spread to the Texaco bulk tanks. They started exploding one after another, lighting up the sky. It was spectacular!

If there is a repeat of the magnitude 9 Cascadia earthquake of 1700, Crescent City will certainly be affected. How do we know? Hidden in some of the coastal flats are sand deposits from the 1700 event. In places the water rushed a mile inland. There is potential for greater damage because of the closer proximity of the epicenter, but that is mitigated by the expectation that the coastline could rise several feet during the quake, unlike areas farther north. They are are expected to sink before the arrival of the wave. 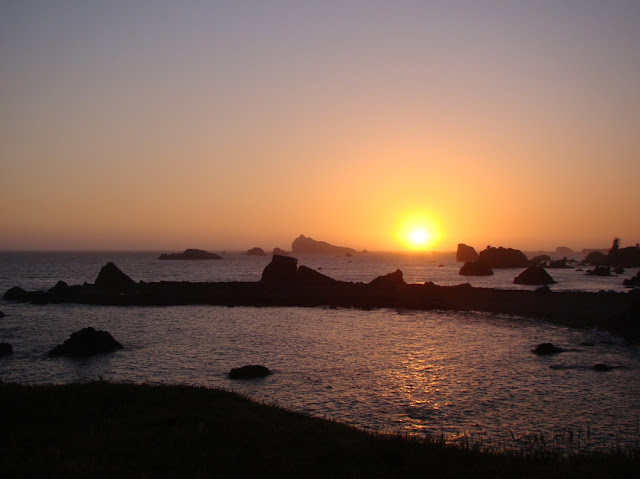 We visited our relative in Crescent City before continuing our Vagabonding on Dangerous Ground journey north on Highway 101. We were about to enter Oregon, and a beautiful stretch of coastline (as if it hadn't already been beautiful). 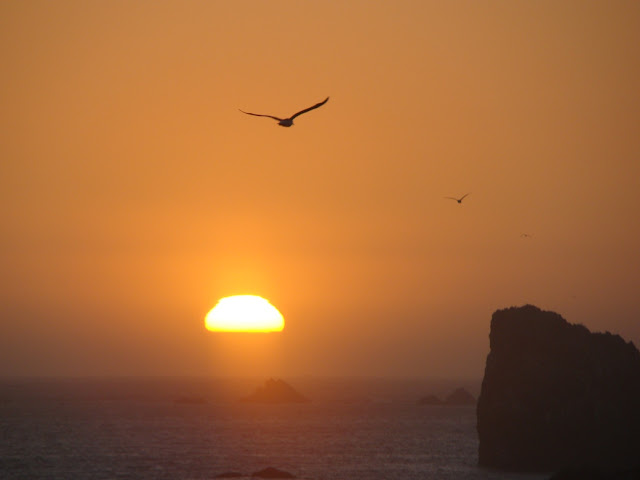