Vagabonding on Dangerous Ground: In This Land of the Sasquatch There are Ancient Giants 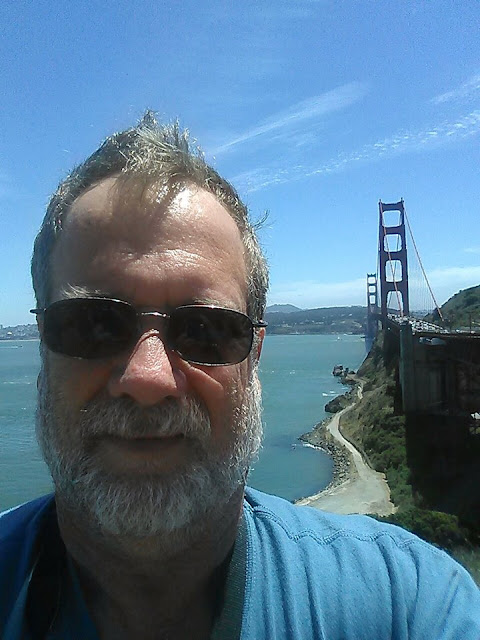 Yep, the first part of our journey into Dangerous Ground took us to the land of the Sasquatch, the legendary ape-human of the Pacific Northwest forests. That's not him in the picture above, although I could understand the misinterpretation. That's actually me taking a rare selfie at the Golden Gate Bridge. We were only an hour into our journey, and we had 200+ miles to go, but we couldn't resist being tourists for a moment. It was a wonderfully clear day in the Bay Area. 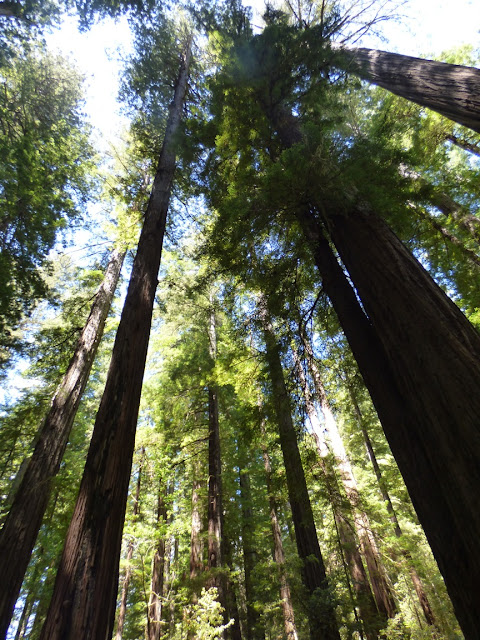 Our real goal was to reach a part of ancestral California, the Redwood forests. The original range of the trees extended from the Big Sur Coast to the Oregon border, but the wood is durable and therefore valuable. The forests were removed and only a few intact forests remain, with only about 5% of the old growth groves left. Thankfully they are mostly protected, but there is still a sense of great loss as we drive past mile upon mile of either barren slopes, or slopes covered with brush and sometimes young redwood trees. But often not. 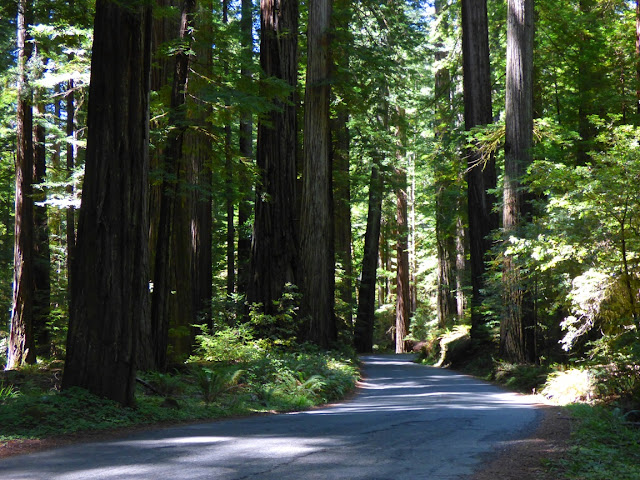 These trees are the tallest in the world. There are rumors from the past of 400 foot tall trees of other species, but the claims date from more than a century ago, and these supposedly huge trees were cut down. I don't know if loggers exaggerate any more than other workers, but who knows? I'm pretty skeptical of the claims, and they can't be tested. The tallest Redwood is 379 feet (115 meters), and it was discovered only in 2006. There may still be taller ones out there. 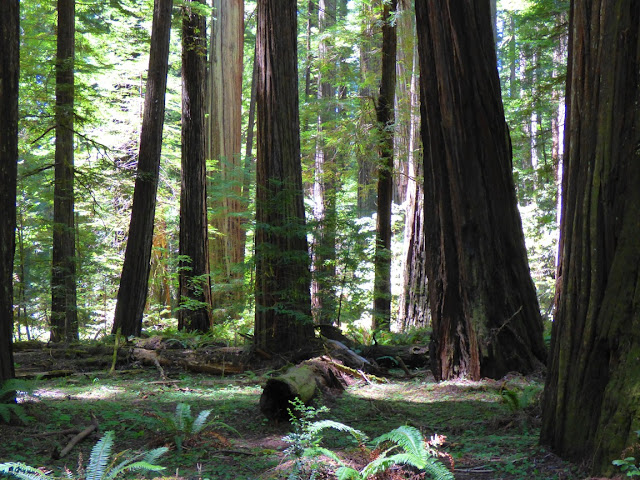 There is really nothing quite like wandering through a mature forest of Redwood trees. The sun may be shining, but the light at ground level is more of a diffuse emerald green. Once the sun gets low, the forest becomes gray, and then pitch-black. I have a hard time imagining orienteering in places like this. Landmarks can be hard to come by. 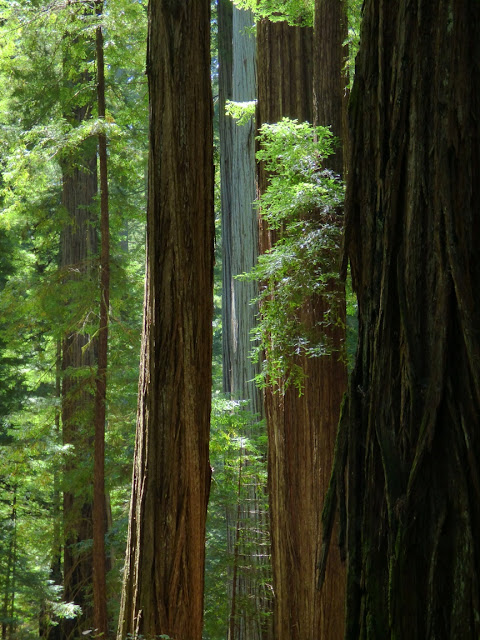 Because we were vagabonding, i.e. not really planning far ahead, we stayed at Humboldt Redwoods State Park only because I was able to score a late cancellation. We got two nights. We explored the old growth forest along Bull Creek, and had a close look at one of the truly giant trees, which is called (by some degree of coincidence) "Giant Tree". It's only 16 feet short of being the tallest tree in the world, at 363 feet (110.6 meters). It towered over us. 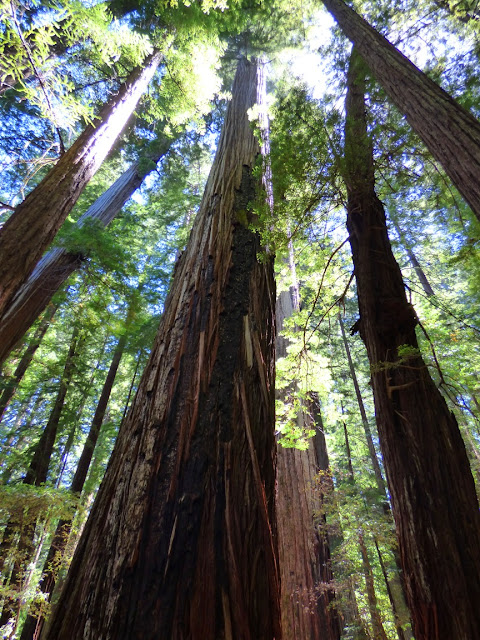 It was gigantic, but from the ground it was difficult to see how tall it really was. You can see it in the photo below, just a bit right of center. The picture was possible only because the tree was near the edge of the grove. If it were in the middle of the grove, we could have walked right past it without realizing how it towered above the other trees.

This new series is called "on dangerous ground", but in this instance the danger was more to the trees than to us. We were inland, far from the dangers of tsunamis, but not far enough inland to be threatened by volcanic eruptions in the Cascades. Giant earthquakes have no doubt knocked a few of these trees over, but some of these ancient giants have survived five or six of the magnitude 9 tremors that have shaken the region in the last 2,000 years. No, the real danger is us, and what we've done to this ancient forest. 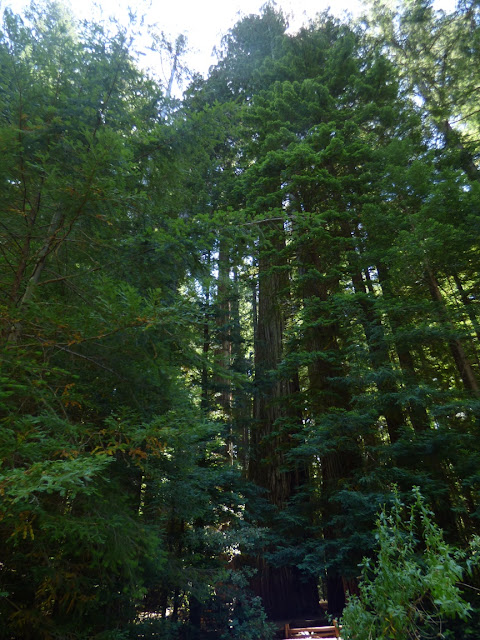 About that Sasquatch thing. Of course I believe that a race of gigantic ape-people have managed to survive and stay hidden in these deep forests, leaving behind no traces, no tools, and only revealing themselves to charlatans and book authors. Of course I believe. I also believe that the range of Sasquatch sightings happens to correspond pretty close to the range of the Black Bear, but no one could possibly mistake a seven-foot tall bear covered in dark fur in a dark forest with a seven-foot tall ape-human covered in dark fur in a dark forest. Especially if one believes hard enough.

But belief, no matter how fervently felt, doesn't prove much...
Posted by Garry Hayes at 9:30 PM