Is the Second Coming...Coming Because of an Earthquake in the Pacific Northwest?

Geotripper stands bravely on the coast of the Pacific Northwest, camera and binoculars in hand, ready to liveblog the end of the world during the apocalyptic earthquake that is going to happen SOON. Well, okay, I'm actually visiting with family, but if anything happens earthquake-wise, I will let you know.

I want to tread lightly here, because I'm not in the business of attacking anyone's religious beliefs. But I do want to provide some perspective to counter the kinds of headlines I've been seeing in the aftermath of an excellent piece in the New Yorker (please click here to read it; it's worth your time) concerning the potential for a large earthquake in the Pacific Northwest, one which will cause catastrophic damage to the infrastructure of the region and possibly kill 16,000 or 17,000 people.

I get a bit tired of the predictable hype that follows such viral stories. The idea that the Pacific Northwest will "be destroyed" by the earthquake feeds into the fears of people who have been reading too many headlines like this one:

It's a real headline from the internet, but you'll have to Google it. I don't want to provide them with any more publicity than they've already gotten with their irresponsible hyperbole (and just how did FOX news end up in that title?).
Here's the thing. This earthquake, should it happen in our lifetime, will be a horrible catastrophic event. But it will also be a natural event that is predictable with certain limits, follows the natural rules of physics and geology, and has happened numerous times in the past, most notably in the year 1700. Our understanding of the dynamics of this potential earthquake is one of the great detective stories in the science of geology, as the New Yorker article points out.
It is not some kind of supernatural event that is planned to herald the second coming of Christ. I arrive at this conclusion because it is arrogant for Americans to think that a natural disaster that happens to us and results from well-known geological processes is somehow different from other natural disasters that have happened elsewhere and will continue to happen long into the future. Let look at some examples of earthquakes in the past (source is from the US Geological Survey via Live Science).


The question I have for the hucksters and frauds on the internet and elsewhere: what gives you the right to decide that a particular earthquake is somehow a harbinger of the religious end of the world? People throughout history have found it far too convenient to blame natural disasters on the perceived moral failings of those who were most affected. It's not an old tribal thing either. Pat Robertson tried to blame the Haiti quake on the Haitians themselves. It's truly disgusting. 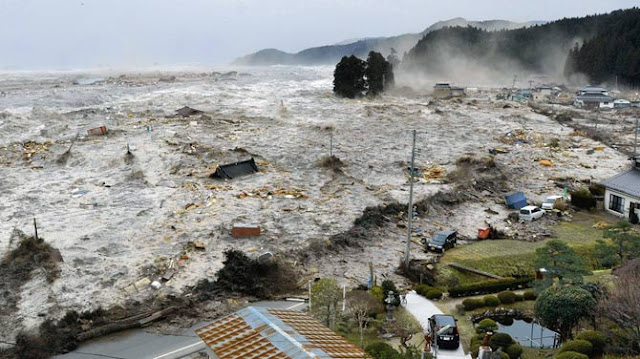 I suspect I'm mostly preaching to the choir here, to use a religious metaphor, but if you happen to have stumbled onto this site while tracking down biblical prophecies, please consider something as you do your research: If an event has happened many times before, is predicted by science to happen many times again, then it doesn't really fall into the realm of supernatural judgement. It's the Earth doing what it has been doing for a very long time. If the death tolls from natural disasters seem to be rising, it is because more and more people are being forced to live in ever more dangerous and marginal environments.

Just because bad things happen to human beings doesn't mean they are being punished by a capricious god. Earthquakes, tornadoes, hurricanes, tsunamis and other disasters are part of living on the Earth, and they happen to the good, the bad, and the ugly alike.
Posted by Garry Hayes at 10:47 PM