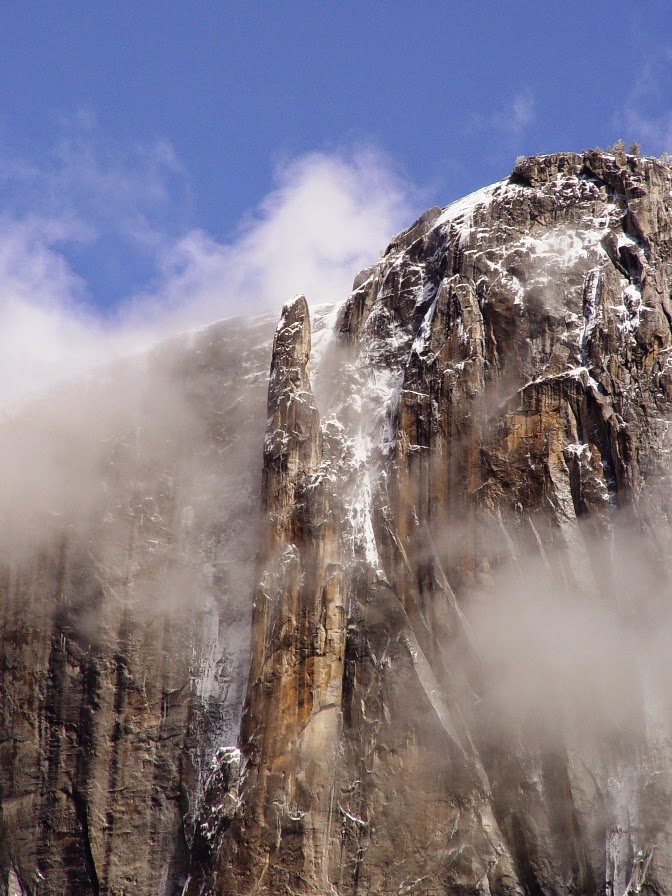 I've done a lot of traveling in the last month, from Arizona and back, to Pinnacles National Park, and then through Northern California to the Oregon Coast. In the blogging sense, I got distracted from a little mini-blog-series I was doing on Yosemite Valley, but today we're back among some of the most beautiful cliffs in the world.

There is a spire kind of hidden in plain view among the high precipices near Yosemite Falls, the Three Brothers and Yosemite Point. It's more prominent from some angles than others, but it helps if some clouds are pouring over the high cliffs, defining it. The spire is called the Lost Arrow. It formed in the El Capitan granite and Sentinel granodiorite where vertical joints have caused the rocks around the spire to fall away (joints are straight fractures in the rock caused by the release of pressure as the rocks are exposed by erosion).
As with many of the distinctive rocks of the valley, there is a Miwok legend told of it, not so much as its origin, but of an event to which it is related. As I read this narrative, I was struck by the sensitivity and heart of the story. It has a bit less of the fantastical mythological aspects that often accompany such stories, and thus in a way seems grounded in possible real events. In a biblical setting, this would be like comparing the narratives of Genesis floods and Egyptian Plagues with their apocalyptic themes to the later stories of King David and his relationships with Jonathan or Bathsheba. Or maybe the narratives concerning Ruth and Boaz.

We pick up the story as it is related by Galen Clark in The Indians of the Yosemite Valley and Vicinity (1904):


Tee-hee'-nay was a beautiful Ah-wah-nee maiden, said to be the most beautiful of her tribe, and she was beloved by Kos-su'-kah, a strong and valiant young brave. Valuable presents had been made to the bride's parents, and they had given their consent to an early marriage, which was to be celebrated by a great feast.

To provide an abundance of venison and other meat for this banquet, Kos-su'-kah gathered together his young companions and went into the mountains in search of game. In order that Tee-hee'-nay might know of his welfare and the success of the hunt, it was agreed between the lovers that at sunset Kos-su'-kah should go to the high rock to the east of Cho'-lack (Yosemite Falls), and should shoot an arrow into the Valley, to which should be attached a number of grouse feathers corresponding to the number of deer that had fallen before the skill of the hunters.

At the time appointed Tee-hee'-nay went near the foot of the great cliff and waited, with her eyes raised to the towering rocks above, hoping with her keen sight to see the form of her lover outlined against the sky, but no form could she see, and no arrow fell into the Valley. As darkness gathered, gloomy forebodings took possession of her, and she climbed part way up the canyon called Le-ham'-i-tee because the arrow-wood grew there, and finally she stood at the very foot of the rocky wall which rose to dizzy heights above her, and there she waited through the long night. 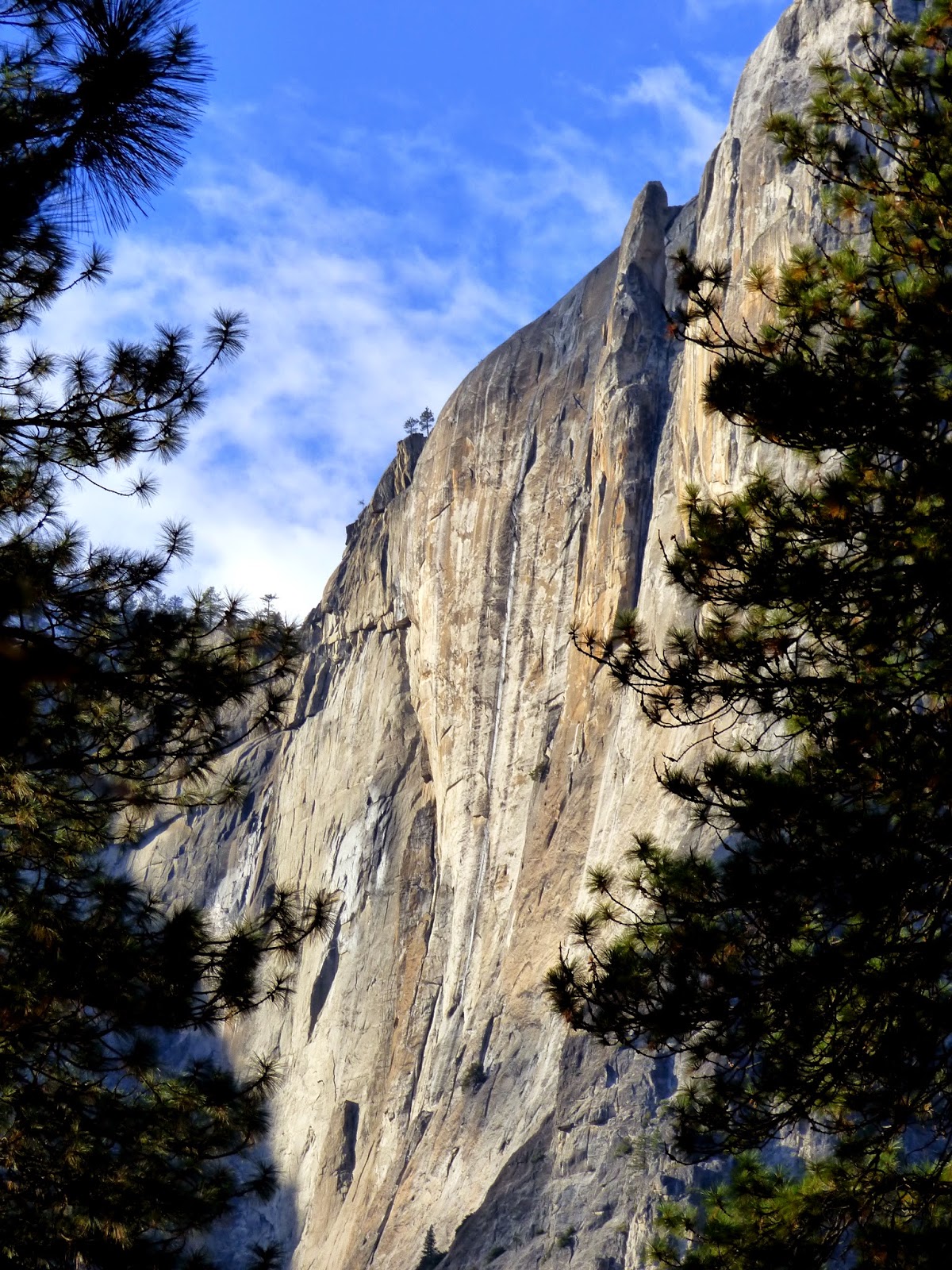 The Miwoks and other First Nation people who utilized Yosemite Valley for thousands of years no doubt had a good understanding of the geologic hazards of the valley. In about eighty visits to Yosemite Valley, I've seen two rockfalls, and heard several others. They are common events in the glacially steepened valley. Joints and exfoliation fractures provide the loosened rock, while ice wedging or earthquakes provide the tipping point that sends the rocks plummeting to the valley floor.


With the first streak of dawn she bounded swiftly up the rough canyon, for she was fully convinced that some terrible fate had overtaken the brave Kos-su'-kah, and soon she -stood upon the lofty summit, where she found her lover's footsteps leading towards the edge of the precipice. Drawing nearer she was startled to find that a portion of the cliff had given way, and, upon peering over the brink, what was her horror to discover the blood-stained and lifeless body of Kos-su'-kah lying on a rocky ledge far beneath.

Summoning assistance by means of a signal fire, which was seen from the Valley below, a rope was made of sapling tamaracks lashed firmly together with thongs from one of the deer that was to have furnished the marriage feast, and Tee-hee'-nay herself insisted on being lowered over the precipice to recover the body of her lover. This was at last successfully accomplished, and when his ghastly form lay once more upon the rocky summit, she threw herself on his bosom and gave way to a passionate outburst of grief. 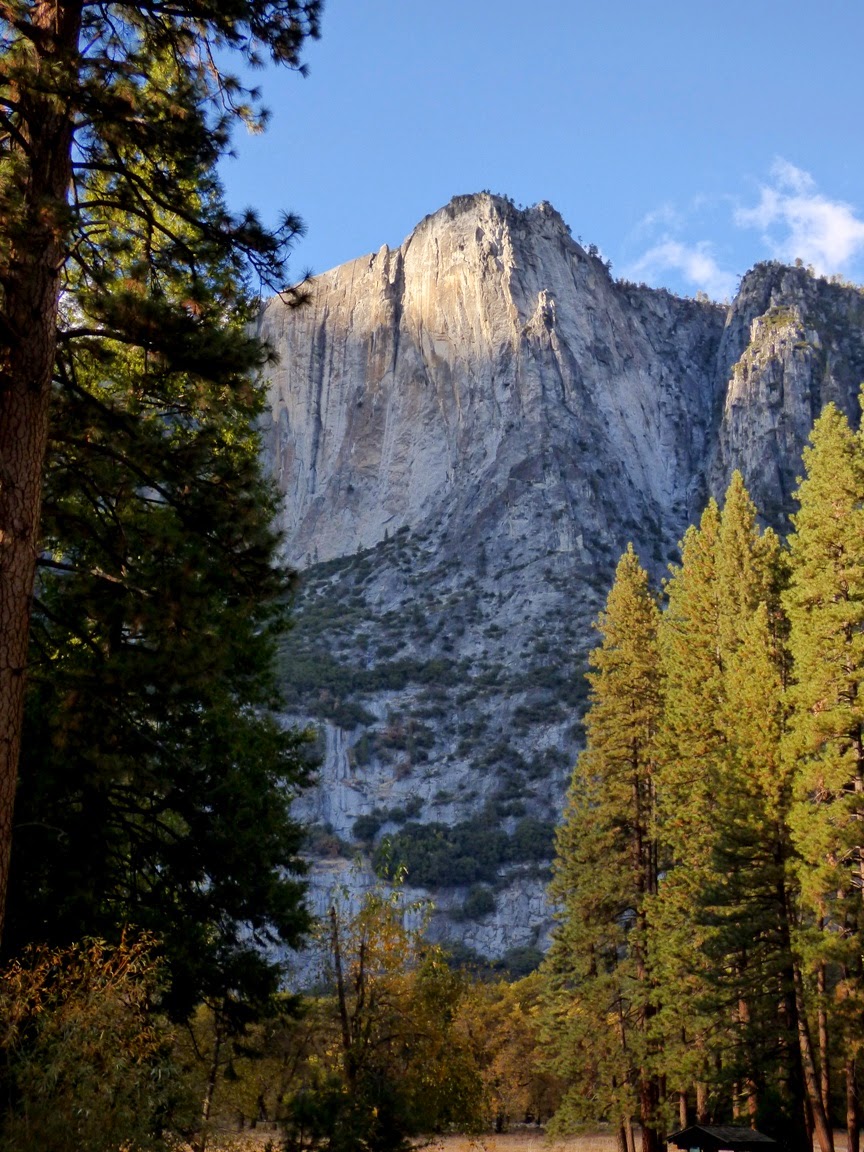 Finally she became quiet, but when they stooped to raise her they found that her spirit had fled to join the lost Kos-su'-kah, and that the lovers were re-united in death.

The fateful arrow that was the cause of so much sorrow could never be found, and the Indians believe that it was taken away by the spirits of Kos-su'-kah and Tee-hee'-nay. In memory of them, and of this tragedy, the slender spire of rock that rises heavenward near the top of the cliff at this point is known among the Indians as Hum-mo', or the Lost Arrow.

There are so many elements of humanity in this legend, even to the echoes of the ending of Romeo and Juliet (there is also a favorite folk song of the eastern Sierra Nevada with a similar tragic ending: Darcy Farrow). After all, what is the role of a myth but to teach us about life, both the happy parts and the tragic ones? This is one of my favorite Sierra legends.

I couldn't help but notice that in the legend it is a remarkable thing to have descended a vertical cliff, something that today is considered a form of recreation. One year I caught sight of someone tight-rope walking from the Lost Arrow back to the main cliff. Times are different... Beautiful story, Garry. Along with the pictures, the story unfolded perfectly.