Halftime Report on Stormageddon: The View from the Great Valley (possibly a Great Lake now)

The predicted atmospheric river storm has arrived in California. Not just northern or central California, but pretty much the entire state. These are the kind of storms that can start us on the road towards breaking the drought, but it will take a lot more like this before we can dig ourselves out of the worst drought in centuries here in the Golden State. The water deficit is truly that bad.

Atmospheric river storms carry as much water as more than dozen Mississippi Rivers, and when oriented right, they can drop prodigious amounts of water in short periods of time. Parts of the California coast have received more than 10 inches of rain in the past day or two, and more rain is falling. Cities in the Bay Area have more than 3 inches thus far, and the flooding has been intense, as the news reports are showing. It didn't help matters that the storm included gale-force winds that brought down trees and caused power outages. Ours was out for an hour this morning.
It took a lot longer for the slow-moving storm to reach us in the San Joaquin Valley, the southern part of the Great Valley. The winds were blowing all night, and the rain started a little after noon. In the last twelve hours my rain gauge recorded 2.10 inches (I'm just east of Modesto, which at midnight had recorded 2.06 inches). I checked my rain gauge records, which go back to 1990, and found but a single day that ever exceeded 2 inches, back in January of 2006 (that day was 2.32 inches). But here's the thing: I measure from midnight to midnight, and the storm is still going strong. By morning, I am pretty sure we will have a record rainfall for a single storm in my 24 year record of rainfall events.

Those numbers might seem paltry to my friends in rainy environments, but our local environment is a near desert that is surrounded by mountain ranges that exert a distinct rain-shadow effect. Our average yearly rainfall is only 12 inches. And our valley floor is flat. Really, really flat. We don't have effective storm drain systems to handle such storm events. In general, the storm drains don't have enough gradient to reach nearby rivers, so we have depended on dry wells to divert the storm runoff  into our groundwater supply. This works most of the time, but when the rain exceeds an inch or so, large lakes and ponds will develop that fill streets, lawns and parking lots. It may take days for the water to seep underground. Storms of today's magnitude can develop dangerous conditions for drivers.

My neighborhood is lucky. I live east of the flattest valley floor, at an elevation of 125 feet (Modesto is closer to 65 feet). I also live only a mile from the Tuolumne River. A decade ago the city completed a storm drain that connects directly with the river, so we don't get the horrible ponding that once took place.

The rain will be falling through the day on Friday, and we'll have a break until Monday when another storm will move in. We appreciate the moisture so much, but a bit of it at a time, please! 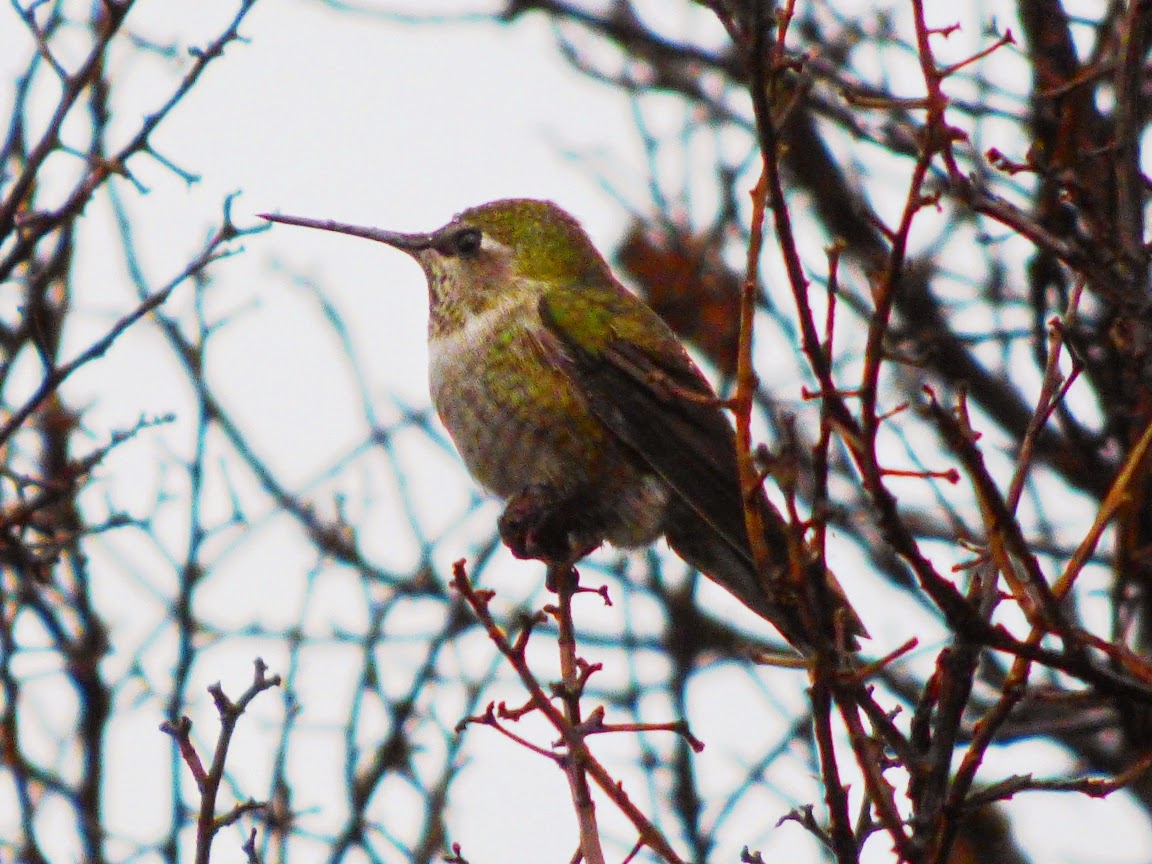 The birds in my neighborhood took things in stride. Here is an Anna's Hummingbird that sheltered in our backyard for awhile today.
Posted by Garry Hayes at 12:56 AM

I'll be on my way to the Salton Sea next week (21st). It will be interesting to find out how much this storm has affected that part of CA.