If These Cliffs Could Talk: Tu-tok-a-nu'-la, the Greatest Cliff of All in the Ah-wah-nee 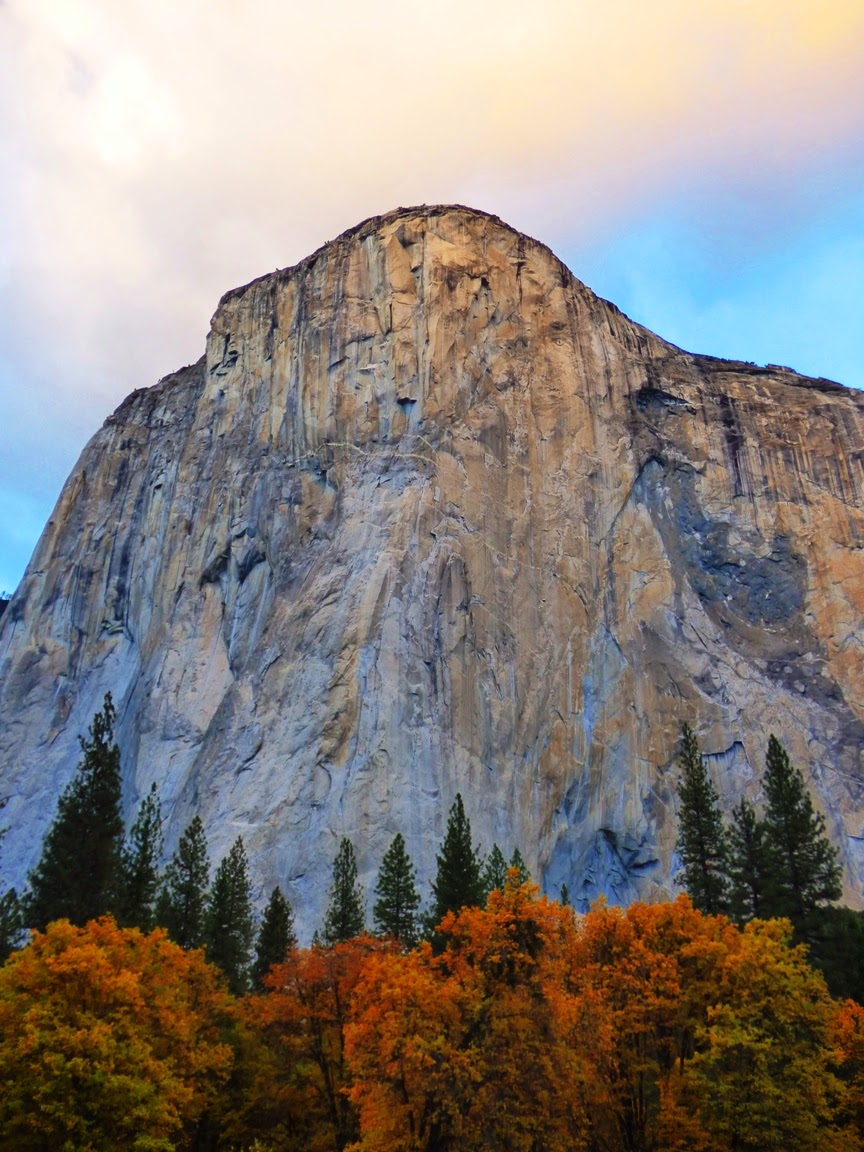 So...who was the first to climb El Capitan, the stupendous cliff in Yosemite Valley? There are those who say it was Warren Harding, Wayne Merry and George Whitmore in 1958, but the elder people know better. It was climbed in the ancient days by the Tu-tok-a-nu'-la. That was the reason for the name they gave the incredible cliff. 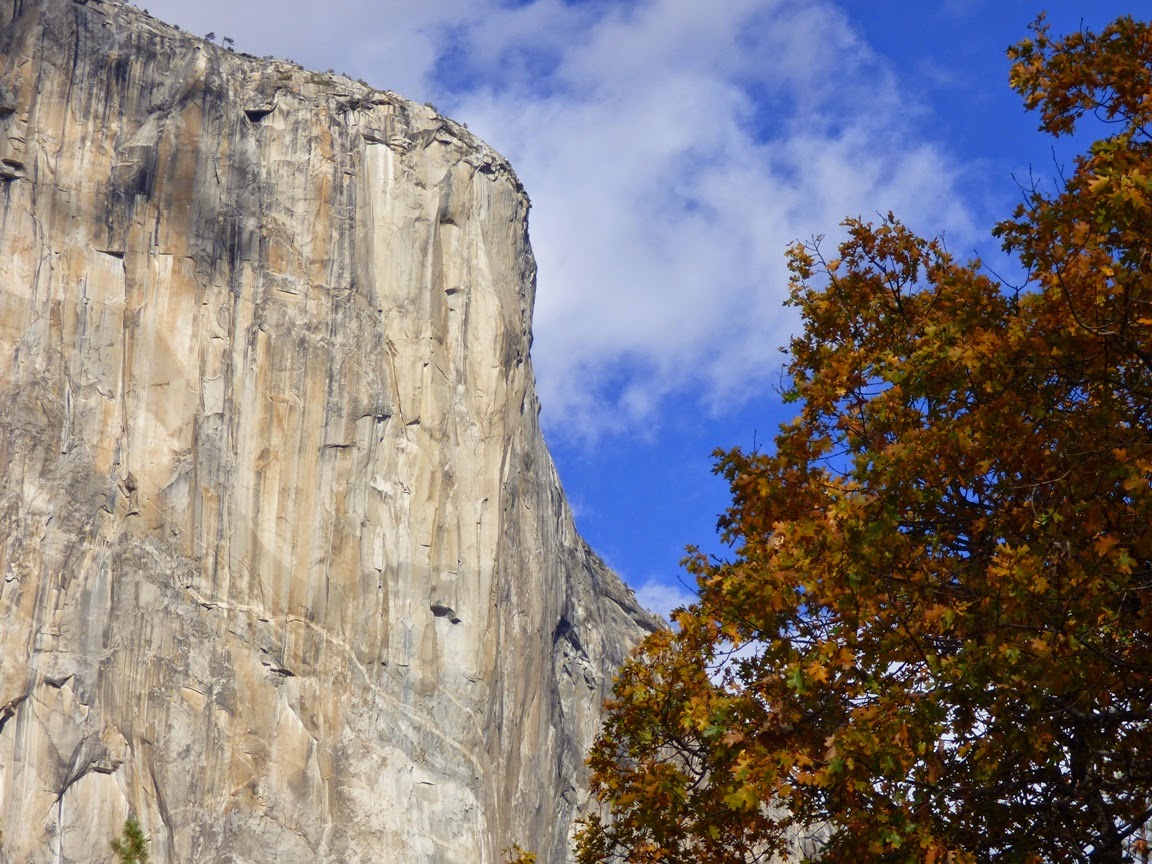 El Capitan/Tu-tok-a-nu'-la stands out as one of the tallest sheer cliffs on the planet, at about 3,000 feet (Mt. Thor on Baffin Island is probably the tallest drop at 4,101 feet). The cliff is composed principly of at least three kinds of plutonic igneous rock, the El Capitan granite, the Taft granite, and the Diorite of North America, but recent detailed mapping recognizes a total of eight different intrusions. 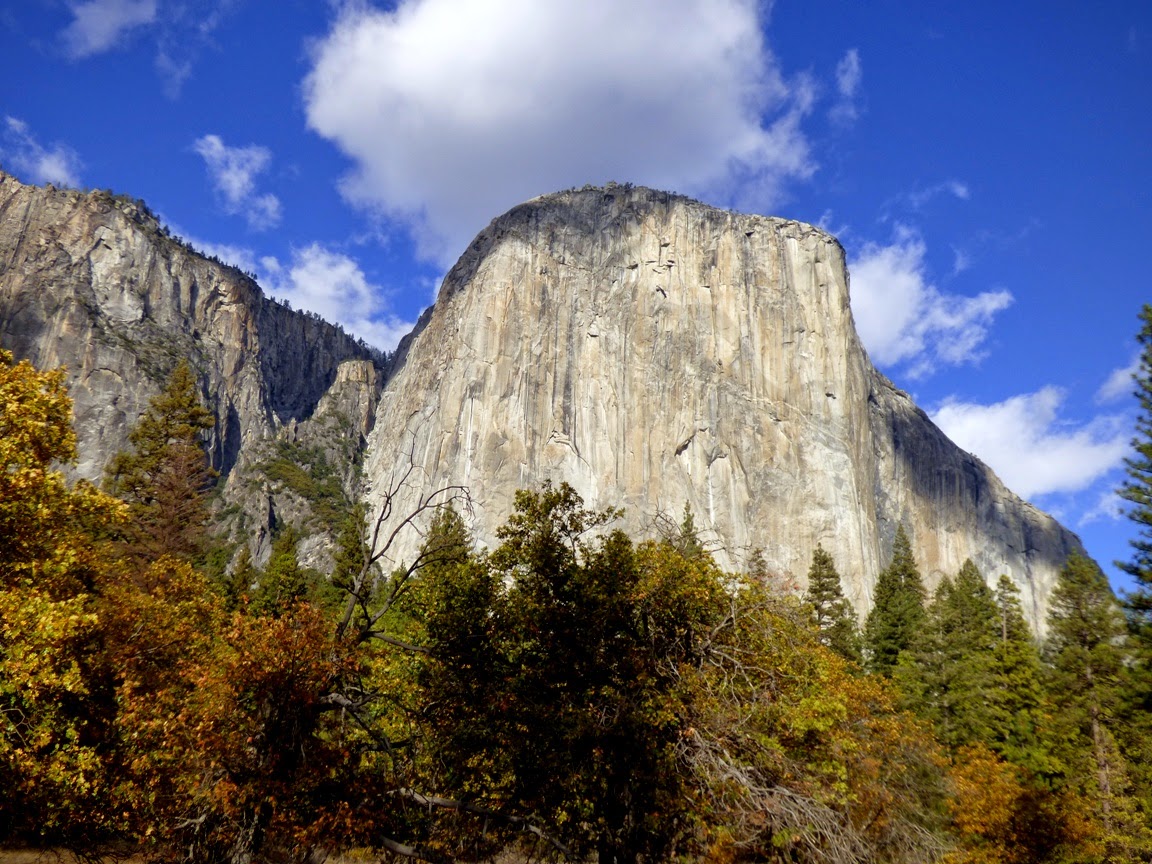 The rocks date from the age of the dinosaurs, the Cretaceous Period, around 100 million years ago. The complex mix of rocks represents the interior plumbing of a long gone volcanic system much like those that are active in the Cascades or the Andes Mountains. Imagine standing six miles below the summit of Mt. Shasta or Mt. Rainier in the complex system of molten or semi-molten magma chambers and you have the correct picture.

The mere presence of granitic rock at the Earth's surface speaks of incredible amounts of erosion. Five or six vertical miles of overlying rock has been eroded off the Sierra Nevada, dumped into the Great Valley (which by coincidence is about five miles deep with sediments), or into the Pacific Ocean through San Francisco Bay, or the early canyons that existed to the south. Debates continue as to the precise rate and timing of the uplift and erosion of the mountains, but tricky arguments have led to creative new approaches to research. 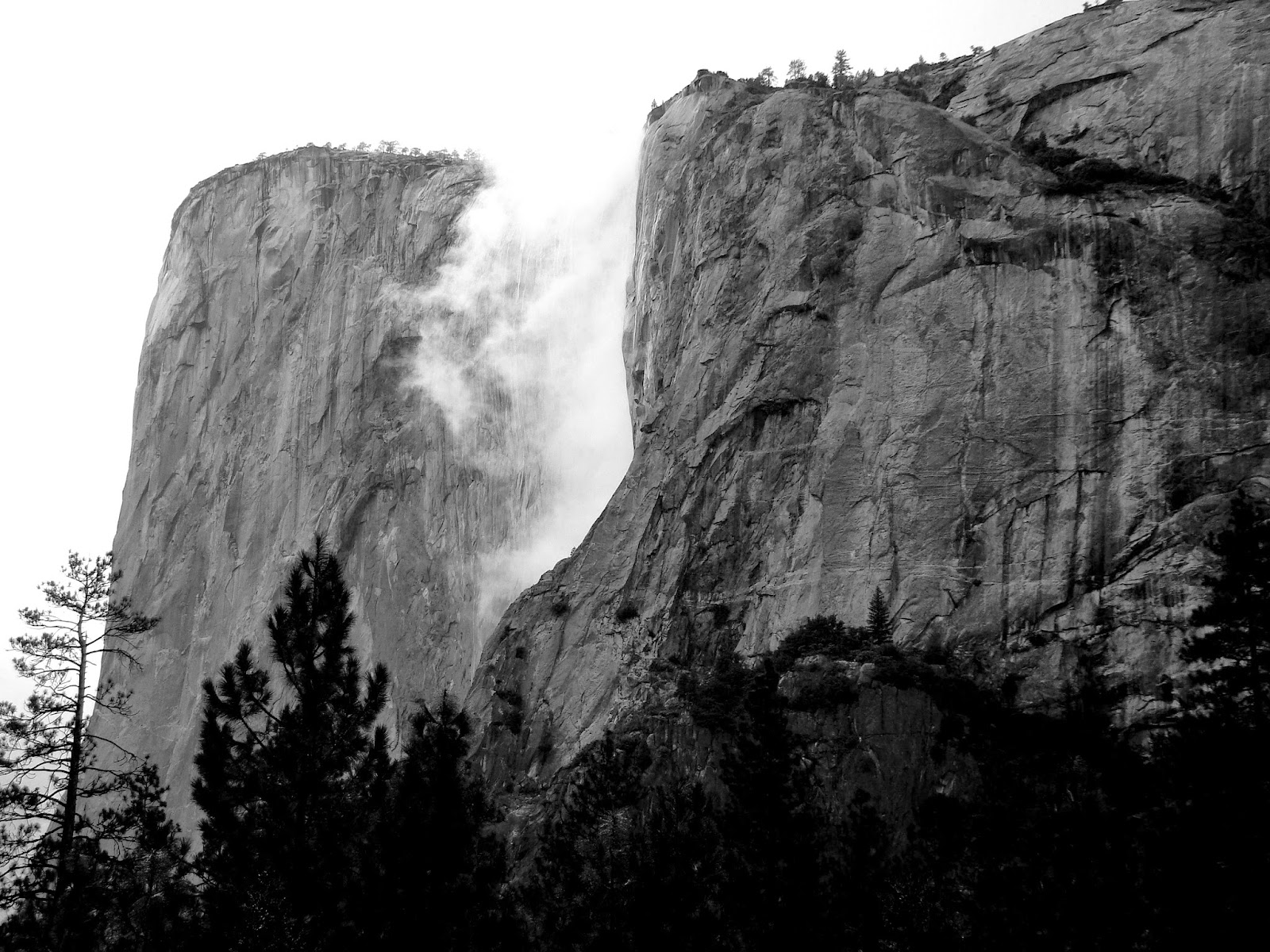 The last part of the story is the erosion and carving of the great cliff. The Merced River started the process, carving a deep V-shaped canyon as the mountains first rose by tilting westward. Around two million years ago, the climate began to fluctuate wildly, causing a series of ice ages. The so-called Pre-Tahoe or Sherwin stage around 800,000 years did most of the work of shaping the vertical walls, as the whole of Yosemite Valley was entirely filled with ice in that period. Subsequent glacial advances barely reached the base of El Capitan. 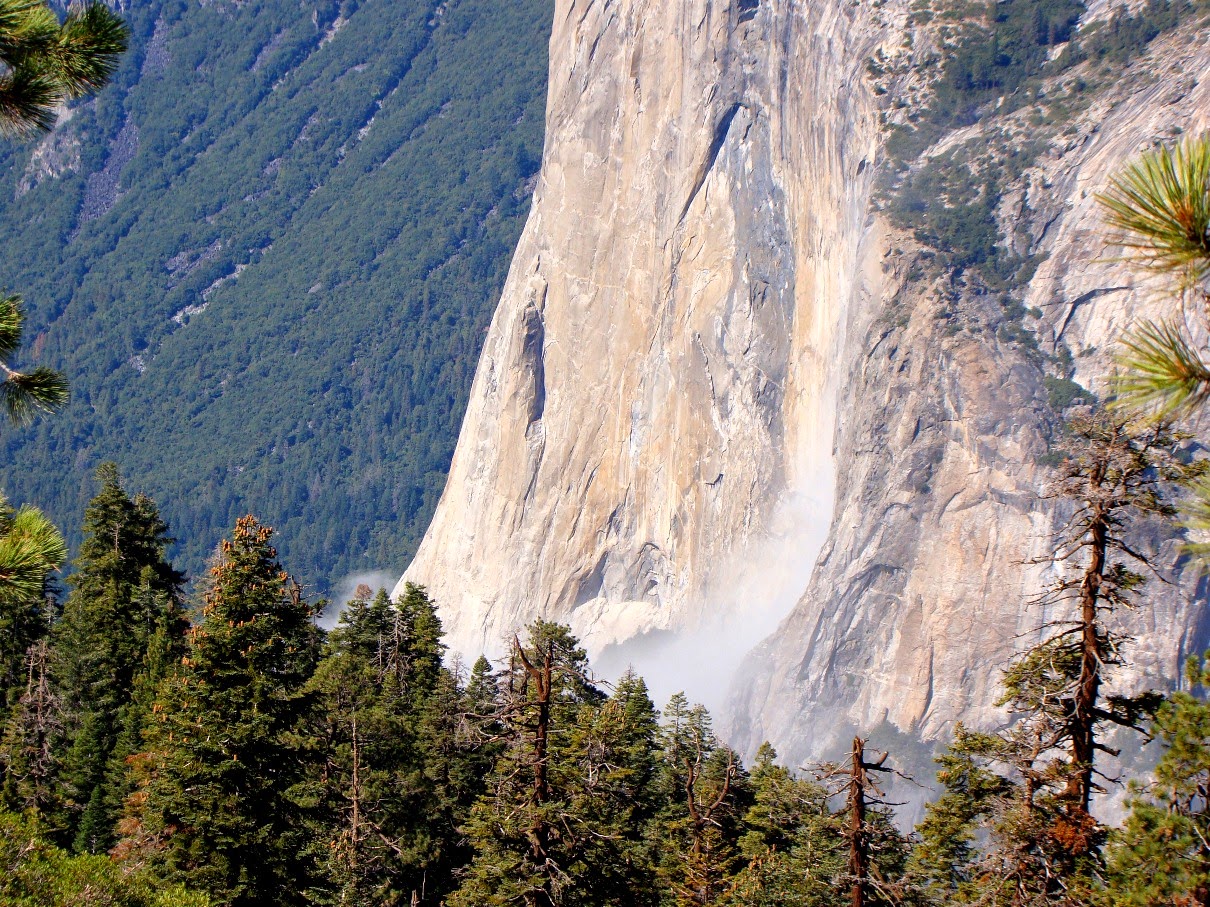 Rockfalls continue to change the shape of the cliff. I was resting near the top of Sentinel Dome in October of 2010 when I heard a loud commotion across the valley. I jumped up in time to see a massive plume of dust spreading from the base of El Capitan, caused by the collapse of around 1,000 cubic meters of rock from the cliff. Several climbers, including one of my former students, were hanging from the cliff just a few yards away. Significant chunks of rock tend to break off at an average of once a week. 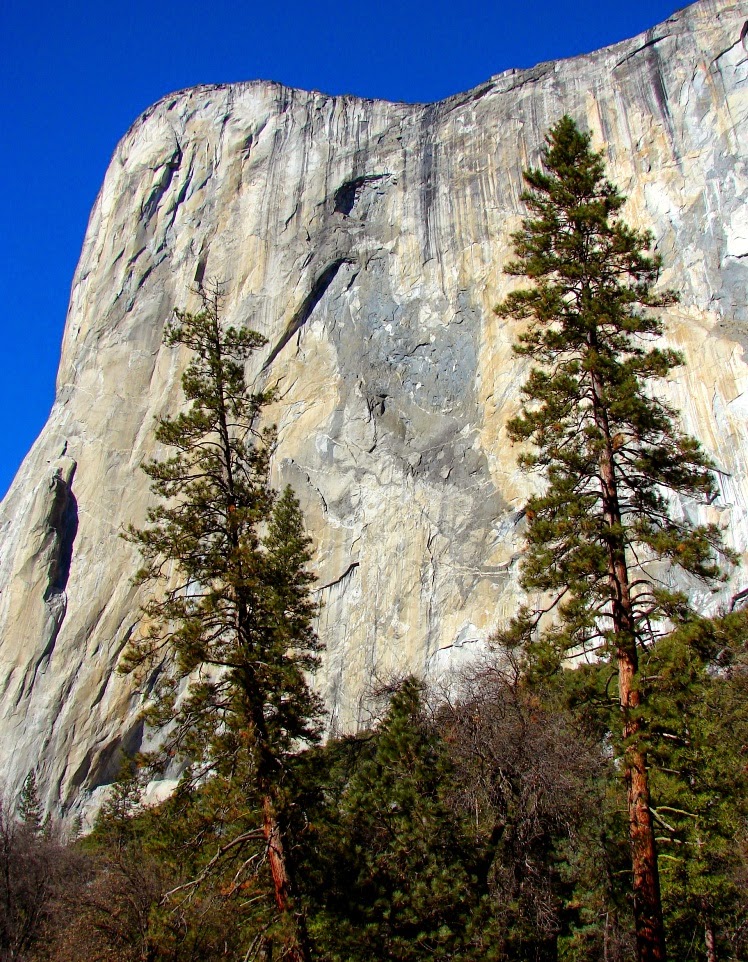 The first people of the valley of the Ahwahnee tended to see the cliffs as having originated through growth. Their legend involves two human children or two bear cubs (I prefer the latter). The story comes to us from Yosemite Indians; Yesterday and Today by Elizabeth H. Godfrey (1941):


Long, long ago there lived in the Valley of Ah-wahnee two cub bears. One hot day they slipped away from their mother and went down to the river for a swim. When they came out of the water, they were so tired that they lay down to rest on an immense, flat boulder, and fell fast asleep. While they slumbered, the huge rock began to slowly rise until at length it towered into the blue sky far above the tree-tops, and wooly, white clouds fell over the sleeping cubs like fleecy coverlets.

I imagine that from the right perspective, the cliff did rise as the mountains did, and was simply exposed by the flowing river and glaciers. The animals in the story have a different sense of time, though. That was a very long nap! 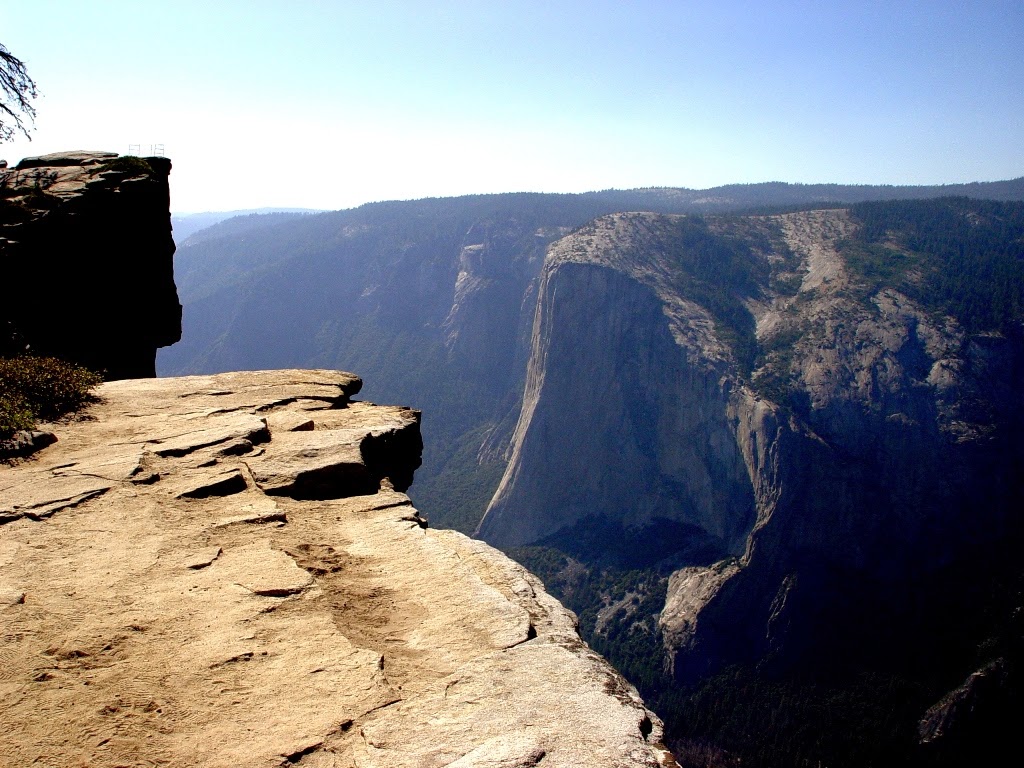 In vain did the distracted mother bear search for her two cubs, and although she questioned every animal in the valley, not one could give her a clue as to what had happened to them. At last To-tah-kan, the sharp-eyed crane, discovered them still asleep on top of the great rock. Then the mother bear became more anxious than ever lest her cubs should awaken, and feel so frightened upon finding themselves up near the blue sky that they would jump off and be killed.

All the other animals in the valley felt very sorry for the mother bear and promised to help rescue the cubs. Gathering together, each attempted to climb the great rock, but it was as slippery as glass, and their feet would not hold. Little field mouse climbed two feet, and became frightened; the rat fell backward and lost hold after three feet; the fox went a bit higher, but it was no use. The larger animals could not do much better, although they tried so hard that to this day one can see the dark scratches of their feet at the base of the rock

When all had given up, along came the tiny measuring worm.

“I believe I can climb up to the top and bring down the cubs,” it courageously announced.

Of course, the other animals all sneered and made sport of this boast from one of the most insignificant of their number, but the measuring worm paid no attention to their insults and immediately began the perilous ascent. “Too-tack, too-tack, To-to-kon-oo-lah,” it chanted, and surely enough its feet clung even to that polished surface. Higher and higher it went, until the animals below began to realize that the measuring worm was not so stupid after all. Midway the great rock flared, and the measuring worm clung at a dizzy height only by its front feet.

Continuing to chant its song, the frightened measuring worm managed to twist its body and to take a zig-zag course, which made the climb a great deal longer, but much safer. Weak and exhausted it at last reached the top of the great rock, and in some miraculous manner awakened the cubs and guided them safely down to their grief-stricken mother. Of course, the whole animal kingdom was delighted and overjoyed with the return of the cubs and the praises of the measuring worm were loudly sung by all. As a token of honor the animals decided to name the great rock “To-to-kon-lah” in honor of the measuring worm. 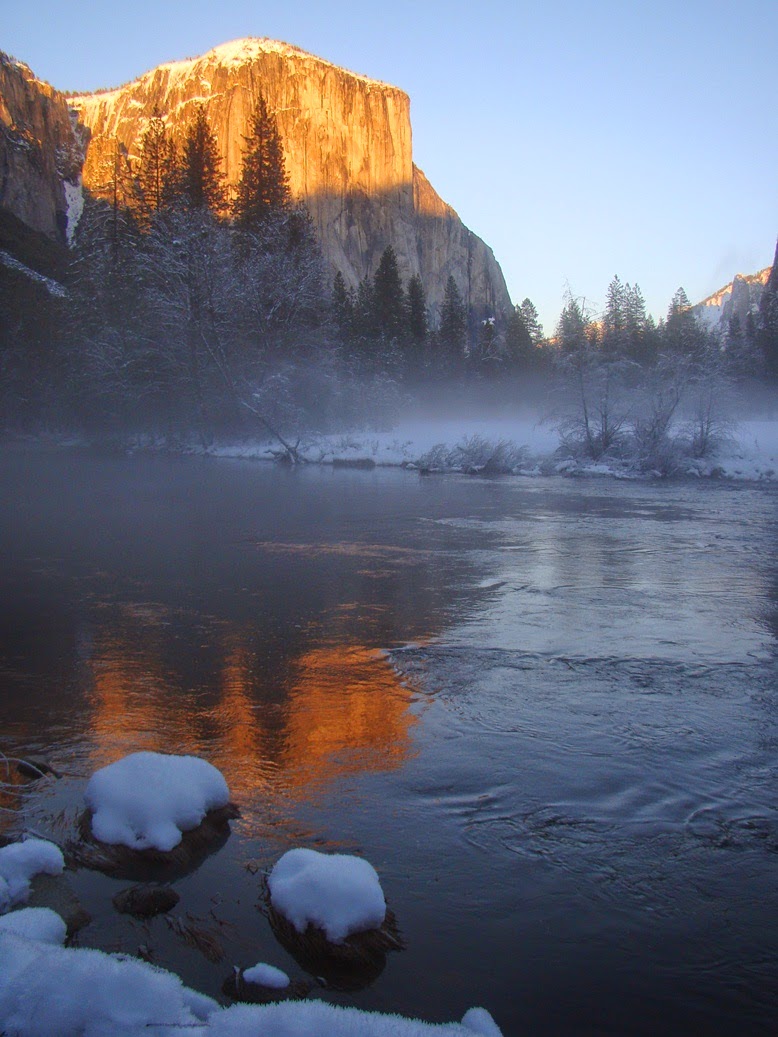 It's a great story, especially the idea that everyone has skills that contribute to the good of the group or society. It reminds me of the parable or fable of the mouse and lion (mouse actually has a skill that saves the life of the lion after it shows mercy to the rodent).

In any case, Tu-tok-a-nu'-la is one of the world's great sights. I would say "don't miss it" when you visit Yosemite Valley, but the fact is, you cannot miss it. I can say "don't miss a sunset" though. It's during the moments of last light that the cliff truly glows. 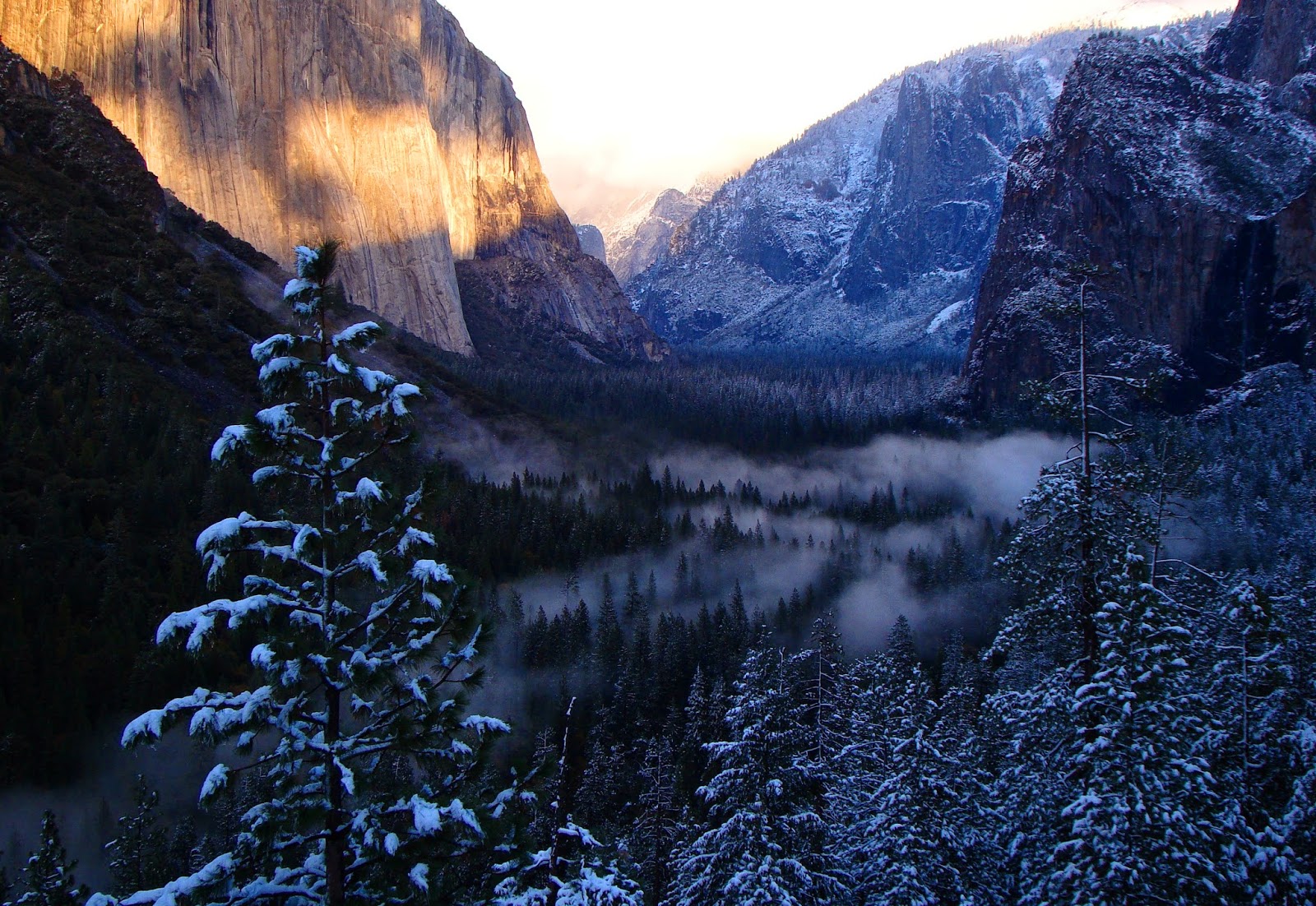