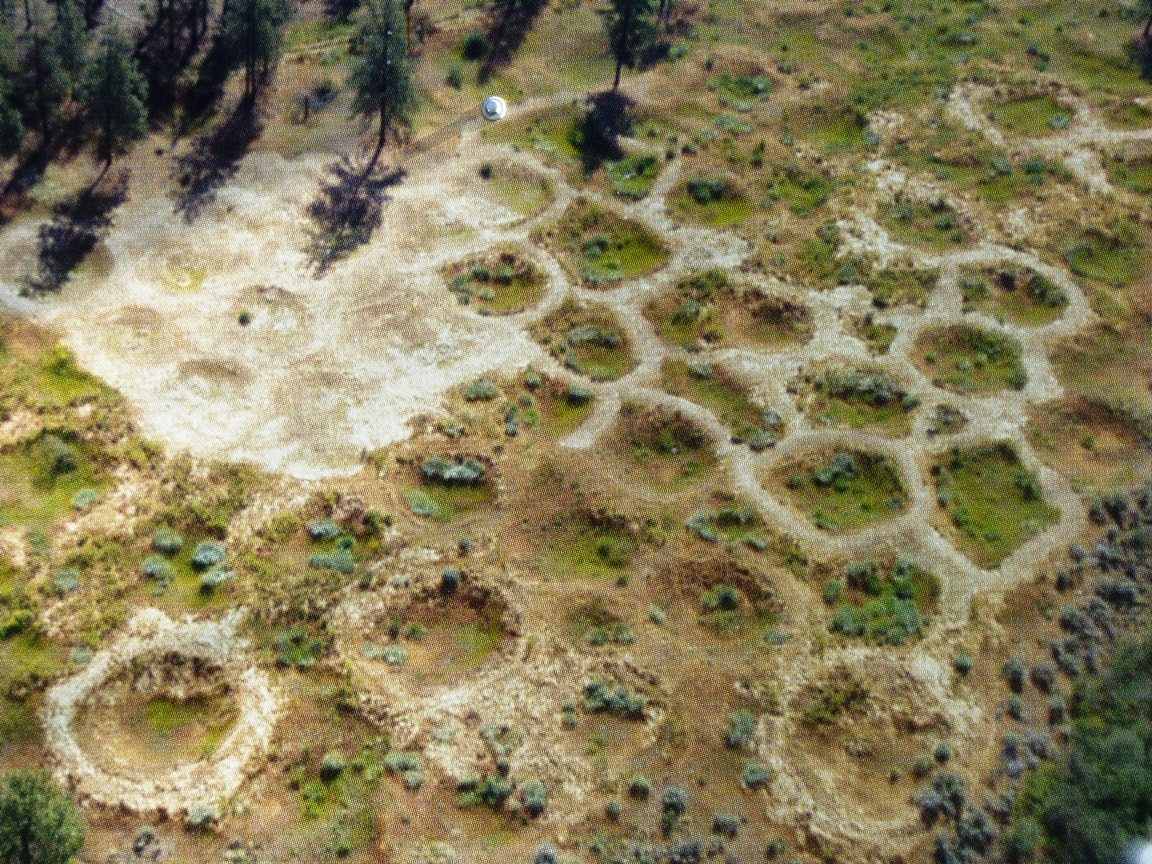 Thanks for all of your conjectures about yesterday's mystery photo! The Earth is such a fascinating place, and there are so many different kinds of strange patterns that have different origins. Let's review some of the guesses (and they were very good, by the way):
a. Sinkholes and karst topography
b. Bison wallows
c. Ground squirrel or prairie dog workings
d. Periglacial patterned ground
e. Dried marshes, evaporative processes
f. Pithouses 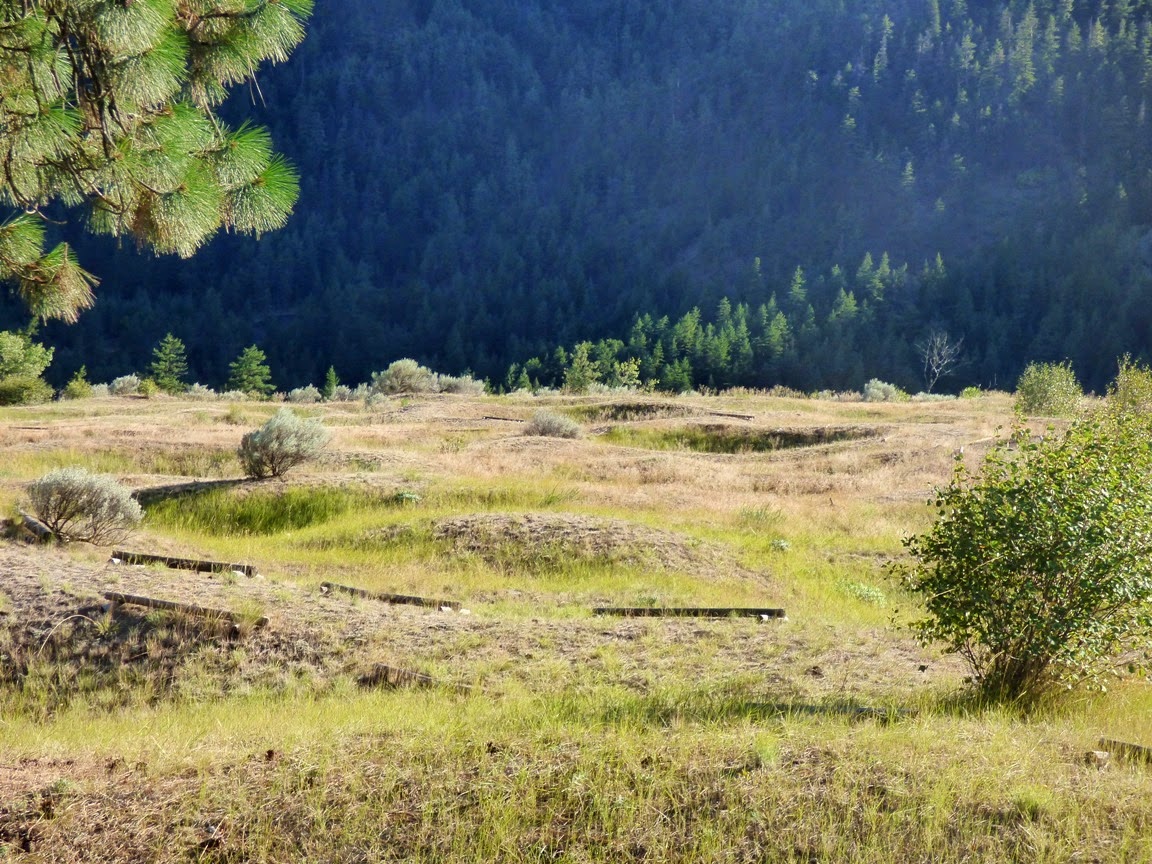 Take a look at the depressions from ground level. The rocks are gravel and sand, so karst is not likely (sinkholes most often result from the collapse of caverns in areas underlain by limestone). Something like a buffalo wallow makes some sense, but these are very concentrated, and the region is not really good buffalo habitat (too much mountain slope and not enough prairie). Rodents like prairie dogs or gophers tend to produce mounds (so called 'mima mounds') rather than hollows. The location of the site on a high river terrace tends to rule out the idea of swamps or evaporative processes. 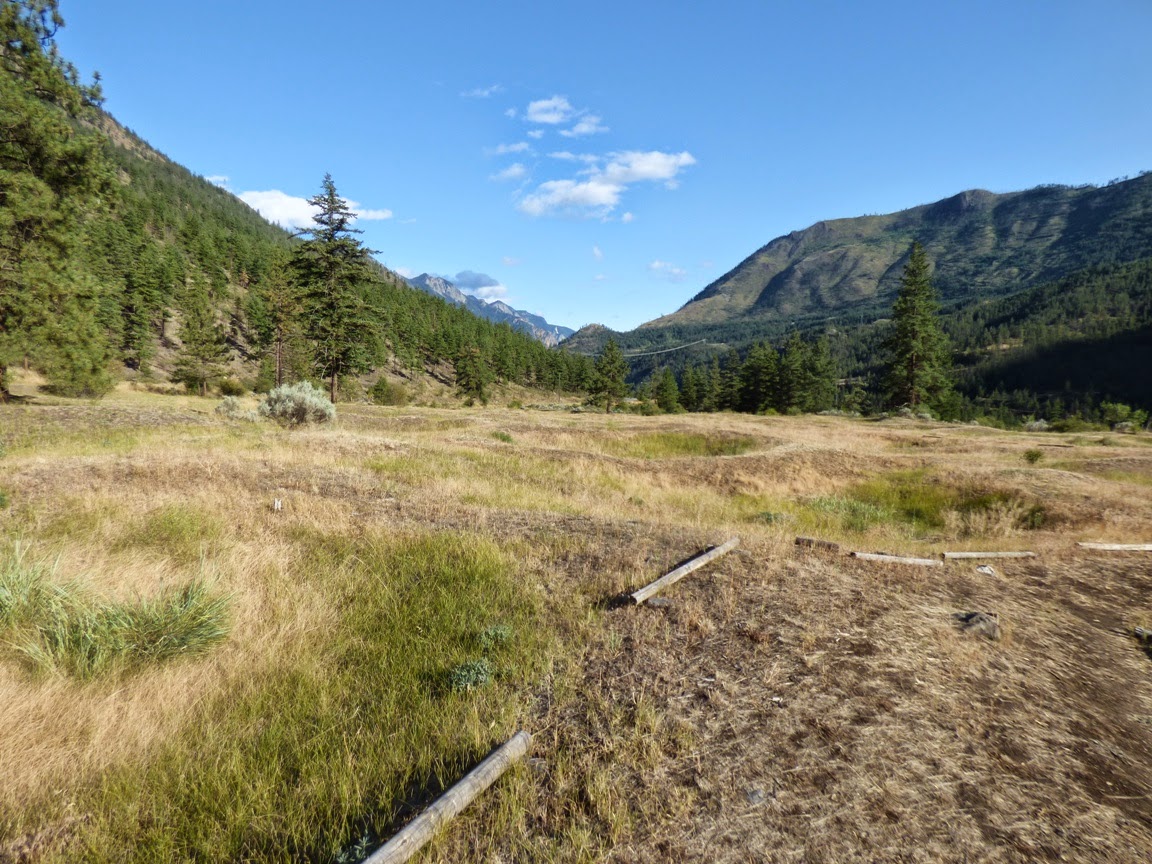 Of the natural processes that could make this phenomena, periglacial processes make the most sense. Freezing and thawing of soils often result in rings and polygons that might resemble what we saw in the picture. The region underwent glaciation in the Pleistocene epoch and continues to have extremely cold temperatures in winter. It makes some sense, but then why are the pits filled with so many artifacts? 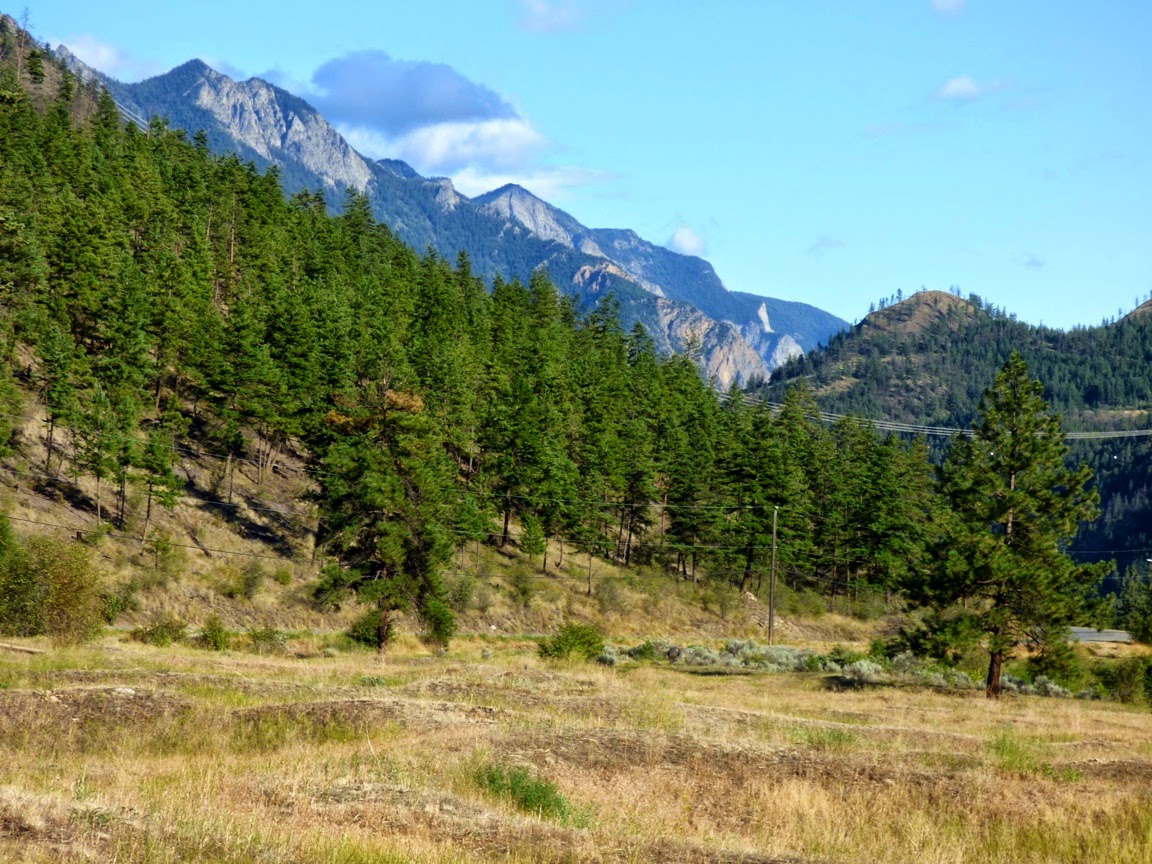 So yes, these pits are made by humans. We were paying a visit to the lands of the Xwisten people, a First Nations group whose traditional lands were along the Fraser and Bridge Rivers near Lillooet, British Columbia. This river terrace surface contains the remains of dozens of pithouses. 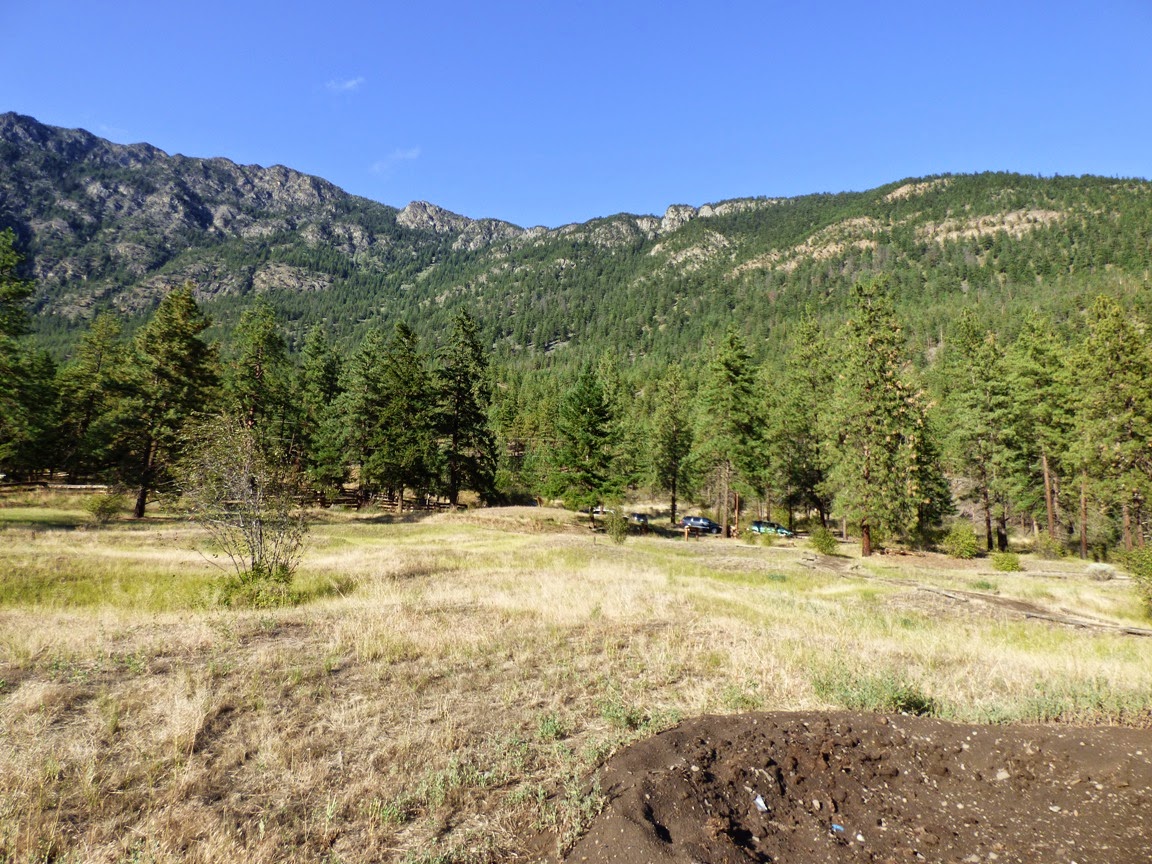 The former village along the Bridge River is the site of ongoing archaeological excavations by researchers and students of the University of Montana as well as local members of the Xwisten tribe. 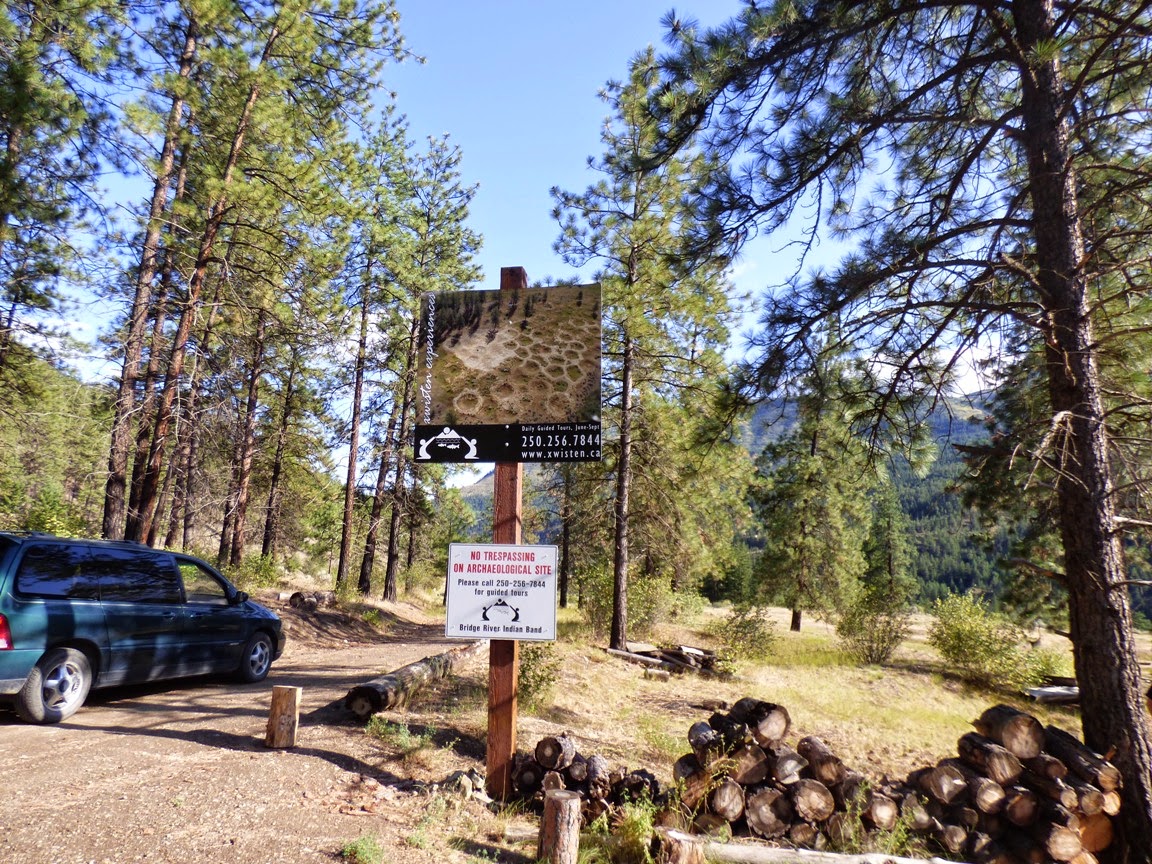 We were being led on a tour of the archaeological site by several members of the Xwisten Bridge River Band who had been involved in some of the excavations. The setting was dramatic, with high mountain peaks on all sides. 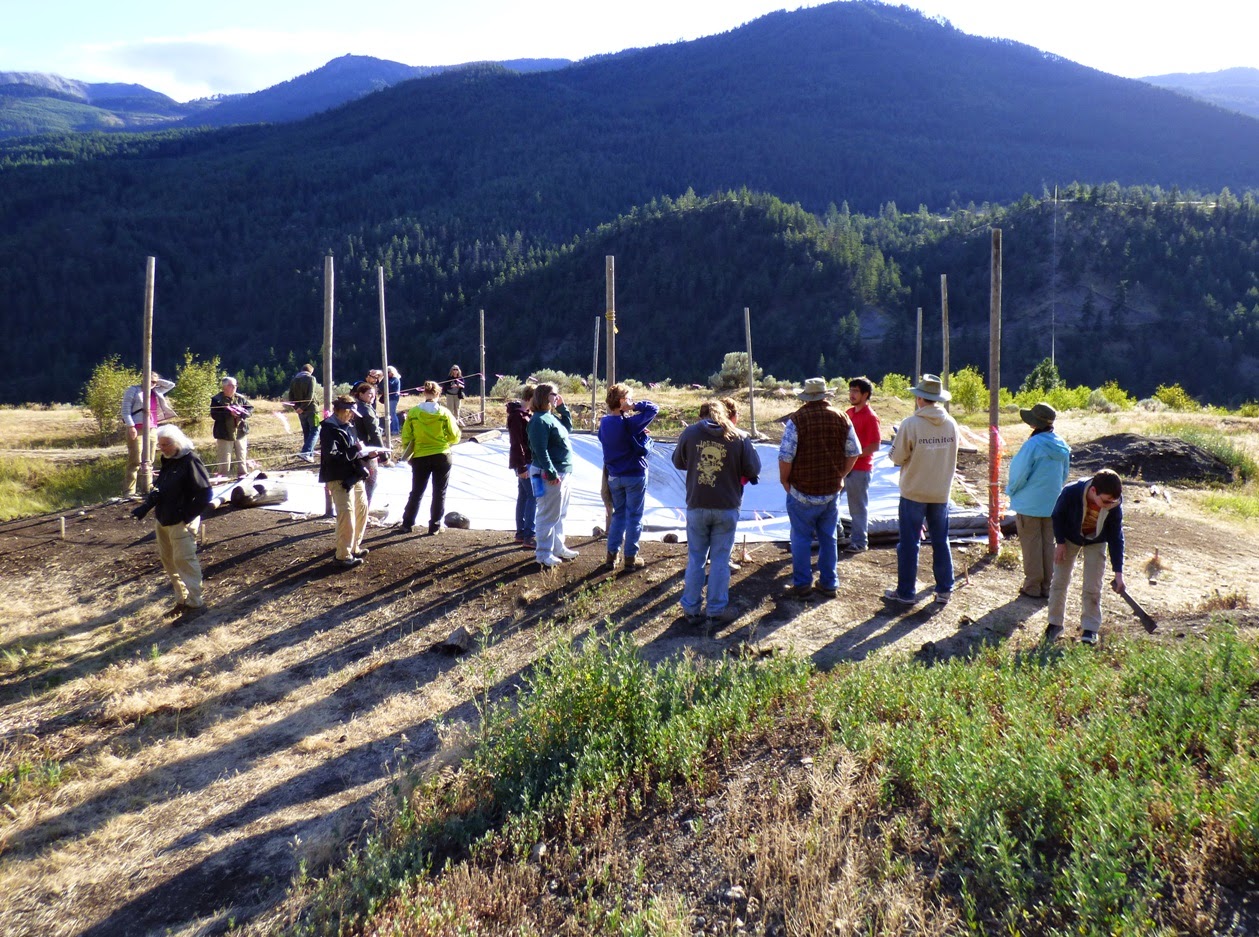 As is the case with most archaeological digs these days, only a small portion of the site is being studied in detail. There is an expectation that future technology will be able to better analyze the site, so much of the village remains undisturbed for the time being. Only one of the pithouses was exposed when we visited. 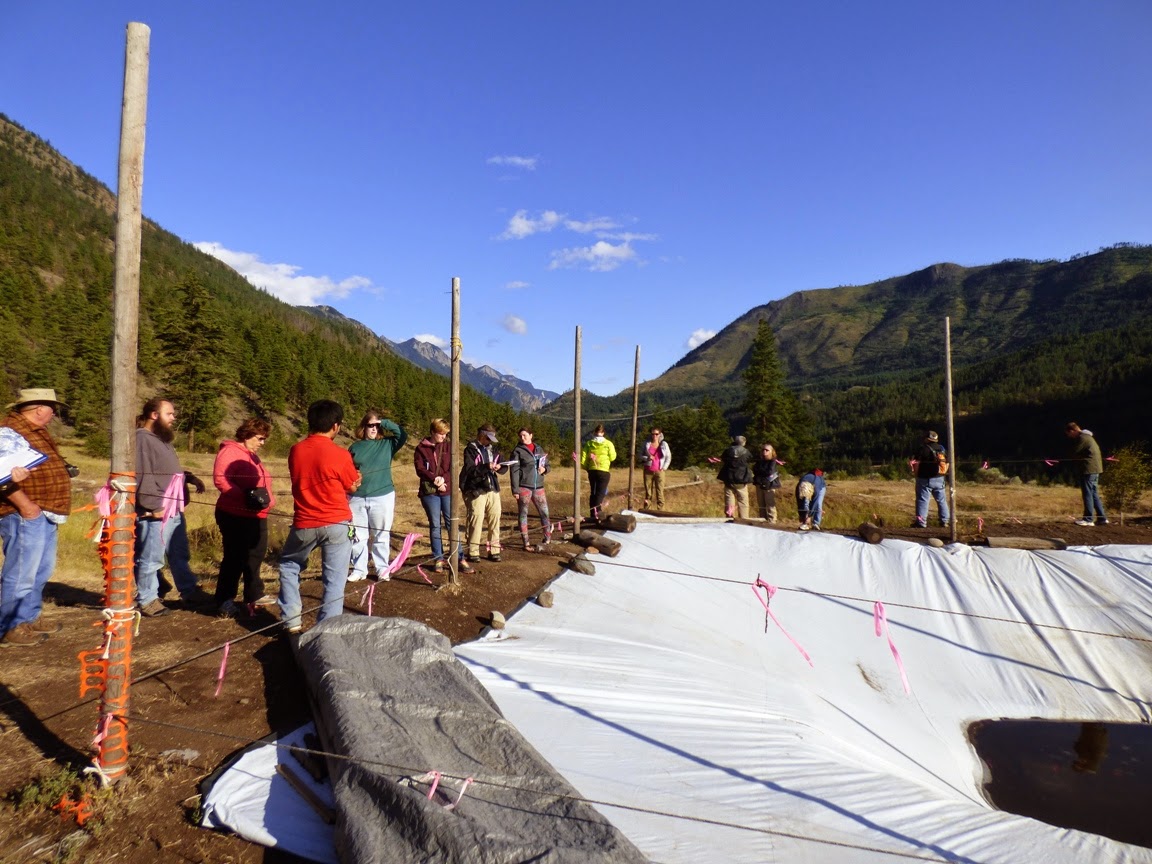 The village site was abandoned over a century ago, although many Xwisten live in a modern village just a few hundred yards away. Evidence from the site investigations show nearly continuous occupation of the site beginning about 1,800 years ago. Many of the sites were used over and over, with some of the pits containing 12 levels of occupation. 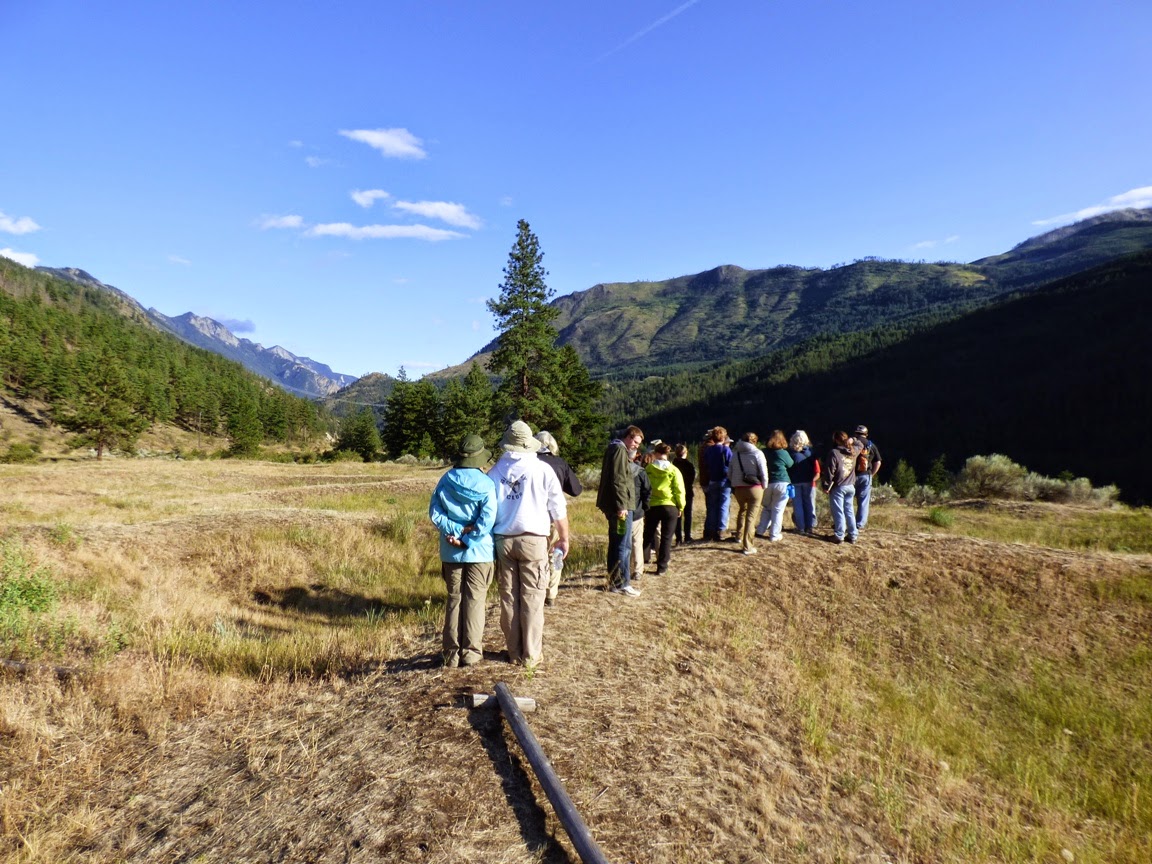 A few years ago the Xwisten decided to build a pithouse on the site using the knowledge of their elders. One of our guides noted that what took their ancestors several weeks to construct took them more like three years even though they had modern tools. Entry was usually through a square hole in the room, although some may have had side entrances. The ladders, as you can see below were notched logs. With well insulated ceilings the pithouse seemed like it would be roomy and warm in winter conditions. 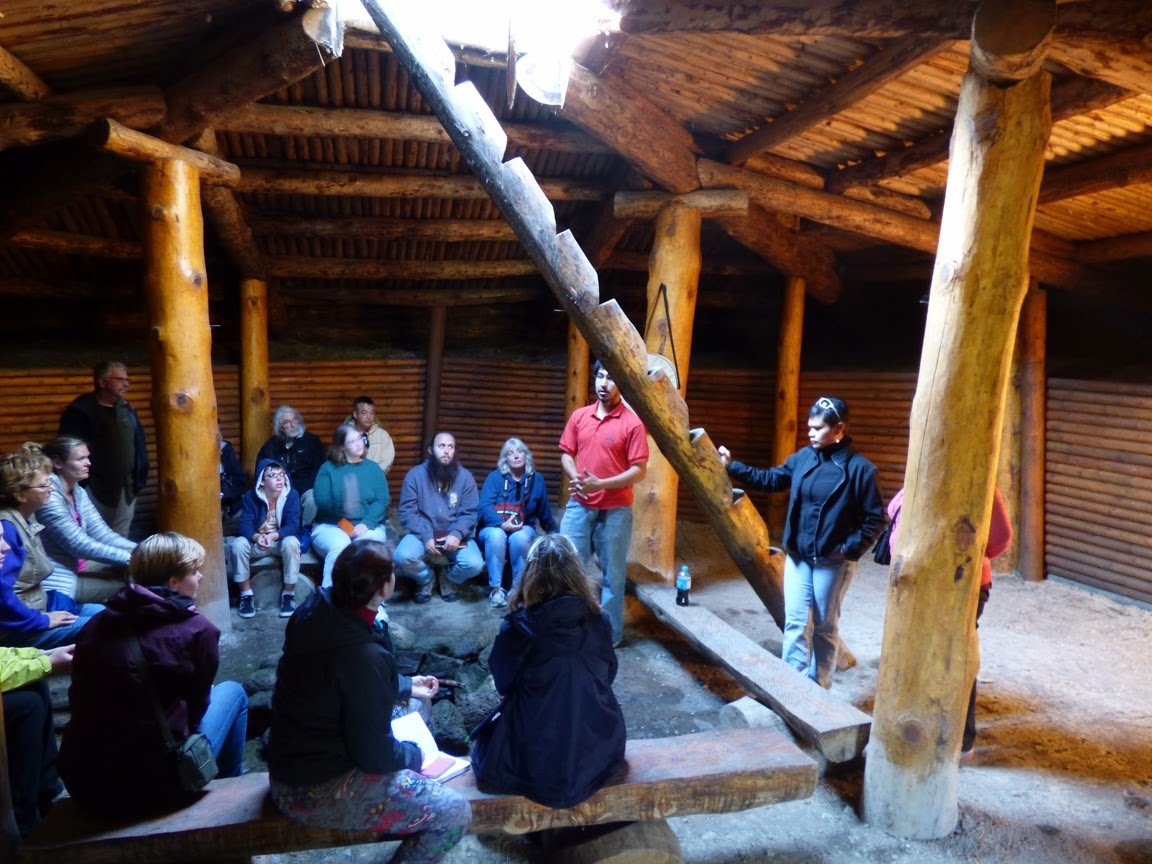 The Xwisten subsisted in part on salmon, and part of the demonstration was the preparation of salmon for eating and preservation. Our tour concluded with a salmon dinner. The sun was getting low, and we had another two hours of highway ahead of us. We drove into the night arriving at our hotel in Kamloops sometime after ten o'clock. It was a long, but fascinating day. We had left the Coastal Belt and were now making our way through the Intermontane Belt. We'll pick up the story in the next post! 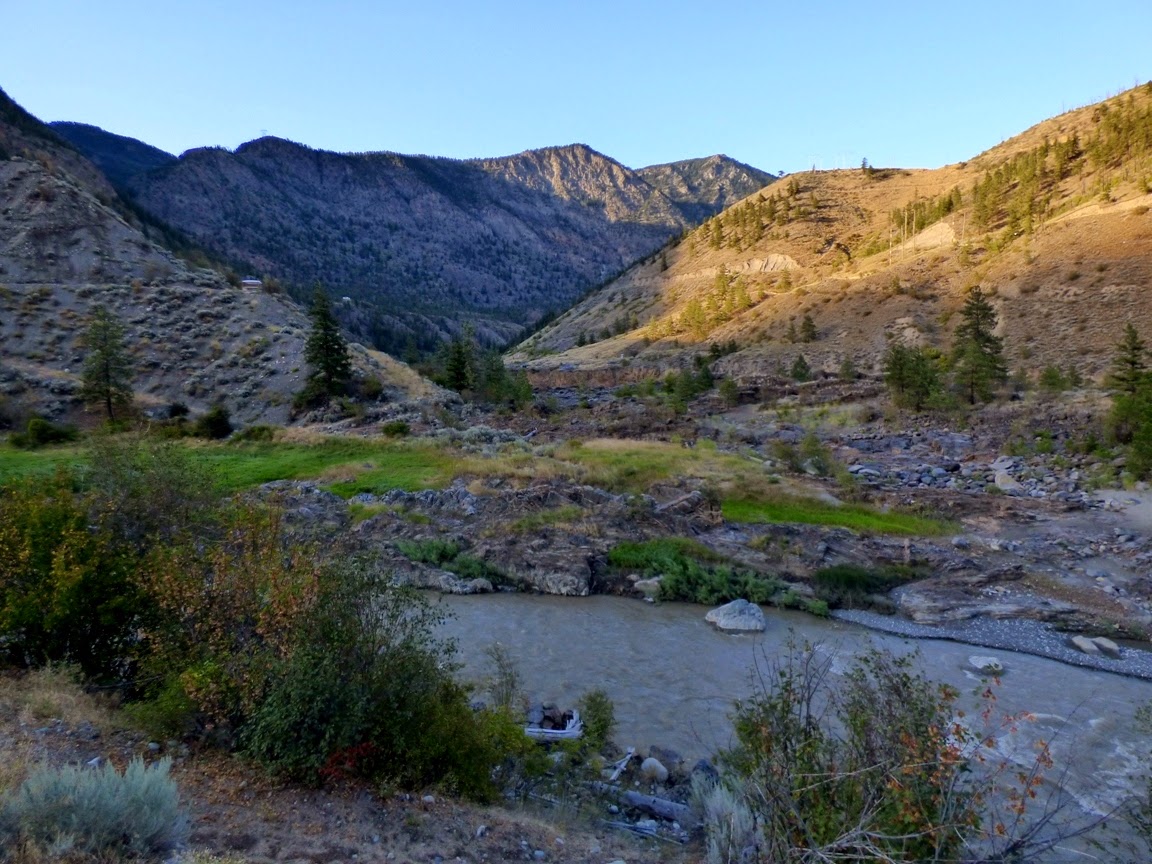 To AF, the commenter in the last post who lives in Lillooet, let me know if I got anything wrong! Our visit was very quick, and I'm just a geologist, not an anthropologist!
Posted by Garry Hayes at 11:32 PM

Great pictures. The pit house looks great. It's one of my favourite exhibits at the BC Royal Museum in Victoria. As you say, it looks roomy, comfortable, warm and dry. I imagine they would cover the top opening with skins or something when raining?

I've always liked how they look in the interior of the quiggly. All the natural finish of the wood logs and poles, in geometric shapes makes the whole a beautiful.

I would imagine the four main posts are set into holes, and the tops are pegged to keep them from moving.

I think it would be great to have something like that in the back yard. Toss the kids down when they get too rambunctious.

You guys really did some travelling.

The pithouse looks very comfortable. What are the average temperatures in that region? Was it needed to add some warming material inside?
How it was organised inside the pithouse? It was divided into several zones, like kitchen, bedroom, etc.?