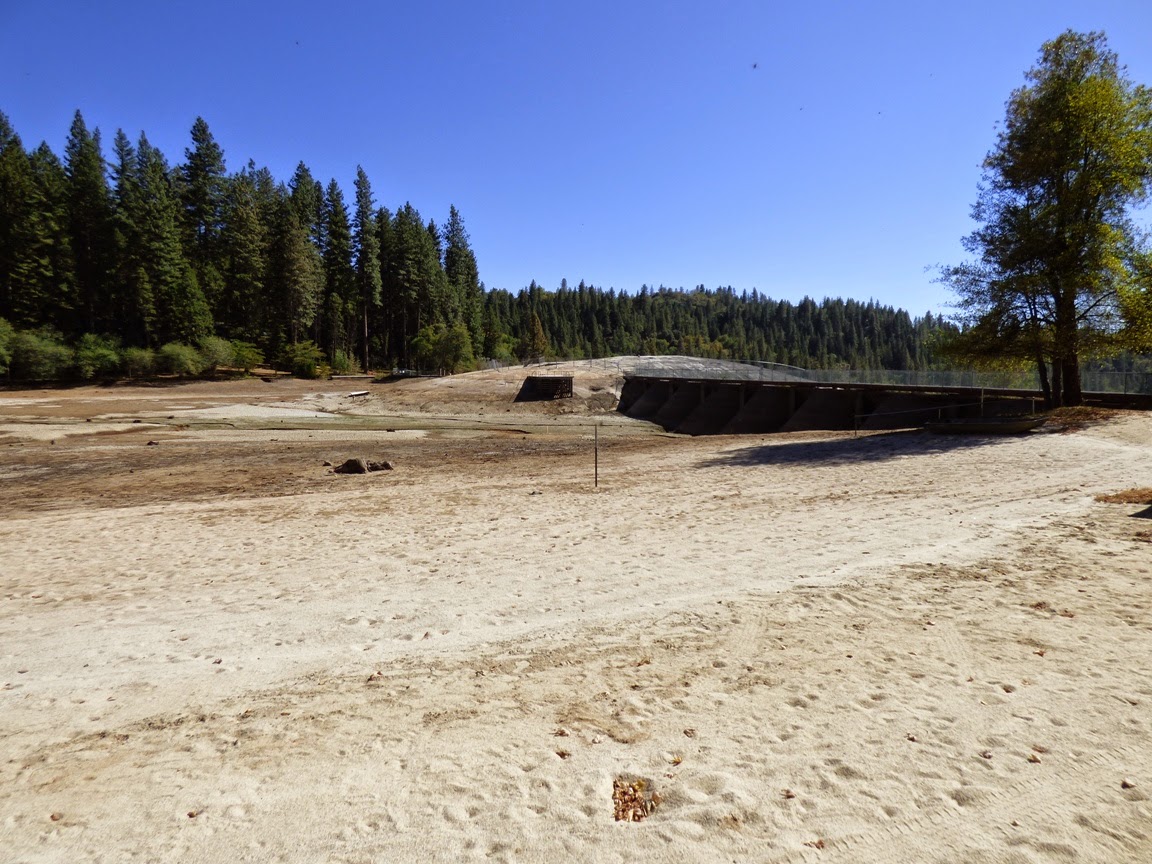 There is an ongoing geological drama going on the Sierra Nevada that may be unique (to the extent of my knowledge, which is admittedly limited in this area). Exfoliation, a process long recognized as the shaper of granitic domes and monoliths, is presently busting up the surface of a small dome at Twain Harte Lake a few miles east of the Mother Lode town of Sonora. The process has been captured on video, and is presently being monitored, due to the effects it is having on a reservoir abutment. 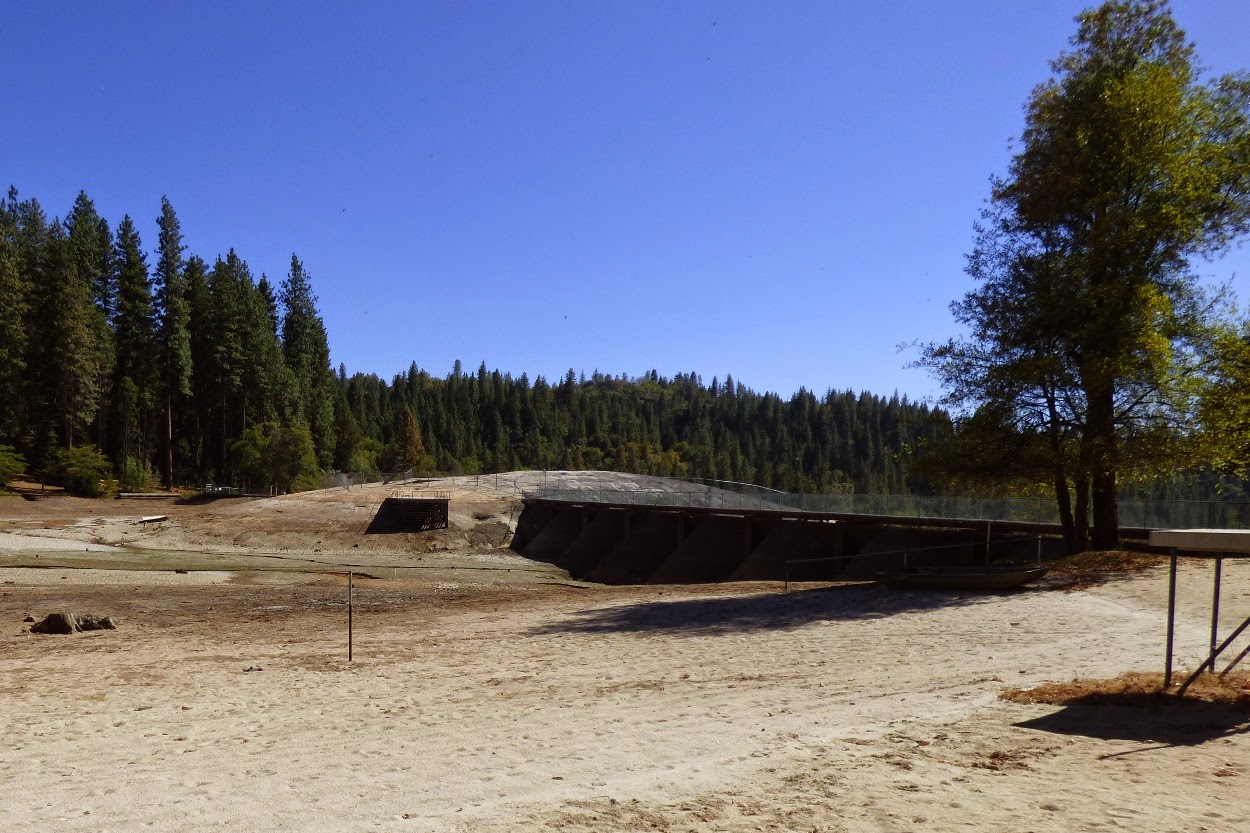 The event burst into the news in August when a possible dam failure warning was issued following a loud popping sound and the leakage of water from the edge of the reservoir. Once the site was investigated, a decision was reached to drain the lake until the full extent of the damage was clear. There have been at least three 'events', the last on August 3. 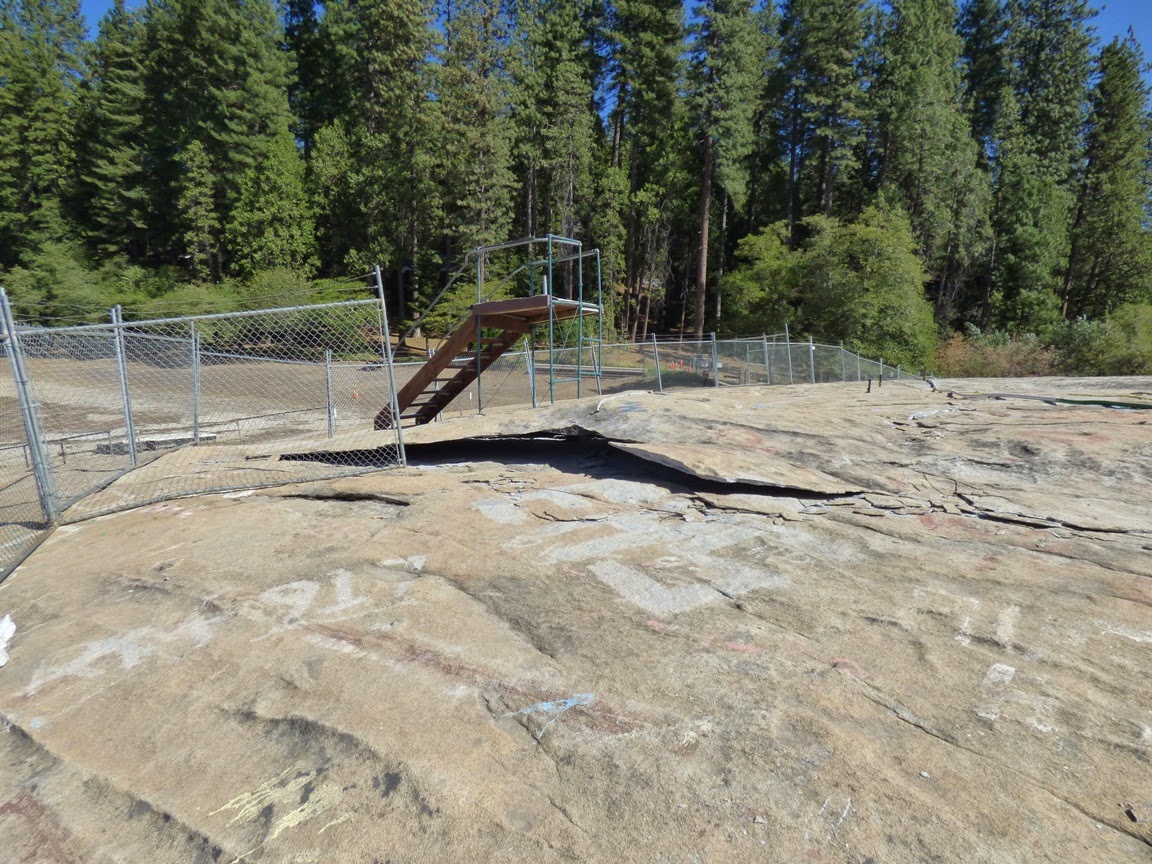 An employee of the lake association was very kind and allowed me to have a look at the dome and the new exfoliation shells. It was fascinating. The first thing to catch the eye was the lifeguard tower. It's tilted at an odd angle because the rock it is sitting on has been pushed upward into what is called an "A-tent" joint. My erudite and learned comment was "wow"! 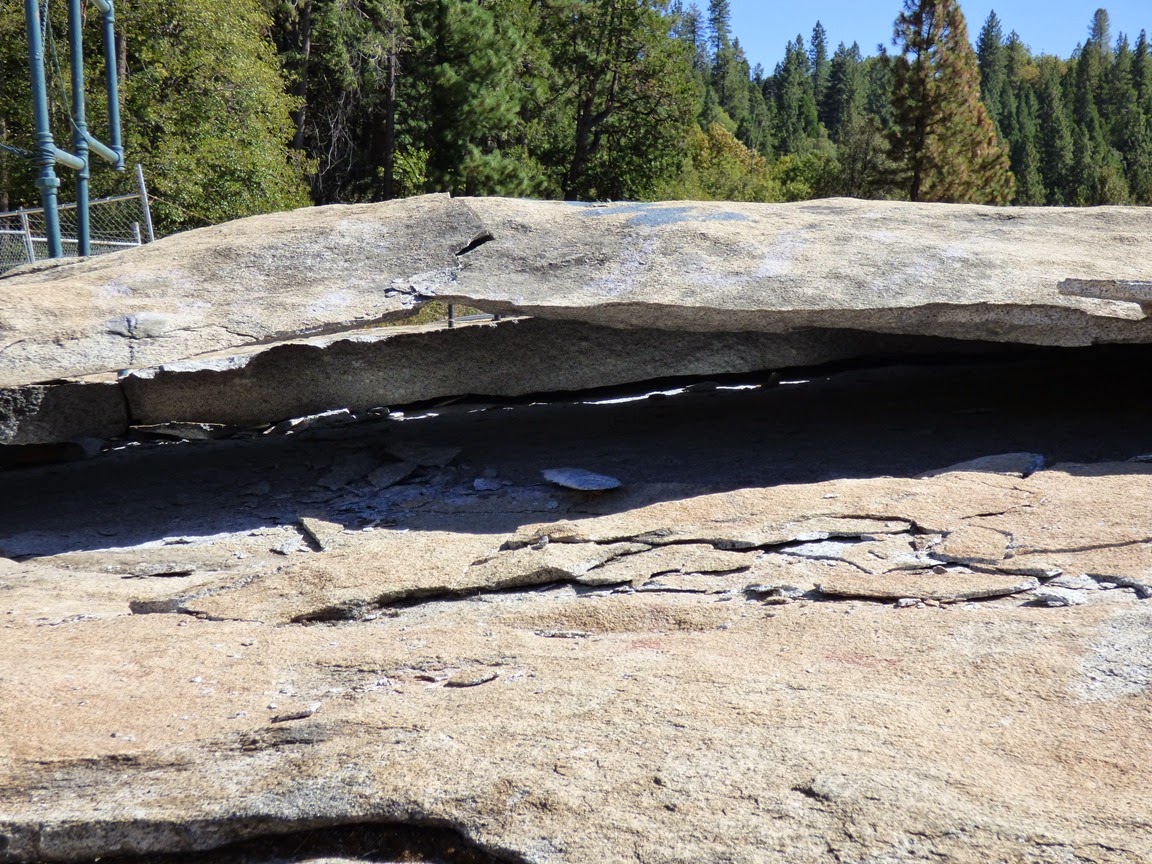 Exfoliation is the breaking and fracturing of hard rocks like granite in slabs parallel to the surface of the rock. It removes corners and edges, resulting in the familiar domes found in regions like the Sierra Nevada where lots of granitic rock is exposed. It has traditionally been described as the result of 'unloading', whereby erosion strips off the overlying rock, releasing pressure and causing the rock to expand outwards, and fracturing in the process. There are some alternate explanations involving a certain amount of compression, which makes sense looking at the 'A tent' in the picture above.

There were freshly loosened slabs all over the surface of the rock, with lots of chipped edges. From the videos it is clear that the chips often snapped loose before the major slab event, like foreshocks to an earthquake (and given that earthquakes are also an example of stress release, the analogy is appropriate). 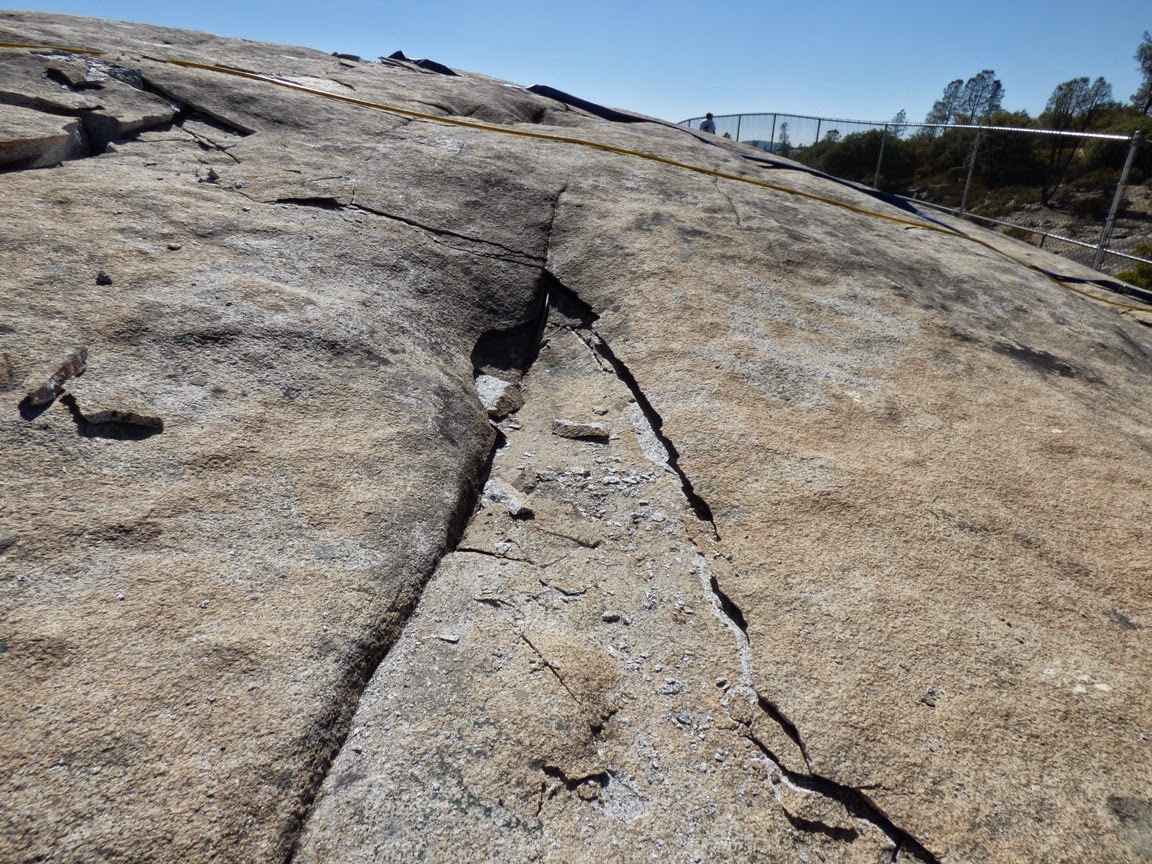 How incredible it must have been to see this happen! 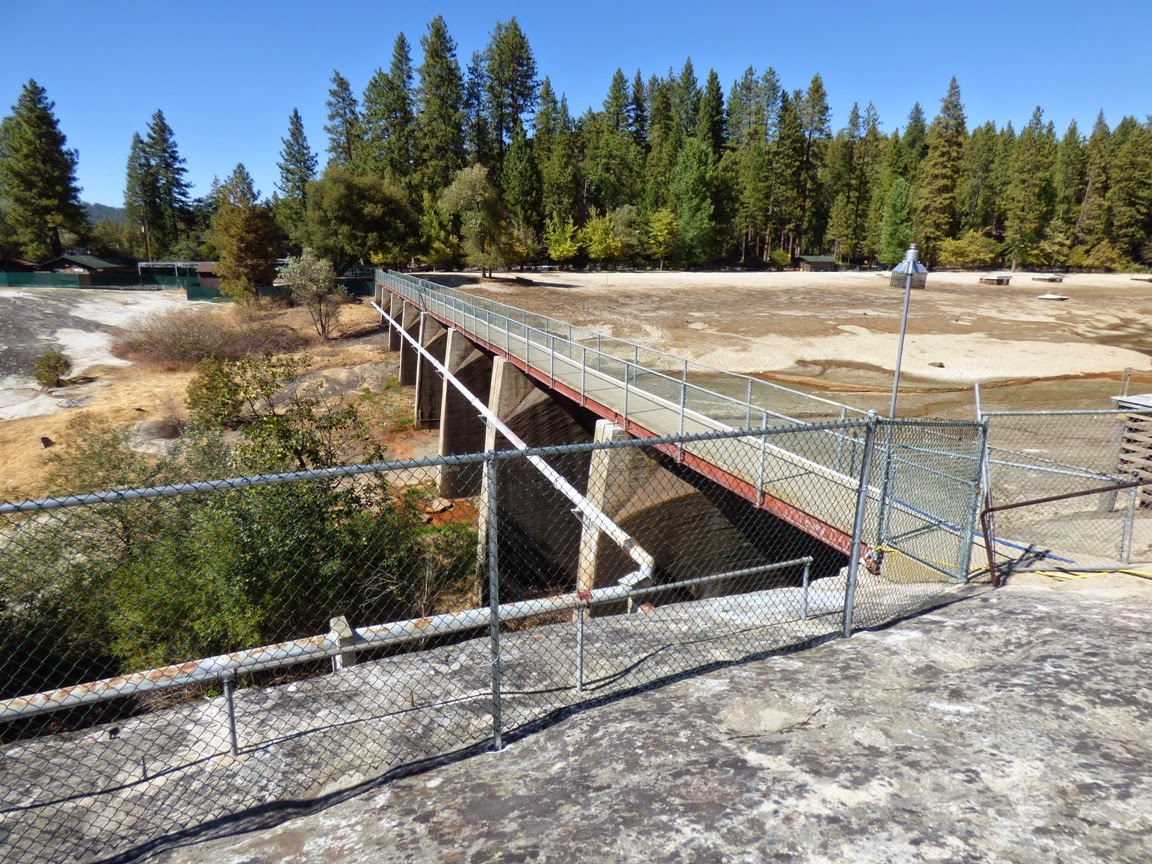 The worry, of course, is the proximity of the exfoliation slabs to the abutment of the dam. A geological consulting firm is monitoring the activity, with stress meters set up in several places. 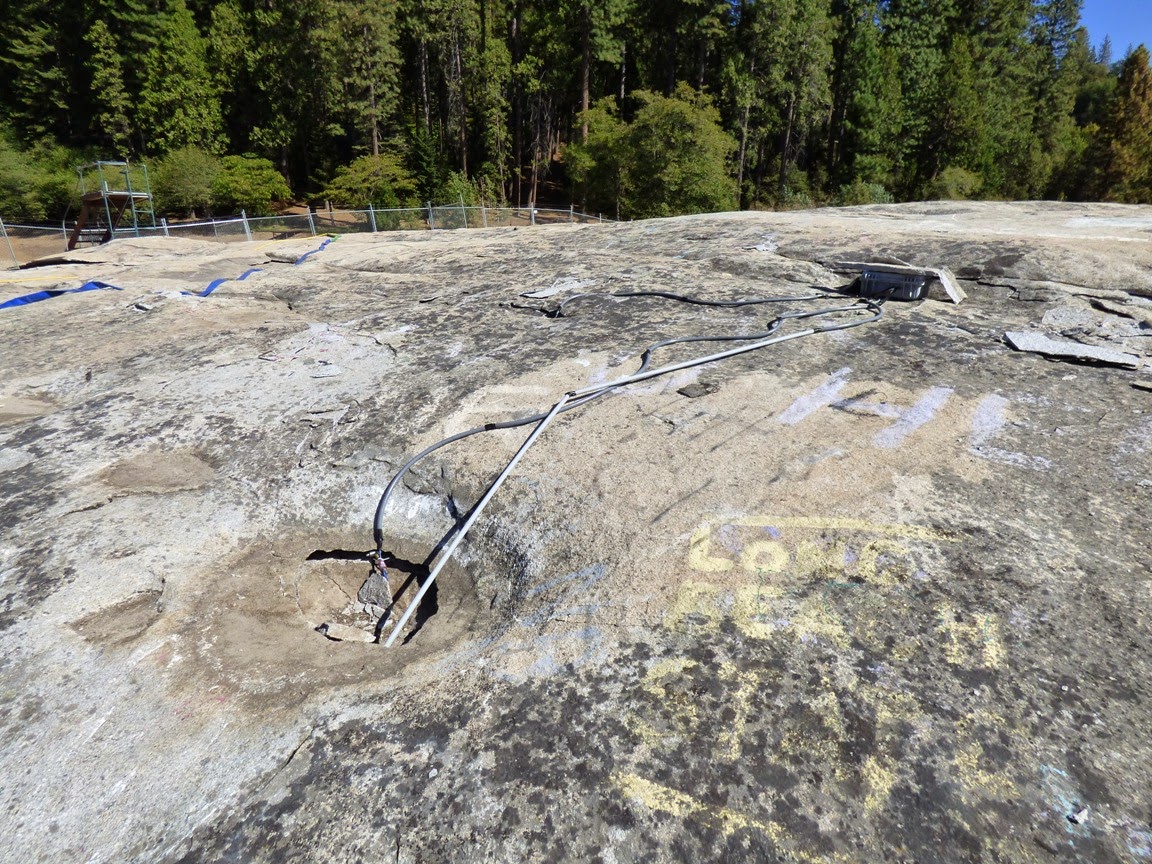 I admit I never gave it any thought, but it seems clear that the fractures are occurring in a swarm, as the stress regime changes with each break, placing new pressures in different sectors. Like a series of aftershocks following an earthquake, the rocks will continue to shatter for a period of time until a new stable regime or equilibrium is reached. I don't know any details of how or if this process has been witnessed in the past, so I couldn't even speculate on how long these rock 'pops' will continue. Maybe they are already done, but I wouldn't count on it. 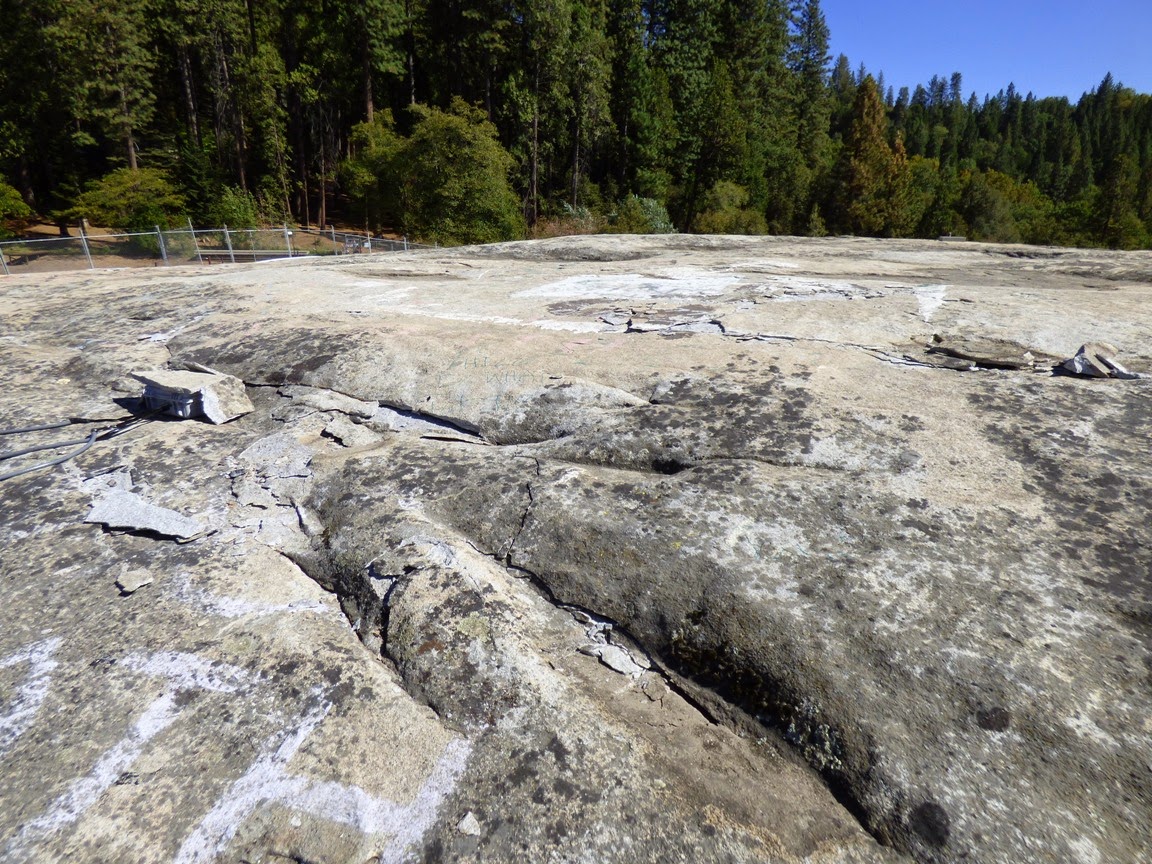 The picture below shows a series of fresh parallel fractures running perpendicular to the edge of the dam. 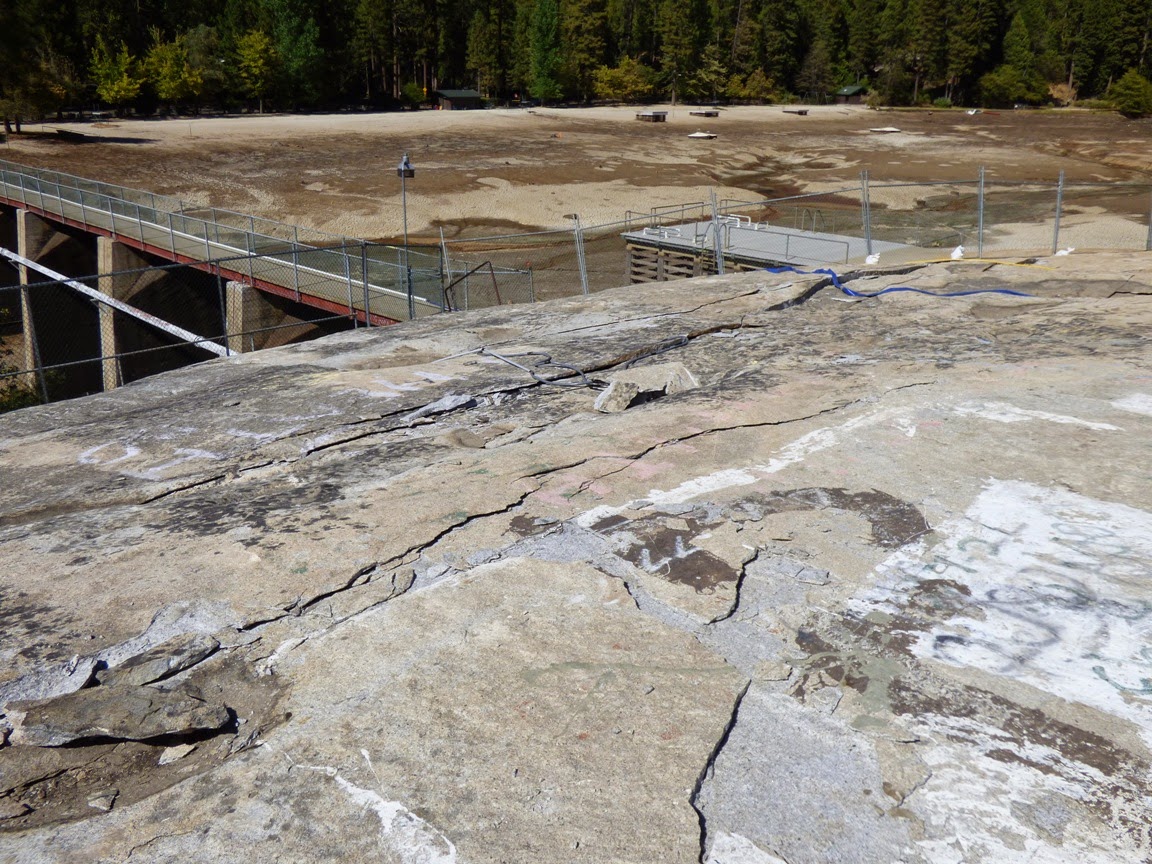 We took a closer look at the dam abutment. So far the damage is limited to the top few feet of the south margin of the dam. 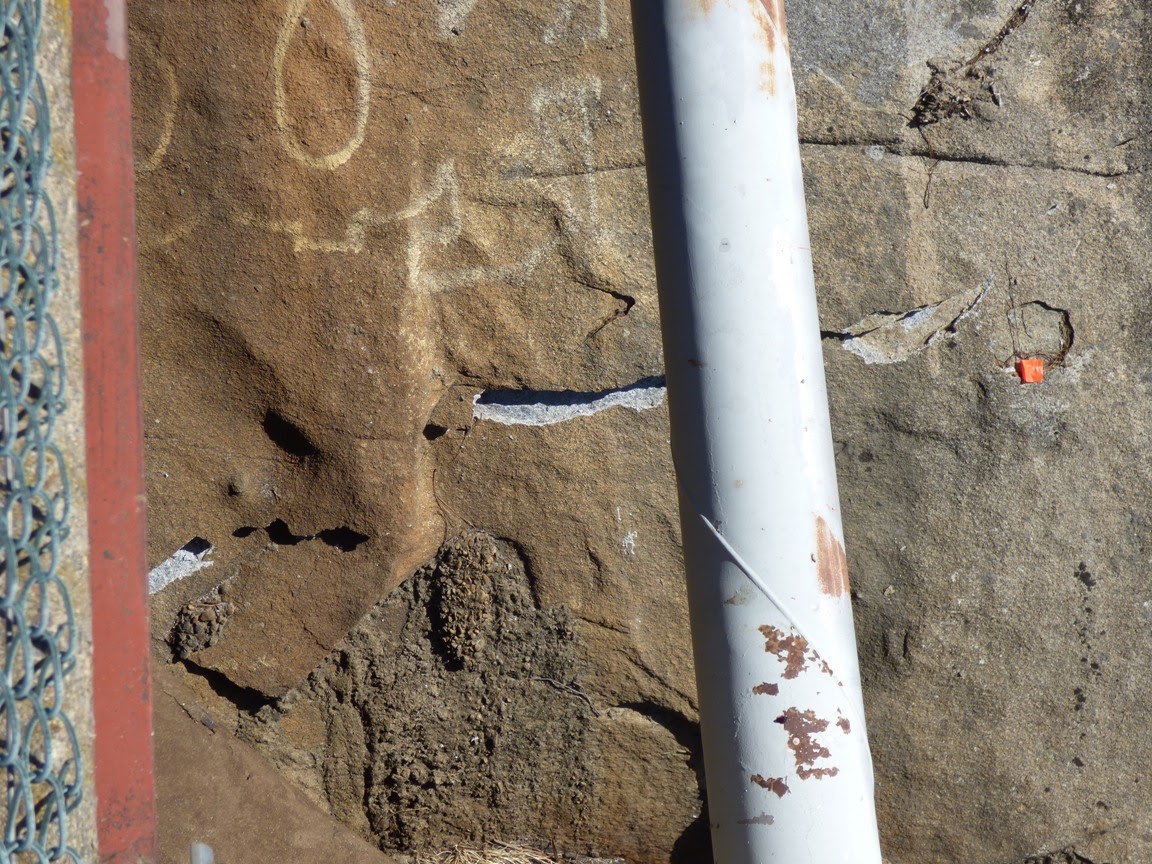 In the picture below we are looking down on the edge of the dam and on the left one can see the fresh exfoliation fracture. It leads into the dam abutment. 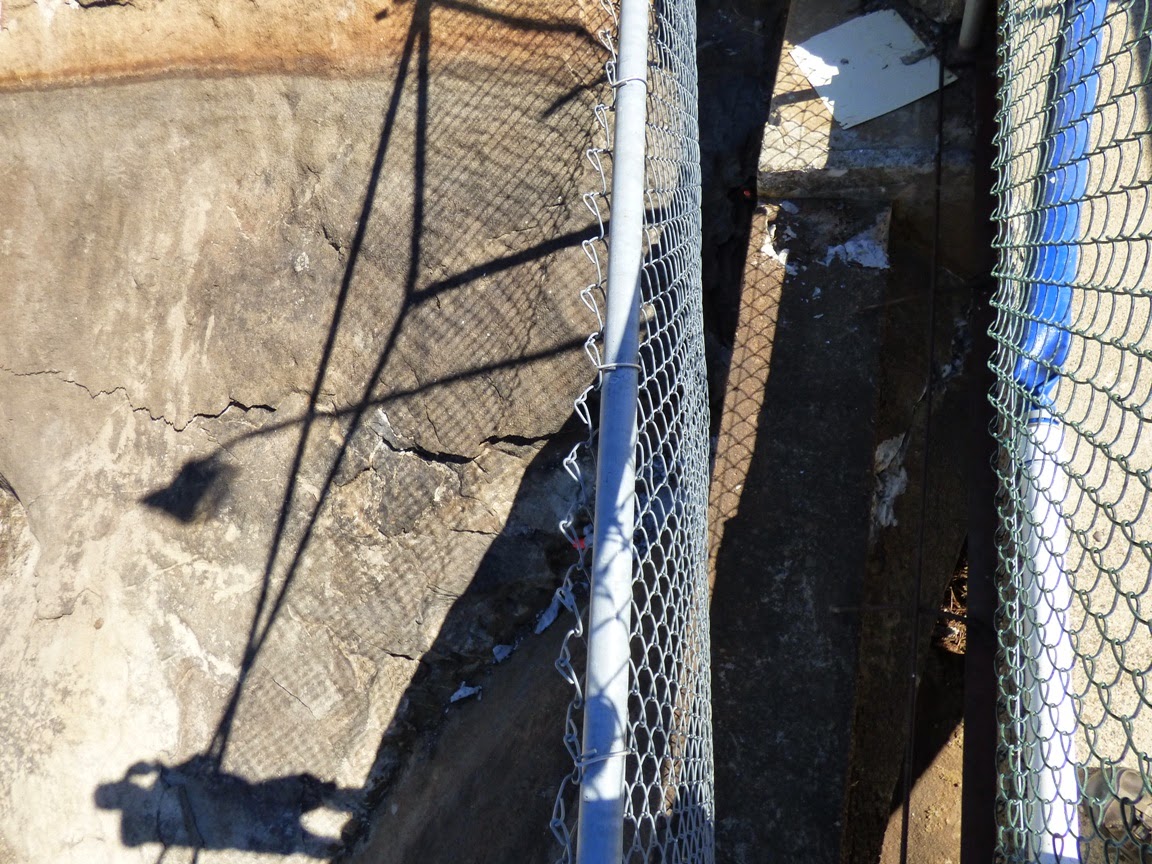 In this next picture, we are looking closer at the edge of the dam and can see a crack running through the concrete, going down about three feet or so. The dam is around 70 years old, and had been inspected only a few months prior with no signs of problems. 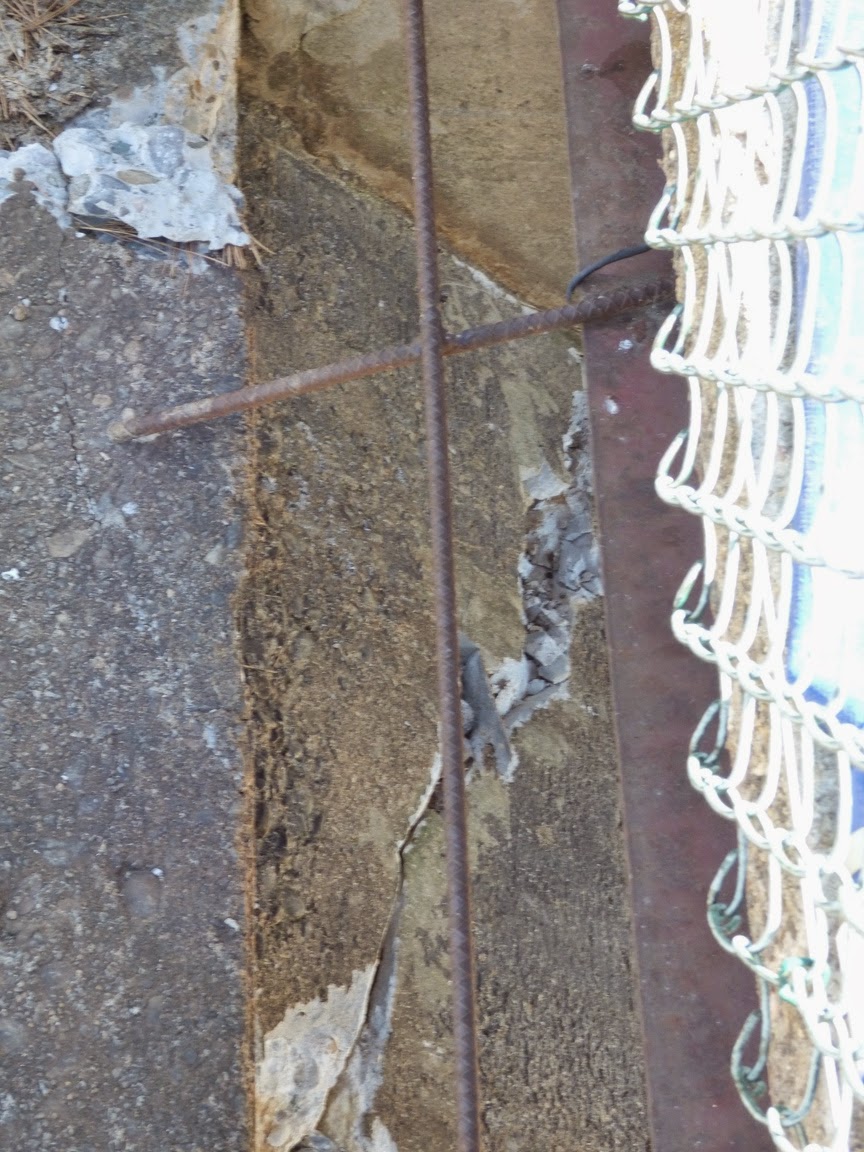 No one can say that the episode is over with, but it was fascinating to see. As I said before, I'm not aware of whether this process has been monitored in real time before, and I can't find any examples of exfoliation being captured in action on film or video, although it most assuredly is happening all the time somewhere in the world. If I hear of any developments, I will pass them on.
I certainly hope the good people of Twain Harte get their lake back. It looked pretty sad without any water. It is a popular swimming and fishing hole.

If you haven't seen the video, there are some very good ones on the web, courtesy of Condor Earth Technologies (click here for the link) and Dotysan, who is a local resident. Check them out!

THAT is too cool. Super interesting. DH had just told me the (Yosemite) park geologist was called out there to consult, and now you post about it. Pretty interesting stuff. Looking forward to your updates. =)

Fascinating - and worrisome when it might impact the dam! You must have been thrilled to see all the fractures and exfoliation processes. Very cool. Thanks for sharing the photos, video and explanations as well.

On a smaller-scale, the "East Quarry" area of Stone Mountain, GA is a good place to see the after-effects of ongoing exfoliation.

This may well be the coolest thing I see in the near future. Of course I seen many times the resluts of these processes, to see the process actually happening (even virtually) just makes my week.

My guess is it may have something to do with the normal amount of heavy ice which is located over the granite in winter, and without said ice these last few years (or reduced amounts) the load above it is not enough to keep pressure on the granite.

I was just here on 7/12/2015. It looks like they filled in a lot of the cracks with concrete. There wasn't much evidence of the exfoliation going on that I could see, though I could tell the rock looked different. My family's been going to Twain Harte for years and the rock looked more angular than in seasons past.

It's funny, I was standing on the rock looking at an unweathered patch of the granitic rock, (the rock has been covered with graffiti for years and years so seeing a big patch of fresh rock and no graffiti was strange), and thought "I wonder if this rock every slabs off?" I now know that it does, and in spectacular fashion.