Northern Convergence: A Different Kind of Convergence More Than a Century Ago in Craigellachie 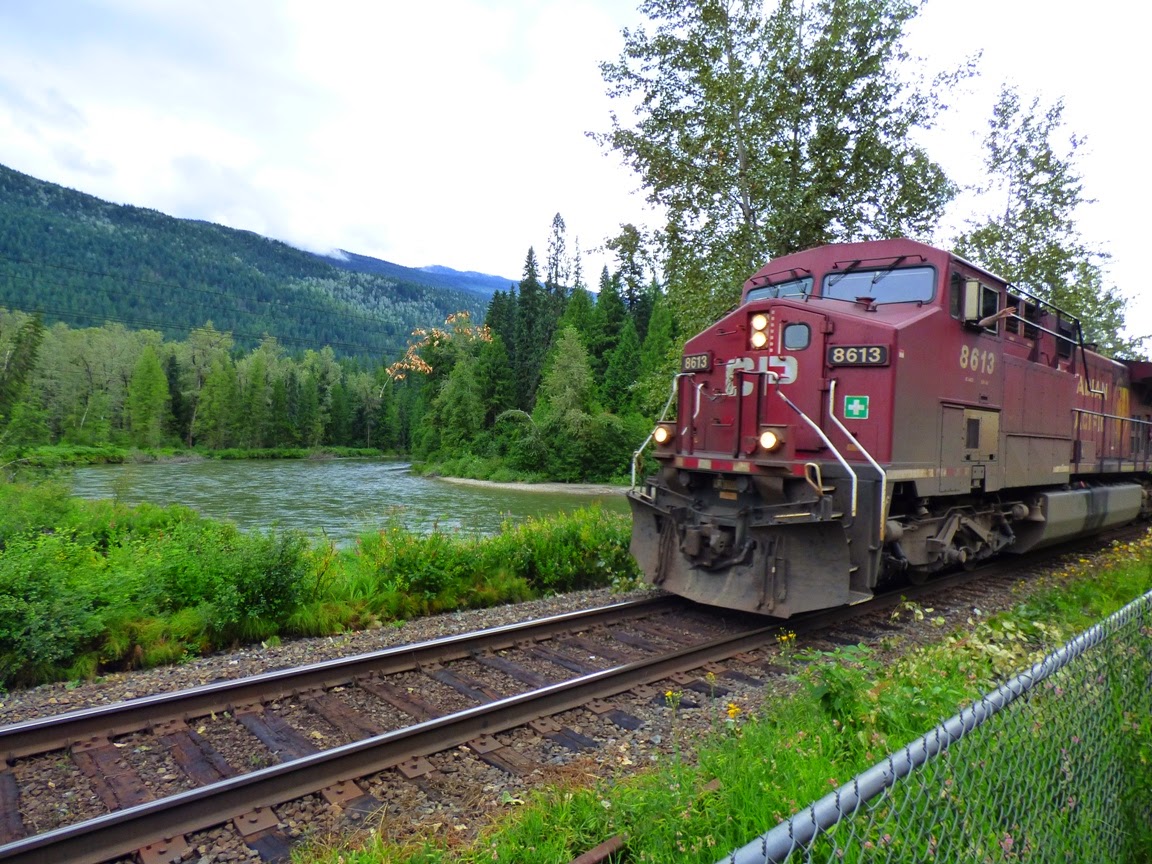 As we crossed the mountains of British Columbia on our geological journey through western Canada, I was becoming aware that whenever we stopped I seem to hear trains in the distance. It makes sense; in mountainous country, highways tend to follow railways, which were sometimes constructed along ancient trails, which followed the gentlest passes. Railways had a somewhat special role in the settlement and development of North America. Completion of the railway across the United States, culminating in the ceremony of the golden spike at Promontory Summit, Utah in 1869 transformed travel across the country. It turned overnight from an arduous dangerous journey of months by horse, oxen, and foot, to a comfortable ride of several days.

The construction of the transcontinental railroad was a huge accomplishment, crossing the prairies, the Rocky Mountains, and Great Basin, and the Sierra Nevada. It was one of the more significant events in U.S. history. But on our journey through Canada, I began to wonder if there hadn't been an even more impressive event north of the border. 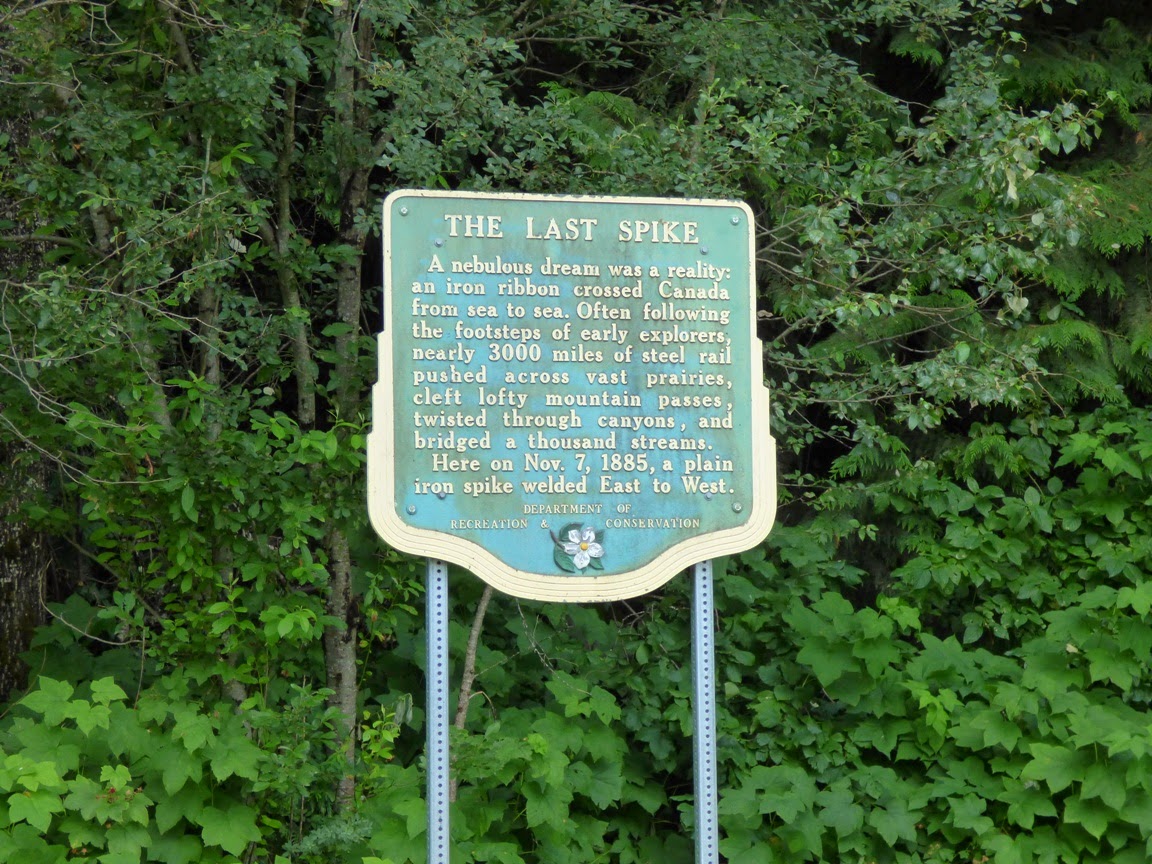 We pulled into Craigellachie at the border of the Shuswap Highlands and Monashee Mountains. We were visiting the small park commemorating the driving of the last spike of the Canadian Pacific Railroad in 1885. Having just come through hundreds of kilometers of rugged mountainous terrain, we could understand why the "last spike" was so far to the west. The explorations and route planning of the architects of the railway must have been challenging to say the least.  For one, there was the winter. Many of the high passes presented special challenges from avalanches, or spring flooding in the river canyons. Farther to the east, the railroad had to pass through kilometer after kilometer of muskeg, the soft spongy swamplands of near-Arctic landscapes. 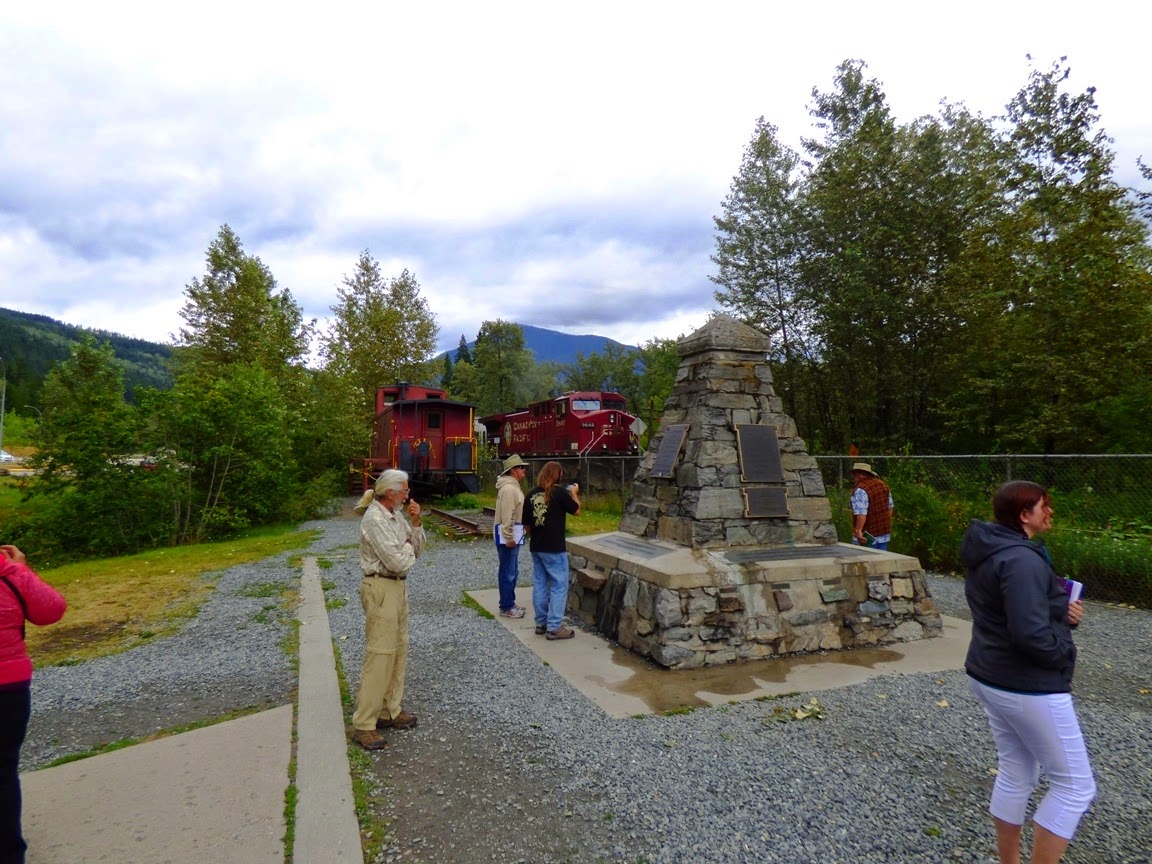 A monument to the last spike was erected at the centennial in 1985. We noticed that there is no lack of activity on the rail line, as at least five trains barreled through during our short visit (including the one above; the picture doesn't give the sense of motion, but it was moving fast). 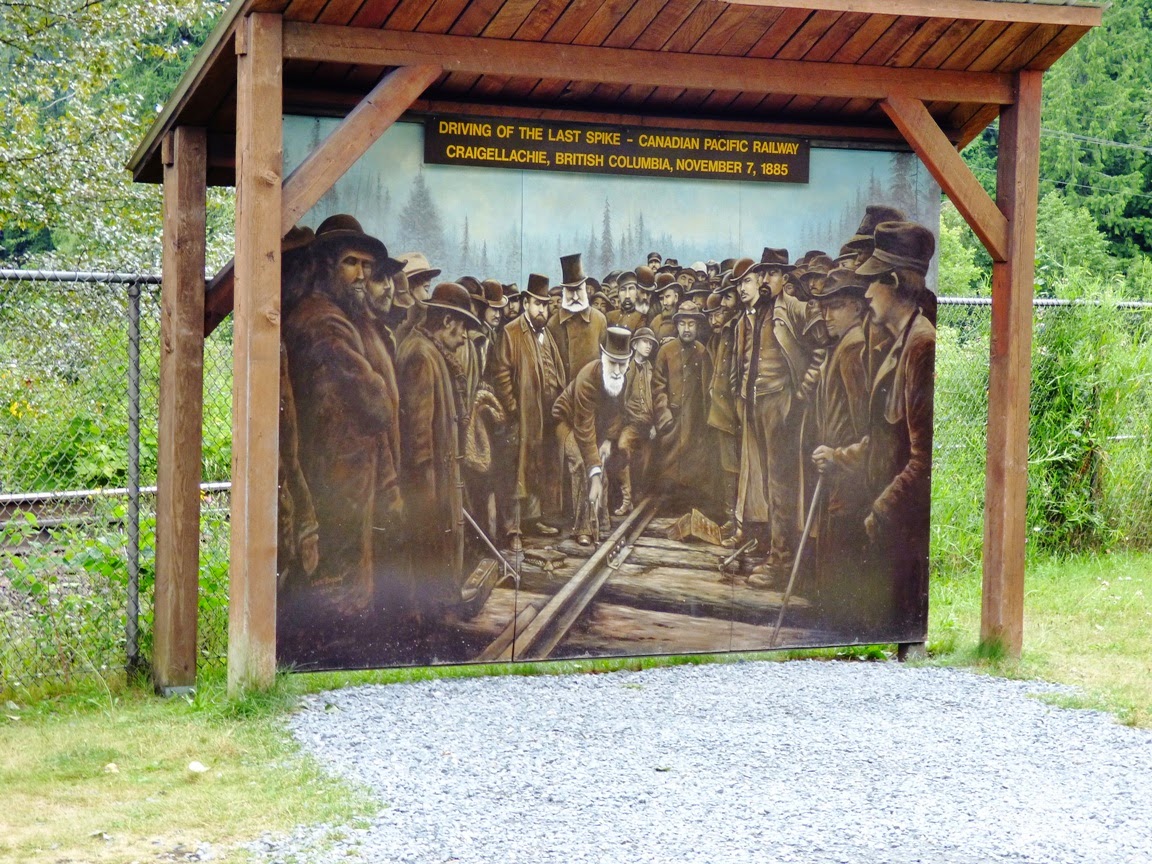 I couldn't help but notice in the commemorative painting of the driving of the last spike that the person driving the spike was a dignitary who I suspect had rarely lifted a hammer in his life. It's not that I bear any animosity towards him (his name was Douglas Smith, a main financial backer of the railway), and in fact he was quite a philanthropist. But why is it that the dignitaries always get to shovel the first bit of dirt on a major project, and then let thousands of hard-working and hard-living workers (the "navvies") struggle for years to complete the project? Then, when the job is done, they come back and pretend to do a hard thing like driving the last stake? I guess it would be too much trouble to remember the names of the navvies, especially the ones who gave their lives in the service of the railways. 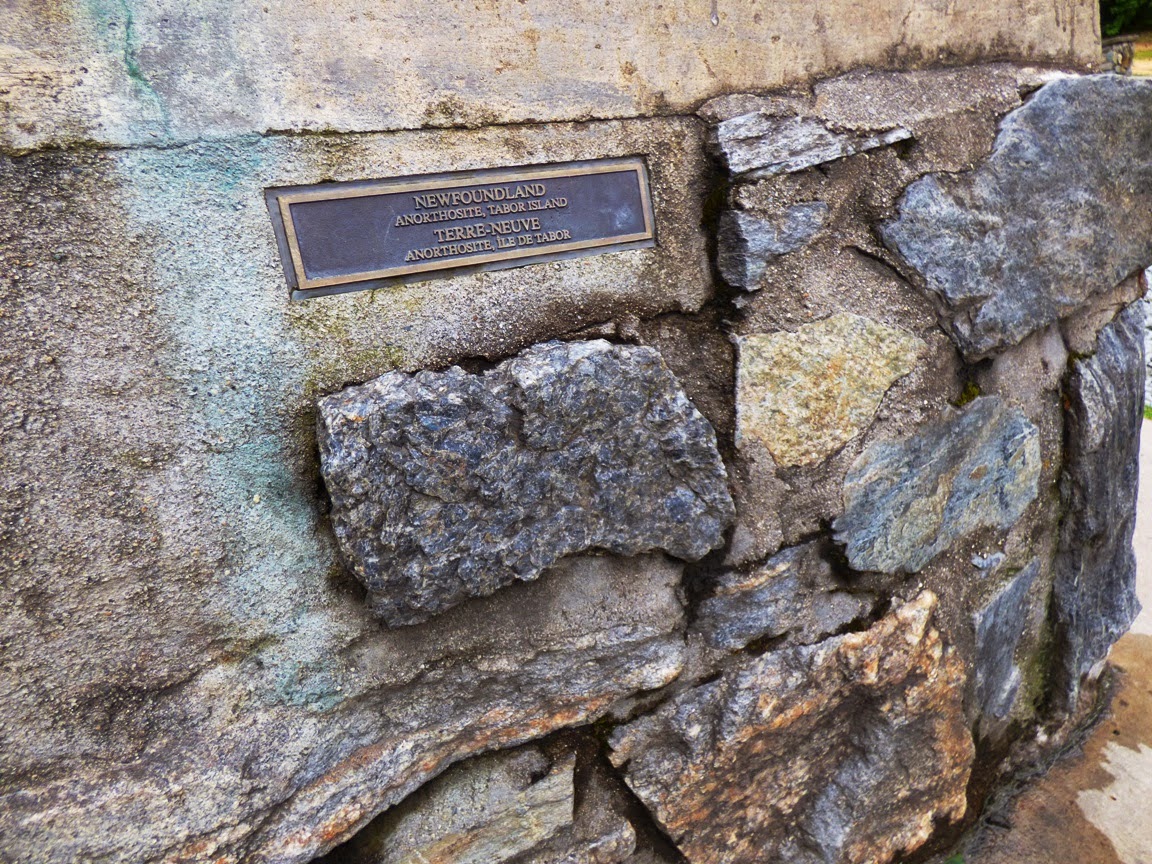 The centennial monument had something interesting on the flanks: representative rock samples from each of the Canadian Provinces. Above is a piece of anorthosite from Newfoundland. Anorthosite, a plutonic rock containing a large proportion of plagioclase feldspar and a few dark minerals, is known mostly from very ancient rocks, generally a billion years or older. It was also found on the Moon, making up the lunar highlands. 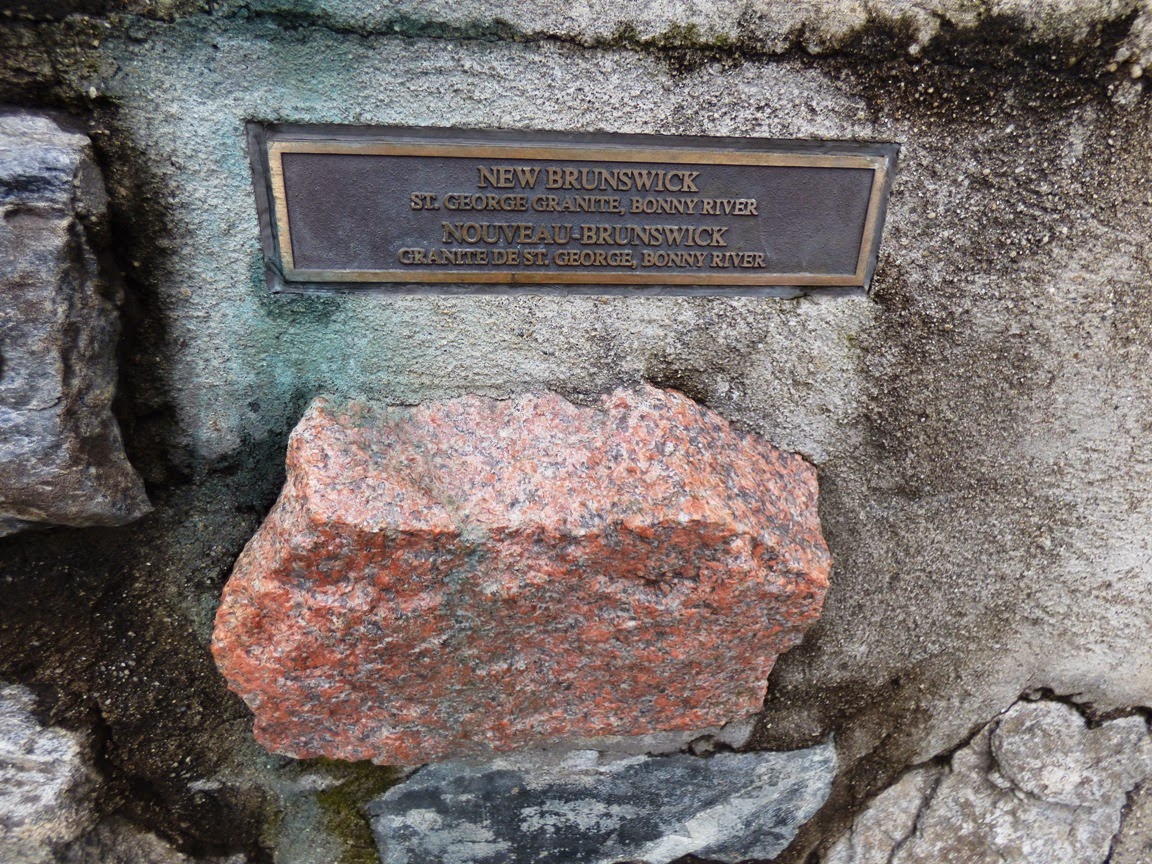 The Saint George granite out of New Brunswick is another plutonic rock that apparently is an excellent construction stone that has been quarried for years. It is Devonian in age, about 380 million years old. 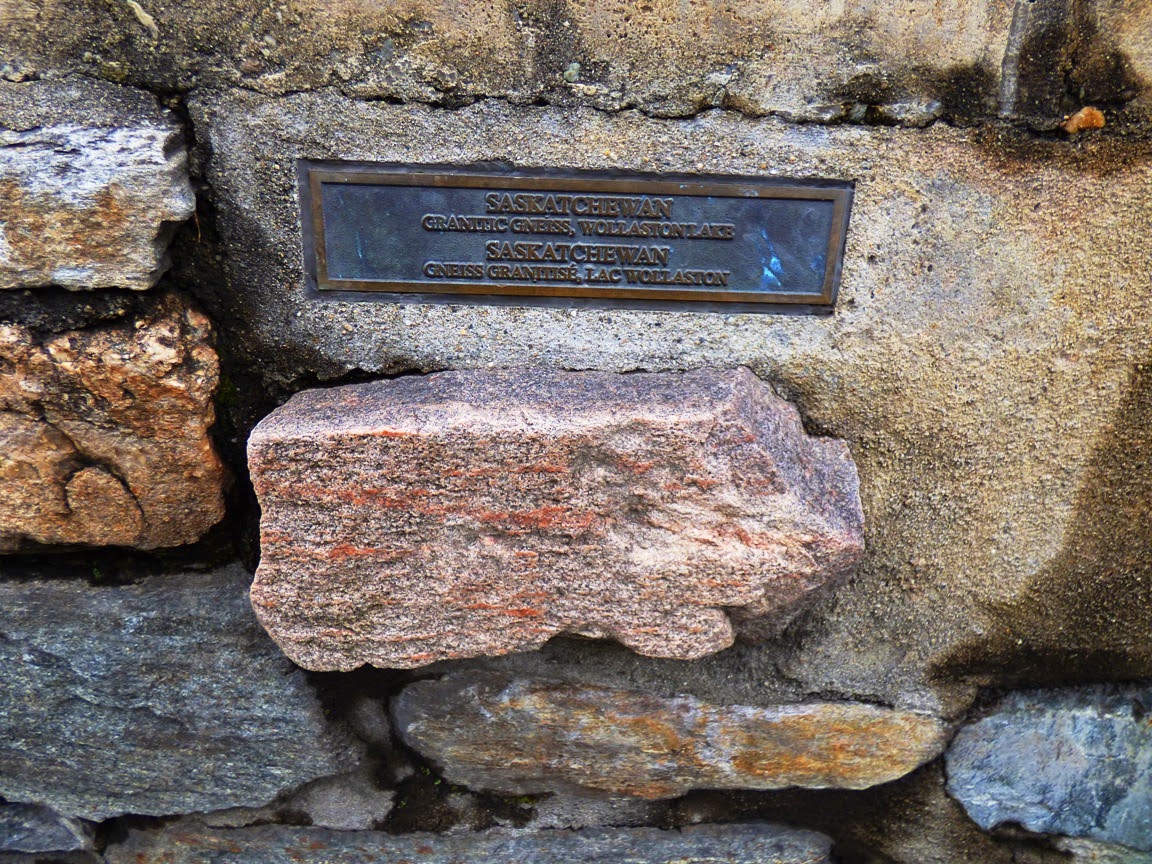 The granitic gneiss from Wollaston Lake in Saskatchewan is an ancient rock, around two billion years old. The region has produced uranium. 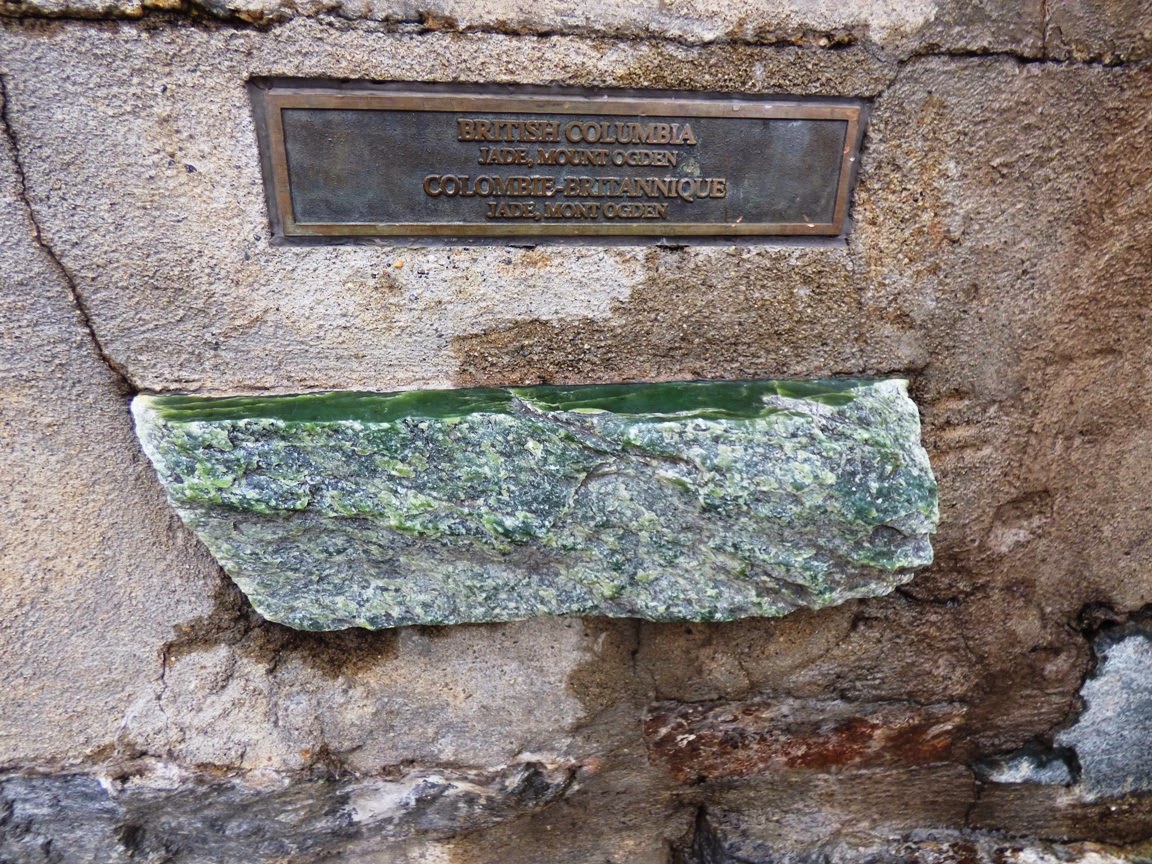 British Columbia provided a chunk of jade from Mount Ogden. The jade is representative of rocks that formed in a convergent plate setting under great compressive stresses. Jade is of course valuable as a semi-precious gemstone. The outcrops are associated with exposures of serpentinite, a rock we are familiar with back home in California. 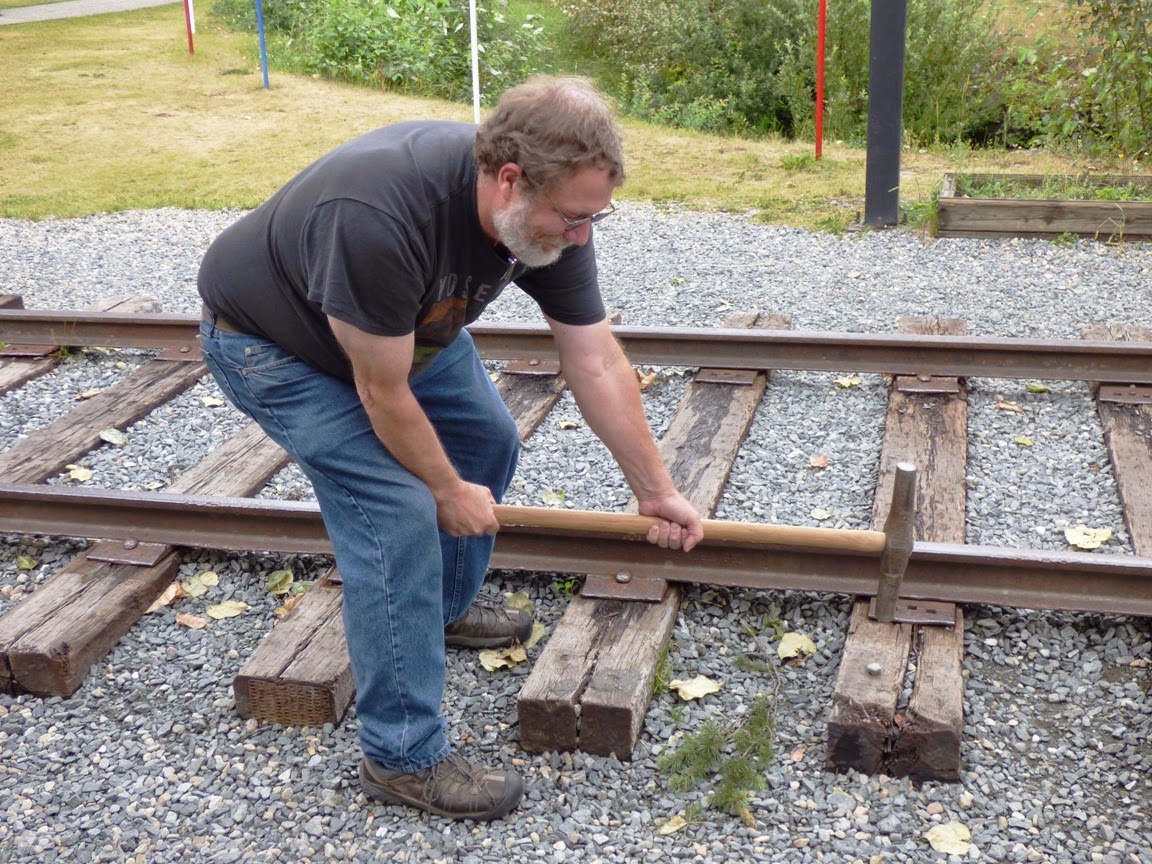 The visitor center offered up a chance to pound stakes into a railway, though I had more fun using their equipment as a rock hammer...

One of my favorite songwriters of all time, Gordon Lightfoot, wrote a song commemorating the centennial of the building of the railway, the Canadian Railroad Trilogy (the first stanza is quoted above). I like how he honored the navvies, those who did the actual work (the song was the first place I ever came across the word). Here is a YouTube of his performance of the song in Reno in 2000. Enjoy!

We are the navvies who work upon the railway
Swingin' our hammers in the bright blazin' sun
Livin' on stew and drinkin' bad whiskey
Bendin' our old backs 'til the long days are done
Posted by Garry Hayes at 12:57 AM

My first encounter with the term "navvie" was also in a song; Towers of London by XTC. http://www.metrolyrics.com/towers-of-london-lyrics-xtc.html

Wonderful post - I have been by this monument, and it was lovely to revisit it through your geological eyes! And Lightfoot's song is one of my favourites! Heard him sing it in person, and it pulled us all together in singing along. Cheers.