Northern Convergence: Moving Pictures of the Canadian Wilderness, from Whistler to Lillooet 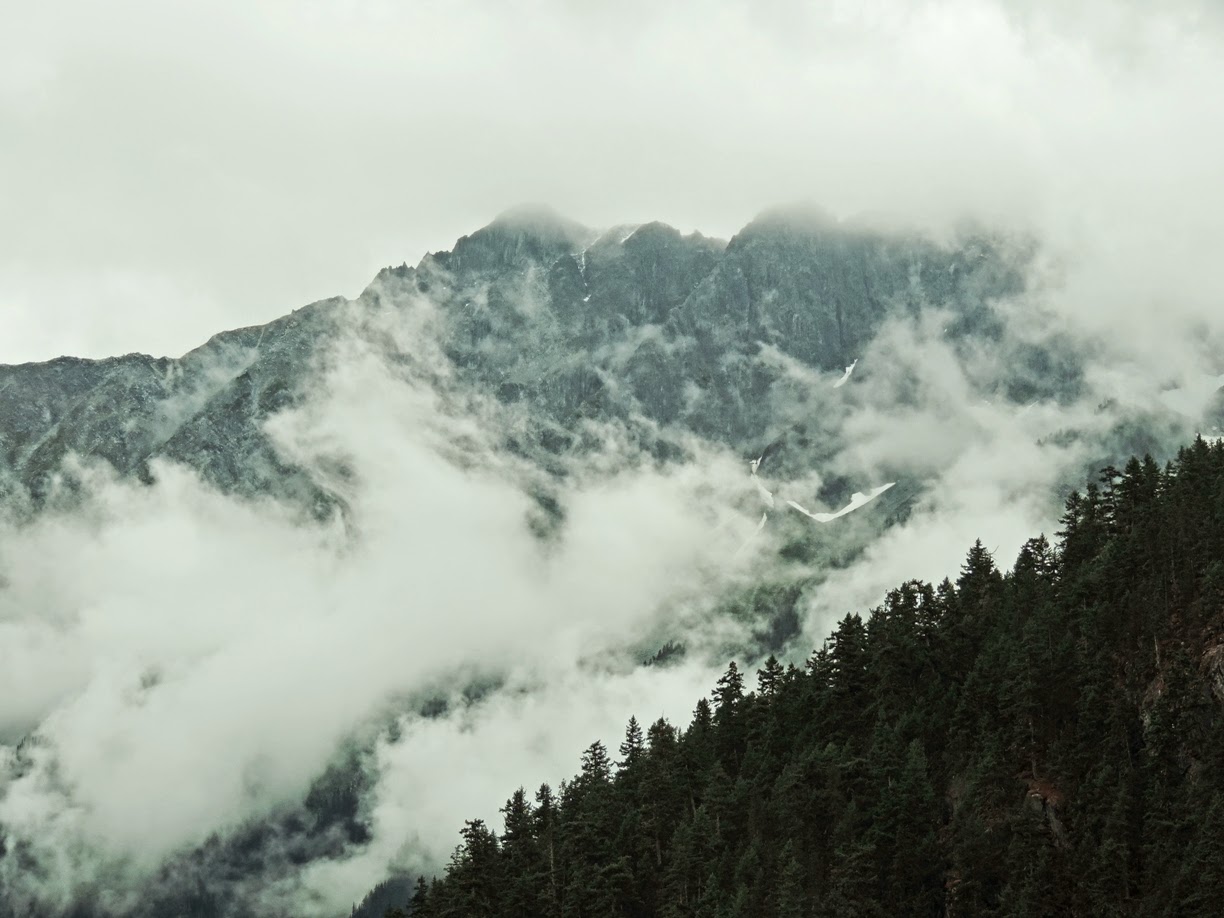 I PROMISE to reveal the origin of yesterday's mystery picture SOON! In the very next post, in fact, barring any major earthquakes in Northern California, or other major geologic distractions. It's just that I value continuity and order...I wrote about our journey up the Sea to the Sky Highway yesterday as well, and I complained mildly about the rainstorm and overcast conditions that prevented us from seeing the mountains of the Coast Belt. I was looking at my photographs, and from Whistler to our next stop at Lillooet I didn't take any pictures. I was driving after all, and we weren't able to stop, due to a tight schedule. There was a good 120 kilometers of what I recall was a pretty spectacular drive through the Coast Mountains and the Cadwellder Range. 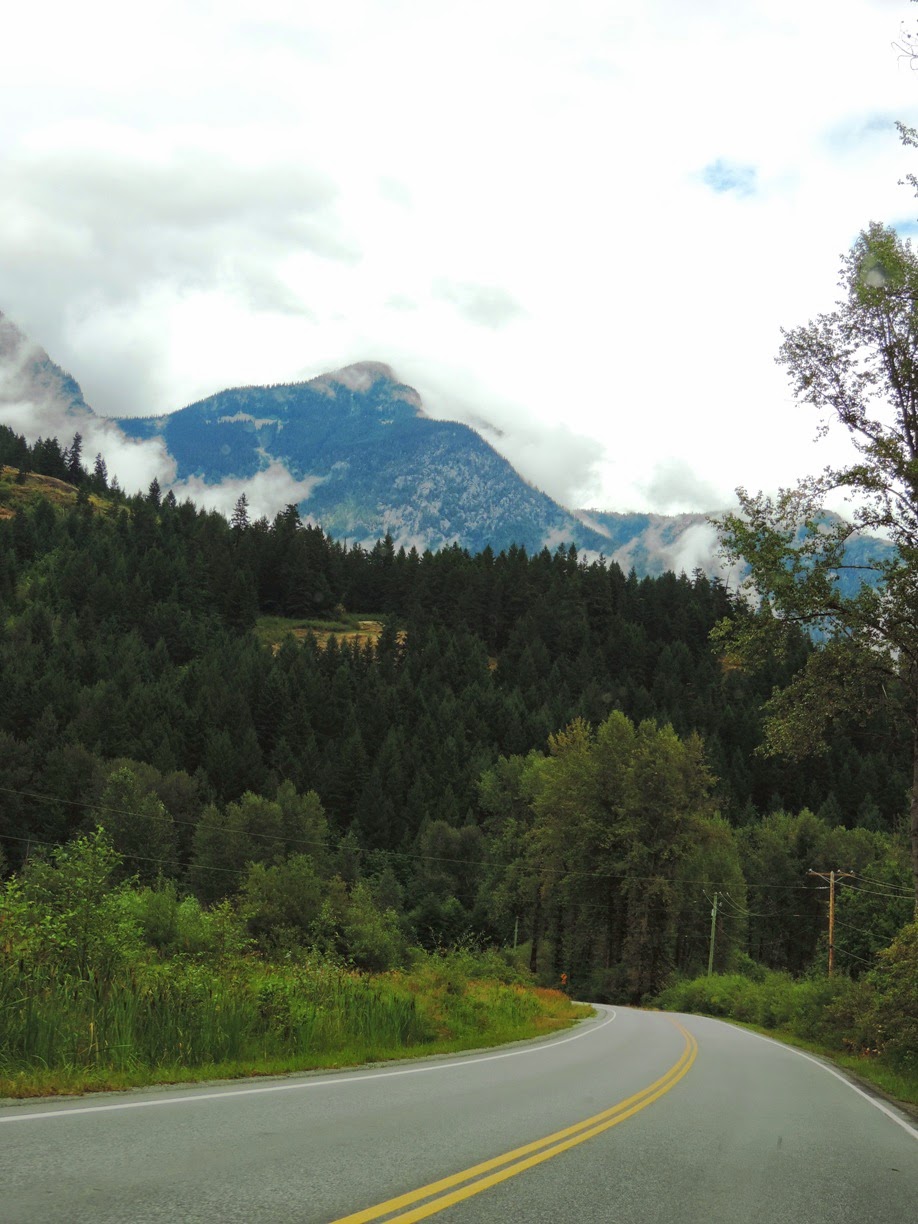 What I forgot is that Mrs. Geotripper was next to me snapping picture after picture as we sped around curves and over passes. I went over to her photo files and found a wonderful record of "moving pictures". Moving pictures can mean "movie", or "emotionally striking", or "taken from a moving car". In this case the term today refers to the third meaning, with a smattering of the second. The drive was just stunning. 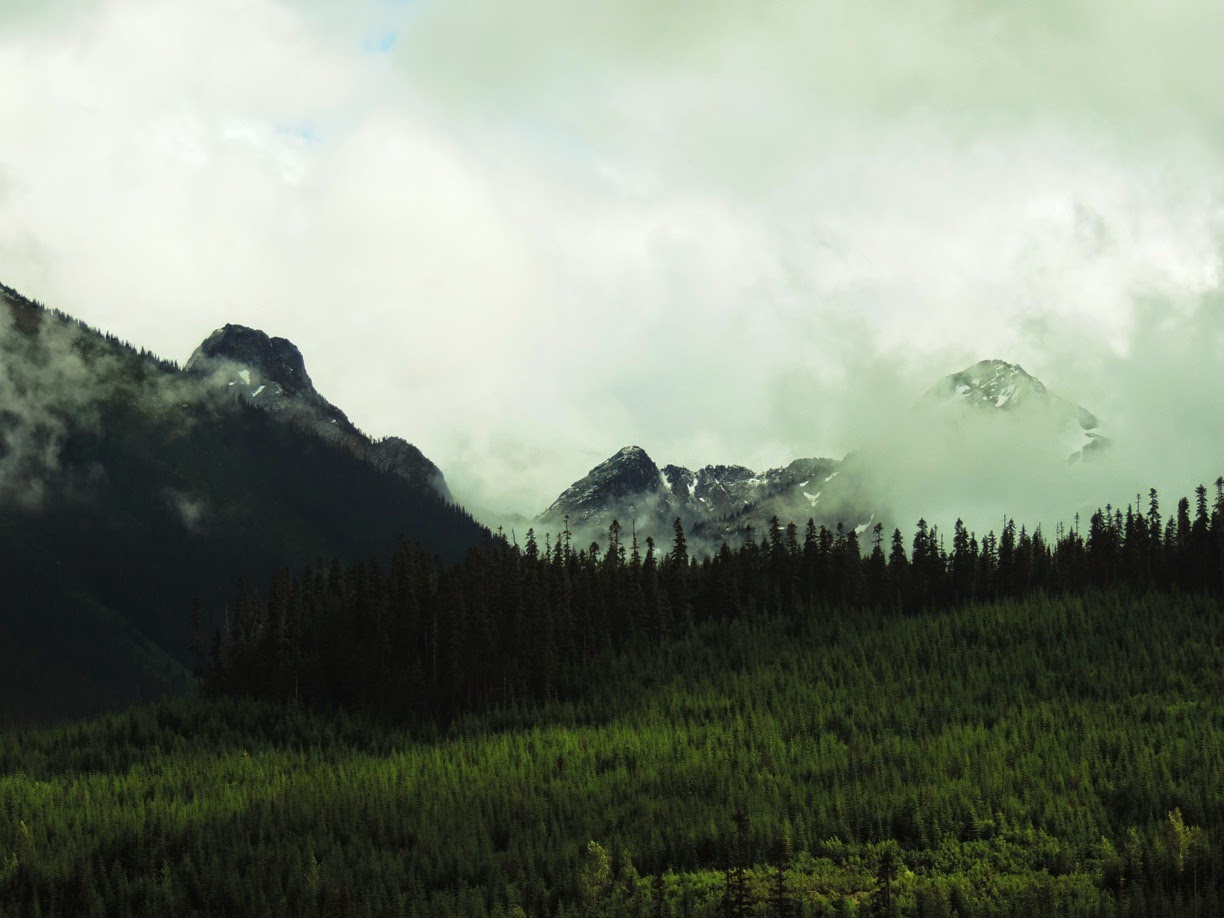 The Coastal Belt mountains, as described in the previous posts, are composed largely of Mesozoic granitic plutons that intruded into older metamorphic rocks of exotic terranes, tracts of crust that were shuffled about the Pacific Ocean and ultimately slammed into the west coast of North America ("Slammed" in the geologic sense, of course. The terranes were moving a few inches a year). 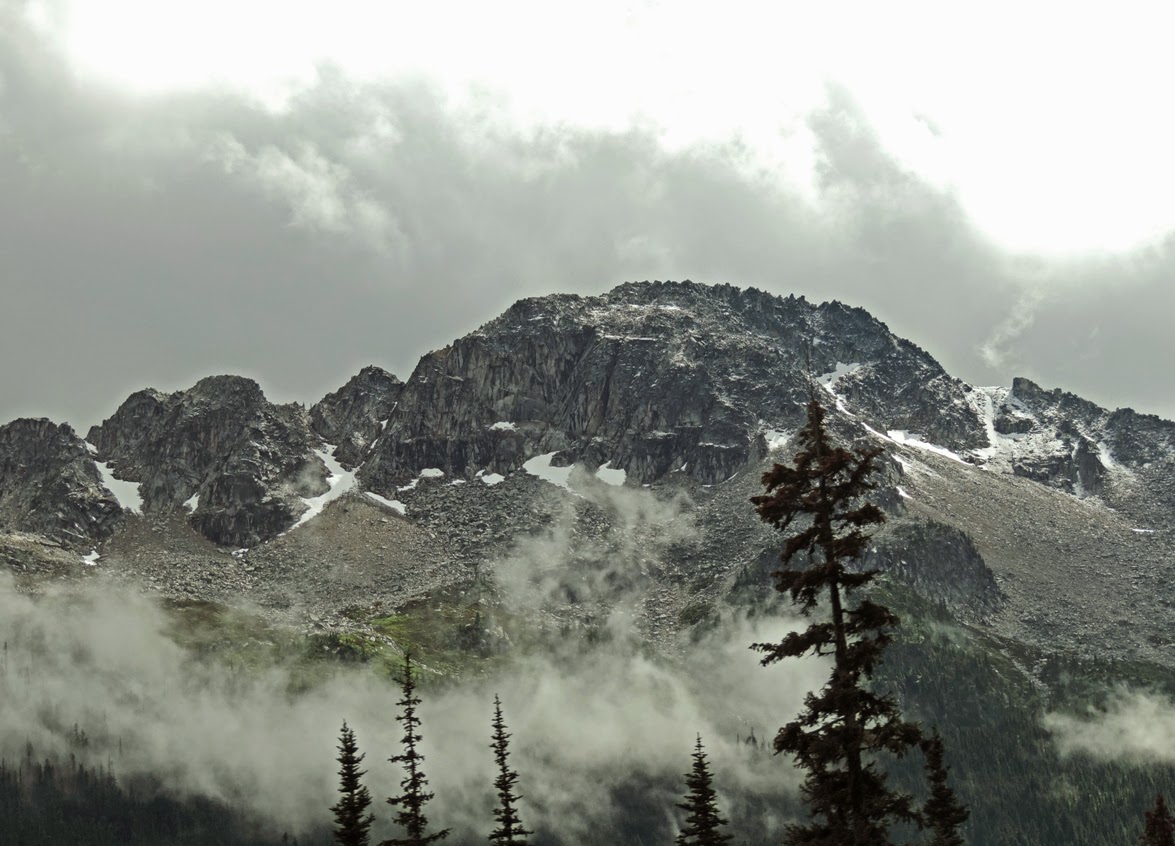 As we passed beyond Whistler and Pemberton, we emerged into the "rain shadow" side of the mountains, and the storm that had caused us so much frustration in the morning had begun to break up. Like a feather boa dancer, the clouds revealed little bits of the high mountain ridges, and then just a little bit more. We started to see patches of blue sky, and then the long-forgotten sun appeared. 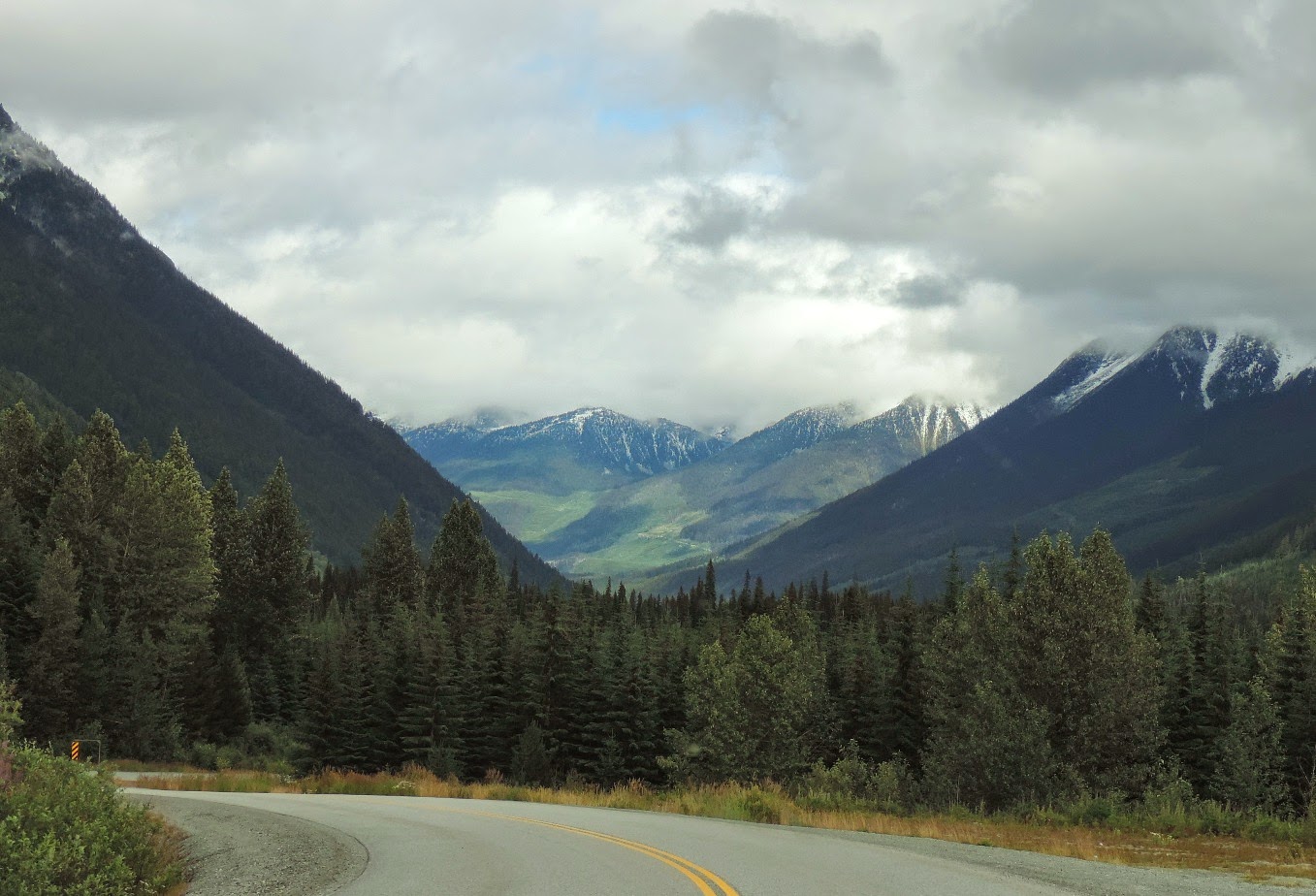 Evidence of glaciation was everywhere, from the horns, aretes, and cirques of the high peaks to the deep U-shaped valleys. As we moved east, the canyons became deeper and more rugged. I'm hard put to recall a more dramatic highway (except for later on the same trip!). For sixty miles or more we followed the highway, seeing almost no other travelers, and not a single settlement or other evidence of human activity. It was the kind of road that looked blank on the maps during the trip planning process, but which just begged for a stop here and there to look at the rocks. But we had an appointment down the road. We drove on. The high ridges of Mt. Brew became visible, and we switchbacked down into a dramatic valley containing Cayoosh Creek and Seton Lake. In the distance we could see the valley was blocked by the massive Fountain Ridge. It's sort of unusual for a glacial valley to make a ninety degree turn unless something really forced it to do so. In this case it was a major fault line, the Yalakom fault, which forced the original rivers to change direction, and the glaciers followed suit. The fault was active in late Cretaceous and early Paleogene time, around 65 million years ago. It must have startled more than a few dinosaurs... 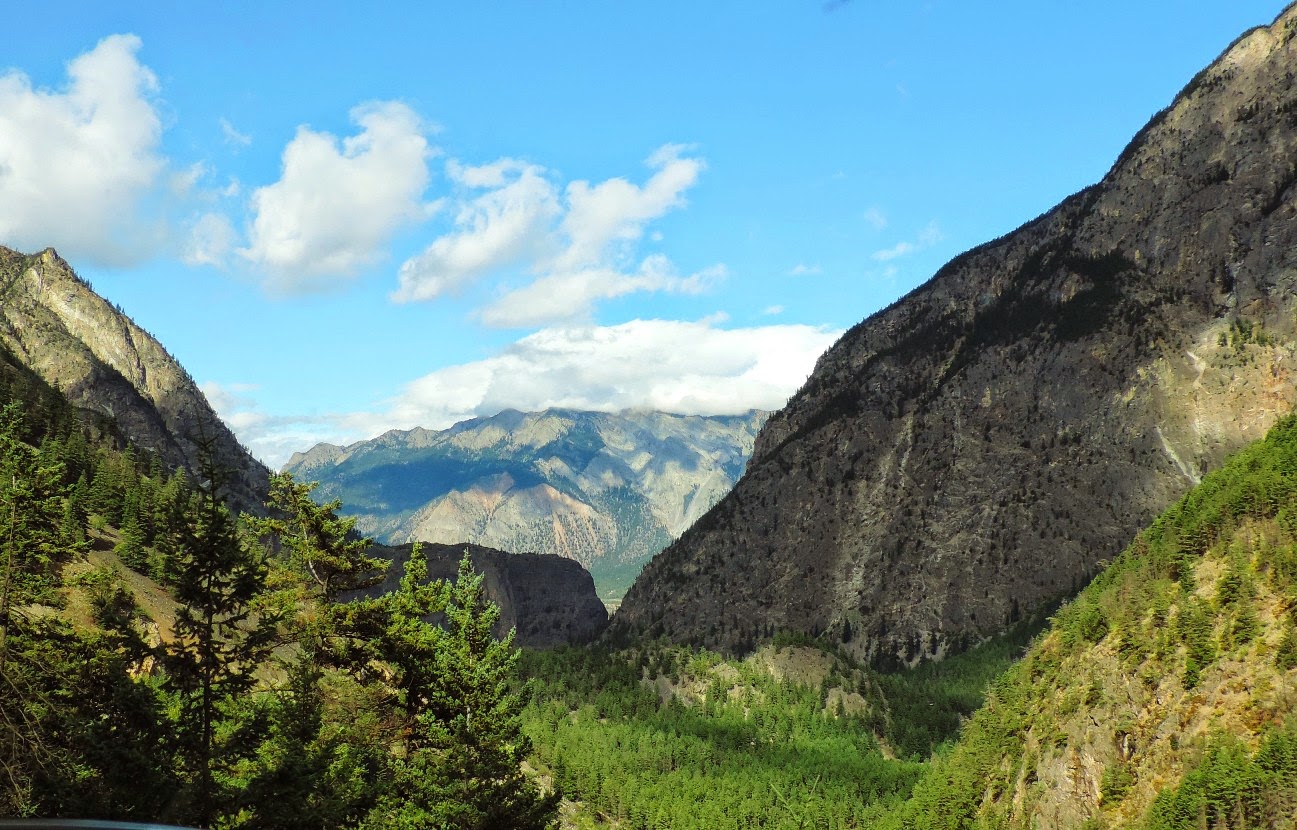 There were a few more sharp turns beneath hulking masses of rock, and we rolled into the deep valley of the Fraser and the small village of Lillooet. The town has room to exist only because of terraces that lie high above the river. These terraces are the result of sediments backing up behind gigantic landslides into the Fraser River a few thousand years ago. 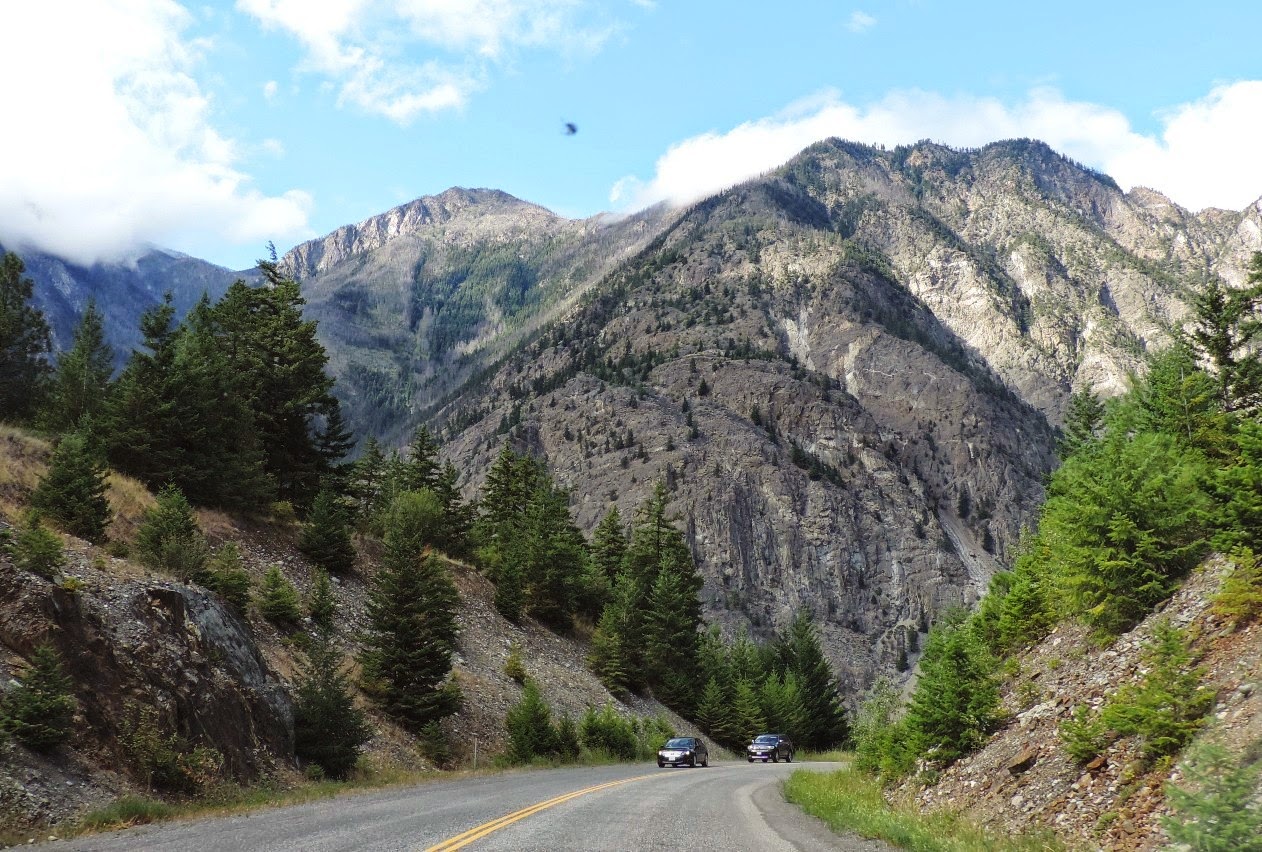 We arrived at our appointment, which just happened to be the place where our mystery photo was taken! More on that in the next post.

And thank you, Mrs. Geotripper, for the wonderful pictures! Pretty good for a photographer who was trapped in a speeding car...
Posted by Garry Hayes at 3:31 PM

Just read this post... now I know it must be pit houses. Is it a picture of Keatley Creek?

It's the Bridge River site. Not many people in Lillooet, and even fewer who read Geotripper! Thanks for commenting!