Here We Go Again: Yellowstone is Going to KILL US ALL! Wait a minute... 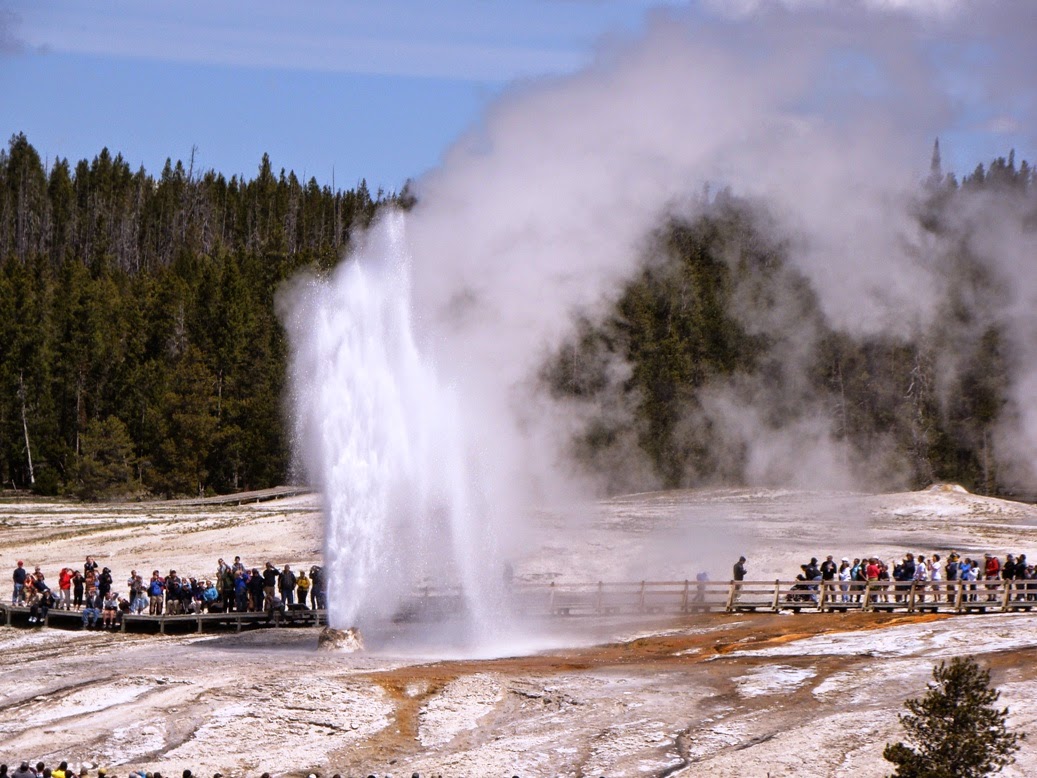 I'm going to start with the conclusion (I've highlighted some parts using the bold font):


Geological activity at Yellowstone provides no signs that a supereruption will occur in the near future. Indeed, current seismicity, crustal deformation and thermal activity are consistent with the range and magnitude of signals observed historically over the past century [Lowenstern et al., 2006]. Over the past two million years, trends in the volume of eruptions and the magnitude of crustal melting may signal a decline of major volcanism from the Yellowstone region [Christiansen et al., 2007; Watts et al., 2012]. These factors, plus the 3-in-2.1-million annual frequency of past events, suggest a confidence of at least 99.9% that 21st-century society will not experience a Yellowstone supereruption. But over the span of geologic time, supereruptions have recurred somewhere on Earth every 100,000 years on average [Mason et al., 2004; Sparks et al., 2005]. As such, it is important to characterize the potential effects of such events. We hope this work stimulates further examination of ash transport during very large eruptions.

The reason I am doing so is because the media is reporting on the body of the report that came out recently concerning the possible effects of a major caldera eruption at Yellowstone National Park. That means we are getting the usual headlines like:

Eruption of Yellowstone supervolcano could spell the end of the US


For the most part, the reports themselves aren't too bad (there ARE exceptions). The thing is, we've always known that a Yellowstone caldera plinian supereruption would be devastating. That's old news. The purpose of the research was to model the potential effects of such an event. I get that disaster and omens of disaster are what sell newspapers or put eyes on advertising, so headlines go over the top, just like they always have. But this approach leaves the readers with the wrong impression, and they are going to worry about whether eruptions of Yellowstone need to be added to their fears of terrorist attacks, Megalodon shark attacks on their Caribbean cruise, or whether vaccines cause autism. In other word, useless levels of stress based on incorrect or blatantly wrong information.

I want to send kudos to a couple of media outlets with less sensationalistic headlines, such as those from the Billings Gazette: Researchers predict ash fall if Yellowstone supervolcano erupted or the Daily Digest: New computer models show likely fallout of a volcanic eruption in Yellowstone.
These kinds of headlines actually communicate accurate information without the terror-inducing yellow journalism.

This report from the U.S. Geological Survey serves a useful purpose. It is part of the kinds of research that can help cities, states, and nations plan for and cope with natural disasters when they occur. The authors were careful to state in their conclusions the extreme unlikelihood of a rhyolite caldera eruption, but their computer model might be useful in predicting the effects of lesser eruptions elsewhere in the world, eruptions that are far more likely.

How about the same kind of report on Long Valley in Ca? I guess its just not as well known. Its major eruption was in the same time frame as the last major Yellowstone eruption. Model the Bishop tuff and see what the results are. (Of course the effects greatly depend on the wind that day, as if an onshore wind is blowing, most of the ash would fall in the empty regions of Nevada and Utah.

Not only is Long Valley of roughly similar size and similar timing of "great" eruptions, ongoing activity is much higher than Yellowstone, with some volcanic activity only a few hundred years ago, instead of 70,000 years, the last time lava flowed at Yellowstone.