Vagabonding across the 39th Parallel: A Canyon Along The Colorado River? Really?

A few weeks ago I was writing about my summer vagabonding along the 39th parallel as if it were a fresh memory of a just competed trip. Now, three weeks into a new semester, I find myself remembering the trip as a dim, distant recollection of a gypsy-like life without responsibility. What a difference working again makes (but I'm not complaining about working!).

The Colorado River and its tributaries are life to the Southwest. It is the only major water source for Arizona and Nevada, and is a critical component of the water used by California, Colorado, Utah, Wyoming, and Northern Mexico. Any discussions of water allocation and the effects of ongoing climate change on the river are political minefields. 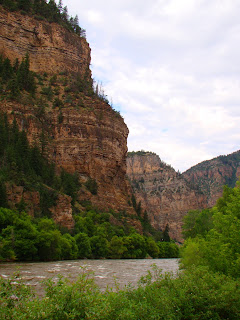 To many people, though, the Colorado River means the Grand Canyon in Arizona. Those who are more familiar with the area realize the Colorado represents many canyons. The river drainage crosses so many unique landscapes that no single description can characterize the river: Cataract Canyon, Black Canyon (two of those, one in Colorado on the Gunnison tributary, and the other downstream of Lake Mead), Flaming Gorge and Lodore on the Green River tributary and many others. 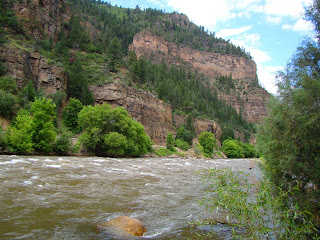 Upstream of Glenwood Springs the river is emerging from the foothills and ridges of the Rocky Mountains, and the river is forced to flow through yet another spectacular gorge, Glenwood Canyon. Millions of travelers have traversed Glenwood through the years, but not me. The rules we set for ourselves on this trip were to see as many new things as possible, so Glenwood showed up on our vagabonding itinerary despite being famous and heavily traveled. It was quite a sight.

I'm committing one of those odd little sins of geography that Glenwood inhabitants might take umbrage to. I'm going to suggest that Glenwood Canyon reminded me of the Grand Canyon, only with forests. In my defense, let me point out the particular similarity. Because the canyon was forced by erosional and tectonic circumstances to cut through a plateau, it carved deep into the crust, deep enough to expose some of the metamorphic basement rocks that are among the oldest found anywhere in the American Southwest. The gneiss and schist exposed here are 1.7 billion years old. The rocks were beveled by intense erosion and later covered by sedimentary rocks that are around 500 million years old (an unconformity). The higher cliffs are composed of Paleozoic sedimentary rocks. This is the same relationship seen in the deepest part of the Grand Canyon. 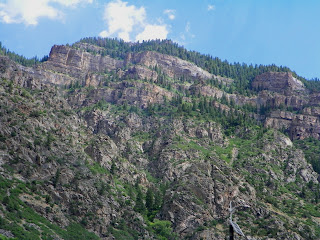 Gneiss is one of the most beautiful of rocks, with an astounding variety of minerals, depending on the circumstances under which it formed. The rock found in Glenwood is highly contorted because of its origin deep in the crust where it was put under tremendous pressure, and heated (almost to the melting point). It has been intruded by granite and pegmatite veins, beautiful rocks in their own right. 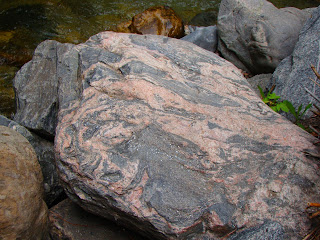 In Colorado, people traveling in an east-west direction have a problem. It's called the Rocky Mountains. Passes below 10,000 feet are practically nonexistent, other than those on Highway 40 in the northernmost part of the state. Despite the deep narrow nature of Glenwood Canyon, it is part of one of the most important transportation corridors in the state. Trains and autos have used the canyon for more than a century, but the road that was present was not a high-speed modern highway, despite being part of Interstate 70. That changed in the 1990s. 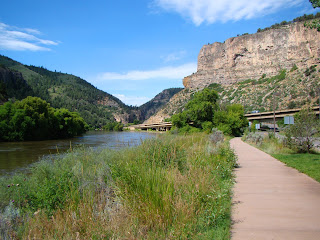 If you think the road seems highly engineered, you are right. No one could mistake the gorge for a pristine wilderness, but a normally configured freeway would have involved a large number of huge roadcuts and unsightly scars on the canyon walls. A great effort was expended to minimize the disruption to the canyon.
There are an unusually large number of rest areas for a 12 mile stretch of road. There are four, including the rather creatively named "No Name Rest Stop" at the western end (and in the first photo). The parking areas provide trailhead access to a number of interesting destinations, including Hanging Lake, an unusual travertine terrace. Unfortunately we didn't have a chance to check it out on this trip. 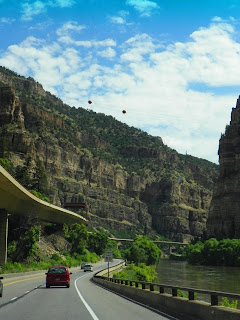 The Colorado River was in a bit of a rage. It has been high as a result of near-record snowfall and a late spring, but in the middle of July it was actually covering the concrete bike trail and stairwells along the river. We were about to experience part of the reason; there had been some heavy thunderstorm activity for a few days. It has been a crazy year in so many ways. 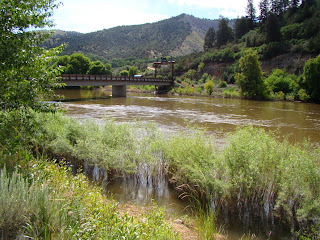 The Colorado also cuts through basement rock in Westwater Canyon near the Colorado-Utah border. The Uncompagre Plateau uplift brings the basement up to where the river can gnaw on it. But since the Uncompagre has been high ground during the Paleozoic and again recently, there's a major unconformity and Jurassic rocks directly overly the Precambrian gneiss and schist. There's no Paleozoic rock at all, so it's quite unlike Glenwood Canyon or Grand Canyon.

Only whitewater craft get through the deepest part of Westwater. The railway gets close and I-70 is a few miles north.

How I envy your road tripping! I really enjoy both your posts and your photography. Thanks and safe travels!

Your story makes me want to plan a trip to follow the Colorado River. And Glenwood does look like the canyon, but with more trees.

Having lived in Glenwod Springs for 10 years, I really enjoyed this post.

Precambrian basement rock can also be seen west of Grand Junction, where it sits beneath Chinle Fm. in a great unconformity, on a fault, right at the base of Colorado Nat'l Monument.

Ah, home. One of the more interesting things to note about the Colorado River as it flows through the Glenwood area is that it is fed by numerous hot springs which make it extremely saline. Before you get to the canyon, it's interesting to view Burning Mountain near New Castle, the site of a coal mine that's been on fire since the 1890s. Another interesting thing to note as you pass through is that cute little volcano remnant at Dotsero. If you're ever in the area again you can use my home as a base to explore.