You Betcha, it's Breccia: Some Otherworldly Pictures

I'll be back to vagabonding in the next few posts, but it's a busy week and I have lots of photos to work through. In the meantime, I have two photos that crossed my desk this week, one a few years old, and one that has been recently acquired. The thing about them is that they both made my jaw drop, even though without context they look...almost mundane.Take this first picture, for instance. It looked to me like the surface of a mudflow in a desert environment, judging from the lack of finer sediments, and the relative sheen of the rock surfaces. A simple explanation is that it is an example of desert pavement with desert varnish, taken by someone who was using some archaic black and white film (does anyone know what film is? I have vague memories...).

But it's not. Not even close...close to Earth, that is. This is the surface of another object in the Solar System, and it's not a planet either. It's an asteroid called Itokawa. I somehow missed these pictures in 2005-2006 when the Hayabusa satellite arrived there, landed, and returned to Earth with some small particles of the asteroid (it arrived back in June of 2010). Asteroid Itokawa is small (about 600-700 meters long), and is barely a single object. It is a fairly loose agglomeration of chunks and pieces of rock...a space breccia

I appreciate blogger Glacial Till, who brought this picture to my attention last week (by coyly putting a picture of Titus Canyon in Death Valley to distract me). For more info on the Hayabusa mission to Itokawa, check out this site.

The next picture is similar; it could have been taken in practically any desert environment. It looks like some wind has cleared off another piece of breccia of some sort. What's special is that this rock isn't on Earth either, it's on Mars. The Rover mission, slated to last for 90 days, has been continuing for seven years. This picture is hot off the press, taken just a short while ago (September 7) by the Opportunity Rover on the edge of Endeavour Crater. You can read a NASA press release about the rock here. The rock is called Chester Lake. 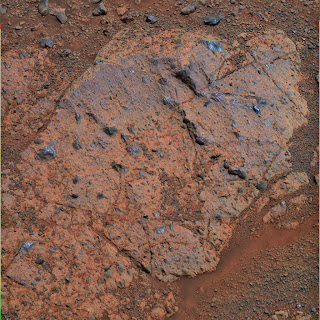 I can hardly speculate on the composition of the breccia. The Rover is doing some serious analysis of Chester Lake because it is an outcrop of bedrock, rather than crater impact debris.

The Rover, like any geologist working an outcrop, has to look up once in a while to gain some context for the area they are working in. Here is a shot of the view from the site. The researchers have to be very selective about which rocks to test. I feel such a powerful desire to wander across this landscape, picking up and collecting all kinds of samples. Many thanks to Joel Hagen for bringing these photos to my attention.

I can't begin to describe what incredible times we live in. When I was a young boy, I was fascinated with astronomy, and my most valued possession was a small telescope. Mars was such a compete mystery! It was a little red dot in my telescope, and little more in the largest telescopes in the world. We could barely distinguish surface details on the planet, even though there were those who were sure they could see canals on the surface, evidence of some kind of civilization (who invaded us in the War of the Worlds and in Buckaroo Bonzai). I was a college student by the time our satellites started sending clear pictures of the surface, and today we are trolling about on the surface. We carry incredible pieces of technology in our pockets and purses that allow us to gaze on the surface of another planet (when we can pull our attention away from cute cat pictures!). Incredible times.
Posted by Garry Hayes at 9:02 PM

Even my high school students are so spoiled. They take Google Mars and Google Moon for granted. Unreal leaps and bounds. Maybe one of my students will actually be able to go to the moon or Mars in person one day.

As for the second photo (Chester Lake),I'm not quite buying that it's a breccia. To me it looks like an iron-rich rock that has been differentially eroded and then covered with wind blown, rusted dust filling-in the low spots. The false color image on NASA's website seems to really make that clear to me. But then again, I am no field geologist, nor do I work at NASA. Can't wait to see what future studies reveal!