Searching for the Perfect Volcano...And visiting some state parks for the last time 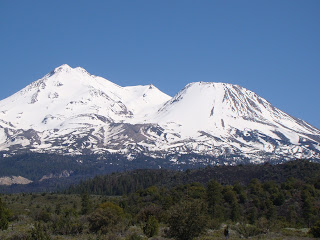 It's September, the start of a new semester, and time for a last stab at field work in the high country! I'm heading out with one or two dozen students for an exploration of the California Cascades, the southern end of major chain of volcanoes that includes such luminaries as Mt. Rainier, Mt. St. Helens, Crater Lake, and Mt. Hood. We will be taking an in-depth look at Lassen Peak, Mt. Shasta, and Medicine Lake Highland, some of the most intriguing volcanoes to be found anywhere.

We will also be taking a last look at a couple of California's state parks that are slated to close within a matter of weeks. For the lack of less than a dollar from each resident of the state, we are losing 70 of our state treasures, including Woodson Bridge State Recreation Area, and Castle Crags State Park above the Sacramento River in the Klamath Mountains. I hope to be posting some new pictures of what we are about to lose of our state heritage because of the dereliction of duty by our state legislators.

I'll be out of touch for a few days, but you might watch for updates on Twitter: @Geotripper.
Posted by Garry Hayes at 12:31 AM