The Other California: Limekiln, Part 3 - A Park Without a Friend 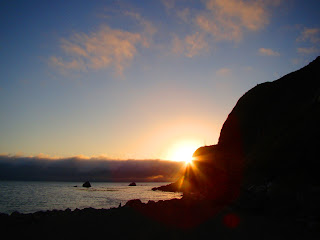 Limekiln State Park is closing. As soon as next month, you will not be able to visit this precious place. For the lack of $22 million dollars, 70 of California's state parks will be closing down. That's an average of just over $300,000 per park. The math is appalling: a single penny from each resident of California could keep Limekiln State Park open. A mere 70 cents or so from each resident could keep all 70 parks open. But our legislature couldn't do it. Our legislature, because of a minority party so intent on never raising taxes for any reason at all, would not even let the people of California choose for themselves whether to keep the parks through the referendum process. I am ashamed of this legislature, and I am ashamed that I am represented by a senator and an assemblyperson who are part of the Republican party. 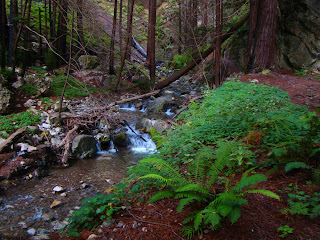 What is it worth to these people in the legislature to make sure their rich benefactors don't pay a few extra dollars in taxes? Is it truly so important to them that they would destroy the things that can make California a livable place?  The education system of our state? The safety net for the most vulnerable of our citizens, the poor, the sick, the infirm? Clean air and water? The careers of teachers, nurses, police and firefighters? I'm heartbroken and angry. 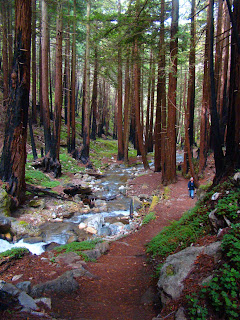 There are some things you can do for the parks. Assembly Bill 42 has passed the state legislature and is headed to Governor Brown's office. It will allow partnerships with non-profit organizations to keep some parks open. A few of them anyway; you can sign a petition here asking Brown to sign the bill. You can also support the California State Parks Foundation. They've been doing good work.

I fear that Limekiln is a park without friends. There are certainly people who love the park (including some recent commenters), but it doesn't sit next to any urban centers where volunteers can easily donate their time. It's isolated and wild, a feature that makes it a wonderful place to explore, but it doesn't get enough visitors to support a "Limekiln State Park Foundation" as far as I know. No, I think this park will be simply swept away for budget considerations, and we will all be poorer for it.

And a penny from everyone was all that it needed....
Posted by Garry Hayes at 1:29 AM

That particular petition would not allow me to sign and send with an out of state address, although they have other petitions, and one of them also was directed to Jerry Brown.

I certainly don't agree with the closing of parks. But as long as they don't allow development there it will sit quiet and flourish.

Most politicos should go hang themselves. We'd be better off with nobody than who we currently have.

I fell in love with the Big Sur area in 1974. After a too-long absence, I am making a trip there next week, and one of my must-visits is Limekiln State Park. I remember it as a beautiful, unspoiled gem tucked away in the redwoods, truly awesome in the true sense of the word; it inspires awe and wonder. Sadly, these kinds of places don't inspire the people with money; who want golf vaca's with wi-fi for their myriad electronic gadgets so they can pretend they're on vacation while never severing the technological umbilical that keeps them tethered. It's a sad thing to lose access to such a beautiful park when such a paltry amount would save it.

I believe there is enough interest in starting a Friends of Limekiln State Park, a non profit to work with State Parks to keep this park open at least part time. I live in SLO County and know plenty of people who cherish this special place. I am also on the SLO Surfrider Board and would like to examine the State closing down coastal access at this location. I have been involved in starting other non-profits and don't feel this is to far from San Luis Obispo to create awareness and concern about this magical place. If interested in starting this drop me a line at paccruz@paccruz.com. Thanks, Dave