The Other California: Limekiln State Park, Part 2 - What lies upstream?

The Other California is my on-again/off-again long running series on the fascinating corners of California that don't always make onto the postcards. The last post concerned a little-known state park on the Big Sur Coast, Limekiln State Park. We had a look at the small bouldery beach under a beautiful bridge on Highway One. We ended up wondering what lay upstream. 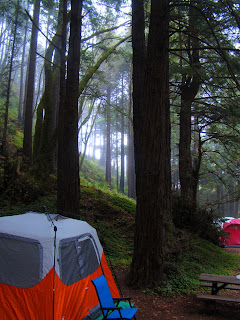 The first thing one notices is the redwood forest just a few yards upstream, and the park campground. The redwood grove here is one of the southernmost of the species, and according to some sources may even be a distinct subspecies. Many of the trees were cut in the 1880s (see below), but the forest has recovered nicely, and the campground is in a wonderfully scenic setting among tall trees and a loud babbling creek. Some areas of the park were damaged in the Chalk Fire of 2008.

The campground is decidedly different than most state park campgrounds. Space is at a premium, and sites are very close to each other as if planners were trying to stuff as many spaces as possible in the limited flat ground. This is a clue to the heritage of the park; it was once privately owned (one hiking guide calls it "Big Sur funky"). Limekiln only became a state park in 1995.

We had a sweet little experience on our visit. We were foolishly vagabonding, hoping to catch an empty camping spot on the Big Sur Coast...in the summer. Talk about a hopeless quest! The hosts at the camps farther south laughed when we asked about open spaces or cancellations. The young man at the Limekiln station looked at our small car, and suggested we check campsite 26 1/2, a campsite that doesn't actually exist, much like Harry Potter's King's Cross train station gate 9 3/4. There was no parking, and barely enough space for the Taj MaHayes tent, but it worked and we had a delightful night. Such a crowded campground has a potential for much noise and mayhem, but the night was quiet, and one of the darkest I can ever remember experiencing. During a late-night stroll, the only light in the whole camp was a single candle on a table, and the dim light flickered mysteriously in the trees up above. 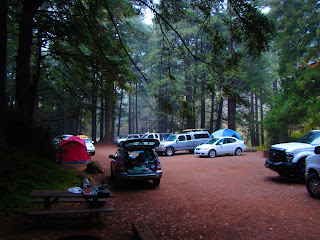 As a new state park, the hiking system is not highly developed, but the trails are quite pleasant to explore. One trail follows the West Fork of Limekiln Creek to the limekilns. The park preserves exposures of Mesozoic granitic rocks and older metamorphic rocks, including marble. Marble is metamorphic limestone, which is an important component of concrete and cement. It must be heated to become lime, and that is what the limekilns are all about. 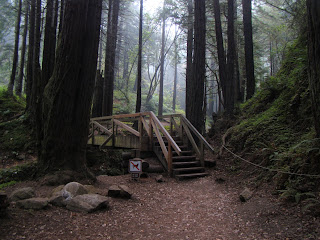 For three years starting in 1887, a group of kilns used locally cut redwoods to bake the limestone, and the lime was transported to the beach. Ships picked up the barrels of lime for use in Monterey and other nearby towns. 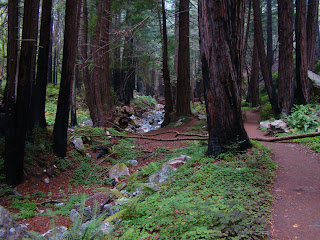 I was expecting brick kilns, like those I have seen in Death Valley and the Owens Valley, but these kilns were made of iron. They are slowly being reclaimed by the forest. There are even redwoods and ferns sprouting on the roof of the ovens. The structures were just a bit eerie to me. 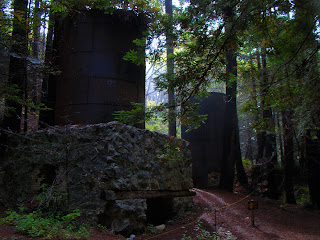 Another trail rises gently through Hare Creek. The water was sparklingly clear, and there was plenty of it, despite the late August date. The deep blue pools were inviting. 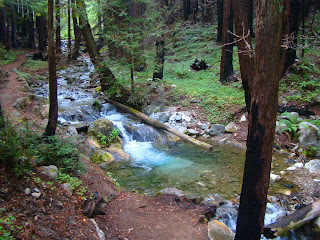 I've saved the best for last. Off the Kiln trail is a side trail to Limekiln Falls. It's one of California's unique treasures. The falls are about 100 feet high, and cascade down a cone-shaped edifice that is different than the usual cliffs found in the state. Flowing through the marble, the upstream portion of the creek picks up calcium carbonate (the mineral calcite), and some of the mineral precipitates out of the water while evaporating on the flight down the falls. I'm guessing that it is a similar phenomena that has produced the beautiful Havasu Falls in Grand Canyon. 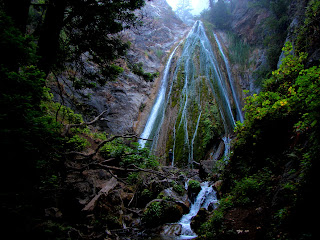 The falls are one of the prettiest sights I've seen this summer. So, here is a little known state park that contains a beautiful waterfall, an inspiring redwood grove that is one of the southernmost in the world, a world-class beach, interesting metamorphic and plutonic rocks, and which includes a pleasant creek and cozy little campground. Doesn't it sound like a wonderful place to visit? 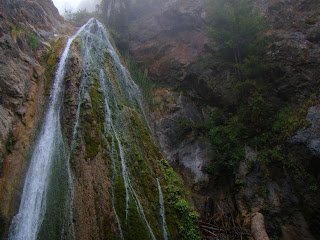 Well, you can't. Not anymore. As early as this October, Limekiln State Park will no longer be accessible to any of you. Find out why in the next post...
Posted by Garry Hayes at 7:01 PM

As I said in the first post on the subject, a great park with interesting history and a wonderful waterfall. It is truly disgusting that we'll be closing it, as well as a number of other unique and beautiful parks (Malakoff Diggins is one that really sticks out to me).

Must be one of the many parks being closed in CA. How sad.

The travertine deposits are much like the Havasu falls, and other falls I've seen in the canyon.